Cyborgs in the Club

Arca and the digital boundary 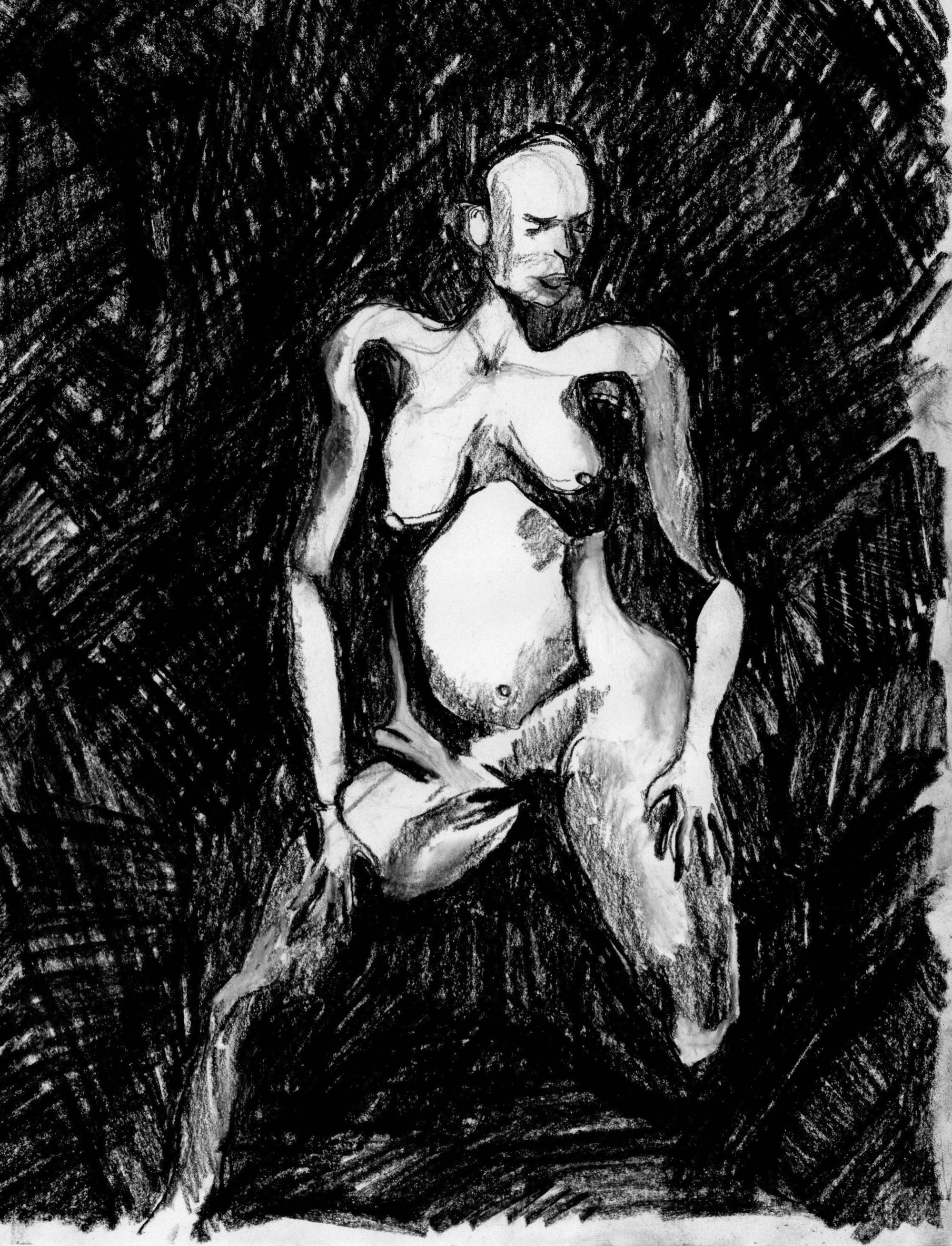 On November 1, Venezuelan electronic musician Arca released his debut album Xen, named for Arca’s alter ego, a genderless—though feminine—figure whom he first developed while a closeted child in Caracas. The album is unlike any of the vocal-heavy material Arca produced before, eschewing that familiar territory in favor of letting his machines speak for themselves. The album’s single, “Thievery,” is a glitchy, stumbling tune that relies on a chorus of synths, something like a Macbook screaming for help. A music video accompanies the single, featuring a nude, animated humanoid, presumably Xen, dancing under a flickering light. Throughout the video her dancing is in sync with the song’s tonal chaos, and yet she seems distinctly separate from the song. Her feet move but she doesn’t touch the ground; her dancing is just slightly off, not quite dancing with the song, but in response to it. One can almost see the algorithm running behind her emotionless face. Xen is distinctly, and intentionally, the product of a human hand. The video awkwardly reconciles the humanness of the songs effect—Xen’s full body contortions and extensive gyration—with the artifice of her existence, for she is also product of a computational model that cannot emotionally experience music, even if it features the shrieks of her fellow computers.

Music has an inherently physical quality experienced through the body. Electronic musicians have long been interested in how the genre’s technological source and sound is placed within the context of music as a human pursuit. In The Players Passion, Joseph Roach—a theater historian who has written on the relation between the performing arts and science—that during the Scientific Revolution, “the words mechanical and natural did indeed become synonyms.” However, with the dawn of modernity, this Cartesian faith in reason began to fail, and with it went the idea that humans, like machines, were functionally perfectible. This failure posed the question: what is the nature of human-machine relations, and what will it become as we become more and more dependent on machines?

Electronic music was born during the 20th century in the midst of this grey area of machine/human relations. Some, like Italian Futurist Luigi Russolo, believed that machinery offered the possibility of the next great leap forward in music. In his “The Art of Noise manifesto,” Russolo writes “Noise was really not born before the 19th century, with the advent of machinery. Today noise reigns supreme over human sensibility ... Nowadays musical art aims at the shrillest, strangest and most dissonant amalgams of sound. Thus we are approaching noise-sound. This revolution of music is paralleled by the increasing proliferation of machinery sharing in human labor.” Russolo takes the rise of the machine in stride and sincerely celebrates the many possibilities offered by technology in the world of music. However, in light of the assorted tragedies of industrialization—wage slavery, pollution, landscape destruction—this take on the future of technology and art is somewhat utopian. The idea of machinery “sharing” in labor with humans is contrasted by Marshall McLuhan, writing in Understanding Media, “human beings are the sex organs of the machine world.” McLuhan’s anxiety is founded in the belief that the rapid rise of machines foretells a future in which humans are rendered unnecessary. That soon we will simply be used to help machines reproduce until they can do it themselves. This view is found in the electronic music that first crept into popular consciousness through science fiction movies and radio shows. The creepy pitch-bent sound of early synthesizers gave the 1950s the sound of the future. At the time, electronic music reflected a society simultaneously obsessed with new technologies and fascinated by dystopian futures of technological excess. Emerging in an industrial capitalist world, electronic music is inextricable from the material conditions of its production. A response to our mass-manufactured technological experience, these fears are alive today in the capitalistic aura surrounding the countless dystopian films—Blade Runner, Robocop, I, Robot, Rollerball,

Antiviral, etc.—that feature corporate tech-dominated futures. In the tradition of Western culture, “the relation between organism and machine has been a border war,” says Donna Haraway in A Cyborg Manifesto. Serving as “an argument for pleasure in the confusion of boundaries and for responsibility in their construction,” Haraway’s manifesto is a case for blurring the line between man and machine in the hope of solving this utopian/dystopian technological dichotomy. The Xen whom Arca constructs on this album is a cyborg in the sense expressed in the Cyborg Manifesto: “creatures simultaneously animal and machine, who populate worlds ambiguously natural and crafted.” This album pulses with life and yet only contains sounds created by machines. In the video, Xen’s body is obviously human, but her exaggerated anatomy suggest either digital or surgical manipulation. While we tend to think of cyborgs as humans with mechanical supplements, Xen serves as an example of the cyborg as a computer with a human supplement. The boundaries that interest Haraway—organism/machine, physical/nonphysical, identity/affinity—are the same as those explored on Xen; the album is a celebration of pleasure in confused boundaries. The line between the self and the machine is blurred, as is that of self and imagined-self. Xen and Arca—both names assumed by a real person—are the figures that populate this ambiguous world. Arca accesses Xen through his machine, and in the process Xen assumes the voice of the machine, screaming out from the dark via sine waves and mp3s.

In an interview with The Fader, Arca reflects, “I loved the idea I could let myself operate in openness to both science and superstition, and I think placing myself squarely in the middle of those things is where I feel happiest. Allowing for some form of magic. We don’t completely understand everything in nature.” Arca’s music explores the tension between the conception of technology as something mystical qua human, and that of technology as rooted in binaries, inseparable from its analytic, computational, lack of dynamism. Song titles like “Family Violence,” “Lonely Thugg,” and “Wound” motion toward a ferocity that is not found in the songs’ lyrics, because there aren't any. While the album is named after Arca’s alter ego, Xen does not feature a single vocal performance or sample. Rather, Arca’s use of the pitch wheel serves to create a voice for Xen. In returning us to a trademark of the digital sound, the pitch bend is still creepy and unsettling, but now, the sci-fi sound has been re-contextualized among symphonic string synths that regularly fall apart, rhythmic chaos, and much sadness. The aesthetic of 1950s cold, calculating, spooky machine has been replaced by machines that make mistakes and feel regret for doing so.

In a review for The National, Andy Battaglia recalls an early version of the album sent to journalists, which featured a version of the song “Sisters.” A glitch somewhere along the line had severely damaged the file, and the product was “disorienting and outlandishly abstract.” The mistake went unnoticed for months as the listeners assumed that an artist’s intent was behind the chaos. Similarly, in the video for “Thievery,” the lights flash on Xen’s body at the 2:26 mark to reveal a collection of bulbous growths on her upper thighs and groin. Looking much like the special effects in Cronenberg’s The Brood, the moment lasts less than a second and poses the question: is visual artist Jesse Kanda’s intention behind the deformity, or is it the product of an animation program gone terribly wrong? These two instances of questionable artistic intent return us to Haraway’s interest in boundaries. Our focus on seeing artists as genius creators prevents us from raising questions of how we privilege intention in aesthetics over material consequences. Is digital music created on machines, with machines, or by machines? Is Arca a musician in the traditional sense, or a curator playing on the disintegrating boundary between human and technology? At what point does a corrupted file cease to belong to the artist who originally created it, and become the intellectual property of the machine that generated it? This album engages with blurred boundaries not in pursuit of answers, but for the sake of asking more questions. As the questions pile up, the line only blurs further. As Haraway writes, “This is a struggle over life and death, but the boundary between science fiction and social reality is an optical illusion.” On Xen, technology is vivified. These questions point toward this optical illusion, and the result is that the cyborg Xen becomes a product of social reality. The album is intent on the creation of life—not a biblical, ideal life—but scary, hectic, real life. Much like our own lives, cyborg life is full of emotional imbalances, algorithmic errors, corporeal flaws, and beauty.