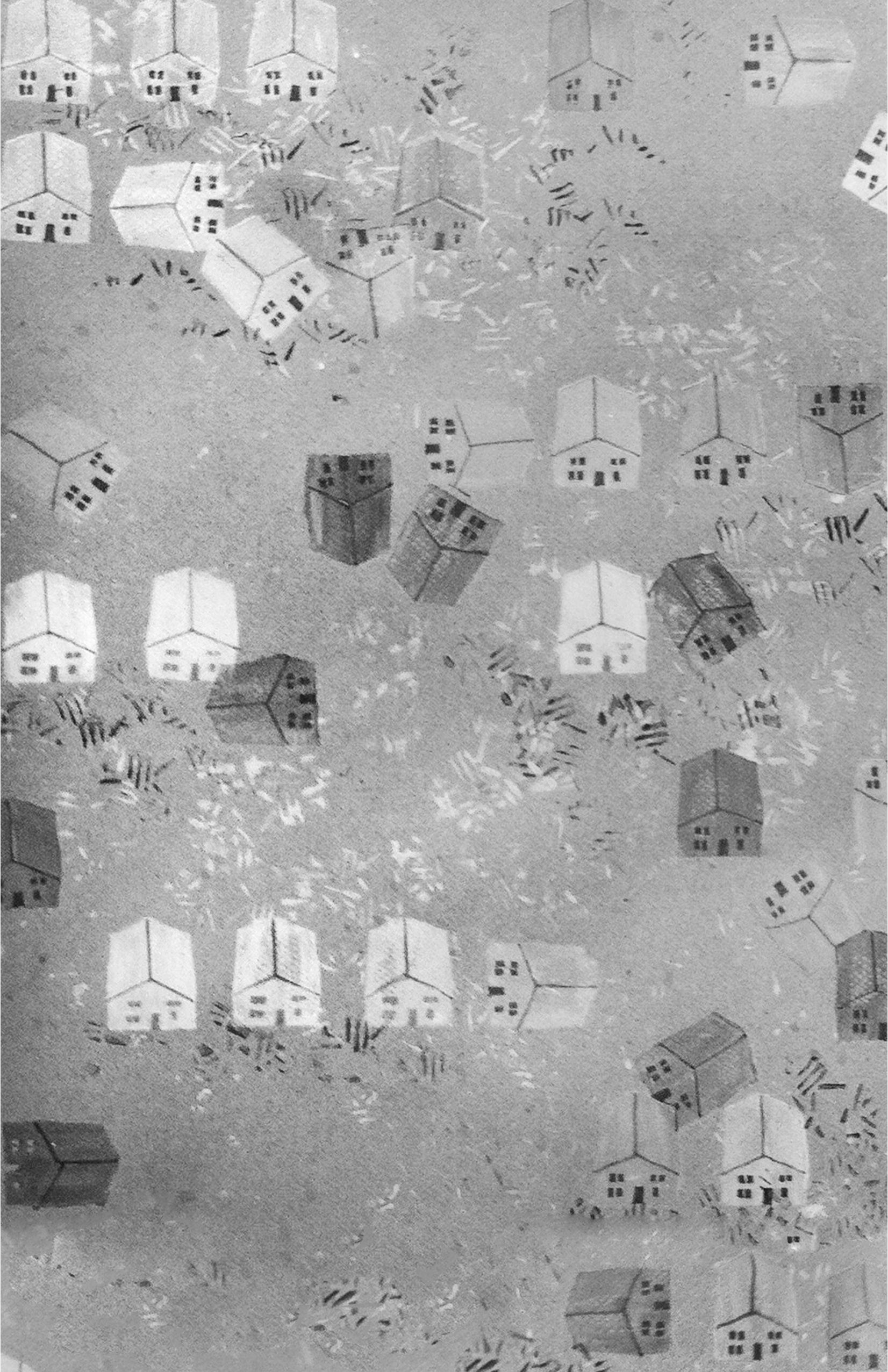 Last month, I biked down to Direct Action for Rights and Equality (DARE) at 340 Lockwood Street for a public forum on Fannie Mae and Freddie Mac’s foreclosure and eviction policies. Unfamiliar with housing issues in the city, I wasn’t quite sure what to expect when I got there. Walking in the door, I was greeted by a friendly, chatting crowd, members of which promptly directed me to an array of food that people had brought. I grabbed a bite and took a seat surrounded by signs ranging from “Housing is a human right,” “Reduce principal now!” and “We shall not be moved!” A large banner promoted the Tenant and Homeowner Association, a subsidiary of DARE that supports people fighting foreclosure and eviction from their homes. Among the people advocating for a better housing system, and struggling with the one in place, were born Americans, immigrants, Rhode Islanders, Massachusetts natives, Army veterans, and Native Americans. The event was bilingual, with a translator interpreting for Spanish speakers in the audience. Many walks of life were represented; all of them are affected by the ongoing wake of 2008’s housing crisis. People sometimes speak about 2008 as if it’s history, but as one man remarked, “The crisis is far from over.” At the front of the room sat the night’s main speaker: Nick Retsinas, a Providence resident and Harvard professor, present in his capacity as a member of the board of directors of Freddie Mac.

Fannie Mae and Freddie Mac are Government Sponsored Enterprises (GSEs) established to expand the secondary mortgage market in America. Fannie Mae, whose full name is the Federal National Mortgage Association, is a byproduct of the New Deal era; the smaller Freddie Mac (Federal Home Loan Mortgage Corporation) was established in 1970. These GSEs created liquidity by purchasing mortgages from lenders, which allows those lenders to hand out new loans to new homeowners. Simply put, Fannie and Freddie are huge mortgage-trading enterprises, whose ties with the federal government lend them extra security in the ever-fluctuating world of finance. The enterprises do not create mortgages, but rather purchase and underwrite loans originated by institutions like banks and credit unions. Thus, they serve as middlemen between these institutions and homeowners. Together, Fannie and Freddie purchase or guarantee 40 to 60 percent of all mortgages originating in the United States.

Despite Fannie and Freddie’s pervasiveness, most of the community members in the room first learned about these institutions when they got served with an eviction notice, courtesy of Freddie or Fannie as plaintiff. The inaccessible language these institutions speak is a huge problem in this country. Many of the foreclosed or evicted persons I heard speak at the forum could have avoided their housing nightmares had they been more financially literate. But as first-time homeowners, foreign-language speakers, or simply trusting people, they fell prey to predatory lenders and got lost in the labyrinth. People weren’t just falling through the cracks in a flawed system—they were being pushed into them deliberately by opaque and misleading practices.

One man from Brockton, Massachusetts, who was in the middle of a battle for his home, shared his story at the forum. After expressing his amazement at how many people are in similar situations, he described how predatory lenders helped to dig his family into a huge financial hole:

"I’m a veteran, I served the country of the United States of America for 10 years, and I’m finding out: I can’t keep my house. My wife got predatory loans. All she wanted was to take out money to fix her roof, she had water leaking in her bedroom, in the house, just a leak—and predatory loaners came and told her 'Take out $35,000! To fix the roof!' And then, all we needed for the roof to get fixed was only $4,000. But, oh no, 'Take out 35!'—and she doesn’t know, she says, 'Ok, but that sounds like a lot because I already spoke to the people who are going to fix the roof, and they said all they need is four thousand.' They said, 'Oh no, you’ve got to pay the attorney’s fee...' And she’s like, ‘I didn’t know I needed an attorney to fix the roof.' 'Oh yeah! You know why...' These are the tricks of the trade that they use on people who are first-time homeowners, they don’t know."

People like this seek out solutions from people willing to work with them, despite trouble meeting their financial obligations. They hope for loan servicers who understand the realities of unemployment and who are willing to reflect critically on what makes sense for a bank and a client, rather than simply applying rigid policies. The same man who spoke about his roof described how at one point how he and his wife owed their bank just $15,000, and they were able to come up with two-thirds of this amount, but the bank refused to work with them. Instead, they coldly informed him that they were not playing around, and that they wanted the house.

Nick Retsinas, despite representing one of the institutions that has been a nightmare for so many, could not offer practical solutions. It was a recurrent theme that while Retsinas could relay these peoples’ stories to the powers that be, and while he could do his best to ensure that Freddie implemented the policies it espouses on paper, only the director of the Federal Housing Finance Agency (FHFA) has real decision-making power when it comes to issues they care about. When Retsinas’ understanding of Freddie and Fannie’s policies clashed with their realities, there was little to say except: “I can’t tell you why, I don’t know.”

Freddie and Fannie came under the conservatorship of the FHFA after the 2008 financial crisis, during which both companies collapsed. At that point, these quasi-government agencies, which had been built as private corporations with government sponsorship, were taken over by the government. Now, the United States Treasury owns 79.99 percent of their stock and has put it under the control of the FHFA. The director of the FHFA makes all decisions regarding Fannie and Freddie’s policies on principal reduction and similar issues. So Retsinas, although on Freddie’s board of directors, was present only as a sympathizer, a speaker, and a listener.

Two issues in particular are important to those fighting for their houses: no-fault evictions and principal reductions. No-fault evictions are when foreclosed tenants or homeowners are evicted from their homes, despite their ability and willingness to pay rent to the foreclosing bank. Both Rhode Island and Massachusetts have laws that prevent no-fault evictions, but Fannie and Freddie continue to evict residents, explaining that state laws do not bind them in so far as they are appendages of the federal government. Steve Meacham, an organizer-activist at the non-profit City Life, which works to educate homeowners and fight for better housing policy, notes that he sees 130 people coming in weekly with foreclosure and eviction issues, many of which are at no-fault, and many of which are at the hands of Freddie and Fannie. Retsinas, taken aback, responded, “It is my understanding now that both Fannie Mae and Freddie Mac offer to every existing tenant the ability to rent; I am not aware of no-fault evictions, to your point. I am aware under the Freddie Mac program, which I can speak to definitively, that they offer the rental option, but that it has to be rent at fair market value.” Evidently, and regrettably, this policy has not been enforced on the ground. Retsinas and Meacham’s narratives are irreconcilable, and the 50 or so people who’ve shown up to this forum are damning evidence for the latter.

Principal reduction has sparked controversy for a few reasons. Banks have been afraid to implement principal reduction because they feel that thoughtful debt-forgiveness could easily turn into dangerous permissiveness. It’s a moral hazard not to teach a lesson to homeowners who fall behind on their payments. Then again, this logic was not applied when the federal government bailed out Wall Street, which was essentially a form of principal reduction. They were not held accountable, which is certainly a moral hazard, but their debt-forgiveness was defended on grounds of their being “too big to fail.” The narrative went that if they had been allowed to fail, the economy would’ve collapsed, and the whole country would have suffered. This is a defendable story, but the radical lack of regulation following the bailout is not, and neither is the hypocrisy that poor, working class families were, and continue to be, held more accountable than these banks. In this story, working-class families don’t seem to count as a part of the country; when they are barred from the same form of debt forgiveness offered to massive financial institutions and forced out of their homes, they are allowed to fail. “This is not the America I dreamed of,” said Ronald Ramiami, a Haitian immigrant who was deceptively convinced to purchase a house he could not afford.

Edward DeMarco, former director of the FHFA, was a staunch opponent of principal reduction. DeMarco also opposed the practice of selling properties to non-profits that would then sell those properties back to their owners at fair market value. This buy-back practice is de facto principal reduction, so DeMarco had Freddie and Fannie stop working with organizations like Boston Community Capital, even though these partnerships were working quite well for the banks and homeowners. In December 2013, President Obama appointed Melvin Watt as the new director of the FHFA. A hopeful Retsinas reported that Watt is working on pilot principal reduction and buy-back programs, although these plans have yet to be enacted. The dialogue around principal reduction is at least a step in the right direction.

Even when a homeowner cannot afford to buy back their house or rent from the foreclosing bank, there is an opportunity to create affordable housing out of the property. Non-profits are often willing to buy foreclosed properties and turn them into affordable housing for new tenants, a much better alternative than letting plots sit vacant and decay. As Rhode Island State Senator Harold Metts observed, there are houses right down the street from DARE that are foreclosed and occupied by gangbangers and heroin addicts, instead of the families that have been pushed out. This has a negative effect on the properties, along with the surrounding community. Also, after the 2008 government takeover, Fannie and Freddie were supposed to give .4 percent of their profits to the National Housing Trust, a non-profit that supports affordable housing projects. Since 2012, they have been making substantial profits; enough that .4 percent of them would have generated more than $500 million for the National Housing Trust. Unfortunately, this transaction has not taken place. As Retsinas said, it’s up to the government, and more specifically the director of the FHFA, to decide where Fannie and Freddie’s profits go.

Complexity is one of the biggest problems of our housing system. If homeowners and tenants cannot easily understand the way money flows in the housing market, they will be subject to the whim of those who do. Economic literacy should be a huge priority, along with actual simplification of the housing system. Perhaps we can integrate basic financial skills into public high school curricula, putting the ability to responsibly rent, build credit, and balance a checkbook among the canon of practical skills that we emphasize to our children. Right now, organizations like DARE and City Life fill this gap, and often they do so ex post facto, educating homeowners and tenants because bank servicers have not proven trustworthy teachers.