The faces of Thayer Street


It’s impossible to miss the changes on Thayer Street. The deep black of smooth asphalt bears the bright white stain of a new bike lane. The chain convenience store Tedeschi is gone, and in its stead sits an empty glass-walled space at the corner of Thayer and Euclid. Gone too is the group of motorcyclists that once revved their engines in the parking lot. Whizzing buzzsaws and towering cranes erect the skeleton of 257 Thayer. In front of the Brown bookstore, pedestrians drink coffee on the benches of the newly installed parklet, a symbol of the freshly sterilized environment. Though the built landscape of Thayer is changing, its culture and image have always been defined by both the businesses and the people who use the street in their own unique ways. Some of these people have been around for decades, public fixtures amid the flurry of tourists, visitors, and students. They serenade with saxophones and harmonicas. They peddle art and offer political discourse. Others are less visible, arriving at dawn seven days a week to ensure that the trash cans are empty and last night’s vomit/Nice Slice medley is not on the sidewalk the next morning. These individuals contribute to the image and history of the street itself, carving out a living while adding to the street’s legendary vibrancy. In turn, Thayer provides them with a space to perform, interact, create, and learn.

Though steady streams of pedestrians pass these individuals on their way to class, work, meals, and bars, few have stopped to have a conversation. To understand the different ways individuals experience Thayer Street, we sat down with José, Maurice and James—an artisan, a musician, and a city worker, respectively—all long time mainstays of the corridor. Through these conversations, we learned about their history with Thayer and what the street means to them on an economic and personal level.

While seeking out individuals to talk to, we noticed that those who visibly work on Thayer Street are overwhelmingly male. Mary, a homeless woman who used to frequent the terrace next to Ben & Jerry’s (once Symposium Books), confirmed that the street was not a place where she felt safe. She experienced harassment from pedestrians and police alike and had been physically attacked by law enforcement on multiple occasions. Her interactions on the street provide an example of how different people experience and utilize the space.

While most people spend money on Thayer Street, there are those who use the public space as a way to generate income. As Thayer continues to change, it’s unclear whether some of these individuals will be able to use space in the way that they do now. Even with his permit, José has been asked by law enforcement to relocate on multiple occasions. As Thayer continues to experience cosmetic overhaul, Maurice may be forced to take his harmonica elsewhere. With new developments aimed at students and big spenders on Thayer, those who make money without storefronts on Thayer may be at risk of losing both their livelihoods and their means of selfexpression and fulfillment. Though these individuals shape the image of Thayer, their stories are rarely heard. 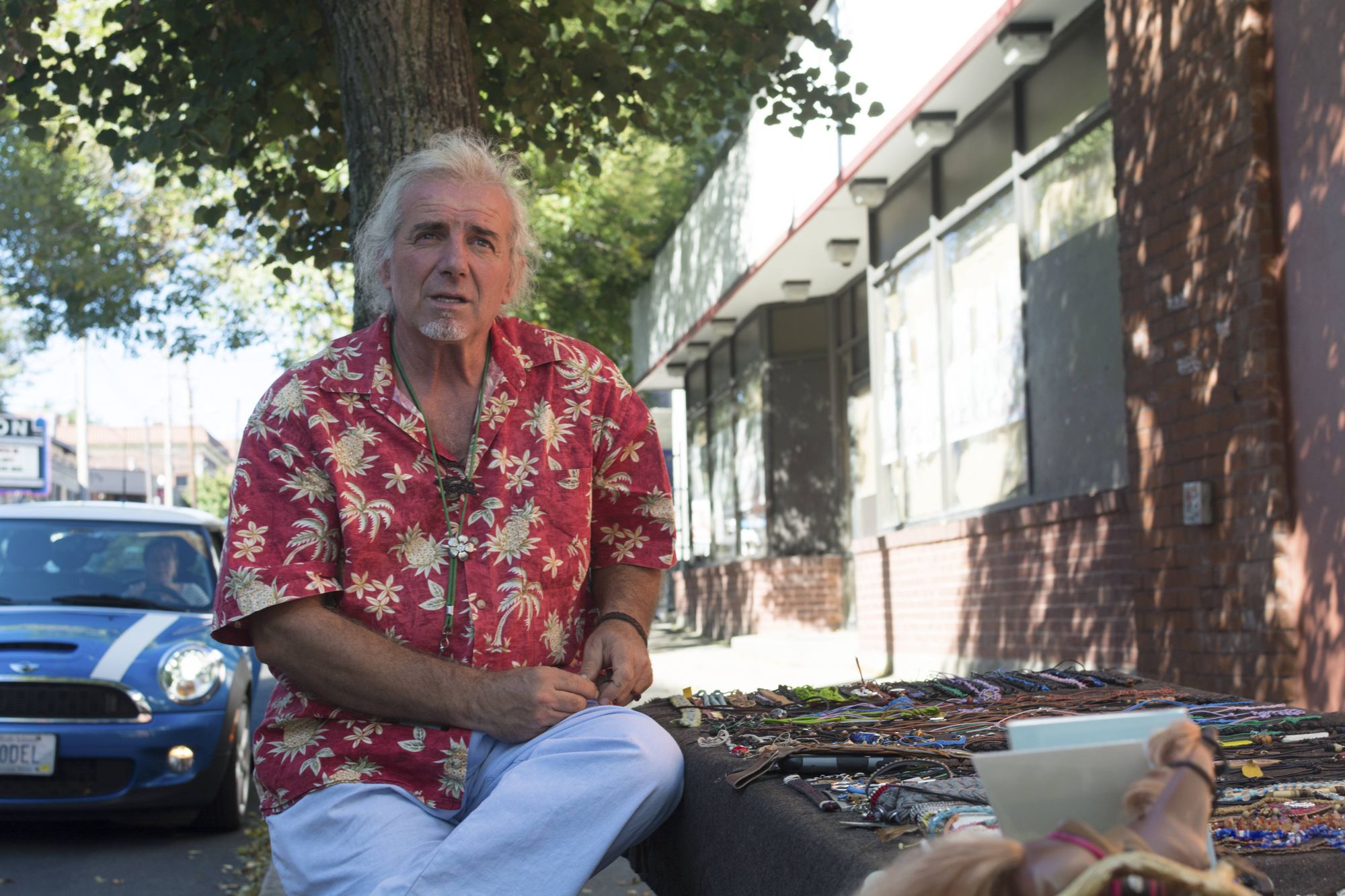 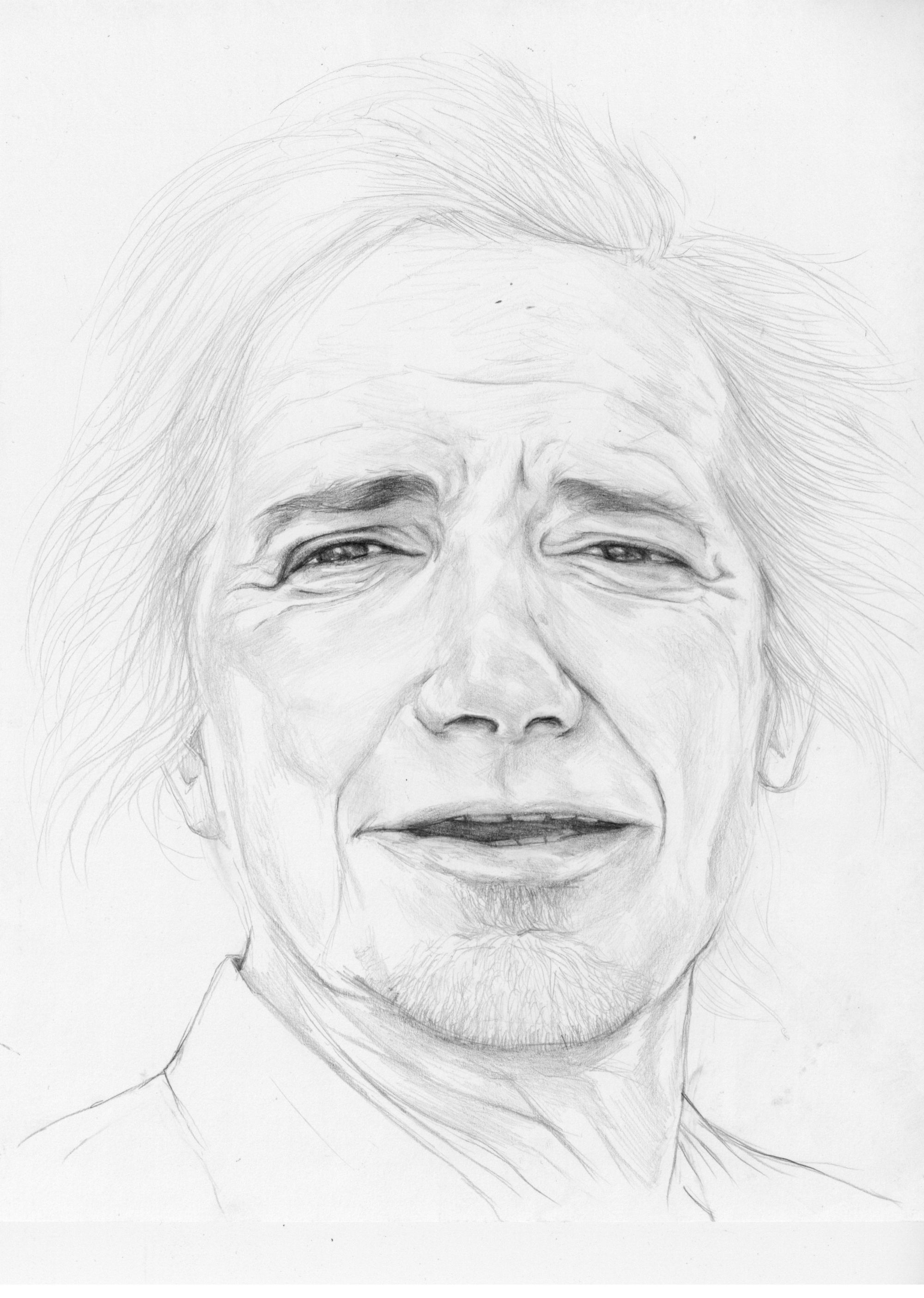 You can’t miss him when you walk down Thayer Street. José, 60, won’t let you. From behind his table covered in necklaces and bracelets, he calls in Spanglish to potential customers. “Buenas tardes, caballero! How are you?”

José grew up in Catalonia, an autonomous region of Spain that borders France to the northeast. He is descended from generations of artisans and braiders. José studied in a French-Spanish school until age 13 in Barcelona, when he fled the Spanish dictatorship and moved to Paris by way of the Pyrenees. “I travelled the world with my backpack, and did my research. Everywhere I went I saw braids and studied their structures.” In Montmarte—a district known for inspiring and housing generations of artists including Pablo Picasso—José slept on a mattress in a van without an engine and lived off the change left from fetching coffee and snacks for “all the big painters.” In 1988 he moved from Andalucía to San Francisco, finally making his way to Providence in 1992. He has been selling his work on Thayer Street for 21 years. When asked about the impact of the Thayer Street redevelopment, he responded, “I’m a businessman and an artist. I don’t care about what doesn’t give me a slice of the cake...The people who come to me are the people who look for me.” Amid the rows of jewelry spread across his table, José displays a piece made from what looks like rubber insulation. One day on Brook Street, he found long scraps of window insulation from the construction of 257 Thayer and wove them into an intricate bracelet. “I thought it was flexible enough and that it would be a good application of my art from little pieces...the leftovers. One cord. Nothing more, nothing less. It starts here and ends there.”

A laminated tag hangs from a green lanyard around José’s neck, right next to a leather necklace with his name braided on the end. He assures us that he pays his taxes and the dues for his permit. “I have the authority of the city,” he said. José appreciates the safety that Thayer Street affords with respect to other parts of Providence, but laments that “the police can give me a hard time whenever they want. It doesn’t matter if I’m here or there.” José usually sets up shop in front of Chipotle right next to his beat up blue minivan. He will occasionally remove a guitar from under his table and strum in the afternoon sun. “This is my life...I come here very simply with arts and crafts just to get by.” 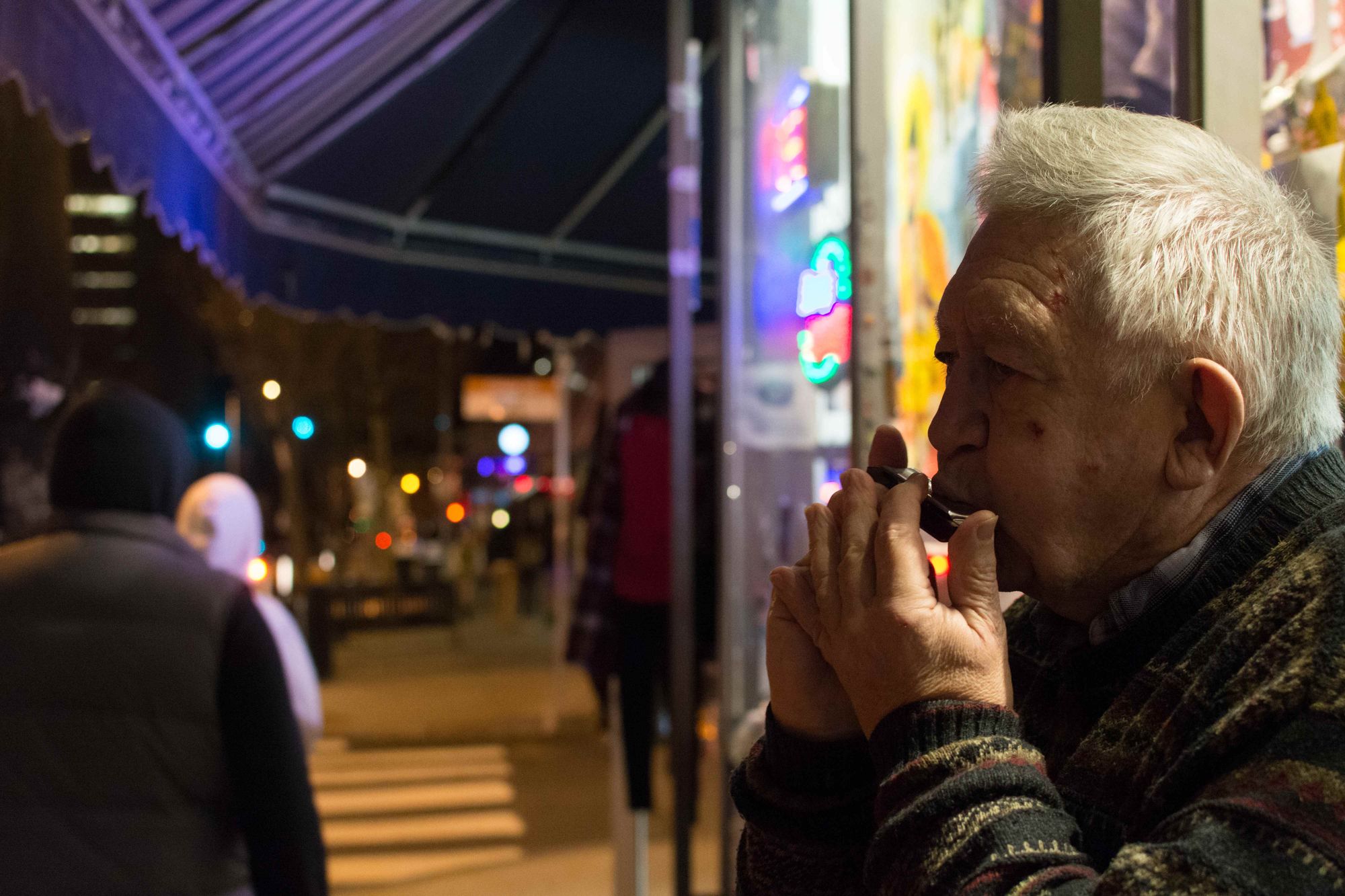 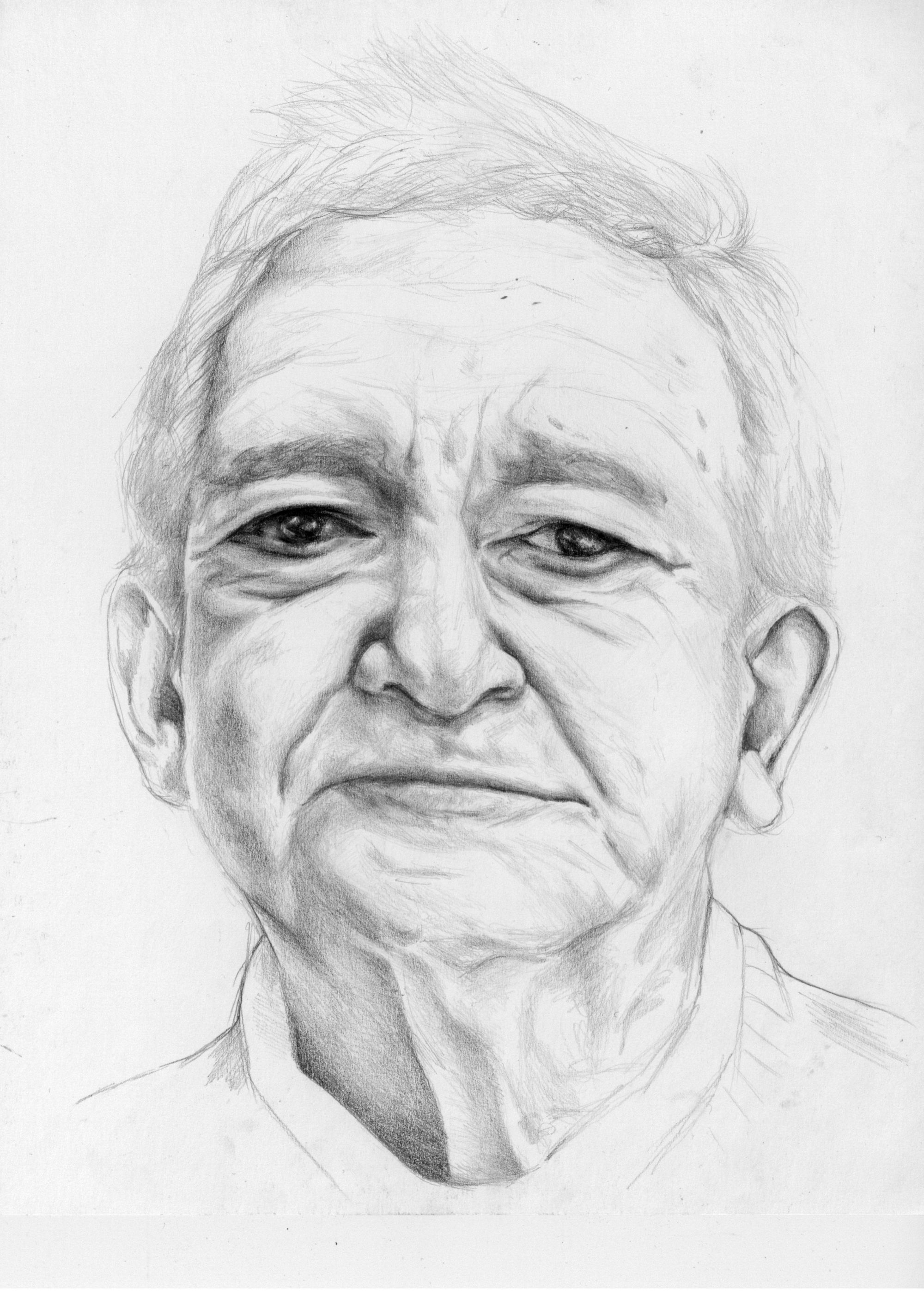 For the past 23 years, Maurice has played jigs and reels on his harmonica outside Spectrum India. Though he profits off his performances, money isn’t the main reason he continues to play. “It’s my main way of keeping busy. I live alone, and I have to get out.” Maurice has always preferred the outdoors; he grew up in a town at the foot of the White Mountains in New Hampshire. Since the mountains were only 12 miles away from his home, he started hiking, fishing, and hunting from a young age. Maurice’s father played harmonica, so Maurice began to learn the instrument at the age of 10. His favorite song to play is “Saint Anne’s Reel.”

Maurice enjoys seeing locals, tourists and students alike. A 75-year-old with an adult son who went to Brown, Maurice is rarely surprised by drunken college students stumbling down Thayer on the weekends. “I don’t point fingers. To give advice to young people, well, I’d say: do the best you can to enjoy life without getting in trouble. There you go. You’re not going to be perfect, because nobody is.” His interactions with others aren’t always positive; his collection bowl has been stolen five times and he was once attacked by a drunk man while performing. “He hit me in the mouth, he sure made my harmonica fly. It was right on this street, a couple years ago. I was standing here, not bothering anybody, but all kinds of people come up and you know, they think they can do whatever, because I’m like a totem pole standing there.” Yet despite the risks, Maurice has continued to come out and perform his songs for over two decades. Though he used to perform in Boston, the high cost of transportation led him to become a regular on Thayer Street. “I’ve done the best, I could, I know that. To enjoy life, being outdoors, I love that. I guess that’s one reason I’ve been out here all these years. I’ve done the best I can to enjoy life, that’s all I can say.” 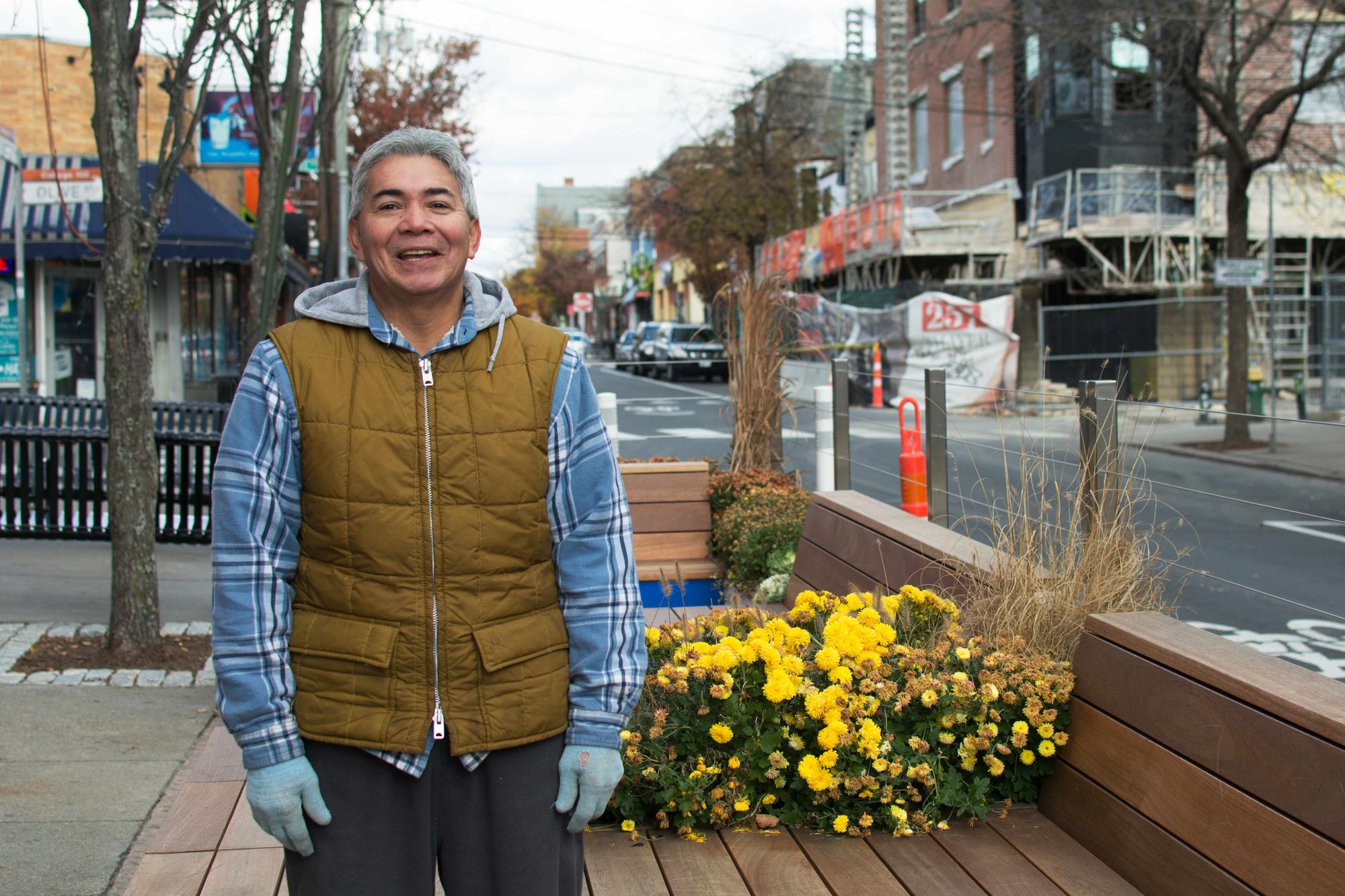 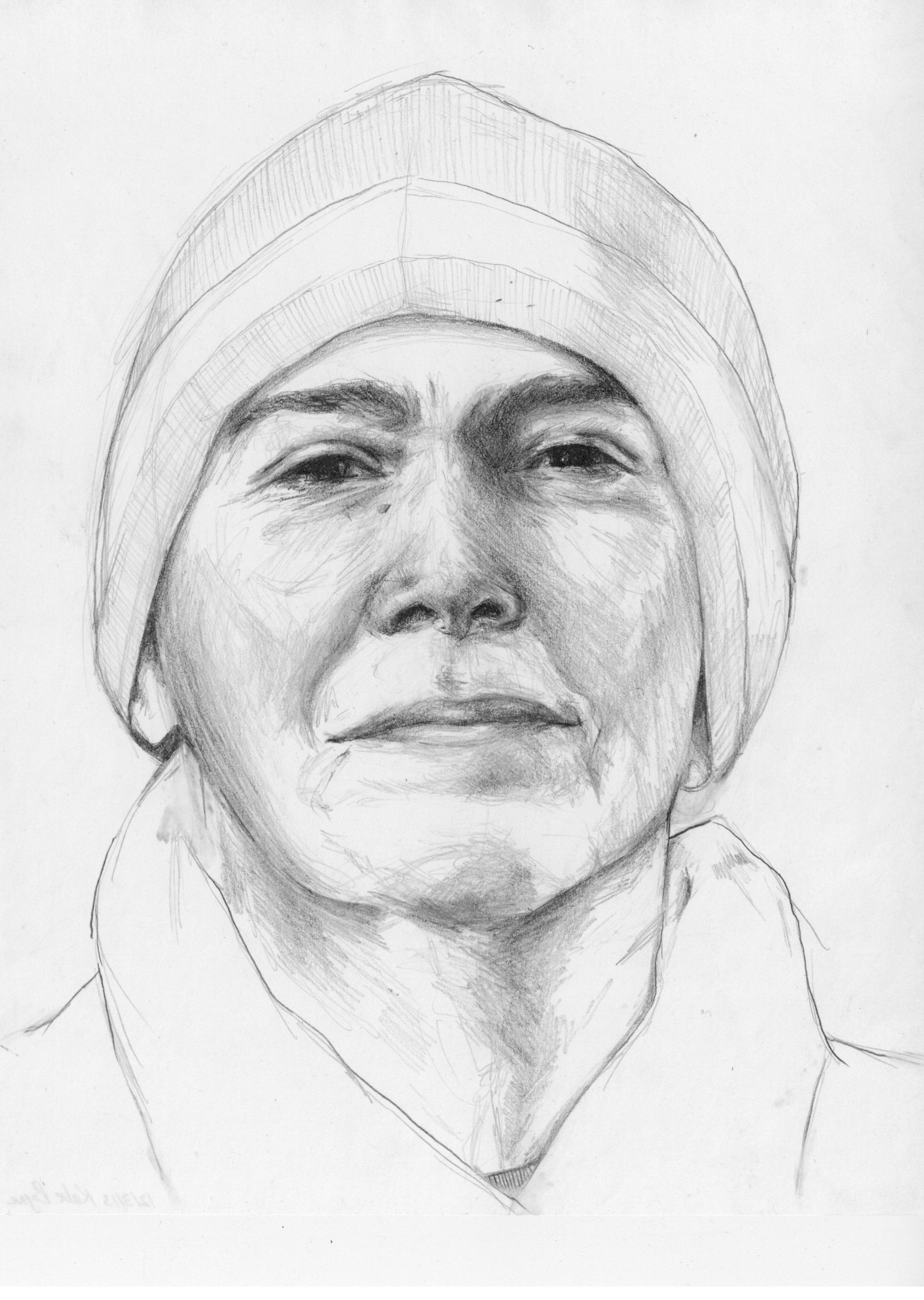 You probably haven’t seen James, 54, unless you’re up at the crack of dawn. He has only been working on Thayer Street for a year, cleaning the sidewalk and emptying the trash cans that span from CVS to Santander Bank. “I put my love into this,” he says. James works from 5:30 AM until 9:30 AM, Monday to Friday, and from 5 AM to 10 AM on Saturday and Sunday. Then he goes home to rest in Cranston before heading to his part-time jobs in the afternoon. “I’m a homebody. I don’t go out at night. It scares me.” Still, he prefers this work to his life before he became a legal resident. “Coming here isn’t easy. We come to fight and work. We don’t come to steal.”

James emigrated from Colombia in 1988, waving goodbye to the rampant cartel violence in his home city of Cali. “There was a lot of injustice in Colombia,” he says. Until 2007, James functioned on roughly three hours of sleep every night. Back in Massachusetts, he would rise at 5 AM to work at a bakery making cookies until 3 PM. From 4 PM until 11 PM, he worked in a restaurant in downtown Boston. Then he would ride his bike to his next job, where he washed cars until 2 AM. “They paid us what they wanted. They weren’t fair to us.”

However, his efforts were not in vain. In 2000, he finally saved up enough money to finance the trip to the United States for his brother, his daughter, and her mother. He had jobs arranged for them before they even arrived. In 2006, James married a Puerto Rican woman and became a legal resident. “Everybody thought that I was doing it to get my papers,” but James assures that they were in love. “My life changed. Suddenly there were more opportunities. You know that an immigrant doesn’t have as many opportunities at first. I couldn’t buy a car because I didn’t have credit. Now, I can speak freely. I’m no longer afraid of the police.”

His street cleaning job provides him with relative stability and purpose, but it isn’t always easy. People often knock over the heavy metal trashcans that line the street, and he struggles to put them back in place the next morning. “That thing weighs a lot... People need to think more. I don’t care if they throw away trash. I get paid for that, but they need to be more conscious. They’re young adults and need to appreciate things.” He has even picked underwear from the flowerbeds that line the new parklet in front of the Brown Bookstore. James loves to talk, and it motivates him to do his work well. “I don’t know much English, but I just like to talk to people. I keep learning.” People occasionally give him coffee in the morning and thank him for cleaning up Thayer. “When you’re working and people acknowledge you, it motivates you to make the place look nicer.”

As the redevelopment of Thayer Street manifests itself in new buildings and public infrastructure, there are other institutional changes that are influencing the lives of individuals. According to the City of Providence’s Thayer Street Planning Study, the Providence Police Department will expand the hours and scope of foot patrols and enforce regulations on the use of public space. The decision makes murky the future of the street’s buskers, preachers, and panhandlers alike. Certainly, the climate of the street has changed right along with the buildings themselves. In order to understand the human effects of the Thayer Street redevelopment, it is important to learn who these individuals are, where they come from, and how they shape and are shaped by their experiences on Thayer Street.