Black Yankee: Past and Present in Rhode Island 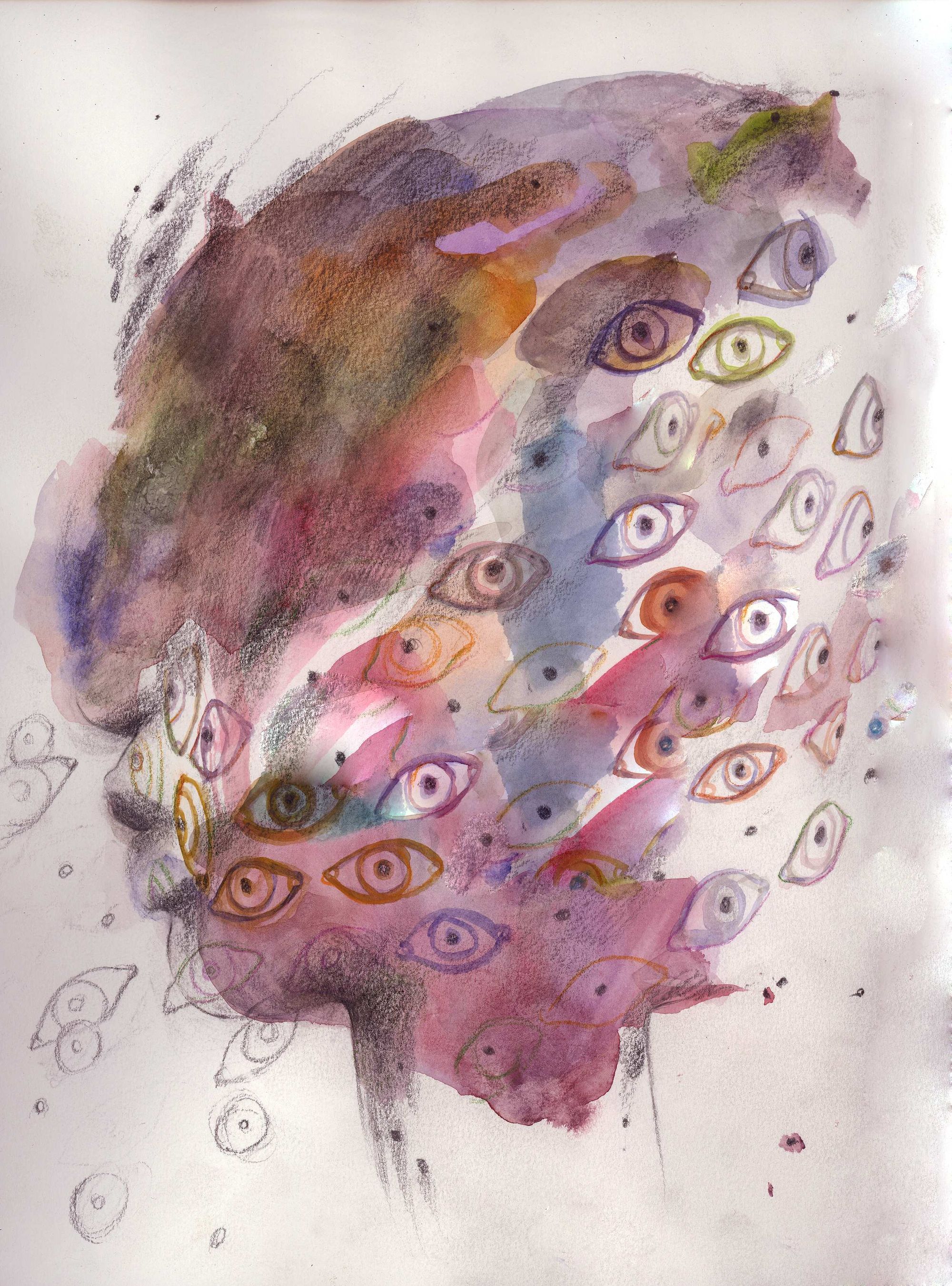 Every time I talked with a family member or neighbor about my impending matriculation at Brown that summer, now nearly three years ago, they offered a similar caveat: “now you know...” They’d usually whisper this next part jokingly, but sometimes not so jokingly: “there aren’t many black folks up in Rhode Island.”

When my mom came to help me move in freshmen year, we toured downtown Providence, making the obligatory family Bed Bath & Beyond trip. The mosaic of faces, some distinct and others as nondescript as ever, changed dramatically as we scurried down College Hill to the mall. “Wow, I’ve seen so many more black people than I expected,” Mom joked as we waited at a crosswalk.

And here, I’ve learned to see in color, too. Because I can see no other way.

It is no secret that Brown University was built on the Trans-Atlantic slave trade.

I. You. We weren’t there when the first black slaves came to Narragansett Bay in the 17th century. When Rhode Island’s slave population rested at an amount almost twice that of its New England peers because of the state’s monopoly in the Triangular Trade. By the mid-18th century, Rhode Island had a higher proportion of slaves than any other colony in the North. Rhode Islanders sponsored nearly 1,000 voyages to and from the African coast, transporting an estimated 106,544 Africans to the New World for enslavement.

We weren’t there to witness colonial Rhode Islanders trade food for slaves, dealing black bodies as commodities measureable in sacks of flour and barrels of cider. One Newport sale receipt, unearthed by Ray Rickman of the Rhode Island Black Heritage Society reads:

Newport 12th November 1726
Then recd of Tho. Arnold Twenty One Barrels Of Cyder & Thirty Seven pounds Four Shillings In part of pay for Two Negroes

Or to see Little Rhody become increasingly “protective” of its property, passing strict legislation in 1778 that forbid the removal of slaves from the state and enforcing these measures zealously throughout the following decades. Again exhibiting the harshest laws of any New England colony, a theft or runaway attempt by a black slave in Rhode Island would result in 15 lashes or banishment from the colony. Slaves banished from RI would be sold to ruthless sugar cane plantations in the West Indies. The state would eventually pass a personal liberty law in 1848, forbidding involvement with any fugitive slave cases. A sign of progress? Maybe.

We didn’t witness that, at the same time, free black people were carving out communities for themselves. By 1820, Providence, and Newport, to a lesser degree, were becoming increasingly popular destinations for black settlement throughout New England, despite Rhode Island’s draconian slave regulations. Community was grounded in the formation of local, independent black churches, the first of which was the African Union Church, and the founding of the Meeting Street School in 1828, the first public school in Rhode Island.

We weren’t there to witness the cultivation of a strong black community and presence in what is now Providence’s Mount Hope neighborhood as the area was settled in the early 19th century. Or the escalation and eventual eruption of racial tensions and rioting when cohorts of white Rhode Islanders pillaged black settlements in Snow Town in 1831 and its predecessor Hard Scramble in 1824. When a white man told a black to step off the sidewalk to let him pass. When the black man didn’t. And hundreds of white rioters burned the homes of 20 black families. Their actions, unopposed.

But we can see the displacement of black and brown families caused by the Lippitt Hill Redevelopment Project in Mount Hope. By the dawn of the 1960s, the Providence Redevelopment Agency had coercively relocated nearly 4,000 families in housing projects across the city, Williard Center One and Willard Center Two in South Providence/Point Street and Weboysett Hill downtown/East Side and Mount Hope on the East Side/West River in Fox Point.

At home, in Viriginia, Confederate flags blew proudly in the wind, legally abandoned symbols still deeply entrenched in cultural nostalgia. There was even one mounted outside our state house. The Dixie anthem rang sweetly over car horns and cell phone ringtones.

“In Dixie land where I was born”

The flag’s iconic emboldened red and crossed blue ribbons engraved with white stars were usually flanked by guns and catchphrases hailing the “Rebel Yell” on countless t-shirts and hats at my school, in my local grocery store, on the front page of the local news. The regional Ku Klux Klan chapter would circulate pamphlets on a biannual basis, anonymously leaving the incendiary tracts in mailboxes and car hoods. I was called the “N-word” for the first time in kindergarten; and before I promptly kicked that little boy’s backwards behind on the playground that afternoon and ended up siting alone in the principal’s office for the rest of the day, I stood in silence. Digesting. The connotations of my skin. I learned to see in color there, too, as I could see no other way.

But I was elated by the yearned-for northward migration that college—Brown— promised me. The idea that this liberal institution and racial cultural supremacy were mutually exclusive, but how naïve.

Almost immediately I found myself digesting those same connotations of that same skin over and over, just like before, in class after class, at party after party, in shops all over the East Side. When that Brown DPS officer stopped me before entering my freshman year dorm one Wednesday afternoon. “You’re not gonna piggy-back in here on me,” said the portly, uniformed white man.

“Do you even go here?” ... “Show me your student ID,” he interrogated. I did, but that wasn’t good enough proof. So he closed the door and tested my ID to see if it would swipe into the building. It did. And he left without another word.

It would be impossible to offer a complete account of every racially charged moment I’ve had in the past three years, to prove every time I’ve assessed my skin in the context of others’ skin and felt...something...less than...

That other time I was standing outside of a house on Williams Street, waiting for a friend at 1 AM and that white cop drove up, slowed down as he passed me, and rolled down his window starting at me boldly with a glint in his eye that told me without any verbal detonations: you don’t belong here. Then—

accelerated away, in an aggressive display of his power. He saw me see him see me see my blackness, read the superficial aspects of my identity, my skin as worthy of criminalization.

And that other time when I was smoking under the awning of a university building one rainy Friday afternoon, and the same cop who attempted to deny me entry into my dorm building biked up, “you need to put that out or move away from the building.”

“OK Sir.” He went inside.
I didn’t put the bogie out.
“I told you to put the cigarette out,” he returned moments later. “I could have you
locked up for breaking a federal law.”

I pointed at an unknown white peer a few yards away, also smoking within 50 feet of a university building, also breaking a federal law.

“Oh really?” We locked eyes, I put the cigarette out, he smirked and went back inside, I retrieved the wet cigarette, wrote a little note and jammed both of them in between the buildings front doors, hoping my buddy would see it when he exited:

We weren’t there, but here I see.

I see black faces, faces, black faces-Black-faced-portraits parading mediated conceptions of the convict, the criminal, the bad guy or the loud woman who will take yours because they are too lazy to go out and get their own. The Sentencing Project report says, that here, in the State of Rhode Island and Providence Plantations the black incarceration rate was 1,838 per every 100,000 black residents, as compared with the white incarceration rate of 191 individuals per every 100,000 white residents last year.

I see black man after black man after brown man after black woman after brown woman in the ACI. Adult. Correctional. Institute. And the ACLU reports say Providence police pull black people over for traffic violations more frequently and are twice as likely to arrest blacks for marijuana possession. But what’re we going to do about that? There aren’t any laws on the books against driving while black. Instead, acknowledge their blackness, see it. Then wait for them to break the law, then give them a ticket, then catch them with drugs, then it’s all a matter of agency and we can’t argue with that, right?

I see black. black. black. black. black. kid in detention in Providence Public Schools because, well, they’re disruptive. The ACLU also reported that 36 of 38 Rhode Island school districts suspended black students at disproportionately higher rates between 2004 and 2012. Or at least that’s what they say. Or maybe it’s because the Southern Poverty Law Center rated PPS’ civil rights curriculum: F? F, meaning that the Rhode Island elementary and secondary curricular standards include none or less than 20 percent of the recommended content on US historical battles for equality.

I see black. No, not a monolith, but always treated as such. Pathologize their color because it’s easier to think that way.

When that middle school teacher whose class I volunteered in told me, “Congrats, they assigned you to my worst class.” And maybe it was just a coincidence that the overwhelming majority of students in that section, unlike the teacher’s other four classes, were black and brown, 90 percent of them on free and reduced lunch? But probably not.

Every time I go into a CVS on the East Side and there are no black haircare products, every time the cashier asks, “Is there something I can help you with,” as their gaze follows me around the store.

Keeps tracing my steps. “Is there something I can help you with?”

Maybe that’s why I’ve always liked walking through Kennedy Plaza. Because I would surely see other black faces among the crowd and that affirmation of my skin felt nice.

That tacit smile exchanged briefly with another brown body in passing. Have they, too, felt the uneasiness and distrust rise from the pit of their stomach, up and down their spine to tips of their fingers and toes as they passed a congregation of uniformed policemen? I don’t know them. But when I see them I see experiential knowledge; I see understanding; I see color that looks like mine and that’s reassuring. I see the possibilities that maybe once before, or even right at that moment, this person has felt the same way. This person has also seen and felt in color.