Quite a bit of news, these waning days, gets lost to the humdrum. Print budgets have been slashed, newsrooms downsized, correspondents laid off; “the Golden Age,” it seems, is thoroughly fucked. So for those of us on the ground, sometimes it’s necessary to dream up a display so extravagant, so dramatic that it can’t be ignored. That’s right—it’s the Week in Pageantry.

It’s Halloween. You’re driving 60, maybe 70 MPH through the streets. Your tires screech as you spin around each corner. You feel every bump below you in the tight grip of your 1999 Toyota Camry. Oh yes. You are the coolest kid in your suburban town.

But what’s that, in the distance? A silhouette in the headlights. It looks like some sort of costumed man. What do you do? Do you stop? Do you wait to let him get by?

Hell no—you put the pedal to the metal, and as his bones grind under the tires, Halloween candy and feathers soaring into the air, you snag a Snickers outside your window without even looking. You smirk, never taking your eyes from the road, and tear a bite off that chunky delight.

Or so Karen Haigh of Fort Lee, New Jersey might have you do. This past Halloween, Haigh received a $230 ticket for not stopping to let a six-foot-four undercover cop in a Donald Duck costume cross the street, part of a recent safety initiative by the Fort Lee police department to make sure drivers don’t pass through crosswalks while pedestrians are in the street. “It scared me. I’m a woman,” she said. “It was a huge duck. If it was a person dressed normally I think all those people would have stopped.”

But oh no, not Karen Haigh. Donald Duck costume? Please. That’s the oldest trick in the book. Not only that, "This duck kept going to the curb, off the curb," she said. "I thought it was a crazy guy..." And with good reason. To the curb, and off the curb? Why not just erode the very foundations of society and sprawl one foot out on each? Maybe some ducks just want to watch the world burn.

What you have to understand is that we live in a postPatriot Act world, even on the streets. The authorities can infiltrate our phones, our emails, and our beloved childhood cartoon characters. Ask yourself: is that really Goofy that you took your photo with at Disney World when you were 10? Why is he just standing around outside Magic Mountain?

You’ll be happy to hear that Haigh will be fighting her ticket in the coming months, a case which your endlessly earnest correspondent feels will implicate not only the Fort Lee Police Department, but the entire Disney corporation, which has too long plagued our children’s hearts and towns’ curbs with oversized versions of creatures God would have made six-foot-four and capable of crossing streets if he had wanted to. Until that time, your correspondent will be standing with both feet firmly planted on the curb, chewing a Twix. 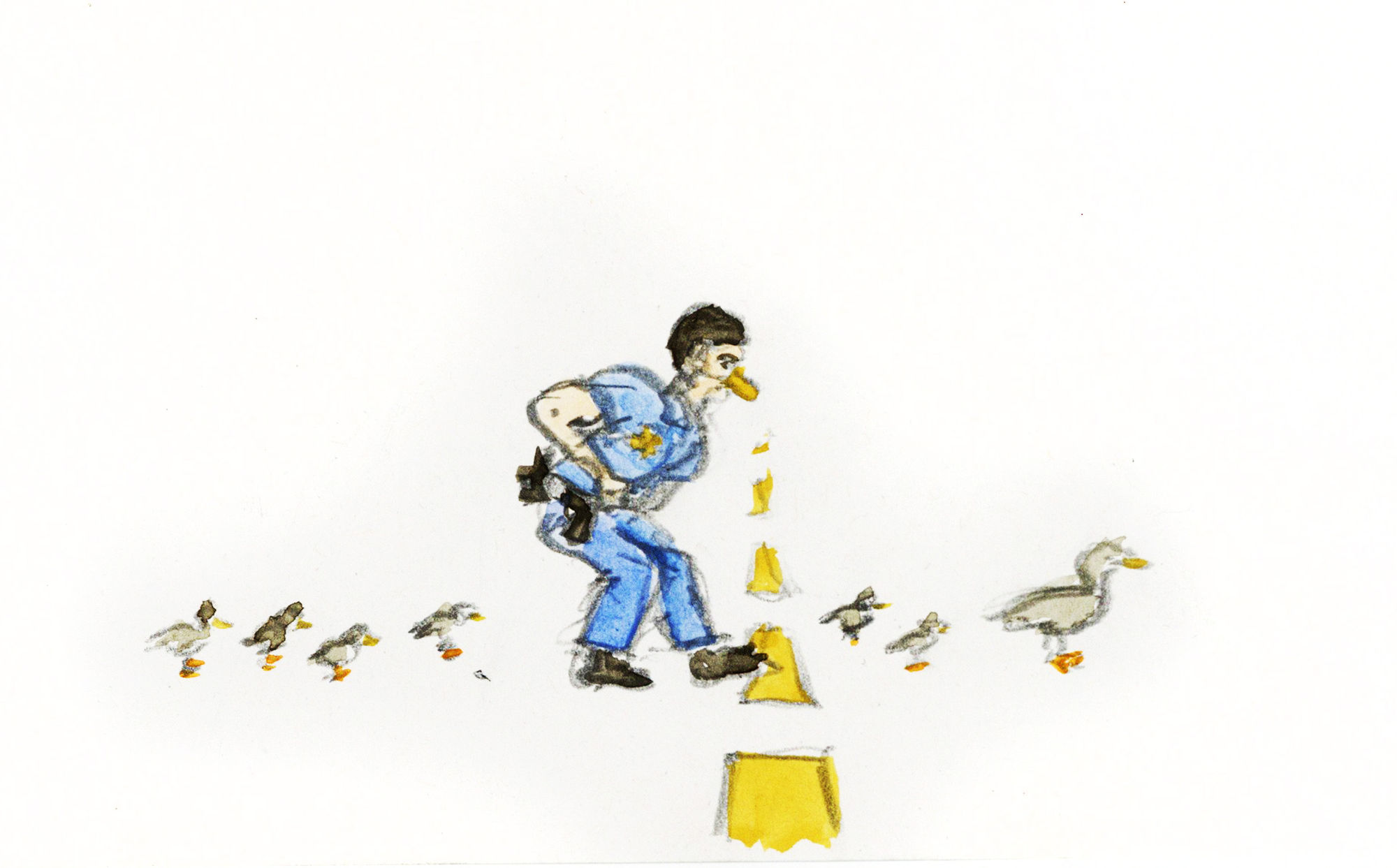 By all accounts, Fulton County wasn’t going to swing the vote for the state of Georgia. The blue oasis in an otherwise red state, or so Politico shows, couldn’t stop incumbent Republican governor Nathan Deal from defeating Democrat Jason Carter in Tuesday’s cutthroat gubernatorial race. But that didn’t deter one Fulton County resident, Jonathan Smith, from hitting the polls last Tuesday.

Jonathan Smith, better known as Lil Jon, is near and dear to the hearts of the American electorate, with celebrated studio albums such as Get Crunk Who U Wit (1997), We Still Crunk!! (2000), Kings of Crunk (2002), Crunk Juice (2004), and Crunk Rock (2010). He also follows in the footsteps of American Top 40 greats Ashanti and Fall Out Boy as the spokesperson behind the most recent “Rock the Vote” effort, whose mission is to register and turn out young voters. In service of his cause, he released a remix of his jingle “Turn Down For What” entitled “Turn Out for What,” which features well-known celebrities promising to go vote for a variety of buzzwords such as “education,” “human rights,” and “deforestation.”

So we can easily imagine Lil Jon’s distress as he woke up the morning of November 4 in his Los Angeles home to realize he still hadn’t received his absentee ballot from Fulton County officials. He tosses off the covers dramatically, sunglasses already on his face, and flashes his grills in the mirror as he heads to LAX to catch the first flight to Atlanta. With a righteous use of caps-lock, Lil Jon tweets to his some 300,000 concerned followers: “6AM FLIGHT TO ATL TO VOTE BECAUSE GA NEVA SENT MY BALLOT AFTER NUMEROUS CALLS!!! U CANT DISCOURAGE ME! #VOTETODAY @TURNOUTFORWHAT #ROCKTHEVOTE.” We breath a heavy sigh of relief upon seeing the orange “I’m a Georgia Voter” sticker on Lil Jon’s shirt in an Instagram post later that day. It matches his orange Ray-Bans perfectly.

And maybe Lil Jon had the right idea. Although absentee ballots make up a substantial part of the votes cast in a given election (as much as 17 percent of the vote in the 2010 midterms), researchers at Caltech and MIT have found that absentee ballots are more than twice as likely to end up as uncounted compared with votes cast on modern voting machines. One can imagine his explanation for where they all went: “through the window...”

What we’re left to wonder, though, is just what Lil Jon turned out to vote for. He claims he’s turning out for marijuana legalization, but the only ballot measures in Georgia last week were for income tax limits, reckless driving penalties, and tax exemptions for privately owned University of Georgia parking lots.