Towards a Greener Future

The environmental impact of cannabis cultivation 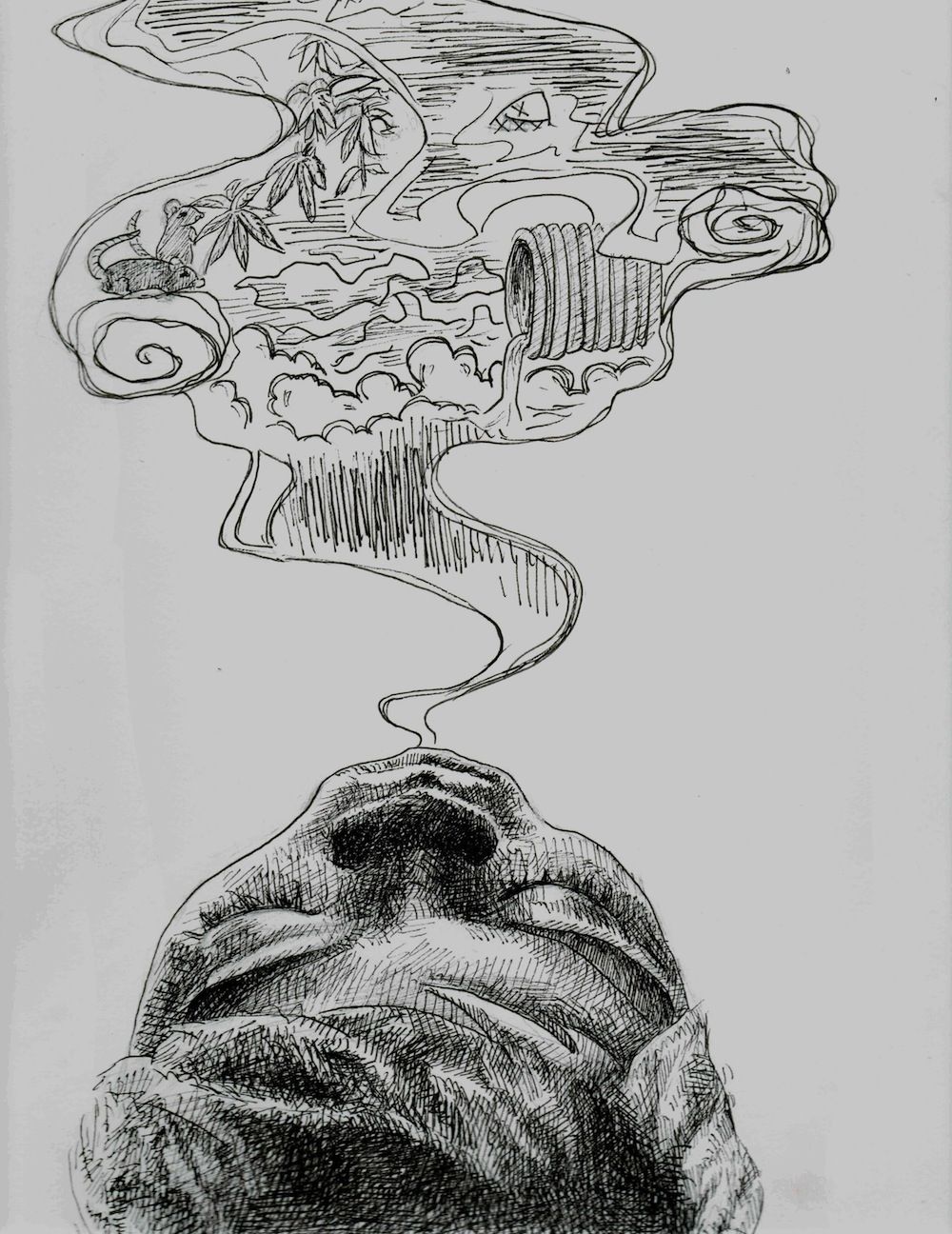 A pair of sultry eyes sunken into a frighteningly unblemished face appeared on the screen. Beneath a wisp of smoke ascending along the right side of the image, it reads: “Grow Your Own...Learn How.”

The ad called for some further investigation. I clicked on the link and was taken to a website called bcnorthernlights. com, which, despite some green accents, did not quite fit the confused aesthetic that I had expected. The website was clean and professional, hawking growing apparatuses with names like “the BloomBox” or “the Producer.” They looked to my untrained eye like mini-fridges from a college dorm. In a section titled “Learn to Grow,” the website urged the online viewer to “Take Control. Grow Indoors” in bold lettering. Underneath, it elaborated: “Through controlling every aspect, you can give your plants all the TLC they need so that they can grow into the healthiest, most abundant crop.”

Bcnorthernlights exemplifies a familiar culture shift in the marijuana industry: the indoor cultivation of cannabis is coming into vogue as an increasing desire for control over the crop takes root. But what are the implications of “taking control,” of this unique brand of TLC for THC? According to recent studies, indoor growing may be massively detrimental to the earth. “One average kilogram of final product is associated with 4600 kg of carbon dioxide emissions to the atmosphere, or that of three million average US cars when aggregated across all national production,” says Evan Mills, Ph.D., of the University of California and US Department of Energy, in a 2012 peer-reviewed article titled “The Carbon Footprint of Indoor Cannabis Production.” Hidden beneath the dense haze of legal and ethical concerns, the environmental impacts of our green friend have gone unnoticed.

Marijuana laws are complex. Only the most devoted to the cause are able to keep up with the ever-changing legal subtleties that vary from state to state. By and large, however, the cultivation of any amount of cannabis is considered a felony. And while there are a number of states that permit some level of cultivation, it is not federally approved. In Rhode Island, the cultivation of marijuana is only permitted for medicinal use, and those who qualify are only able to grow up to 12 plants. This legally prescribed amount pales in comparison to the output of any profitable growing operation, and the plants must be grown indoors. Otherwise, Rhode Island state legislation lumps cannabis cultivation in the same legal category as distribution, and the discovery of non-medicinal growing practices can result in prison sentences ranging anywhere from two years to life. Thus, the appeal of sequestering oneself indoors is understandable.

The environmental impacts of our nation’s reefer madness are unquestionably alarming. Evan Mills’s study plainly exposes this fact, ultimately estimating the energy used in this (mostly) illicit process to be around one percent of the United States’s national electricity use, or about six billion dollars per year. The energy implications of this mode of production are vast, and the laundry list of industrial equipment used is frightening: mechanically ventilated light fixtures, high intensity lamps, dehumidifiers, CO2 generators, water purifiers. The list goes on. While not all indoor growing operations are quite this technologically advanced, it is impossible to effectively grow marijuana indoors without leaving a substantial carbon footprint.

Mills points to the fact that when California legalized cultivation of cannabis for medicinal purposes, the per-capita residential energy use in Humboldt County increased by 50 percent. And while correlation is not necessarily causation, the evidence of marijuana’s sizeable energy impact is compelling. Ultimately, the study concluded that the indoor production of marijuana expends approximately 22 billion kilowatt-hours of energy per year. While this number is only one-sixth of the amount of annual energy used by refrigerators in the US, the American government has the ability regulate the energy use of everyday household appliances. The environmental harms of an industry that is technically illegal, however, proceed uncontrolled. Besides, this is a shocking quantity for such a supposedly radical recreation. Not every American home with a fridge is also harboring an illicit pot-growing operation in its basement.

One solution to this environmental problem seems simple: why don’t we just grow our marijuana outdoors? Even though it cuts down significantly on energy usage, outdoor growing presents comparable threats to the environment.

Outdoor marijuana farming draws many of the same criticisms as large-scale industrial agriculture. Monoculture farming—in which only one crop is grown—relies heavily on pesticides, as it eschews the natural pest barriers typically associated with more diverse systems of planting. This results in pests who are more capable of adapting to pesticides (“superpests”) and the subsequent use of more pesticides in order to kill them off.

While marijuana farms are nowhere near the size of industrial monocultures, they employ a similar set of practices largely stemming from the perceived value of their crop. Given the intensely precious nature of each one of these plants, marijuana growers are, by and large, willing to use as many pesticides as it will take to defend their crop. A hungry rat could cost a farmer $2,000 a plant, easily. Without any sort of environmental standard around growing practices, these tendencies have the capacity to spin out of control.

The water use inherent in marijuana production is also having an effect on local species. During bright summer months, cannabis plants require several gallons of water per day in order to maintain their luster. Thousands of additional water-consuming plants are therefore not ideal for an area already suffering from extreme drought conditions. Zuckerman’s article cites how the California Department of Fish and Wildlife likened water used in cannabis growth to a dried up stream nearby, which presented a serious issue for local coho salmon who were already struggling to survive.

Thus, while profits are being made and the urges of eager stoners are being sated, the implications of marijuana growth are slowly corroding the immediate environment. Zuckerman equates many of these environmental impacts to the effects of logging during the last century. Yet, thanks to state regulations, historically unsustainable logging practices were curtailed before they were able to do too much damage. With marijuana caught in a legal quandary, these sorts of regulations are not foreseeable.

But how did we get into this situation in the first place, and, more importantly, how can we get out? “Even though cannabis cultivation has flourished under the ambiguous auspices of California’s medical marijuana laws,” Zuckerman writes, “the people who are best placed to serve as watchdogs over environmental abuses in their remote areas still feel bound by a code of silence to protect each other from the law.” Here we find ourselves with an even more daunting blockade. Not only are the harmful practices of cannabis cultivation going largely unnoticed, those instances that are noticed are being systematically blocked by the legal predicament in which we have placed ourselves.

While many of the environmental problems associated with the growth of marijuana are not unique to the plant, marijuana maintains a privileged position based on its legal status. No entity has the ability to tell these growers that their practices are harmful, and legislators are unwilling to accept that these kinds of practices exist in the first place. They are illegal, after all. Putting claims of heightened incarceration rates and misguided enforcement aside, current legislation around marijuana has detrimental repercussions on the environment that have gone unnoticed in the public sphere. Our nationwide ban on the plant has put us into something of an ecological bind.

This lack of regulation also has implications on the consumer side of the spectrum, where there is a lack of transparency between the grower and the user. Consumers of more traditional agricultural products know to a certain extent where their food is coming from and have a kind of agency to choose between different types of products. Whether or not they choose to actually exercise this agency, however, is another issue entirely.

On the other hand, most consumers of marijuana have no ability to “vote” with their dollar. Marijuana, because it is an illicit substance, has yet to coopt the kind of organic seals that are coming to dominate the modern supermarket. While these seals certainly do not serve as a panacea to issues surrounding sustainable growth, they do represent a level of transparency that marijuana commerce utterly lacks. It is this lack of transparency that ultimately leaves cannabis consumers powerless in promoting sustainable growth of the plant.

That is to say, the beloved “locavore” mindset has yet to find firm ground in the cannabis community. Imagine two shadows lurking in a dimly lit alley: one says to the other, “Is it local?” Preposterous. For now we are trapped behind a dark veil, at the whim of the ecological tendencies of our friendly neighborhood drug dealers.

Beneath the rhetoric and legalese, our marijuana laws present a nearly impenetrable barrier to regulation of growing practices. The environmental issues with marijana cultivation are generated by political ones. While the current legalization debate is a back and forth between small government libertarians and economic opportunists looking for tax dollars, the environmental stakes should trump the rhetorical tête-à-tête between these tired political stances. For as these debates over the future of marijuana move at a snail’s pace in our legislative centers, the fluorescent lights of indoor growing operations will continue to hum ominously as growers of marijuana escalate their carbon and chemical emissions at a reckless speed.