Groovy advocacy and marijuana regulation at the cannabis caucus 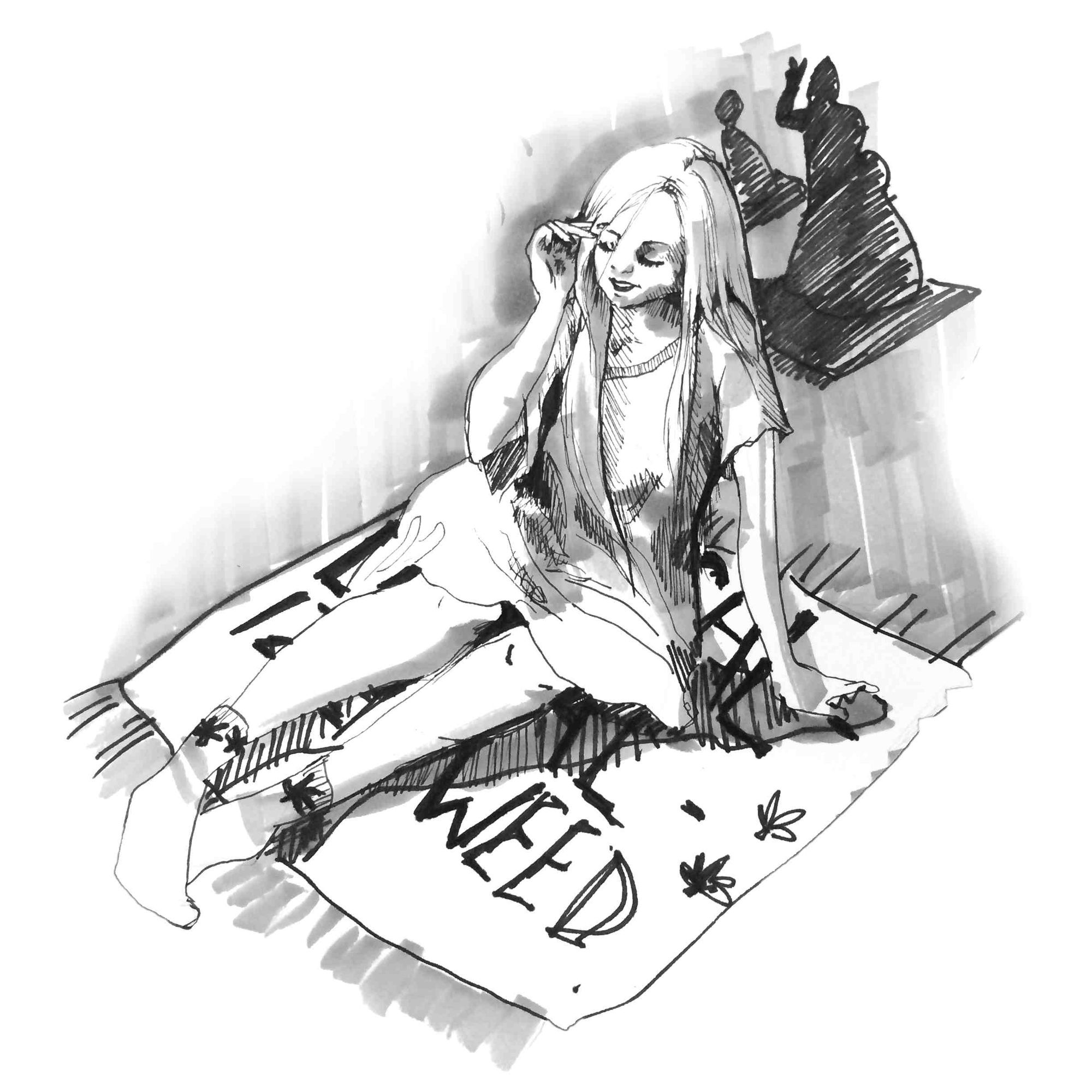 “Oh you mean the thing with the moon bounce?” said every friend I tried to convince to come with me to the “Cannabis Caucus,” presented by Regulate Rhode Island, a statewide coalition of organizations and Rhode Islanders working to legalize, regulate, and tax marijuana. The event was the first of its kind—one part networking event, one part political rally, one part local electronic music showcase. The mix of concert vibes and political content intrigued me. All my friends declined to join me there, but given my support for the cause and genuine interest in what this unconventional convention was all about, I decided to fly solo.

Still relatively unsure of what the event would look like, I made my way downtown after finishing a joint. It was only appropriate, I figured.

I listened to the eerie sounds of vintage Danny Brown trap music. Brown, a pioneering goon and well-known champion of cannabis, would surely get me into the right mindset. I would undoubtedly be all about that bass by the time I arrived. I mused on how much fun playing in a moon bounce would be in my foggy state of mind.

Whew—Westminister was a long street, I thought to myself as I passed lot number 140, my legs weary. I was going to 276. I eventually walked past a screening of O Brother Where Art Thou in a lot, and, tempted as I was in my dreamy state, I didn’t stop. I had made it to 260, too close to veer off track.

When I finally arrived at Aurora Art Space, the downtown venue that hosted the event, a small crowd was gathered outside, chatting, and smoking—only tobacco, of course. After realizing I left my wallet at home, I narrowly avoided the five dollar donation at the door and slipped in. Right on time for the first speaker.

There was no moon bounce, which disappointed my fantasy to bop around weightless for a while, though its absence was not too surprising.

About 20 people and I drifted into the spacious back room. The sparseness of the crowd made the room expand in my mind. Many others stayed in the front bar area. One of the event organizers, Jared Moffat of Regulate RI, gave a brief welcome, emphasizing the diversity of the coalition—a theme that would pervade the evening.

Sam Bell, State Coordinator of the Rhode Island chapter of the Progressive Democrats of America, was the next to speak. Both he and the next speaker, Republican Providence mayoral candidate Dan Harrop—whom the liberal Bell introduced as “the next mayor of Providence”—started by articulating the human costs of the War on Drugs and the undeniable link between marijuana criminalization and rampant mass incarceration. Harrop went on to say legalization was one of the most important contemporary civil rights issues, referring to it as a “moral imperative.”

Rhode Island was the 15th state to decriminalize small quantities of marijuana. The law, which passed in 2012 and went into effect in April 2013, makes possession of less than an ounce of weed a civil violation with a $150 fine. Three violations in 18 months, however, add up to a misdemeanor charge with larger fines of up to $500 and the possibility of a 30-day sentence at the RI Adult Correctional Institute. The Marijuana Regulation, Control and Taxation Act, if passed by the RI state legislature this session, would end marijuana prohibition for those of legal age (21 years old) and would regulate and tax marijuana similarly to alcohol. According to a survey conducted last year by Marijuana Policy Project, 52 percent of Rhode Islanders support legalizing and regulating weed. Another recurring theme in my conversations with several caucus attendees was legalization’s prospective job benefits and potentially positive effects on state revenue.

Moffat returned to the stage to make an announcement about prepared letters in support of legalization that guests could sign and send to state legislators. If you didn’t know your representative’s name, event volunteers would find the name for you by looking up your address.

There was also a photo booth.

The first remarks were concise. Then the first musical act, Kazamier, began as time stalled. Lo-fi synth beats pulsed from the background, as most folks returned to the coldly lit bar area. The music was the perfect mood for my haze. The dance floor was largely unoccupied for most of the night. Never more than ten people were scattered under the flickering lights, bobbing their heads, at any given time. Folks seemed more interested in networking than the music showcase. The music, which had already faded to an obnoxious murmur in the background, seemed even more unnecessary.

I found myself chatting with Harrop later in the night. I asked about the striking cross-party coalitions around legalization movements in Rhode Island and across the nation. “It’s simply not a party issue at this time,” Harrop mused aloud. The crux of the cause, remarked Harrop, is the aversion to “getting involved in people’s lives.” Harrop, a psychiatrist, compared having a joint to drinking a beer.

Percussion got heavier throughout the mix. And then the first set was over. Moffatt returned to the stage to introduce the next few speakers. Each two consecutive DJ sets were punctuated by brief political commentary for the rest of the evening. The night’s thematic pendulum, which swung between political commentary and synth vibrations, was difficult to navigate. A representative from Brown’s chapter of Students for a Sensible Drug Policy, reiterated in two or three sentences the implications of marijuana prohibition—namely extraneous incarceration—for young people, particularly young people of color.

The crowd was steady at anywhere between 50 and 60 people all night—and surprisingly intergenerational. But immediately I noticed that the overwhelming majority of event attendees were white, consistent for the duration of the event. It was refreshing to hear so many people dissect the intersections of race, class, and the so-often skewed and racialized enforcement of marijuana laws. At an event that was branded as free and open to the broader Providence community, however, as one of the three people of color I encountered in my one and a half hours at the caucus, a more—let’s say—colorful constituency would have been nice to see. And while all the commentary around this aspect of the state regulation debate was consciously critical, many of the speakers’ advocating on behalf of populations absent from that particular room suggested a disconnect to me.

Write-in gubernatorial candidate Anna Armstrong entered the stage to chants of “beat Buddy Cianci!” Beyond briefly mentioning home grows—personal-use marijuana plants grown in the comfort of one’s own home—as a “crucial” aspect of her platform, Armstrong’s speech was one of the longest and most off-topic of the night. One avid Armstrong supporter kept yelling “AMEN” during her remarks. She spent several minutes talking about the larger function of the political system and how she could win the election as a write-in candidate with no campaign funding. She struck me as an odd choice to speak at the event until I later realized that Armstrong had given me one of her campaign stickers when I first entered Aurora. The sticker had a large tree on it beneath the words “Anna Armstrong for Governor,” so I figured she was down with the cause.

I spent most of the night trying to chase down Moffat. “Five minutes,” he kept saying. But an hour went by. I wondered how the event had been conceptualized. I wanted to ask him how the organizers selected the musical acts. If they even had. And was there any connection at all between the music and the message? If there was, I missed it. Detached from the relevance of the commentary on the issue, the music made the whole night seem as disjointed as Armstrong’s speech. Was that the point? Aha. Taken metaphorically, the manic atmosphere of the event could have been some grand allegory for the state of the legalization debate in Rhode Island. Drawn to the cause for a multitude of reasons that are as disparate (yet valid) in origin as the average age of any two caucus attendees, the coalition members and legalization advocates and stakeholders are as scattered as the evening’s agenda.

I never spoke to Moffat. And I left before I could see what was up with all the hype around this moon bounce cat, but after checking out his soundcloud page, he seemed OK— even if he isn’t an inflatable castle.