Ghosts in the Machine

The sounds of the digital archive 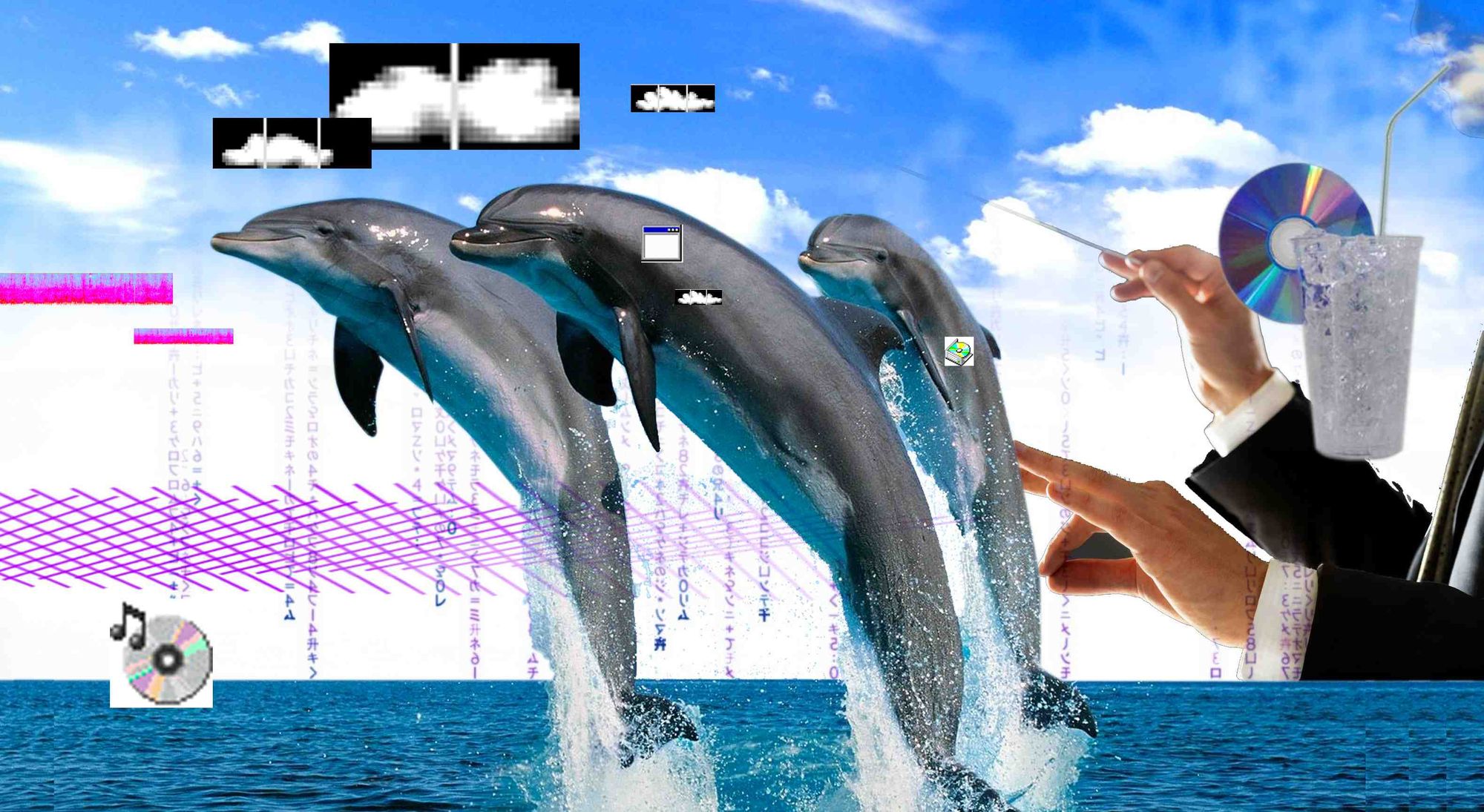 How can a body connect with the Internet? Think of how each sense would conceive of the Internet. It’s harder than you would initially imagine. The Internet inevitably gets figured in terms of smoothness, integration, unfettered connectivity.

Think of graphic representations of floating green text webs or a boundlessly unmediated everything-store. Sense requires something to hold onto, a fault line in the systems of information. For the Internet, the only conceivable fault line lies precisely in its impenetrability, in the senselessness it engenders. So then, what would that senselessness sound like?

In his memoir A Year with Swollen Appendices, Brian Eno identifies the importance of error in a medium’s sensibility. He points to the fetishization of “CD distortion, the jitteriness of digital video, the crap sound of the 8-bit” to conclude that “whatever you now find weird, ugly, uncomfortable and nasty about a new medium will surely become its signature.” For Eno—an integral figure in the majority of modern music’s technologically aided evolution—modern art is then “the sound of failure,” of “a medium pushing its limits and breaking apart.” Yet the Internet, in presenting the entire history of recorded sound atemporally and seamlessly, in what many have termed the “digital archive,” seems to present us with a medium whose chief characteristic is its unbreakability. Can the Internet then have a legitimate claim to sound like everything?

The past few years of music to ride Internet hype waves would seem to indicate so. Looking back at the past decade, one can see the entirety of recorded music systematically re-appropriated—from the ‘60s garage rock and girl groups in hip early-2000s New York City bands to the commercial cheese of ‘90s R&B in contemporary electronic music—and rolled out anew. This phenomenon has widely been chalked up to the unmediated and limitless access the Internet provides to the digital archive. The novelist Jonathon Lethem, in his essay “The Ecstacy of Influence,” even goes so far as to say that the existence of such an archive creates a genreless present, where any form can be assumed or incorporated by artists. For him, the Internet facilitates a utopian historical project set out by the English metaphysical poet John Donne, that—through the freedom and formlessness of art—all mankind will become “one author, and [be] of one volume.” This intuitively makes sense: if all the artistic genres and forms are laid out before us atemporally, any may seem just as interesting as the next.

Yet, in looking at the succession of popular genres reappropriated by Internet-enabled young artists, the parade of nostalgia progresses in a startlingly historical manner. As the historical mining of the digital archive came closer and closer to the present era, a question began to emerge: has the digital archive closed the loop of artistic input? If so, the Internet’s claims to perfect seamlessness would seem justified and a utopian art achieved. But could we live with the silence?

By the end of the first millennial decade, the historical re-appropriation of sounds from the digital archive ran into the childhoods of those who grew up alongside the Internet’s popular adoption. The music that resulted—largely within the world of experimental electronic music—became especially self-conscious of the assumptions behind the appropriation of past sounds. This proved most true in vaporwave (sometimes also styled as “vapourwave”), a music genre named for a publicly announced future technology that a company never makes or even has any intention of making. The term emerged in 2010 with Chuck Person’s Eccojams

Vaporwave artists often worked anonymously, assuming a multitude of names to match their prodigious output. Vektroid, for example, has released 40 albums since 2005, under such names as MACプラス, 情報デスクVIRTUAL, and New Dreams Ltd. The Photoshop art that adorns these albums replicates the aesthetic of Windows ’98 and stock photographs while song titles make liberal use of brand names and Japanese or Chinese characters. Despite its incredible aesthetic specificity, vaporwave ran its course in the space of about three years, demonstrating an arc of rapid codification and just as rapid abandonment.

As a relic of an Internet music culture that churns out microgenres, this is hardly surprising. Yet, as one of the first genres to interrogate nostalgia as both lived and virtually represented, vaporwave foregrounded the underlying assumptions behind an Internet culture geared toward historicist re-working. Most vaporwave artists ground their work theoretically in the Détournement of the Situationist International or Marxist accelerationism—the idea that exacerbating the hypocrisies of capitalism will bring about a crisis or revolution. In re-contextualizing the forgotten, ambient, and excessive noises of techno-capitalism—the advertising jingles, forgotten pop hooks, the Muzak of commercial space—through pitch, tempo, and tone processing, vaporwave simultaneously satirizes the cheesy excess of the sounds and uses them as the basis for what often becomes moving and original music. These sounds, sourced from the dawn of consumer tech’s expansion onto the Internet, remind one of the very awkward process by which the digital archive began being built in the first place. Vaporwave thus reminds us that the Internet does have its own sounds: the aural byproducts of techno-capitalism. For most of those growing up alongside the Internet’s commercialism—these artists included—the kitschy, surreal sounds of glittering synths in Windows commercials eventually became the means by which they accessed music in any sort of “digital archive.” Any sort of claim to accessing or re-appropriating everything that ever was must then take into account the now laughably futuristic sounds of techno-capitalism’s expansion online.

The tension vaporwave mines in both ironizing and celebrating the sounds of early techno-capitalism lets it both isolate the perceived excess of that capitalism and recognize its importance in opening up the ability to remix these sounds into art in its own right. At its best, as the artist INTERNET CLUB put it in response to the glut of theoretical thinkpieces, vaporwave is not just “Marxist plunderphonics,” but entertaining, captivating, and evocative, especially for listeners who similarly grew up alongside the digital archive’s construction.

The repetitive smoothness of the synth chimes, pitch-shifted popular vocals, and occasionally glitch-based rhythms collectively create an immersive soundscape. One begins to buy into the use of these sounds as advertising or background moods in the first place. They almost defy thought in the simplicity of their appeal, as if being stuck in an elevator for long enough, you suddenly and drowsily realize, you don’t really want to leave.

And maybe this gets toward what vaporwave as a genre offers: the chance to sincerely indulge in the pleasures offered by the conditioned stimuli buried in technologically mediated childhoods from within the protective cone of political irony. This approach validates the Internet music community’s default setting, exposing the techno-capitalist underbelly that enables the historicist aesthetics so popular today. Vaporwave adds the history behind claims to genrelessness, proving that the digital archive has not resulted in a genreless landscape but has the same historical contingencies as any other artistic movement.

The online hype cycle that fed—but also was in part the object of—vaporwave seemed to have proclaimed it dead last year with the release of Oneohtrix Point Never’s R Plus Seven. On R Plus Seven, Lopatin added dense layers of droning grit from layered echoes of organs and vocal samples turned into rhythmic breath to the trademark cleanliness of vaporwave. R Plus Seven thus achieved an incredibly powerful and shifting sense of focus that more closely replicates living movement than the hypnotic loops of Chuck Person’s Eccojams Vol. 1. Through the sounds of the Internet, that which lies dormant behind its choices—the human—has ruptured through and given us something to hold on to.

While it seems almost especially pointless to proclaim the death of a genre that built itself around sounds meant to be dead-on-impact, the popularity arc of vaporwave validates the very thing it demonstrated: that genres—and art forms in general—base themselves in history and thus must eventually die. The digital archive has not launched us into artistic utopia and closed the loop of human expression. And for this, for teaching us once again how to die, we must thank the most insignificant, a microgenre built on the forgotten.