The high-definition debate in skateboard culture 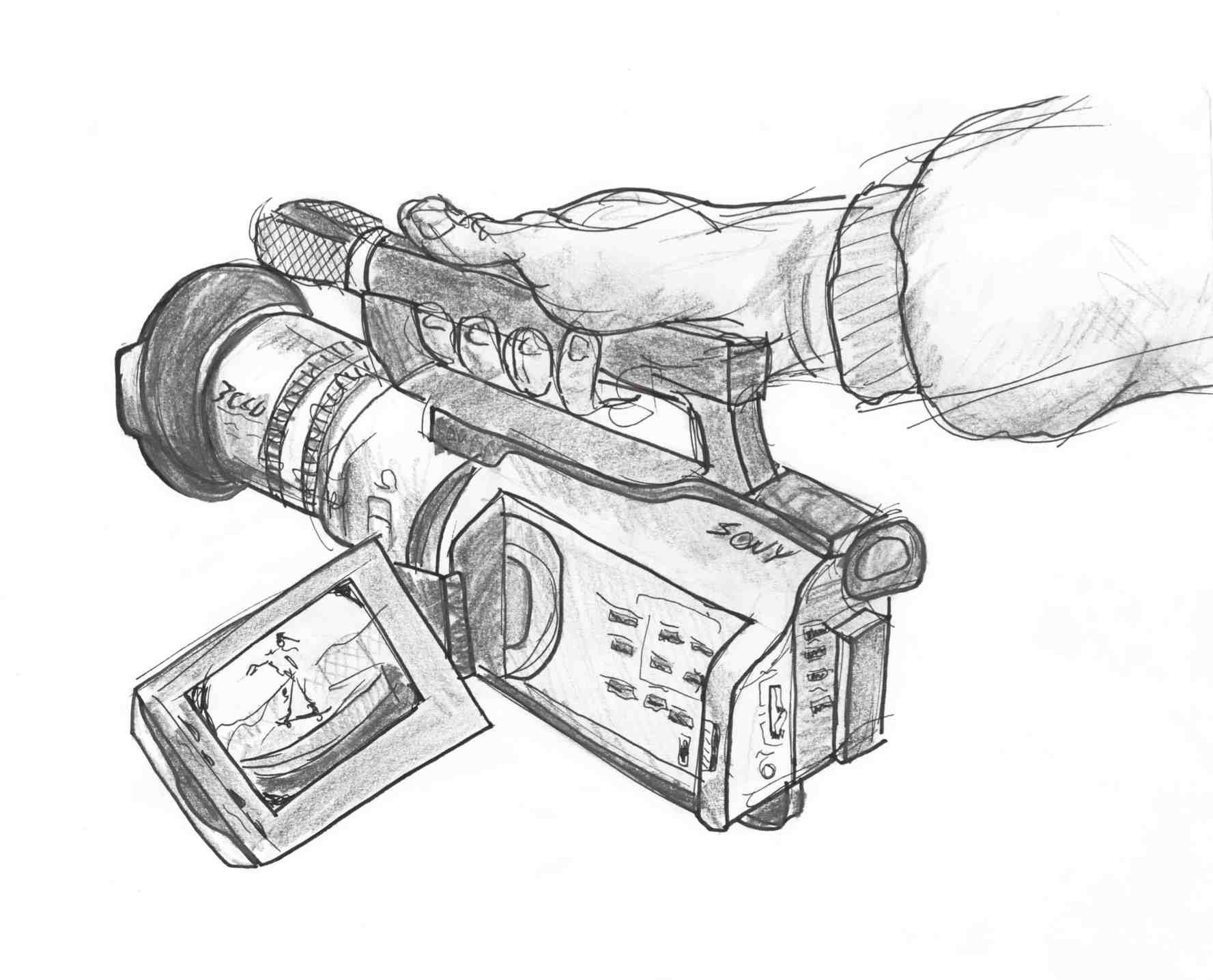 Holding your skateboard by the truck, known colloquially as “the mall grab,” might seem inconsequential to the layman, but it can serve as a salient cue of inauthenticity to those in the know. The popular narrative surrounding the mall grab: people who carry their board by the trucks, instead of by the wood of the tail, shop at corporate mall-chain skate shops like Zumiez and Pac-Sun. It’s unclear why this way of holding a skateboard is associated with these retailers. Though perhaps arbitrary, “the mall grab [is] the ever-present distinguisher between most real skateboarders and fake skateboarders,” according to a 2009 article entitled “The Mall Grab” on (ironically enough) the official X Games website. How does such a seemingly small gesture indicate so much to skateboarders and so little to everyone else?

Though its status as a multibillion-dollar industry might suggest that skateboarding has “sold-out” since its fledgling days as a fringe culture from the 1970s through the 1990s, many skateboarders still feel that there is a core of their culture that refuses to be subsumed by corporate America. Whether or not this is true is hard to say. What does it mean for skateboarding to be subsumed by corporate America? Does a kickflip not remain a kickflip when flicked with a Nike SB rather than a Lakai high top, which would garner fewer glares at the skate spot?

Whatever the case, there is the widespread fear among skateboarders, as popular skateboard blog Jenkemmag puts it, that “corporations only value skate-companies and skateboarders in relation to how much capital they can generate for a group of shareholders, instead of valuing them as important parts of our culture.” From this fear grows a system of cultural cues—small details—that signify how aware one is of the way their consumer decisions affect skateboard culture.

As if it were the black sheep of King Midas’ family, wherever the corporate hand seems to touch the skateboard industry, the industry turns a sickly green hue. The lesson of the mall grab is that even arbitrary details in the practice and aesthetic of skateboarding become replete with significance and become indicative of a corporate or non-corporate stance.

Much in the way that Bob Dylan’s electric conversion sparked vitriolic reaction among his fans, who lamented his loss of purity, so did the transition from the Sony VX1000 camera, recording skate videos in standard definition, to various high definition cameras, have a hugely polarizing effect on the skateboard community (though certainly not on such a national scale). The subtext of the debate resonates with the typical fringe-versus-corporate tension central to the “the mall grab” phenomenon and common to any subculture whose popularity and potential profitability have garnered the attention and funding of corporate sponsors. Standard definition—the dirty skate-rat David. High definition—the corpo fat-cat Goliath.

The SD vs HD debate came to the fore in 2009 when Nike SB came out with Debacle—the world’s first full-length HD skateboard film. That it was filmed with a high-definition camera was hugely significant; almost every full-length professional skateboard video for the fourteen years preceding Debacle was shot not only in standard-definition, but with the same standard definition camera: the Sony VX1000, which came out in 1995. “The VX is just, like, made for skateboarding...” said Beagle—a well-respected videographer for Baker Skateboards—in a recent mini-documentary featured on the RIDE channel. Holding the one-of-a-kind green and yellow VX1000 that has become iconic in his lap, he continues: “The handle on top keeps it all steady. It’s got the best fisheye. I don’t really see any other cameras better than that.”

Beagle is famous for the low-budget, rough-around-the-edges skateboard culture he captures in his videos for Baker and its affiliated brands. He splices clips of casual drug deals, debauched party scenes, and sometimes his dog performing skateboard stunts in between shots of impressive skateboard maneuvers. In the seminal 2005 video “Baker 3,” he even films himself running a mile down the street as he’s chased by a man and two cars trying to steal his camera. What’s compelling is that it’s all real, candid, and often unabashedly illegal.

He offers the viewer a lens into skateboarding, but more than that, an honest view into the debauched and entertaining hijinks of skateboard’s sweat-stained elite. Woven into the debauched clips of Baker skate videos are the formal characteristics specific to the VX1000—formal characteristics that span the entire industry from 1995 to the present.

The uniformity of filming equipment employed in the production of skate videos since 1995 has rendered certain formal consistencies unique to the Sony VX1000’s footage an industry standard rather than a mere stylistic detail. Over the years, the camera’s grainy composition and golden/blue color distortions have become aesthetic features inextricably linked to the essence of the skateboard cultures these films portray. Colin Read, the videographer of the skate video instant classic “Tengu: God of Mischief,” points out in a recent VICE interview that the VX1000 “came at a time when people were perfecting the art of skate videos. Because of that, it just has a history in skateboarding for people of my generation.”

It should come as no surprise then, that the hyper-crisp images and vivid coloring of Nike’s Debacle composed a particularly jarring aesthetic for the skate world. The 1080p resolution of the HD camera looked like the clean-shaven, straight-laced brother of the low-life VX1000’s 480p resolution. But beyond a violation of skate videos’ general propensity for grunge, Debacle made a mockery of the rougharound-the-edges conventions that filmmakers like Beagle have championed.

Debacle is a strikingly cinematic Skate Film. Even outside of the use of higher resolution cameras, it is a notable film for its self-reflexive commentary on the skate video genre. The film introduces each skateboarder with a scene portraying a “debacle”. Professional skateboarder Daryl Angel’s part, for instance, begins with a man jumping in front of his board after he grinds a bench. Angel jumps off his board and gets into the supposed stranger’s face. The stranger yells things like “I told you to stop skating!” and “Get off my damn property!” until Angel throws his skateboard through the nearest window, shattering the glass before he runs away. At first, these spectacles seem to be in keeping with the skate video motifs that Baker skateboards mastered and so many others emulated—destruction and illicit debauchery. But upon further consideration, the sheer gall of these skaters being followed around by a posse of Nike’s cameramen breaking windows, wrecking cars, being generally short-fused and insufferable to the people around them begins to seem totally unlikely.

If it seems unthinkable that a major corporation would release footage of their sponsored athletes acting in flagrant violation of the law, it’s because it is. At the end of the 20-minute film, a disclaimer discretely flashes across the screen for three seconds, which reads: “No actual cars, glass, people, business owners, concrete benches, windows or bus shelters were hurt during the filming of Debacle. All the stunts were performed by professionals. Do not try this at home or anyone else’s home. Nike SB wholeheartedly endorses skateboarding, but always skate within your abilities and with respect.”

The video’s artificial hijinks were received poorly, as one might expect. The Youtube comments near the release of the film spewed negativity, in true Youtube comment form, but the exact nature of the negativity is telling. User “Frenchieakafrenchie” echoed the criticism of a majority of the other commenters, in relatively inoffensive terms: “The skating's great, but the whole music and extra 'badass' scenes are literally what a fatcat nike exec who has never skated in his life probably thinks skaters are still like.” The video comes off as the cinematic adaptation of an authentic Baker 3 skate video (with really good stuntmen), grounded in the market research of an expensive consulting firm. If we are to take the Youtube comments as a general litmus of the film’s reception within the world of skateboard fandom, then it seems that HD’s grand introduction into the skate world is tethered to and thus tainted by an all-too transparent corporate attempt at authenticity. Not only did Nike’s HD inauguration change the formal aesthetic of the skate video, but it also offered up a hollowed-out semblance of the rich, if sometimes deplorable, skate culture captured through the lens of Beagle’s VX1000.

With these debacles in mind, it’s no surprise why there would be resistance to the adoption of the HD aesthetic into skateboarding culture. But in 1995, there was no nostalgia attached to the Sony VX1000’s idiosyncrasies. It was the superior technology for skateboard filming in spite of its departures from exact visual representation—its warm blue and gold hues. The skate video’s fidelity to the standard definition aesthetic will forever demarcate an era of skateboarding. Perhaps the incorporation of HD will one day come to receive the same sort of nostalgic attachment that the VX1000 did. But the VX1000 will remain the visual attire of Beagle’s masterful sleaze. That HD videos strike a visual dissonance with the VX1000 is exactly why we can conceive of a coming shift in skateboarding culture; as is true with many new technologies, the acceptance of HD seems inevitable at this point. But it’s never easy saying goodbye.