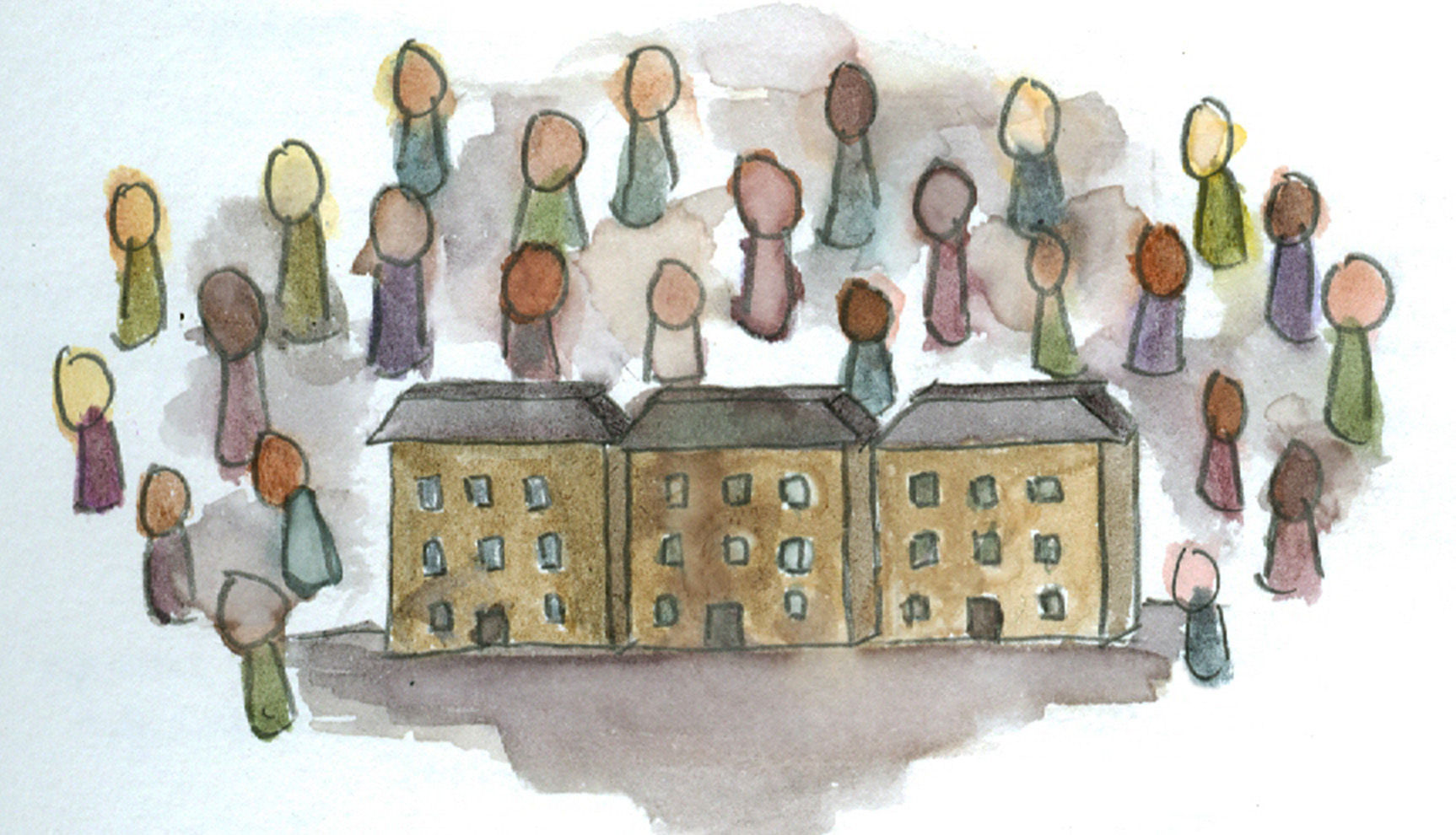 Over the past three years, lifelong Providence resident Roline Burgison stood by and watched as her friends, family, and neighbors left the state. It’s not that these people wanted to go, Burgison is quick to explain, but that they had nowhere to stay. As housing costs and foreclosure rates skyrocketed in Providence in the wake of the 2008 recession, many residents left their home state in search of a more affordable life. “I told my kids to leave,” Burgison, who is an active member at Direct Action for Rights and Equality (DARE), explains. “I said ‘you were born and raised here, but there’s nothing left for you here.’” After searching for two years, Burgison finally managed to find a one-bedroom apartment for herself in the Silver Lake neighborhood on the western edge of Providence.

“I found a place for now, but this is not where I want to stay,” Burgison says. “There’s no such thing in Rhode Island as affordable housing.”

The average Providence resident pays approximately 35 percent of their income towards rental housing, the highest rate of any city or town in Rhode Island. By definition, housing is considered “affordable” when it costs less than 30 percent of a family’s median income; any renter paying a higher percentage is considered cost-burdened, those paying over 50 percent of their median income towards housingare considered severely cost-burdened. In Providence, 55 percent of renters are cost-burdened, which is even higher than the troubling national rate of 51 percent. More strikingly, Providence has one of the highest percentages of severely costburdened renters in the country. Using a survey of 36 major U.S. cities, Housing Works RI, an organization advocating for affordable housing, showed that only four major cities rivaled Providence’s rate of severely cost-burdened renters. In a phone interview, Nicole Lagace, director of Housing Works RI, explained, “In Providence—excluding the East Side— the average two-bedroom monthly rent was $1081. The annual income needed to afford that was $43,244. If we’re looking at a median rental household income of $30,000 that’s a huge lag in the income needed to afford an apartment in Providence.” Raising the stakes of this issue is the fact that 66 percent of Providence residents rent their homes, nearly double the national average of 35 percent.

Rents haven’t always been so expensive in Providence. Facing a staggering $110 million structural deficit following the 2008 recession, the Providence City Council began upping the tax rate ratio on rental properties in 2010 in order to cover the cost of, among other expenses, public education. These taxes are imposed on the non-resident owners of rental properties, but in practice the owners rarely bear the burden: when taxes go up, landlords raise the rents to make up the difference. This means that Providence renters now have a 75 percent higher tax rate than homeowners. Since renters tend to be in lower socio-economic brackets, this means that taxes are falling very heavily on the poor; a recent study released by the Institute on Taxation and Economic Policy found Rhode Island’s tax system to be among ten states with the highest taxes on the poor. According to the Institute, in 2012, the lowest 20 percent of income earners paid about 35 percent more than the top one percent in property taxes. The property taxes are further inflated to make up for the fact that tax-exempt universities and hospitals own 40 percent of the potentially taxable real estate value in Providence.

The 75 percent tax differential between renters and homeowners may sound familiar: the Providence Apartment Association has pasted the statistic on signs all over the city (excluding Blackstone, where most residents own their houses). The Assocation, headed by Keith Fernandes, began in 2010 when the initial tax levy was passed. Since then, the organization has been at the forefront of the movement against the tenant tax. In an interview, Fernandes explained that the city government has justified the high tax differential by arguing that the value of a multi-family house is less than the value of a single-family house. “There’s no way that the differential in values is 75 percent,” Fernandes says. “Why should residents of two houses on the same block that look exactly the same be paying wildly different amounts in taxes?”

Fernandes answers his own question: the city, he suggests, doesn’t care about its renters as much as it does about homeowners because “renters don’t vote in Providence.” This statement is clearly an exaggeration, but there’s truth in it too: almost 65 percent of renters in Providence are non-white Hispanics and Hispanic voting participation nationally has hovered around only 45 percent in the past decade. Additionally, a large segment of the renting population in Providence is students, who are also less likely to vote in local and state elections.

The Providence Apartment Association’s campaign has had some measure of success. The organization worked with other groups to pass an ordinance that will reduce, starting next year, the real estate tax rate on non-owner-occupied residential buildings from 175% of the owner-occupied rate to 160% of the owner-occupied rate. Mayor Angel Taveras previously vetoed the ordinance in July, calling the bill “irresponsible and ill-conceived,” citing estimates that the ordinance could cost the city about $6.6 million in revenue next year, money which would most likely be compensated for by raising taxes on homeowners. Despite the Mayor’s forceful objection, the city council overrode Taveras’s veto by a supermajority with 10 votes out of a possible 15.

While Fernandes emphasizes property taxes as a key factor in determining rental costs, the advocates working on this issue instead see these taxes as just one piece of the puzzle. Nicole Lagace, for example, suspects that many landlords wouldn’t decrease rents in the event of a property tax decrease, but would instead keep the extra revenue for themselves. In looking at other factors contributing to high rental costs, John Marcantonio, executive director of the Rhode Island Builder’s Association, believes that the most important factor in the high rental costs is the lack of affordable housing stock in Providence. Marcantonio explains that the housing stock in Rhode Island is made up of predominantly old, dilapidated, and inefficient buildings that require a lot of money to make livable, as well as a significant stock of foreclosed homes that have yet to be refurbished. According to Marcantonio, Rhode Island’s housing stock is the third oldest in the country.

A complex and inefficient system of permits and approvals hinders builders in Rhode Island from replacing this deteriorating housing stock and diminishes profitability. Many towns impose zoning restrictions, code requirements and development conditions that curb the development of rental housing and sometimes prohibit lower-cost housing altogether. These “exclusionary zoning” restrictions include minimum lot-size requirements, floor area ratios, land useintensity ratios, and limits on units per acre. Navigating all of these restrictions can take months if not years. Jim Ryczek, executive director of the Rhode Island Coalition for the Homeless explains, “Cities and towns can either choose to be very helpful when housing projects come up for proposal or they can choose to be unhelpful, using the mechanisms of permits and zoning to halt progress.” The waiting time for building in Rhode Island shrinks already-lean profit margins as interest payments on the land purchase continue. High-end projects are the only ones that yield enough profit to compensate for the waiting time, which makes for very few affordable housing developments. Since the recession, no more than 600 units have been built in Rhode Island per year, as compared with approximately 2000 in the years before the recession. Often, these restrictions result in shutting out low and moderate-income families, as well as post-college students from a Rhode Island’s communities. Marcantonio believes that some communities in the state intentionally use these restrictions to prevent families from settling down. “Many people in this state see children as a liability,” Marcantonio explains. “The cost to educate children is really high. People think that if they can prevent new housing from built, they can lower the amount they have to pay in taxes for education.” This suggests that if the state government were able to minimize its dependence on property tax dollars to support public education, communities might be more inclined to allow families to move in. “We have to agree as a community that children, young families, and college students are an asset, and create a lower cost structure to support those populations,” says Marcantonio.

A third proposed solution comes in the form of reevaluating the states’ attitudes towards density. Local governments often resist building more housing units in an effort to minimize density. Outside of urban centers, these efforts seek to minimize sprawl and suburbanization. Lou Raymond, executive director of the South County Habitat for Humanity says that in South County, limited housing stock leads to inflated rental costs, making the area, which consists of towns like Kingston, Narragansett, Charlestown and others, unaffordable for most people in the working and lower class. “People have philosophies about how they want to protect areas and have open spaces,” says Raymond. “I think people need to re-look at how we use land and allow some things that we haven’t done in a while.”

Marcantonio likewise emphasizes that conservationist inclinations need to be put on hold in order to provide living space for people in need. “Density in its natural form means affordability,” Marcantonio says. “We could add a lot more people to our cities if we changed our density regulations.” Raymond and Marcantonio feel strongly that increased density is the key to creating affordable housing stock in
the state, but the concept is fuzzy. Does increased density mean building new affordable housing units on empty lots or in foreclosed properties that have been boarded up for years? Does it mean building additional floors and accessory units on already existing buildings? Or does it mean squeezing additional families into already packed affordable housing developments? In many cases, the question of density becomes a negotiation between quantity and quality of life.

A final consideration when looking at the affordability of rental properties in Providence is utility costs. The cities’ old housing stock is filled with non-insulated lead and pestinfested buildings that new renters are responsible for fixing. Nicole Lagace insists that creating affordable housing could be as simple as “weatherizing buildings, replacing windows, and making utilities cheaper.” Lagace believes that it is the owners’ responsibility to fix these homes but that owners often don’t have the resources to do so. Organizations like the Rhode Island Alliance for Healthy Homes, a partnership of local agencies (including Green and Healthy Homes Initiative Rhode Island, Rhode Island Housing, Inc among others) is stepping in to make Rhode Island’s housing stock more energy-efficient and environmentally safe. This organization is also involved in refurbishing foreclosed homes into livable, affordable housing. However, limited funding means that the organization can’t serve everyone in need.

The problems facing Rhode Island are extreme but not unique: local governments have faced criticism for housing policy everywhere. Even in cities where governments have managed to provide large-scale public housing, countless challenges remain: violence and poor living conditions are a staple of many subsidized developments. Yet relying on the private sector to provide affordable housing presents its own problems: the ups and downs of the market and the whims of property owners are too unreliable to put a stable roof over everyone’s head.