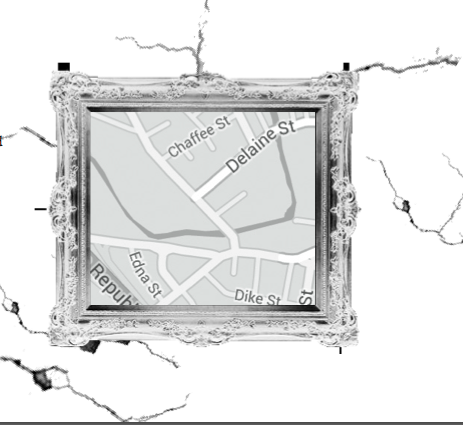 To get to Yellow Peril Gallery, you take the ninety-two bus west, passing through downtown Providence and Federal Hill. Get off at the stop variably named Price Rite/Eagle Square/ Valley Street, soon after the bus enters Olneyville. Take a left and walk down Valley Street, past Donigian Park, and turn at the second historic mill complex refurbished for hip artistic endeavors and light industrial use. The first such structure in this neighborhood is Rising Sun Mills, but you’re looking for The Plant. You can find Yellow Peril Gallery in Building 5.

The gallery shoulders up alongside triple-decker apartment houses in need of paint, a scrap metal company, and a smattering of empty lots. Its newness alone represents a spatial rupture. The Plant, as well as Rising Sun Mills up the road, is an anomaly within a largely Spanish-speaking immigrant neighborhood for young professionals, artists, and business owners who are attracted to Olneyville’s reputation for an underground art scene and its industrial past.

There are several discourses on what Olneyville means to its residents—whether it is a supportive working-class community, an up-and-coming neighborhood for the creative class, or a post-industrial wasteland, gutted of its factories and drained of its population. These identities are not necessarily incompatible, but still, the story is familiar. In time, the group that has the most capital and privilege wins out and transforms the built environment in its own image.

Yellow Peril Gallery seems aware of the need to navigate these tensions. The gallery’s mission statement encourages community participation, and ten percent of their art sales are given to a charity of the artist’s choice. The gallery recently hosted an oral history of the neighborhood curated by Olneyville Housing Corporation, a local nonprofit. I stopped by on the gallery’s day off to talk to gallery owners Robert Stack and Vanphouthon Souvannasane about their take on art, place, and politics. Stack (a Providence native) and Souvannasane have the rapport of friends and business partners who already know what the other is going to say.

The College Hill Independent: Let’s start off with your perspective as curators: why did you choose to locate in Providence?

Robert Stack: We actually specifically came for Olneyville. [Co-owner Vanphouthon Souvannasane] found the space originally online. I grew up in Providence and Olneyville was in some ways quite different then, so when he first suggested it, I was like, “Absolutely not!” He brought it up again and we looked at it and said, “Oh, this is really cool.” It was a work-live situation, which was what we were looking for. The whole building is work-live apartments for artists, so we were attracted to that. We just made this conscious effort that we would have the gallery where the artists were making the work, and that would keep it fresher and keep us more tapped into the scene and what was happening.

The Indy: I know you also do Art Basel and some international art fairs. How do you navigate being plugged into the local art community but also trying to have an international presence?

RS: The first thing that comes to mind is a pop-up show we did in Bushwick called Work Harder. That was a crossroads for us because it was during Freize Week; we weren't in the Freize Fair yet, we hadn't yet been invited to our first major fair, so we did our own. We got a space in Bushwick and we mounted our own group show. We gave an opening and everybody came. In one way, it was important to us because it showed the Fair people that we could do it; then we started getting invited to fairs. But it also became sort of what you were talking about—it was a group show of all the art that we were interested in that fit our mission statement, and it was a combination of people we had met in the time we'd been in Rhode Island, people we knew before from when we were doing this in New York, people we knew internationally that we had come to know through the gallery. It was this great mix: painting, photography, illustration, with this big melting pot of different media in contemporary art. But there were also these ideas of showing the local versus the international, so that sticks out to me.

Vanphouthon Souvannasane: It was great to follow through on a commitment. When we met a lot of local artists, we talked about strategy and what we hoped to achieve. Sometimes we got this look, like, “You guys are just out-of-state bullshitters. You say you'll take care of your artists, you say you'll take us to fairs, but how much of that is true?" And for us, it was a challenge. Yes, these are things we'll hope to do, and this is what we'll do on a strategic level to get there, and so far everything's been falling into place and we've followed through on a lot of our commitments.

The Indy: I’m curious about the name of the gallery—it clearly has a lot of political connotations. What made you choose it?

VS: It's had its controversial moments. I grew up on the East Coast, and I didn't really understand this whole concept of “the yellow peril” until I read A Separate Peace in high school. I thought, "Yellow peril, what a weird slur to call someone." It wasn't until I was in college that I learned more about the history of Asians in America... For someone who grew up around mostly non-whites, I didn't really have an understanding of my place in history, so it was pivotal for me in terms of understanding who I am, where I came from, and how people see Asians in America. So I took it in an empowering way. A lot of young people who come to the gallery ask, "What does Yellow Peril mean, what's so threatening about the color yellow?" A gallery with a name like "Yellow Peril," it's provocative but at the same time you're able to have conversation with people about context, and a lot of what we do here at the gallery involves context...

I think "Yellow Peril" for me is finding confidence in your heritage and who you are. For artists, it's important, and also for political reasons—I think it's important to remind people that not everything is as bright or as cheery as it seems. That doesn't mean it's a bad thing, it just means that you have to be cognizant of history.

RS: One of the lines in our mission statement is about “showcasing art that creates a conversation that will last after the viewer leaves,” so that's the reason we show a lot of topical stuff and some political stuff. But I think it’s also important that the name of your gallery has that same point of view. So, the name is provocative, and a conversation starter, and indicative of a lot of the work we show.

The Indy: Your mission statement names “inclusion, diversity, and participation” and “giving back to the community” as some of your central goals, which is pretty unique for an art gallery.

VS: I think it's unique for a commercial gallery. We are a commercial gallery—our business is the business of selling art—but at the same time, it doesn't mean we're heartless. Having been involved in nonprofit organizations in other ways, you want to give back to where you live. That's how you have a more fulfilling life. You can't just take the money and run, you have to really celebrate where you are. The only way to reach different audiences is to be inclusive; snobbiness or elitism is not what we’re about. We like to engage with people who come in; we like to walk them through the works.

RS: Galleries are interesting because, on one hand, it's a business model that's kind of like a hardware store; I have something to sell, you have something you need, you come in and I sell it to you. But it actually operates more like a coffee shop or a bar, in that it becomes a social setting. It's quite a hub for the artists and the community; they meet each other at the opening and form new friendships. So there's a community center aspect to it, because it becomes social as well as commercial. It's like a hardware-store-slash-coffee-shop.

The Indy: How is your work informed by your location in Olneyville?

VS: We are probably the only gallery in the entire state that showcases work from contemporary Latin American artists. We have a strong base of contemporary Latin American artists, like Raquel Paiewonsky from the Dominican Republic, Quintín Rivera Toro from Puerto Rico. We also have Diego Rodriguez-Warner from Colorado, Rodrigo Nava, who’s Mexican, Anabel Vásquez-Rodríguez. We try to work with artists who we think would connect with the community. A lot of these artists’ work is political; it deals with issues like race and gender. So when we've had shows with these artists, we've hoped to bring in a different demographic other than the normal art crowd. We've been on Spanish-language radio, doing interviews. We've been in the Spanish press and I can't speak Spanish, so that's kind of embarrassing. But at the same time, a lot of the issues that these artists encounter resonate with the community. And, as a minority, I understand what they're going through. So we work a lot to promote their point of view.

RS: It's a very interesting neighborhood with the river and the mills, and it's really great to get to know it on that level. I grew up in Elmhurst but since I've been living here, I've found out how much my family had ties to the neighborhood. But by the time I came around, they had moved out. A couple blocks away, my uncle had opened up his first business; my dad's first job in Rhode Island was in Olneyville Square. There's all this genealogical, archeological sort of stuff. In a way, I'm not only getting to know the neighborhood better, but also my relationship with the neighborhood that I didn't realize was there before.