Race, Money, and the NCAA 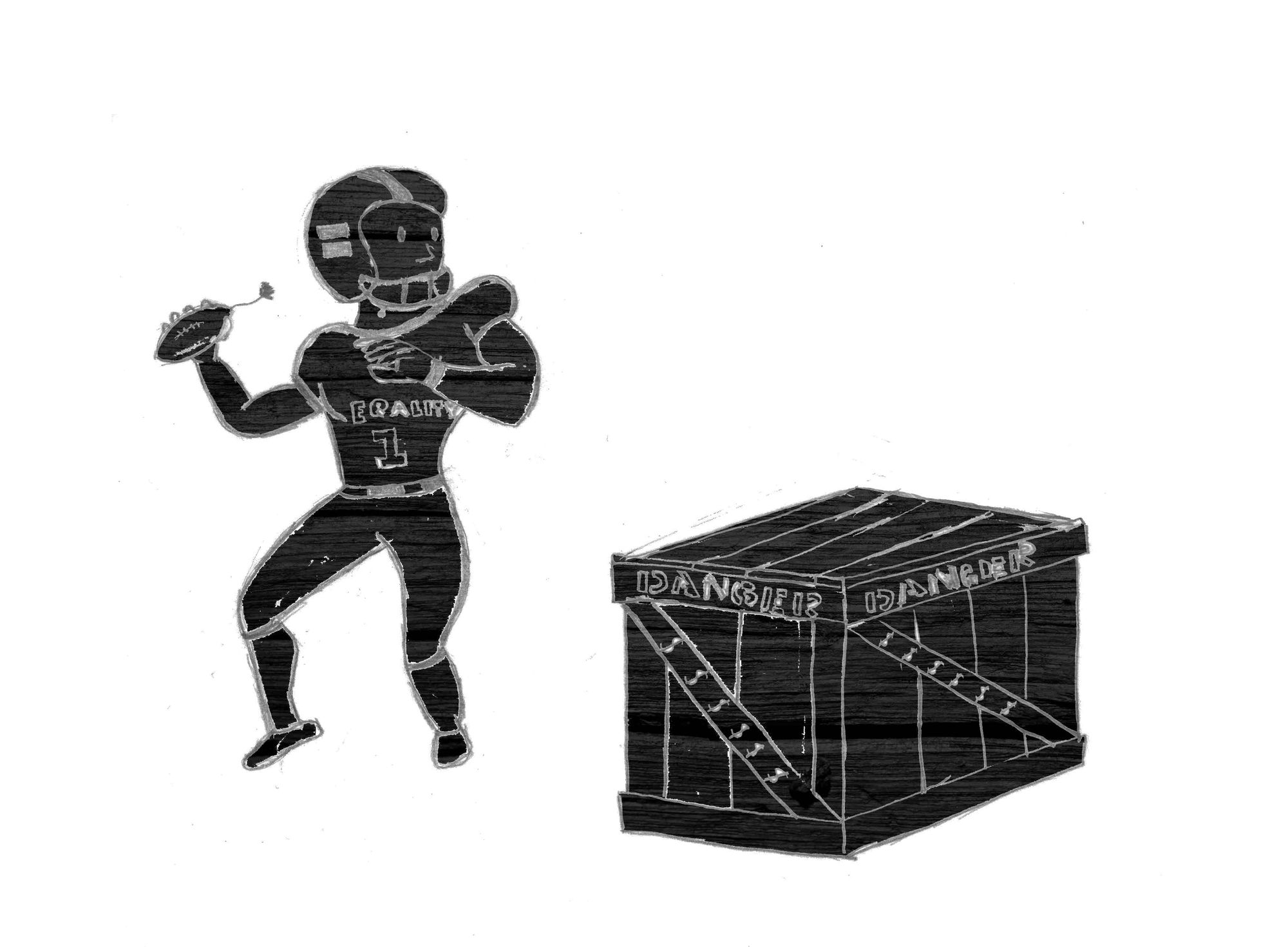 The NCAA, a non-profit institution with 501(c)(3) tax exempt status, is governed by a Board of Directors—eighteen college administrators and NCAA officials, seventeen of them white—who vote on rules that determine everything from recruiting guidelines to eligibility standards. Though not able to dole out profits to shareholders, the organization generates roughly a billion dollars in yearly revenue and pays its top officials over a million dollars a year, mostly off of the work of black football and basketball players. “Ninety percent of the NCAA revenue is produced by one percent of the athletes,” said Sonny Vaccaro, a marketer who ran successful sponsorship campaigns at Nike, Adidas, and Reebok. “Go to the skill positions,” the ones who bring people into the stadium, the ones whose jerseys sell out and whose faces are on billboards: “ninety percent African Americans.” Dale Brown, a retired Louisiana State basketball coach, has also come to see the racial dynamics of the college sports industry: “Look at the money we make off predominantly poor black kids. We’re the whoremasters,” he said in 2011. But as mostly white university administrators, NCAA officials and college coaches make millions of dollars, the Board prohibits its athletes from receiving any compensation above their scholarships. Schools can’t pay them to play; agents can’t sign them to contracts; shoe companies can’t offer them endorsements. The Board even regulates moneymaking endeavors that are seemingly tangential or even unrelated to athletic participation. Athletes can’t model; they can’t endorse products; they can’t become brand ambassadors; they can’t use their names or pictures to advertise businesses they start; they can’t receive free meals from local eateries. No money can be made using their name, image, or likeness in fear that their status as a student-athlete will have contributed to their profitability, rendering them professionals. It’s effectively ownership.

And the free education, their current payment for athletic services, offers little benefit. Thrust into an environment that values athletic victory over academic achievement, many athletes, especially black athletes, don’t earn a diploma. A study by the Knight Commission on Intercollegiate Athletics describes a near-professional culture in which “athletes are often admitted to institutions where they do not have a reasonable chance to graduate... As soon as they arrive on campus, they are immersed in the demands of their sports.” The graduation rate is roughly 70 percent for Division I football and basketball players, and the number is often 50 percent lower for black athletes. In 2013, Florida State graduated 90 percent of its white football players, compared to only 38 percent of its black players.

The whole system seems more suited to a 1950s white suburb than a 2014 diverse national audience. And yet, its breed of racism also seems wholly modern—a system built around purportedly race-neutral rules negatively affects one group more than another. It’s what we see in the prison industrial complex: a body of law that makes no mention of race incarcerates five times more black men than white men. Phillip Goff, a social psychologist at UCLA writes, “Most of the way race functions is without the need for racial animus.” It’s not that the NCAA offices are filled with children of the Jim Crow South; it’s that the NCAA has put in place a system that benefits their administrators (disproportionately white) while hurting their athletes (disproportionately black) who produce value. But for most viewers, this “racism without racists” is invisible, shrouded in ambiguities and impenetrable euphemisms.

The NCAA’s stated mission is to “initiate, stimulate and improve intercollegiate athletics programs for student-athletes and to promote and develop educational leadership, physical fitness, athletic excellence and athletic participation as a recreational pursuit.” Within this mission statement, though, is a vocabulary constructed to legitimize the system in which a predominately white NCAA has total control over a predominately black group of student-athletes. Words like “initiate” give the organization carte blanche authority to create rules about what athletes can and cannot do while words like “improve” endow the ability to punish any transgressors who it finds to be guilty. “Student-athlete” is a highly political term crafted in the 1950s to defend the NCAA against workers’ compensation claims for injured football players. “Athletics participation as a recreational pursuit” elevates the amateur student-athlete who participates for the love of the game over the professional who plays for compensation; rules, then, are created to ensure that athletes remain unpaid. This political doublespeak rings Orwellian: “Defenceless villages are bombarded from the air, the inhabitants driven out into the countryside, the cattle machine-gunned, the huts set on fire with incendiary bullets: this is called pacification.”

On August 8, the NCAA Board of Directors voted to give the 65 universities in the five major athletic conferences (the ACC, Big 12, Big Ten, SEC and Pac-12, plus Notre Dame) increased autonomy, allowing them to create different rules than those that govern the 285 other Division I schools. This autonomy includes recruiting standards, the size of coaching staffs, and permissible practice hours, to name a few, but the impetus for this realignment is rooted in money. The aforementioned 65 colleges generate massive profits from football and basketball; UT Austin, for example, makes over $60 million a year on its football team alone. They want to be able to give their student-athletes stipends above the cost of a full scholarship. The latter colleges, which have less lucrative television contracts, can’t afford to do so. A day later, on August 9, a federal judge ruled that universities with Football Bowl Subdivision football or Division I basketball programs will have to pay their athletes “a limited share of the revenues generated from the use of their names, images, and likenesses.” In practice, this means colleges must put at least $5,000 per athlete per year into a trust fund accessible upon graduation. Given that only 23 athletic departments are profitable, it’s unclear where the money is going to come from, especially for those colleges in conferences without major network contracts.

From these financial disparities, writer Alexander Wolff prophesies a disintegration of the college sports machine.Set in 2039, Wolff’s recently published thousand-word Sport Illustrated essay entitled “Members Only” describes a forthcoming reality that, when we look back, will have started with that fateful August day. “Don’t things that come to pass have a way of seeming inevitable in retrospect?” he asks rhetorically about our future-past. And what has come to pass in Wolff’s world-in-thought a quarter century from now? Governed by separate rules and funded by higher television contracts, the 65 schools are able to lure high profile recruits with more and more money, and competitiveness between the athletic haves (Duke, Michigan, Alabama) and have-nots (Butler, Creighton, Brown) disappears. Without the possibility of upsets or Cinderella stories, March Madness and its correlate bracket are stripped of their fun, nobody watches or joins the office pool, and the tournament ceases to exist in its current form. Gone are the unending days of competitive intrigue at Buffalo Wild Wings. The NCAA goes bankrupt after losing its $10.4 billion TV contract with CBS, which accounts for roughly 90 percent of its revenue, and the rest is history—or, rather, the future. It “all happened the way Hemingway described going broke—gradually, then suddenly,” he reminisces. His piece reads like a kind of college athletics eschatology.

Wolff is bracing himself for universities that merely educate, and he isn’t the only one. Big Ten Commissioner Jim Delaney foretells the end of college football if players are paid. Jonah Rosenbaum, an LA-based writer and avid Michigan sports fan, told the Indy, “Nobody wants to see their college’s players paid. There’s commercial value in fans thinking these college stars are just like the rest of us in every way other than they’re amazing athletes and we’re not. Paying players will ruin the façade, and that’s what we’re buying—a beautiful, empty façade. The moment it comes crashing down, so does the whole industry.” If the NCAA can’t survive fairly compensating athletes, can’t survive building a system on truthful language, can’t survive remedying its post-racial racism, perhaps it’s time to let it collapse. Or, even better, blow it up.