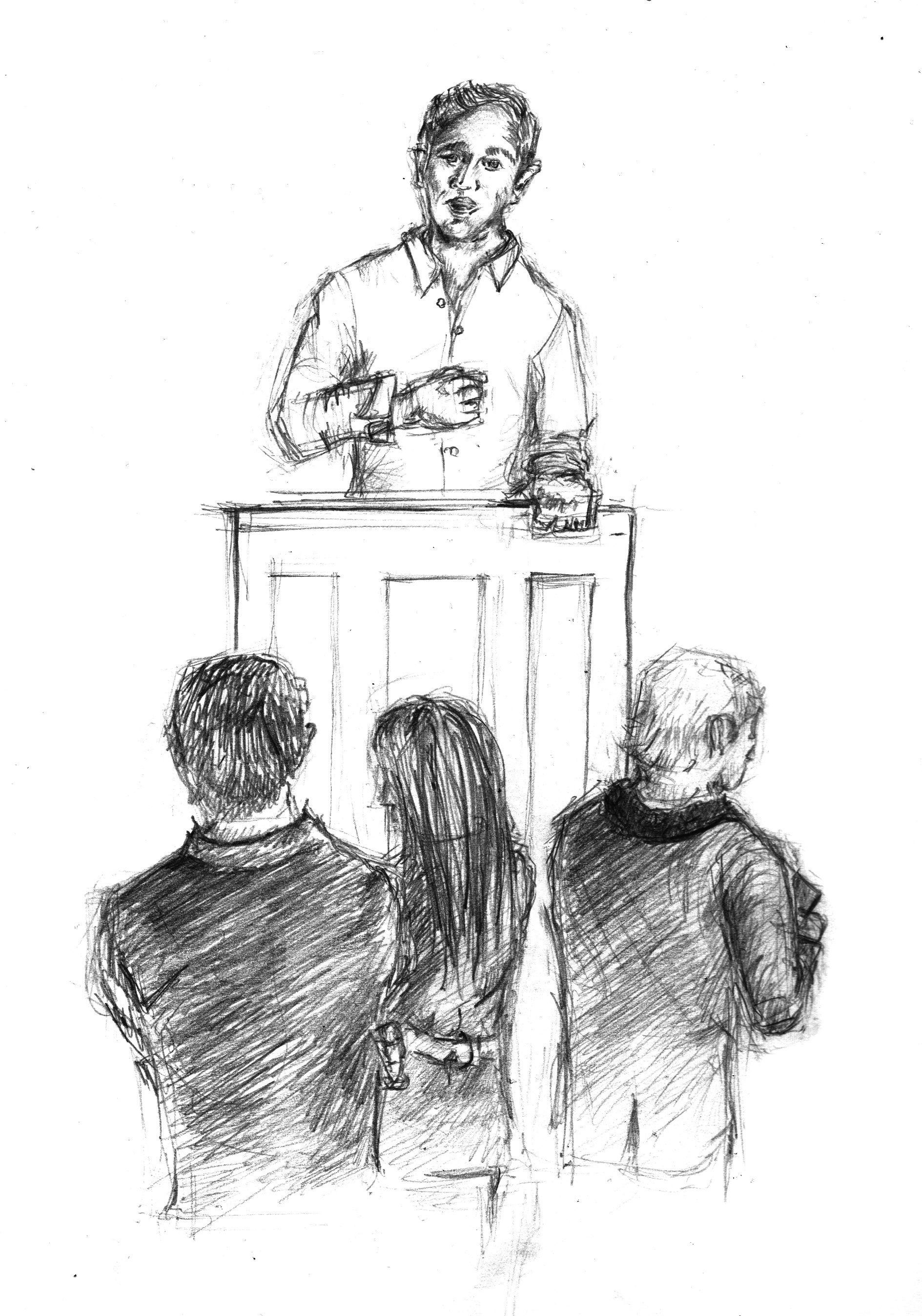 H.D. Davidman  is running for public office with the hope of defeating D.H. Benjamin of the incumbent party, FTRPRTY (not an acronym—pronounced with the elided vowels “Future Party”).  FTPRTY is a breakaway party founded by a group of wealthy Silicon Valley investors and CEOs who, having “changed the world” with their technological innovations, have now turned their sights to “changing Washington.” Their slogan: “if government ran like a lean start-up, then it might be able to get something done!”

D.H. Benjamin is a young copyright/immigration lawyer who recently announced his intenion to run for re-election at the Alligator Alley Showdown and Design and Tech Festival. Formerly a gathering of gator poachers, AASxDTF became a mecca for Silicon Valley types after Burning Man and South by Southwest lost their novelty. Just yesterday, Benjamin spoke via silent rave headsets to a large crowd in Seattle, Washington about his vision for the future.

Here, Davidman recalls the great soaring rhetoric of the speeches of another era, takes the stage, and offers a rebuttal.

Today, May 2 in the year 201X, things are working. My computer, my television, my phone…all my devices are working. Not just working: working for me.

From when my eyelids open to when they set, that fruitful bevy of devices upon which I discharge my daily tasks functions with a complicit grace that merits awe. Might this be the immaculate experience of progress? Will this tide usher in solar-powered vessels to colonize the sea of daily life? These small interactions, to borrow a phrase out of the elegant parlance of FTRPRTY, bare no signs of friction.

But, what is this friction?

Friction is the not-working that either occasions or interrupts the machinations of technology. It is the malady upon which technology operates. It enters life from the rotten seed of dysfunction planted in the soil of entropy. It is to friction that Mr. Benjamin objects! We assiduously harvest our energies only to spill our produce on the turbulent road to market our wares. May we not correct this turbulence by paving this road? Must all roads produce friction? All this Mr. Benjamin demands to know.

D.H. Benjamin loathes friction. He paints himself as a modern man who sees in technology a way out of the degraded grasp of inconvenience, the depraved hold of conflict.

For Mr. Benjamin, technology is an infinite hammer in a world of nails. It arrives at the ready. Mr. Benjamin says that we must hammer the world until all its diverse timber is bolted in its proper place. These problems, according to the most basic axiom of the doctrine of technology, beg for solutions. This word “solution”—this is what our opponents claim to love. “We want solutions!” they cry. “No more argument, dysfunction, malfunction, partisanship! We want solutions!”

For Mr. Benjamin and his FTRPRTY, the nail wants the hammer more than hammer wants the nail.

Yet, here we must stand weary. Do not be seduced by the desire for an elegant transcendence, this false promise of techno-salvation. Do not succumb to this blindness. This blindness cannot see that the world is far more than a puzzle book whose puzzles come endowed with great and elegant solutions.

Under the veil of this blindness, we may be led to solve problems incorrectly. We may even attempt to respond to problems where we merely imagine them to be.

Nowhere is this zeal to frame the world as a bug ready to be bugged more troubling than in the realm of politics. It is from here that Mr. Benjamin, and the FTRPRTY party crave an escape route. "Politics is a prison," they say. They promise a way out.

Mr. Benjamin and his supporters talk about “smart government,” about “government 2.0,” about “disrupting Washington.” They tell us they changed the world—so they must be able to change Washington.

Yet, how exactly did they change the world? More importantly, what does technology brings to politics?

“Connectivity.” Silicon Valley tells us that we can now engage with, and understand people all over this earth. Question this. Perhaps connection is good. But do not presume that such connection inevitably leads to democratic progress. We connect with connoisseurs of our same passions but how about those with whom our sensibilities differ? Are we really connecting with strangers?

“Creativity”—that’s what technology brings. Yes: Silicon Valley has done amazing work. But “creativity” makes for a nebulous value. Struck with the blindness, the FTRPRTY does not see how political creativity and tech sector creativity may be different beasts.

“Efficiency.” We are told: “Government gets things done tomorrow, Silicon Valley gets things done yesterday.” Maybe so. But the government may respond to priorities other than efficiency. Many of the mandates in politics are not efficient: patient deliberation, thoughtful analysis, and careful decisions .

For Mr. Benjamin, technology’s solutions stand in glorious contrast to politics. Politics is conflict. Conflict tires us, exhausts us, repels us. They claim it tears us apart, that it zaps our imaginative spark and productivity with bureaucracy and regulation.

For them, politics is friction.

Mr. Benjamin shrinks from it! To him, politics and technology appear as opposites.  Conflict is bad and must be fixed. Technology fixes. Therefore, technology should offer the solutions to the problems in politics.

Politics furnishes us with the tools for not only tearing apart, but also sewing together. We will always disagree in our firmly held faiths that furnish us with our morals, our cultural commitments, our personal goals. While this disagreement will lead to bickering inefficiencies, is it not also something worth protecting? Is it not the condition that allows the vastly different people of this world to live lives of meaning and direction?

Technology claims that it is a Way Out. In doing so, however, technology elides its own ideology with its values, interests, and particular beliefs. This savior arrives with not a little luggage!

Technology is always a product of the social context that gives it life. Technology is made by people, determined by their priorities, and shaped by their interests. Before you can retrieve a virgin device from its impeccable packaging, it comes marked by fingerprints of its maker.

The scions of technology deny this. They say, “We are not men of politics! We are men of solutions!” Not men of politics? Well, their ideology and their actions speak the opposite truth. The tech sector, for all its post-political hubris, seems to be thoroughly mired in the timeless mud of politics.

Silicon Valley takes stances. FTRPRTY could not otherwise exist. Some of these stances reflect how technology, in its Silicon Valley home, is fundamentally constrained by the dictates of a capitalist market. This is alright. Ladies and gentlemen, do not think that I am here criticizing such constraints: no, I am criticizing only the tech sectors’ eagerness to falsely disown them. They do not stand quiet on principal issues of our day—intellectual property, immigration, net neutrality, regulation, and surveillance. Their positions may or may not be right. But they sure as the seasons are political and must be recognized as such.

Technology does not just solve problems, it creates them too. We are losing jobs of all stripes to automation, and we are told that new jobs will return in the future. We are told to wait, to sit tight, to further educate ourselves. We are told about a wave of green jobs, the knowledge economy, the sharing economy. I do not want to be a pessimist, ladies and gentlemen, but when will these jobs arrive and what will they be? Will we be paid to dust the windmills, to swipe clean the solar panels? Will we cash in en masse on our own apps? Will we make a living renting out our homes and cars?

The giants of Silicon Valley, for their mighty wallets, employ too few. This is not malicious. It is the simple reality of the business model.

If we run a government like a start-up, if we legislate like we’re coding software for a dating app, we will not be solving politics! We will be ignoring politics! To do so reduces the ability for our democracy to ensure that societal arrangements are continually worked over and debated. This debate is not just hot air. This debate is what ensures that our society has a foundation around which to cohere.

We must challenge the FTRPRTY ideology before its consequences become too difficult to turn back.

I too stand in awe of the invention and vision of Silicon Valley. I do not stand opposed to technology. Such a position would be neither sensible nor even coherent. FTRPRTY, I welcome you to play the eternal game of politics. But you shall not wreck the board upon which it is played and then call the game won.

My name is H.D. Davidman, and I am running for…