This History Is Not Yet Ancient

the preliminary self-archiving of the Jewish city of Cochin 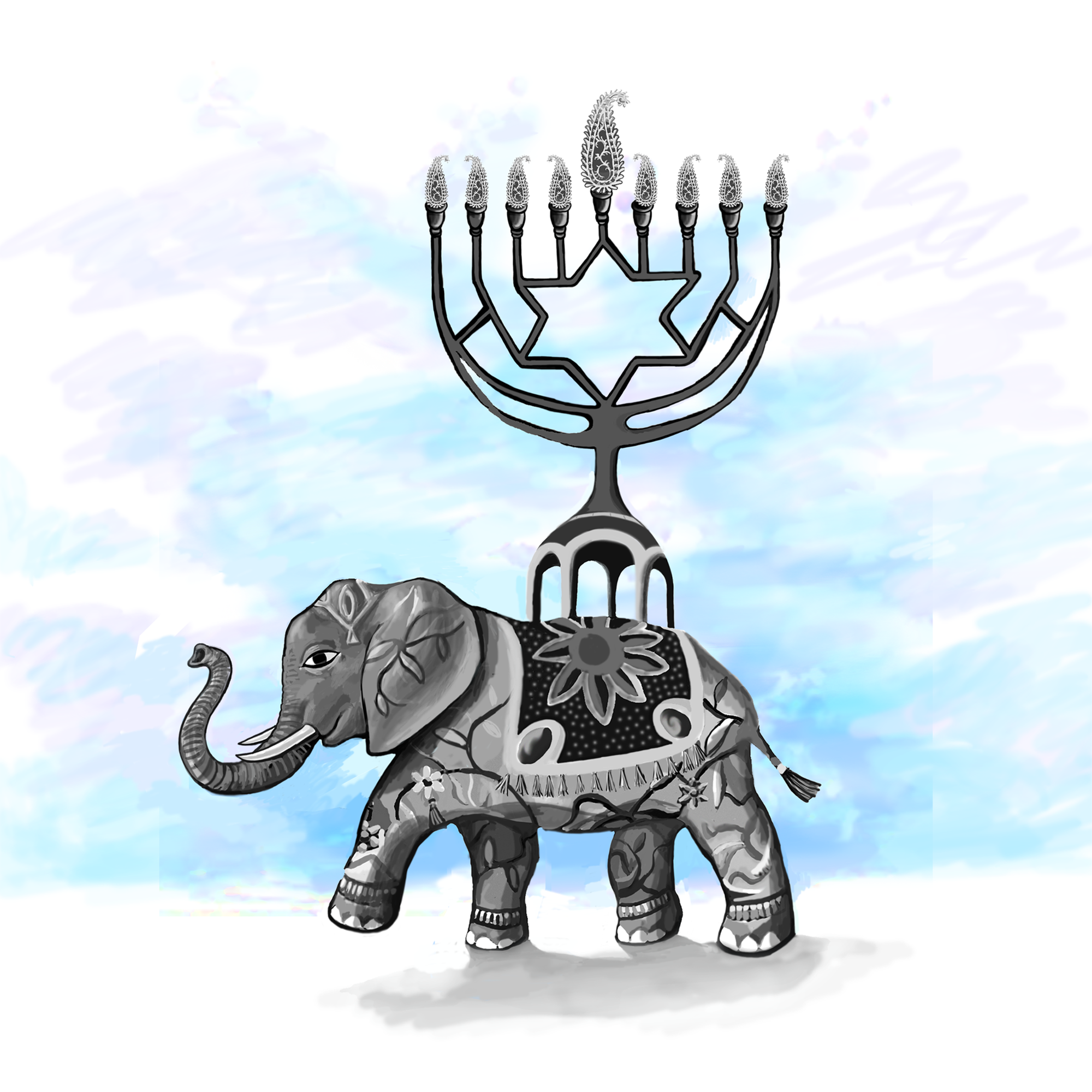 Yarmulkes are a sight unseen among the saffron hills and tea plantations of India. But when I visited Cochin, an Indian city that was once home to a large Jewish community, I saw traces of the material representations of Judaism–yarmulkes, challah covers and Torahs. A fishing village in the Marxist-run state of Kerala on the southwest coast of the Indian peninsula, Cochin had a thriving population of native Jews as recently as 50 years ago. Today, it is a popular tourist destination for its old paradesi, or “foreigner” synagogue, and for the area surrounding the old Jewish settlement, known without irony or derision as Jew Town.

The fabled Jewry of Cochin have all but disappeared from the city that bears the imprints of over 2,000 years of their influence. There is a synagogue surrounded by gates studded with Stars of David and shops, run by Kashmiris selling mezuzahs and menorahs next to displays of pashminas and turquoise jewelry. But the people have almost all left, surrendering the effects of their history to outsiders. They have not died, but merely relocated to Israel, in a grand display of the triumph and power of a Zionist dream. The 11 individuals that remain are childless and over 80, growing old and increasingly hostile toward the tourists who crawl through their streets and gaze with wonder at their wrinkled faces and bejeweled Torahs.

To visit Cochin today, to witness the ghostlike state of the synagogue, is to find it difficult to believe that the city ever had a thriving Jewish community. But along with its chaotic and dizzying history of sultanates and spice trades, India does have a history of Jewish populations–ones who have thrived, who have existed for centuries and who were spared the persecution faced by their distant relations in almost every other country in the world.

The Antiquities of Cochin

The Cochin Jews are the oldest such group in India, followed by the Bnei Israel community in Mumbai (formerly Bombay) and then the more recent community of Baghdadi Jews, who descend primarily from Baghdad but spread throughout India to escape persecution from other areas of Iraq and the Middle East. At the Cochin community’s peak during the 18th century, there were as many as 2,000 Jews living in the city, divided into three groups that mimicked the Hindu caste system in India.

Historically, Jews as a population have been treated with great respect within India. The recent terrorist attacks on Mumbai, which included targeted violence against the orthodox Chabad house, came as a shock in a country that had accepted the Jewish population’s religious freedom for so long. In an interview with The Jerusalem Center for Public Affairs, Nathan Katz, the author of The Last Jews of Cochin: Jewish Identity in Hindu India, said, “The Cochin Jews were for a long time a privileged minority. Among them were prime ministers, generals, shipbuilders and international merchants.”

Amidst all the talk of the history of this obscure community, it is easy to forget that this history is not yet ancient, that Cochin Jews, even if they are hard to find, continue to live in India. The Jews of Cochin blend in with their Hindu neighbors, praying in the Malayalam tongue of Kerala and worshipping in salwar kameez and saris.

The one Jew whom I did meet was the woman who collects the two-rupee admission fee outside of the synagogue. She wore the typical salwar kameez and spoke a little English. When I tried to ask her about living in Cochin she was hostile and rude, refusing to recognize herself as a rarity in any way, as a subject arousing interest. As evidenced by her response, the city’s tourist industry seems decidedly premature, packaging and advertising a people who are not yet gone.
There is nothing malicious or even intentional about Cochin’s conversion into a tourist site. But I couldn’t help feeling a sense of dread walking past the upscale boutiques on Synagogue Road, an uncanny experience akin to what it would have felt like to walk through Pompeii knowing that tragedy would soon strike.

There is something eerie about the place, something hollow and empty. It is a ghost town in impatient waiting. The city has already begun self-archiving: bronzed and historic signs with dated inscriptions line its streets, brochures recall the days when Jew Town was the site of a thriving spice market. But this archiving longs for a history not yet bygone. It may be hard to hear the voices of these remaining pioneers, but they do exist; you must strain your ears for sounds beyond the eager calls of shop vendors, adjust your eyes to a reality that exists in a separate sphere from the politics of Zionism and diaspora.

Yours, Mine and Ours?

In an interview with the South Indian daily paper The Hindu, chief warden of the Paradesi synagogue Samuel Hallegua described his identity as a White Jew in Cochin, whose family history in India dates back to 1592. “I belong to here as much as I am Jewish,” he said. Despite pressure to move to Israel, Hallegua was content in India, proud of his language, of his community’s unique additions to Jewish rituals. “I’m a proud Indian,” he said. “I’m also a Hindu in an apolitical sense.”

Still, the urge to move to Israel after the country’s establishment as a Jewish state in 1948 proved too powerful for many Cochin Jews to resist. The Jewish diaspora has at its heart fantasies of homeland, of returns and protection, and rescues from years of persecution and memories of pained exodus. For many Jews around the world, the formation of the Jewish state was a promise of freedom–to practice Judaism and to live with full mobility.

But for the Jews of India, who faced little anti-Semitism, the¬†motives were different. Just a year before the creation of Israel, India gained independence, and with it Jews lost some of the political powers they had been granted under the local maharajah of Cochin. When India’s first Prime Minister Jawarhalal Nehru banned the import of luxury goods, many Cochin Jewish traders lost their livelihoods’. As Jews began emigrating to Israel and the community dwindled, others followed in a self-perpetuating cycle.

What remains today is an unlikely mix of tourist and local, of those who stare and those who are stared at. The Paradesi synagogue is open five days a week, between 10 AM and 12 PM and 3 PM and 5 PM, and is completely closed to the public during services. The remaining Cochin Jews still view the presence of tourists as an oddity and an interruption.

Hallegua said, “As the warden of the Synagogue, there is pressure on me to keep it open throughout the day. Hundreds of feet pounding the blue and white hand-painted Chinese tiles, which were paved as long back as 1762, may cause the color to fade.” Even Jewish tourists, he notes, aren’t always respectful of service hours, “banging the doors of the Synagogue when the prayer is on.” Jewish tourists seem to view the Cochin synagogue as their own, a place to which they should have unrestricted access, a privilege they have already been automatically granted. At the doors to the synagogue, I saw Israeli tourists who were at first denied access due to the length of their skirts arguing with the Indian man guarding the door. “This is our space, not yours,” the women said.

Questions of ownership and rights may become even trickier once the few remaining Jews in Cochin are gone. Their memory will still be there, but the synagogue will not remain active, and ‘Jew Town’ may become stomping grounds for tourists and those who capitalize on them. Unlike many chapters of the Jewish community’s story, this one will end with a reversion back to the land of origin instead of an abrupt termination characterized by violence and hate. Still, there will necessarily be something lost in the journey back from India to Israel, something not transportable in suitcases, unrecognizable on passports and immigration applications.

Cochin may continue to exist in the Jewish imagination, but its cobbled streets will eventually relinquish their history–holy rains, memories of trauma and grief–and fade away.

ALLISON ZIMMER B’10 did not leave without a fight.