Walking in the Ocean 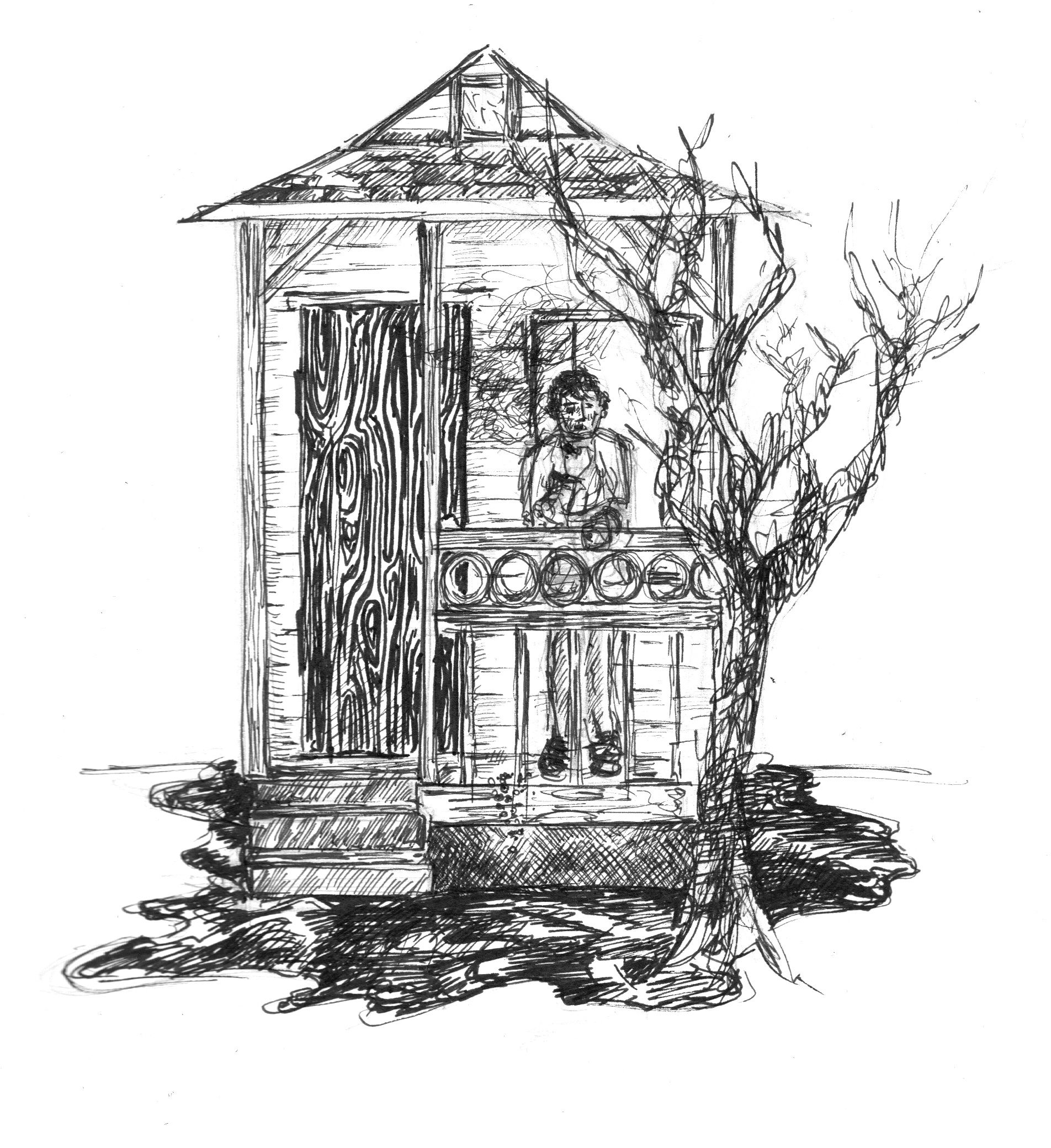 Their last morning in the old man’s house, Alice woke and found George out of bed. She rose to her elbows and saw him through the window, leaning on the porch railing, a cigarette in one hand. No possibility of returning to sleep now but she spun in circles of breath, her own breadth and the breadth of babies suckling congealed air. Cooing from the next door neighbor’s bird feeder, tinkling of necklaces draped on the fence posts.

She remembered how the old man used to sit on the porch and tell the pedestrians to take a necklace. There were gold necklaces for power, purple ones for justice, green ones for faith. He dispersed himself in a thousand pieces, the beads shimmying in a thousand clubs, smashed on a thousand corners, traversing to places he’d never been. She and George had watched his disintegration.

They had come to the city to volunteer, two months after the hurricane. At first they’d lived in their RV, and then they’d moved into the old man’s house and taken care of him until he died. He’d been black, with yellow palms. Gangly and diabetic and alone. There were stories of his days as a flag boy, parading the streets in a golden-feathered robe with a beaded helmet. Sometimes he would point to the face on his T-shirt—usually a dead Mardi Gras chief, with the words “Rest In Peace” and the man’s name on the back—and say “Alice, you’ve got to hear the chief sing!” Or he would send her to the addresses of his favorite bars, and she would get there and find a ceramic gallery. He hadn’t had an inkling of how the city had changed and would never have predicted, once he was dead, that she and George would receive an eviction notice.

With her eyes still closed, Alice imagined entering through the gate, past the necklaces and the oak tree smothered in Spanish moss. As if she was a young lawyer with a federal department. She’d been exploring the neighborhood, seen the real estate agency’s sign on the fence and decided to wander in. “What a cute house,” she’d say as she approached.

But George was in the way. He stood on the porch, staring at her, the intruder.

She wished George would come back to bed but he was like the leering statue at the end of a bowsprit. He was awake and had forgotten how to tumble in sleep. She opened her eyes, spread her thickening legs across the mattress, and thought of those mornings when they had risen to the call of needs. Drinking from the faucet, peeing in a bucket, feeding the old man Kit-Kat bars. Now there were new needs, and she opened the buttons of her blouse.

When he died, she was carrying one baby inside her and one on her lap. One breast white with foam and the other yellow with butter: a marsupial. People at home, her classmates from college, her siblings in New York, thought she was crazy. Her mother asked how did it happen—as if it had been the result of contamination. Everyone thought she and George had made a mistake, but it was the babies that had helped them cope, had helped distract the old man, had gained the neighbor’s trust.

As they fed, Alice looked at the place that had become their home. It was a shotgun house: rooms opening one onto the next. Farthest: the half-packed disarray of the kitchen, with dried rosemary on the floor and their plates wrapped in 1960s newspaper clippings. Next the old man’s room, with the clothes and books she had failed to bring to the Salvation Army, the lemony smell of his armchair. And finally their room: a mess of thrift store baby clothes, their neighbor’s stroller with its rusted handlebars.

Now that they were leaving, she realized how much she’d been fooling everyone. Of course, no one on the block knew yet; Emmanuel had even offered to help George pack the RV. She never told anyone where they were moving, or that her sister’s house in the suburbs of New York had three bathrooms and prepared salads in the refrigerator. She didn’t know why she had tried to convince George it was time to leave. Maybe she had grown tired of defending herself to her relatives, or maybe she was afraid of the schools established after the hurricane. The eviction notice had been almost welcome: they could say they were at the mercy of forces beyond their control.

She rose from the mattress with the baby and unhooked the wooden door to the porch. She took George’s hand, the one without the cigarette, and held it against her stomach.

“We could stay here and see what they do,” said George. “Tie ourselves to the porch.” He blew into the front yard and didn’t look at her. “We could roll the RV over to the parking lot on Claiborne Avenue.”

“And squat until they ticket us?” she said. She had reservations. This was their last morning, a time to think practically.

After the old man died she started taking evening walks across the city, one baby in the strap outside her stomach and the other inside. She walked passed the neighbors sagged in porch chairs and passed the oil trains to the side of town where the gaping houses reminded her of skulls floating in a graveyard. It was like walking on the ocean floor, her feet dragging in weeds, organs swollen. Around sundown she would reach Frenchman Street and sit on the curb across from the teenage brass band. On each of the other three corners the audience, mostly out-of-towners, smiled sheepishly and swayed their shoulders. A man with skin the color of mussels danced in the middle of the street, danced with the cabs, which crossed the intersection and avoided him.

On her walks she would wonder why the old man had died. At first she would have said he’d been murdered: by the contractors with their port-a-potties and generators and helicopters, the developers with their maps and rulers, the deeply sorry President and people like her mother, who asked, what were those people thinking? They heard the warning, who in their minds formed the images of floundering black bodies and screaming black pregnant girls and thought to themselves, such a shame. The old man had barricaded himself until someone took him to the Superdome. There, with thousands of others stewing in pools of urine and feces, he ate Oreos.

He lived for four more years. Ultimately she would have conceded that he had died not of murder or maltreatment but of old age. Or perhaps they had killed him indirectly, by placing him in a situation where he had done things he could not live with. Almost every night, he’d sit in his armchair as the pigeon cooed and the oil trains blared into the dark, retelling the Oreo story.

She heard one passing now, the shaking of metal chains. She kissed George’s neck, folded her hands across his waist, breathed into his shoulder the softness of her sleep. He shut his eyes and threw his cigarette into the front yard.

It was those evening walks that had convinced her. The neighbors, the dancers, the oil trains. Everything would go on without them.