the creative practices of tech’s next generation 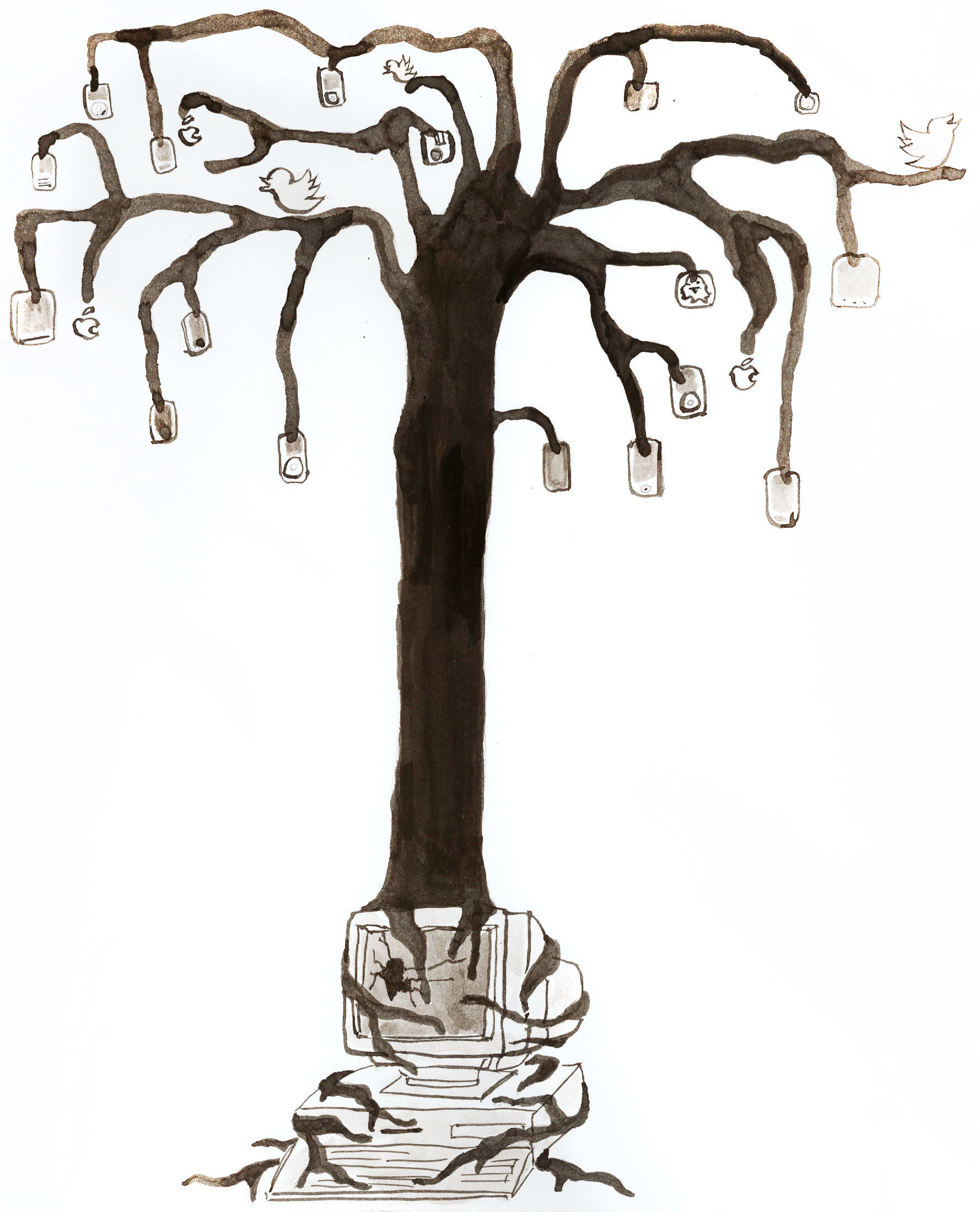 In his newest film, A Mind Forever Voyaging Through Strange Seas of Thought Alone, Mike Mills interviews the eight to twelve-year-old kids of Silicon Valley employees. Some of the children give endearing visions of extreme connectivity and robot friendships. Others identify some of the more troubling implications of technology for the world they will inhabit as adults: Amy, age 10, believes that because humans “won’t have access to as much nature” in the future, they will not be as smart as they are now. Kyle, age 11, thinks that the poor will “[be] out of it,” without access to “all the high tech stuff.” Courtney, age 11, has this to say about growing up: “When [people] get older, their creativity just flows away. You just see the little spark in them just sometimes goes away, gets washed out by a flood,” and later describes how adults become so focused on “getting money” that they forget family and what’s “actually really important in their lives.”

There’s something incredibly endearing in the way kids simplify the complex and compromised concerns of adults. Yet, at the same time, these kids seem incredibly perceptive about the issues—of environment and class especially—that follow from technology’s current orientation. This prescience seems at odds with their age and, even more so, with how most identify a piece of technology as the most valuable item in their lives. It would be easy to identify this prescience as a simplification of ideas handed down by typically liberal and educated parents. Yet to do so could be a mistake, for this prescience fundamentally opposes their parents’ concerns. It’s as if youth’s hold on creativity comes with a different set of values, as if adults’ emphasis on money over what’s “actually really important” is less an achievement than a loss of an initially intuitive critical awareness.

Youth’s creative simplification provides alternate ways of seeing the world and illuminating problems. This is nothing new: The idea of a youth movement seems as old as social change itself, and young creatives are often seen as leading the charge. But Courtney’s observations are especially interesting because they emerge from a culture so emphatically obsessed with change—from Silicon Valley. Despite this origin, Courtney’s idea of creativity becomes a means to maintain older, humanist values—family, the environment, helping the poor—rather than to invent new ones.

Most of the kids featured in A Mind Forever Voyaging describe themselves as creative. But when they speak of how technology will change the future, they don’t consider their own capacity to influence it. One of the kids, discussing technology’s detrimental effect on human connection with nature, says, “I don’t like that idea, but I guess sometimes you have to accept what the future’s going to be like.” When asked if she thinks computers could develop souls, the same girl who lamented the loss of creativity and family values in adults worries about computers establishing tyranny over humans. In order to combat this dystopian future, she professes a desire for a benevolent human dictator to individually respond to the needs of the people. By this logic, the path of technological development is inevitable, and humans can only react to, rather than alter, their futures. How have these kids—so elevated for their creativity and potential to change the world—come to feel so resigned to the future current technology has set out for us?

A possible answer lies in the way technology has come to frame creativity in terms of a “connectivity” that is bound to the products of its industry. In his book From Counterculture to Cyberculture: Stewart Brand, the Whole Earth Network, and the Rise of Digital Utopianism, Fred Turner traces the attitudes of web culture back to the sixties New Communalist movement to establish the constancy of the promise of utopian connectivity in the personal consumption of its products—whether it’s LSD or an iPhone. As Turner told the Independent, the idea of “connectivity” justifies the tech industry’s “very individually centered project[s]” under the guise of social improvement.

The elevation of youth—occurring both in the sixties counterculture and the current tech landscape—to the exclusively creative time of life dictates the orientation of this creativity. Start-ups with the most fundraising success respond to the needs and desires of the demographic of their young creators—largely white, well educated, young, and male. There seems to not be enough incentive to address social problems in broader social spheres, like health care or biotechnology. With an entire industry geared to their needs, Silicon Valley’s youth seem incapable of using its creative abilities to contribute to progress outside of the “individually centered projects” that technology has legitimated.

The generations of people who have grown up within information and consumer technology—from those depicted in Mills’ film to contemporary start-up CEOs—assume that engaging with technology is inherently a social good and that merely connecting to the network already contributes to progress. They have come to think, “that the moment of consumption is itself also always a moment of production,” according to Turner. When the older generation of Silicon Valley engineers derides the younger generation’s creative ventures as self-involved, they omit their implicit role in engendering such an attitude. The older generation of technology historically youth as the exclusively creative time in one’s life while tying it to a project of “connectivity.” The attachment of creativity to this project has resigned today’s youth to the impossibility of change outside of digital spheres.

The “connectivity” of technology promises that “everyone has an equal opportunity to be an entrepreneur.” The problem, Turner told the Independent, is that “in fact, that’s not quite the case.” The web, despite claims that it provides universal access to opportunities and information, has not been the great equalizer. On the contrary, this rhetoric of a leveling equality often obfuscates inequalities in the material world. Technology necessarily codes the world as systems of data that can be organized and manipulated. For Turner, this re-framing of the world as systems of information “makes it much harder to talk about the living bodies that are in the workplace and around it.” He identifies this re-framing as the reason that “at Google, the living bodies in the kitchen frequently don’t earn enough to pay for health insurance.”

The exclusive use of creativity with reference to “connectivity” has prevented even those with privileged access to technology from seeing themselves as agents of change. This helps to explain the resignation of the kids in A Mind Forever Voyaging. In viewing every technological interaction as a creative act, these children lack the ability to conceptualize creativity elsewhere. They thus either give a utopian view to the future of technology or forfeit it to mythical agents of change, figures like Mark Zuckerberg or Steve Jobs.

Instead of seeing change as coming from a tide of like-minded individuals, the individual tinkering in his or her garage then sharing his or her findings in a “connected” world has become the primary agent of change. Mills, in an interview with The Believer, mentioned a scene that didn’t make it into A Mind Forever Voyaging, where one of the kids talked extensively about “how Steve Jobs is basically the Second Coming and how he created the world we live in now.” The faith we have in these individuals as the only ones to create change becomes literal. But the varieties of change we envision remain limited.

The creative simplification performed by the kids in A Mind Forever Voyaging—the invocation of values such as equality, family, and the environment—turns out to in fact not be a simplification of more complicated adult ideas. In the tech sector, social change and liberal values are discussed at the same level at which they are approached by the kids in A Mind Forever Voyaging. The parents and the kids perceive social issues using the same shallow platitudes. Social change is paid lip service and aestheticized to complete the tech industry’s progressive image. With the possibilities of actual change paralyzed by the harnessing of youthful creativity “to an industrial project devoted to the making and the distributing of software and hardware,” as Fred Turner puts it, the rhetoric of change shows itself to be empty outside of digital spaces.

Yet, there remains the possibility of subversion in the way the kids set themselves apart from their elders. Self-awareness might be developing around the platitudes handed down to young people. In a piece for the New York Times Magazine, Yiren Lu, a graduate student who has worked at many large web firms, identifies “the vague sense of a frenzied bubble of app-making and an even vaguer dread that what we are making might not be that meaningful” among the young people working in tech today. This realization—that systems of information might not allow for unprejudiced connectivity and social improvement—hints at the possibility of a gap in generational understanding of the scope of innovation and change in technology. Perhaps the consequences of this conceptual gap will materialize.

The way the younger generation uses the older value systems—like those referenced by the kids in Mills’ documentary—may prove central to imagining the future of tech. The question becomes whether these value systems—of family, the environment, and equality—are treated as the platitudes of an older generation or as sites of self-awareness and critique for the next generation of youth. As sites of critique, these values could reveal problems in the world that technology currently glosses over. The possibility of actualizing change then depends on the creative use of what are handed down as simple concepts. Despite all of its trappings, youth seems uniquely suited to the task.

For more thoughts on the creative possibility of youth and how the tech industry relates to it, read the Indy’s full interview with Fred Turner.