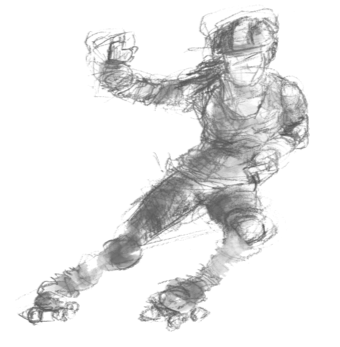 It’s a Monday night, and I’m at the Ocean Club, an indoor roller rink in Narragansett, Rhode Island. The sign outside the building reads: FUN P ART Y GAMES. The Y is upside down. Inside, under dim fluorescent lighting and a partially concealed disco ball, a Daytona 2: Battle on the Edge arcade game sits next to a snack bar.

Rhoda Perdition, a pink-haired roller derby vet of 10 years, is directing Danielle through the skills assessment section of her tryout for the Providence Roller Derby League (PRD). Danielle is nervous—she failed her first assessment, and, one month later, is back for a second try. She weaves slowly between cones, her skates grinding loudly on the track when she stops. She sucks in air through pursed lips, and her knee and elbow pads look straight off the shelf, not yet scuffed.

On the other half of the rink, Shotz of Petrone leads 13 women through a warm-up. Rhoda and Shotz, a broad-shouldered military police officer, are co-coaching tonight’s league-wide practice. Many of the women on the rink are members of the Rhode Island Riveters, Providence Roller Derby League’s most elite squad. The Riveters play nine months out of the year, and the women practice at least three times a week. 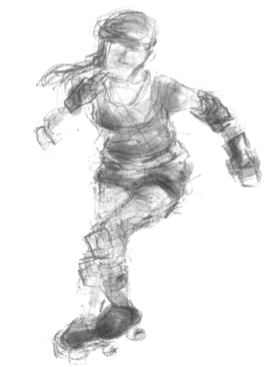 Roller Derby in its modern incarnation—think all-female teams, violent body checks, and intense team spirit—emerged in Austin, Texas in 2001. According to Rhoda, it was thought up by some “fly-by-night rocker guy” as a kind of circus “sideshow.” That guy, Daniel Eduardo Policarpo—a musician known almost exclusively as “Devil Dan”—later dropped Texas roller derby to work on a screenplay about a guitarist he calls “El Fuego.” But the women he recruited to fulfill his derby vision transformed his idea and ran with it. They formed a company called “Bad Girls Good Women Productions,” dubbed themselves "SheEOs," and launched a DIY all-women cult craze. Now, roller derby is the fastestgrowing women’s sport in the world, and male and co-ed leagues have also emerged. The Women’s Flat Track Derby Association is currently made up of 344 member leagues internationally, and Roller Derby was under consideration for a spot as an event in the 2020 Olympics. Even Hollywood is in on it—in 2009, Ellen Page starred in the derby-centric movie Whip It.

Gameplay is fairly simple. Two teams face off, each with four "blockers" and one "jammer" on the oval track at a time. Jammers are tasked with point scoring. In two-minute bouts, they fight their way through the pack of blockers, earning a point for every member of the opposing team they manage to pass. The team with the most points at the end of the two 30 minute periods—scores run into the hundreds—wins.

The Providence Roller Derby league was founded in 2004 by a Brown student named Sarah Kingan (a.k.a. Sarah Doom) as the first all-female flat track league in New England. “Back then,” says Rhoda, who is an original member, “it was just a bunch of dopes getting together and skating.” Doom has since moved on to Boston, where she founded another league—Rhoda calls her the “Johnny Appleseed” of Derby—but PRD has thrived in her absence.

Over the past 10 years, Rhoda has helped the league grow. PRD is currently made up of three home teams that compete locally and two travel teams that compete at the national level, one of which is the Riveters. The Mob Squad, the Sackonett River Roller Rats, and the Old Money Honeys are collectively made up of about 40 skaters, and compete in the regular league season, which stretches from February to November. In the national arena, the Riveters are solidly average, occupying 95th place out of 181 ranked teams. In a state as small as Rhode Island and a city as small as Providence—Rhoda keeps accidently calling it a “town”—it’s hard to get the kind of competition and to draw the talent needed to rise in the rankings.

This doesn’t mean PRD’s bouts are any less intense, or the women any less driven. In November, the Roller Rats matched up against the Old Money Honeys in the league’s championship match. The match, housed in downtown Providence’s cavernous Convention Center, brought in a raucous and surprisingly family-oriented crowd. Though I sat on the floor behind a young punk with blue hair and a fresh tattoo, I also saw a young boy holding a cardboard sign lettered OMH (Old Money Honeys) over his head, and an elderly woman asked me to move so I wouldn’t block her view. For the most part, the skaters appreciate that roller derby is not as fringe—or as campy—as it once was.

The women make a point of emphasizing the sport aspect, as opposed to the camp aspect, of roller derby. Roller derby “has its roots in camp,” Rhoda says, but “in a way the campy aspects of it, like the personas and the outfits…are less prevalent [now]. It’s embarrassing to lose to a team in tutus.” Athleticism trumps affect. The skaters, it seems, are slightly peeved by the stigma still attached to roller derby—it has nothing to do, they argue, with staged sports like pro-wrestling. “Some guys,” Rhoda says, referring to the men in her martial arts class, “are like, ‘I would rather become a figure skater and wear a sparkly outfit than join roller derby.’ But I think if they put on a pair of skates, we’d make them hurt.”

Roller Derby’s theatrical reputation dates back to its heyday as a made-for-television production in the ’60s and ’70s. It’s evident, though, that today’s roller derby is athletic and unstaged. During Monday’s practice, the women link arms and sling each other forward. They practice blocks, jamming their shoulders again and again into one another’s chests. They sprint around the track and they fall hard. Boones Harm, a soft-spoken skater with metallic gold duct-tape on her elbow pads, points to a constellation of faded bruises on the inside of her arm. “It’s a real sport,” Boones and Shotz both tell me, sharply. 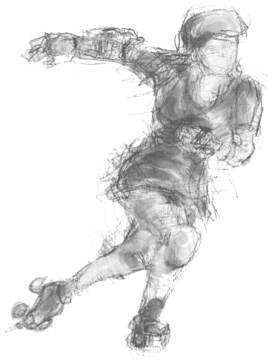 I talked to Boones before practice, as she laced up her skates near the Ocean Club’s snack bar. “[Roller derby] makes me feel better about myself,” she told me. When I asked her if she’s had one particularly memorable moment of glory on the rink, Boones shook her head. “It’s all been pretty glorious.” “Who you are on the track and who you are off the track definitely meld, after a while,” Rhoda says.

Later, driving back to Providence after the practice, Rhoda and her partner Delta, also a member of PRD, tell me they mean this in more ways than one. “A lot of people,” Rhoda says, “have never been in a situation where they have a super physical relationship with other females…So some people start feeling things they’ve never felt before, and are like, ‘does this mean I’m gay?’ And in some cases, yes…and in some cases, ehhhh, you’re just a little derby gay.” Delta laughs appreciatively.

Maybe it’s because roller derby is intentionally and self-consciously an all-female sport, or maybe it’s because of its feminist ties—derby is a by-women-for-women institution that addresses themes of third wave feminism, including trans rights and sex positivity—but roller derby women, more so than most other female athletes, are often stereotyped as gay. Last year, for instance, the Huffington Post ran an article titled “Does Roller Derby Make You Gay?” And when Advocate.com ranked the "Gayest Cities in America," they used the number of roller derby leagues per city as part of their equation.

This typecasting does not seem to bother Rhoda and Delta—in fact, they give me an elaborate rundown of the difficulties of intra-team dating. Boones and Shotz weren’t too agitated either; earlier, both mentioned that though it’s true people are often drawn to derby for its stereotypes—gay women in campy outfits hurtling violently around a track—their skewed perceptions quickly dissolve after watching a bout. Shrugging off the stereotype seems to be the norm among derby women; roller derby is a sport that celebrates spunk, guts, strength—sexual orientation is largely irrelevant to the goals of the team.

At the end of practice, when Rhoda tells Danielle that she has passed the assessment, the women whoop and clap, even though Danielle, flustered by her success, has already left the track. She is one of them now, part of their fierce and tight-knit pack. Once she’s drafted onto a home team, she’ll be christened with a derby name. It’s not yet known what she’ll bring to the league, but for Rhoda and the others it’s clear what the league will give to her. “In everyday life women are supposed to be agreeable and accommodating and always open,” she’d explained to me earlier, “so if you’re assertive, you’re a bitch. And you know, for a lot of women, roller derby is something that they’ve never felt before in their life. A stage where you have permission to not be nice.”