You Swan, Go On

Sun Kil Moon and the artist as death-prophet 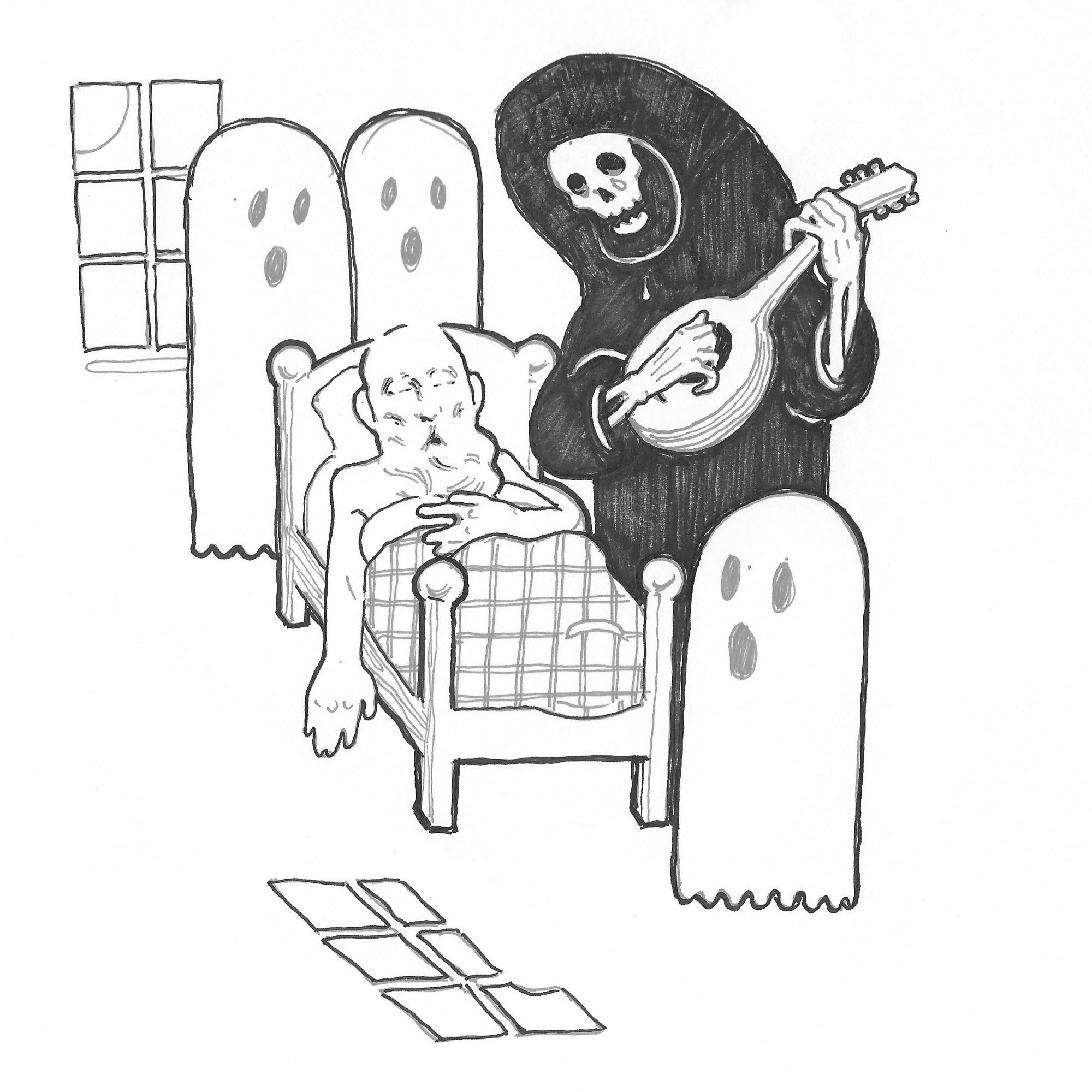 Bob Dylan’s “Highlands” plays over the stereo. About ten minutes into the song, I become distracted and check my computer quickly. When I refocus on the music, I’ve lost Dylan. Over the steady pulse of an organ, Dylan explores the tensions of his past with his present existence, but I’m no longer there. He has gone ahead without me. I start to consider my personal distance from Bob Dylan and wonder how he feels at this present moment: How he feels about me, in this room, right now, or even how he feels, post-dinner, sitting in his own living room. I realize I don’t even know where Bob Dylan lives or why I feel that’s important for me to recall.

More so than any other figure, the folk artist plays up to the world’s conception of the artist as a prophet, amplifying and foretelling future anxieties for the rest of us. I use folk here loosely, to mean any songwriter who—often with mythical undercurrents—seems to understand and then to lead the feelings and perceptions of people, both in the collective and individual senses. There exists a classic lineage of these artists, those who have taken on entire social movements or the scope of individual lives in their art. This lineage contains the canonical names all folk songwriting must contend with: Presley, Dylan, Cohen, Waits, Lennon, Springsteen, Cash. These artists cultivate a unique connection to the (usually) American people and their everyday tragedies, elevated for their ability to elucidate the fears, anxieties, and sadnesses of farmers, young people, sailors, factory workers, bankers, and political figures.

What’s most remarkable about these artists is their ability to connect at such a personal level while maintaining the level of universalism that lets them be prophets for a wider audience. We feel the best songs, very deeply and unshakably, not as an audience but as individual listeners. This fact lends itself to the faith we have in these artists, why we let them have such sway over the way we come to see the world.

The modern inheritors of this songwriting lineage have stretched this power in a multitude of directions, including a subversion of the basic tenets of the folk hero’s relationship to his or her audience. The generation of more personally oriented and confessional songwriters that emerged during the 1990s, Mark Kozelek of Sun Kil Moon exemplary among them, has brought us, as music listeners, uncomfortably close to what the elevation of the artist as a prophet means for our own sense of self.

Kozelek established himself as a member of this lineage during the 1990s as the chief creative force behind the Red House Painters, writing glacially shifting slow songs about melancholy and nostalgia. Following the Painters’ dissolution, he continued to record under his own name and as Sun Kil Moon, mining more and more personal territory. Kozelek’s most recent album as Sun Kil Moon, Benji, released in February, continues this progression. The songs play as the live narration of Kozelek’s thoughts. This songwriting style brings us more closely into contact with the idea that the artist thinks as we do, stripping away the mythic element of the folk hero.

Kozelek’s last album as Sun Kil Moon, 2012’s Among the Leaves, reveled in the listener’s desire for knowledge of the artist’s life, detailing his affairs, jealousies, and complaints about his fans—“guys in tennis shoes”—as he toured the world. Benji applies the same hyper-confessional approach to Kozelek’s meditations on death through his family, friends, and experience of national tragedies. Where many found Among the Leaves unrelatable and overwrought for its heightened honesty, Benji has been met with nearly universal critical praise. This dissonance points to the existence of accepted forms of openness, where an artist’s attempts to identify with his or her audience are only recognized as valuable within certain subject matters. As listeners, we want to preserve the idea of the artist as having something greater to say than we might, as coming down to our level only for special occasions.

The critically lauded form of honesty Kozelek plumbs on Benji corresponds with the late-career, death-fearing albums of the folk songwriting lineage. This trope, established in the 1990s by Bob Dylan’s Time Out of Mind, Tom Waits’s Bone Machine, and Johnny Cash’s American Recordings, invokes the image of the wise elder settling down and looking back as a way to provide guidance for the future. These albums become a way for the artist to use their established careers to pull their lyrical concerns—and their listeners—forward. We hold on to the familiar cadence of a Dylan song as we rely on him to bring us to some understanding of our futures, of our death.

“Well, my heart's in the highlands at the break of day / Over the hills and far away / There's a way to get there and I'll figure it out somehow” –Bob Dylan, “Highlands”

There seems to be something about death that demands simplicity. We spend practically our whole lives reckoning with what death means to us, but when we think of death itself, it is just that—a simple, cold end. Death feels elemental and true in way that even birth doesn’t, paradoxically because it confronts us as a prospect of simplicity rather than as an assured reality. A simple test: when was the last time you thought of your birth?

At the same time, though, thinking of death as simple involves an active ignorance of its implications, of thinking of the millions of echoes it holds within our lives. We recognize this complexity but seek not to pursue it, favoring a simple understanding of death that may reference complexity but doesn’t engage with it. Death becomes separate from its personally felt pain and consequences, an abstraction we can thus ignore on a day-to-day basis.

Death-obsessed albums evoke the desired simplicity of death in their musical style, often singled out as a “return to form” for the artist. The foregrounding of blues-rock menace on Waits’s Bone Machine, a return to stripped-down production and covers for Cash’s American Recordings, and echoes of surreal balladry in “Highlands” not only recall the artists’ earlier work, but also solidify their careers in a narrative arc. For this generation of singer-songwriters, the death-oriented album became a way to unify and define their personal “sound” as they carried their lyrical concerns forward.

This kind of narrative arc offers a kind of closure and understanding through active engagement with the artist’s back catalogue. The familiarity this arc engenders composes the simplicity the audience desires when dealing with death. Lyrically, then, the audience gives the artist a lot of leeway to explore the consequences and complexity of death. Unwilling to handle the complexity of our own ends, we look to the artist to spell it out for us.

Throughout “Highlands,” the pulsing bedrock of organs and tumbling blues guitars drive Dylan’s reflective observations. Dylan has long used this churning musical momentum to bolster the coherence his abstract lyrics occasionally move away from. “Highlands,” however, seems grounded in a narrative: Dylan disappoints a waitress with his drawings and relevance to the modern world. The slow churn of the music comprises the “return” for Dylan, a way to recall the abstraction of his older material. His conversation with the waitress details a disconnect, where Dylan’s drawings and answers don’t correspond to the waitress’s life or “at least that’s what I think I hear her say.” “My heart’s in the highlands / I can’t see any other way to go,” Dylan confesses. His abstraction becomes a way to cope with the world around him as it changes and indicates that he will be left behind. He still needs lived experience, a connection to the younger world around him to become meaningful. Dylan thus continues to stretch his lyrical concerns toward a vague “highlands” while identifying where he has come from (and must return to).

While Dylan, Waits, and Cash all continued to make music after these albums, at this point in their careers, they conceived of their careers’ end in terms that referenced their entire lives’ work. Here perhaps lies the answer to why these albums feel especially prophetic. They do what we can’t: lay out the appropriate complicated terms for their end and continue beyond them.

“Carissa was 35 / You don't just raise two kids, and take out your trash and die” –Sun Kil Moon, “Carissa”

What reading death-obsessed art as the elevation of artist-as-prophet ignores is that these artists really might just be bone-chillingly afraid of dying. Mark Kozelek foregrounds this fear on Benji, becoming extremely relatable in his failure to comprehend death as such a simple process. Listening to the record, I’d occasionally cringe at just how awkward Kozelek sounds singing lines such as “So when Christmas comes and you're out running around / Take a moment to pause and think of the kids who died in Newtown.”

The specificity of detail—all of it filtered through Kozelek’s own life—adds to this feeling of discomfort across Benji. Even in the autobiographical songs, about his cousin “Carissa” or his neighbor “Micheline,” it seems gaudy or inappropriate to lay these people’s lives so bare. Kozelek recognizes this, as on “Carissa,” where he sings “I didn’t know her well at all / But it don’t mean that I wasn’t / Meant to find some poetry to make some sense of this, to find a deeper meaning / In this senseless tragedy.” Kozelek’s lyrical style just happens to be so bare and factual that we don’t see this poetry except implicitly, understanding that he finds poetic significance in the events and thus finds them worthy of presentation. This lyrical technique forces us to confront the meaning and complicated truth of these events—of death—alongside Kozelek. We lose the artist as our guide. Kozelek’s honesty makes us uncomfortable because it refutes the idea of an artist-prophet, making him just as fallible and generalizing as the rest of us and leaving us to confront death independently.

I’m haunted by the idea that there is something to lose. That some day, Waits, Dylan, or Kozelek could wake up and no longer believe in what they do. That I could go on believing in the power of it while they don’t. They must know more than I do.

Death-oriented art plays off of this tension, promising the power of a career spanning arc while also revealing the artist’s own confusion. We look to such art to guide our perceptions of death, a search it satisfies while telling us it too is unsure. No bridge is crossed; we don’t give ourselves the conviction to pursue these matters, and we don’t think of the artist as quite like us. Instead, these albums remind us of these tensions, which sometimes feel like as much as we can handle.

I turn the stereo off, pour myself another cup of tea and turn on my computer. My headphones feel comfortable around my ears. I think about Mark Kozelek, sitting in his studio, absently plucking his guitar and reflecting on how he ended up here. He recognizes me on the other side. He has already hit record.