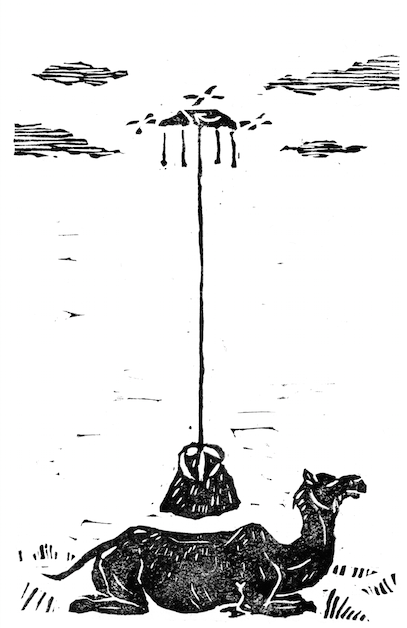 At the beginning of the world, Camel did not want to work. Every time Horse or Dog or Ox would ask for help, Camel would moan, “Humph.” The djinn of the desert warned Camel: “I shouldn’t say that again if I were you.” But Camel humphed again. And so the genie puffed Camel’s back into a hump, letting him survive without eating for three days in order to catch up on the work he refused. That is “How the Camel Got His Hump,” explained in Rudyard Kipling’s 1902 collection of Just So Stories. In each pourquoi story, Kipling tells why something is and how it came to be: “How the Alphabet was Made,” “How the Leopard Got His Spots,” “The Beginning of the Armadilloes.”

Kipling passes down tales in which the mythological explains the everyday. Through repetition, pourquoi stories turn from speculative fiction to accepted fact. The answers provided by folklore supersede all others. The myth, once inscribed, cannot be forgotten or altered. The stories claim that the world could once support magic but can no longer. Leopard never again will change his spots—he is “quite contented” with the way things are.

By providing a mythical origin, pourqoui stories provide no origin at all. They preclude other answers. The stories are good enough. They pacify curiosity—things are just so.

In Imaginary Futures, historian Richard Barbrook argues that old technological projections of the future structure the way we view the technological present. Each prophecy suggests its completion. “The present is understood as the future in embryo,” Barbrook writes, “and the future illuminates the potential of the present.”

The future promised, promises, continues to promise. It sells itself ad nauseam: artificial intelligence, the information society, techno-utopia. We still envision the flying car as it whizzes the Jetson family through space. Barbrook offers an aphorism: “the future is what it used to be.”

In Silicon Valley, origin mythology precedes everything. Stories cement themselves: Apple started with Steve Jobs and Steve Wozniak tinkering in a garage; Mark Zuckerberg coded Facebook in his Harvard dorm room. We know them from magazine covers, television news reports, and the feature films that recite their stories.

Jobs, a 2013 biopic, opens in an Cupertino auditorium. Steve Jobs (played by an age-enhanced Ashton Kutcher) walks into the hall as strings lift. The audience stands in ovation. “I’m about to show you something that’s amazing,” says Jobs as the room quiets down. “Something that no one else in the world has seen yet.” He places his hands together, then separates them outwards in gesticulation. He makes a joke, then pauses for the laugh. “The device I’m about to introduce to you is gonna revolutionize an entire industry. It’s a music playing device,” he continues. His audience gasps in disbelief, and he reassures them. As he speaks, he places his index finger and thumb together, shaking his arm at the elbow on every word. “It’s a thousand songs, in your pocket.” Jobs pulls an iPod out of his light-blue Levis. Without time to digest or process, the audience leaps to their feet. The gap between introduction and ecstasy shrinks to zero. Mythology propels itself from such reiteration; in retelling, fiction and reality lose their borders.

Origin mythology promises a glimpse at the imaginary future, a peek into the world in which a given new thing will exist. “The importance of a new technology lies not in what it can do in the here and now,” writes Barbrook, “but in what more advanced models might be able to do one day.” It matters not whether the product is hardware, software, or vaporware—a new thing that doesn’t exist right now and might not ever.

On stage, a story spins about why this new thing is new, why it is necessary, why it is radically different from all before it. Oftentimes, only press members, prophets of origin myth, are in the room. Only through the press does origin reach the populace. The thing appears, as if from thin air, to satisfy a need created minutes earlier. Through the origin myth, the new thing tells us that it fills a void we never knew we had. It arrives already essential. You never asked why the leopard got its spots. The answer precedes the question: it is just so.

On the eve of Cyber Monday, Amazon CEO Jeff Bezos sat with Charlie Rose for an interview and product demonstration on 60 Minutes. “There has never been a company quite like Amazon,” Rose begins. “Amazon has reinvented itself time and again, changing the way the world shops, reads, and computes.” In the interview, Bezos speaks with eyes wide, pausing before each clause to make sure he imbues it with the necessary enthusiasm. “When I was delivering the packages myself,” Bezos laughs, “one of my visualizations of success is that we might one day be big enough to afford a forklift.” He staggers forward in his chair. You are now in on the joke.

Bezos lets Rose and the 60 Minutes crew into the company’s headquarters in Seattle to unveil a new production. Before the reveal, Bezos and Rose talk about Amazon’s holy grail for the consumer: same-day delivery. Bezos then introduces Amazon Prime Air, drones that deliver products weighing less than five pounds within the half hour. In under a minute, Amazon has created and fulfilled a consumer desire. “I know this looks like science fiction,” says Bezos, “It’s not.”

Amazon’s webpage for the project promises, “One day, Prime Air vehicles will be as normal as seeing mail trucks on the road today.” For now, Prime Air is vaporware, and even Bezos admits it’s “still years away.” But by showing off Prime Air years before its commercial viability, Amazon has cemented its relevance far into the imagined future. Bezos guarantees: “It will work, and it will happen, and it’s going to be a lot of fun.” If Prime Air ever becomes a reality, we will know the moment in which it began.

Mythology obscures motivation. In the 60 Minutes segment, Amazon Vice President Dave Clark projects, “Anything you want on earth, you’re gonna get it from us.” Following the shots of Amazon warehouses sorting packages with jawdropping efficiency and the intro narrative presenting Amazon as revolution, monopoly seems like a natural end. “If you can do this with all these products,” Rose explodes, “you guys are going to organize the world!”

Even the CIA stores its data in Amazon’s cloud.

Origin mythology redirects attention from corporate interests to consumer benefits. In Dave Eggers’ recent novel The Circle, the titular company uses its mythology to indoctrinate. In the not-quite-real Bay Area satellite of San Vincenzo, Mae Holland joins the Circle—a tech company that has overgrown all other tech companies—with wide eyes and unending enthusiasm. Even as the company descends into the obviously sinister, Mae takes up each new thing and its corresponding origin myth with ease. Of course, everything at the Circle is just so.

In the opening pages, Mae tours the Circle’s campus while her friend Annie launches into origin mythology for the Circle’s executives and products. “I know this,” Mae protests, the Circle’s stories woven deep in her cultural fabric. “Don't stop me now,” Annie continues, “I’m giving you the same spiel I have to give to heads of state.”

The Circle, legend has it, crushed competition by condensing all personal information on the web into one place. Its main feature is TruYou—“One button for the rest of your life online”—a profile that unifies everything: passwords, payments, identity. By tying all purchases to people’s real names, crime and fraud precipitously drop: “TruYou changed the internet, in toto, within a year.” In its myth, TruYou sounds revolutionary.

As the novel progresses, the Circle expands its panoptic extremes. Everybody can be seen and monitored by SeeChange cameras; each child can be geo-located by ChildTrack sensors embedded in the skin; politicians elect to “go transparent,” wearing broadcast cameras around their necks 24/7. The message and its accompanying imagery are not subtle. (At one point, a translucent shark devours other sea creatures in a controlled captivity tank.)

One night, a SeeChange camera catches Mae stealing a kayak and paddling through the San Francisco bay. Called into CEO Eamon Bailey’s office to discuss the transgression, she finds herself at the center of the Circle’s unfolding mythology. If she knew people were watching, Mae admits, she would’ve acted differently. A few days later, Bailey brings Mae on stage in front of the entire Circle for a demonstration.

In their public conversation, peppered with witty banter and obvious calls-to-joke, Bailey and Mae reveal new mantras for Circle. “SECRETS ARE LIES” flashes on screen as Mae explains that, when uninformed, we invent dreadful explanations for ourselves. “SHARING IS CARING” pops up as Mae explains how shameful and selfish she was for not sharing her kayak trip with others. “PRIVACY IS THEFT,” the heftiest phrase of all, emerges as Bailey explains, “It’s the natural state of information to be free.” At the end of the conversation, Bailey announces that Mae will be going transparent, streaming all of her future experiences to the Circle.

Transparent Mae becomes a walking product demonstration for the company. She broadcasts every hour of her day, touring viewers through the sparkling campus. Mae never questions herself or the environment surrounding her, and to the reader this uncritical acceptance comes off as oblivious, frustrating, even unbelievable. The novel’s opening line—“My god, Mae thought. It’s heaven.”—suggests its end. Mae doesn’t transform. She buys in.

As origin mythology passes down and through product demonstrations in Bay Area convention centers, it continues to naturalize. The type of on-stage speech delivered by CEOs like Steve Jobs and Jeff Bezos becomes its own oral tradition. Repackaged and resold, origin mythology turns the new anew. If you want to sell a product or an idea, amass an audience and begin to weave. Beginnings always obscure their ends; mythologies always occlude their motivations. New things are never just so.

TRISTAN RODMAN B’15 claws at the fabric. 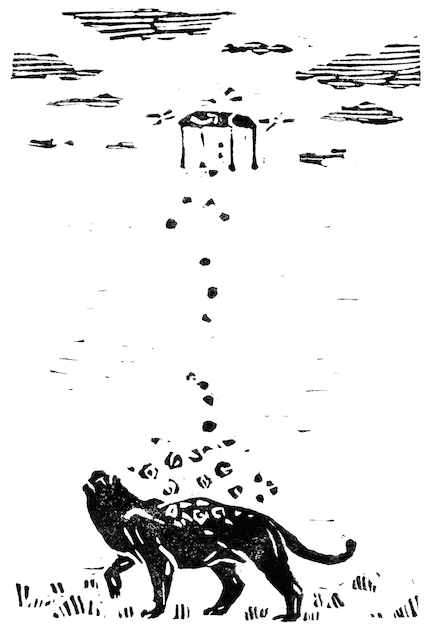