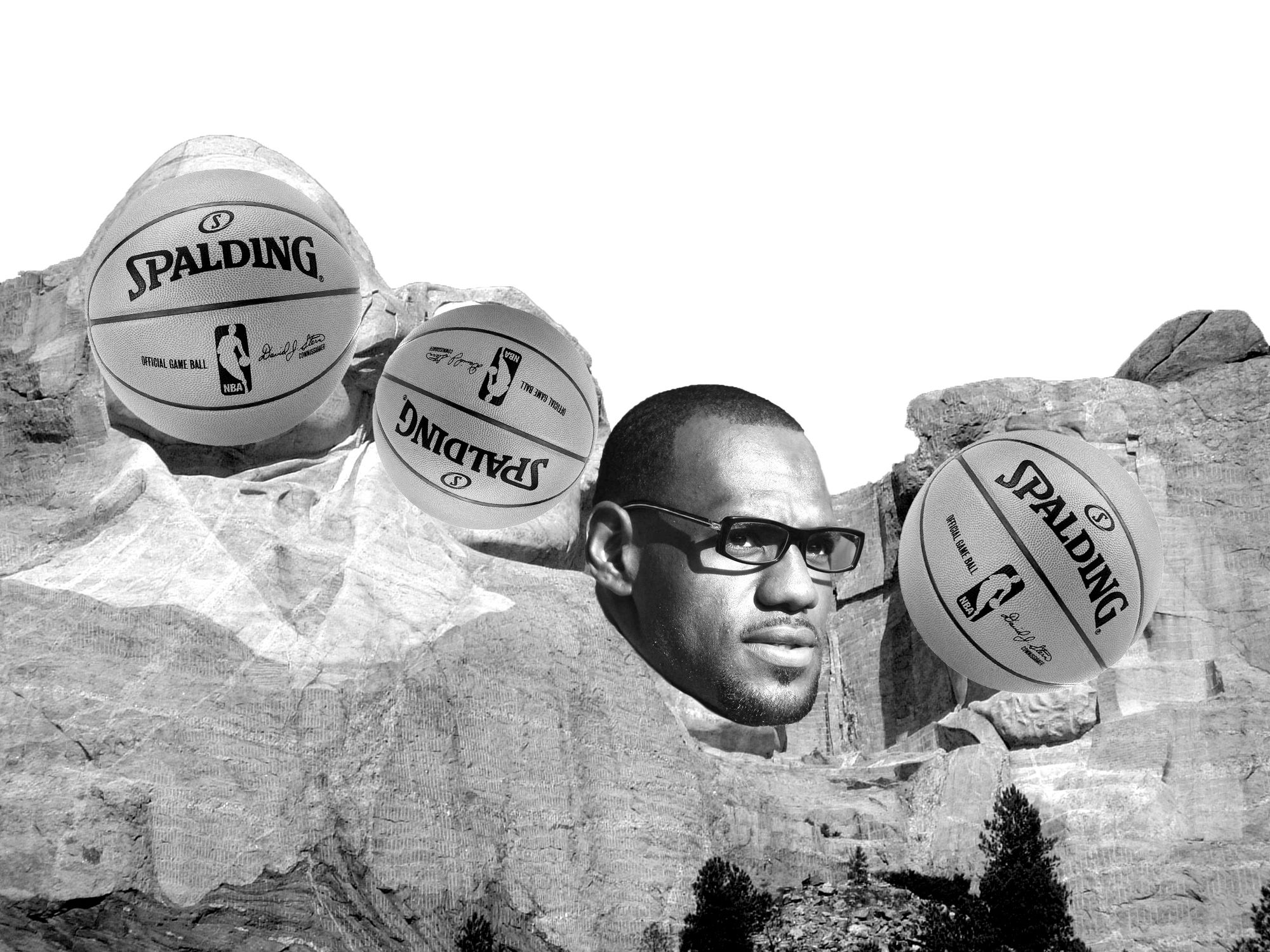 It looked like a casual conversation between friends as Steven Smith interviewed LeBron James in James’s Miami home. “Who’s your Mount Rushmore of the NBA?” Smith asked. “Larry Bird, Magic Johnson, Michael Jordan, and Oscar Robinson,” LeBron replied. “When it’s all said and done, are you up there?” Smith followed up. “I'm going to be one of the top four that's ever played this game, for sure,” James said without hesitation. “Somebody's gotta get bumped.” The sports blogosphere, always in need of fodder, latched onto James’s quartet. Who had he left off? Was he arrogant to say he’d replace someone? But nobody seemed to ask why this type of ordering was legitimate in the first place.

Smith’s question assumed "Mount Rushmore" was a value judgment, that it said something about who was excluded as much as about who was included. The framing was a misappropriation of the national monument, as Mount Rushmore wasn’t meant to be a best presidents list—the monument was a celebration of four great presidents, not an official declaration of the greatest four. For non-sports fans, asking for a top four might seem like a ludicrous question. It elicits an answer that makes an argument, but there isn’t an argument to be made. It’s a matter of preference, not fact.

For a sports fan, though, Smith’s question is commonplace. Sports offer the façade of objective value judgments because of a wealth of statistics from which to draw. Who’s the greatest hitter ever? The best shooter? The most clutch quarterback? The questions aren’t framed as preferences, but certainties, the answers aren’t feelings, but truths: batting average, shooting percentage, touchdown passes. They appear to indicate value in ways intuition or feeling can’t, so bestowing superlatives seems justified.

The “best ever” conversation has changed in the past couple decades with the emergence of new, more comprehensive statistical analysis. Bill James, the father of Sabermetrics, named for the Society for American Baseball Research (SABR), was one of the first to employ this kind of analysis in sports. Traditional statistics like on-base percentage, slugging percentage, and earned run average were supplemented by the likes of PERA, DRS, and EQA.

Sabermetrics uses already calculated statistics, combining them in formulas that try to measure qualities that traditional statistics could not. For example, BABIP (batting average on balls in play) is calculated by taking the difference of hits minus homeruns, dividing it by the difference of the sum of at-bats and sacrifice flies, then subtracting the sum of strikeouts and homeruns. It captures a pitcher’s average on batted balls that go for a single, double, or triple. The logic follows that strikeouts and homeruns occur solely because of the pitcher, so a shift in either category suggests a shift in the pitcher’s talent. Conversely, a shift in BABIP is mostly due to luck (a ball taking a bad bounce) or defense (a player making a tremendous play). A sudden spike or fall in BABIP for a pitcher indicates an abnormal coincidence of luck and/or defense, suggesting the pitcher’s performance will regress to the mean. This measurement is just one of many in Sabermetrics. Taken together, they should allow for empirical analysis of the whole game. As Bill James wrote, Sabermetrics is “the search for objective knowledge about baseball.”

Now, advanced statistics have crept into popular discourse, transforming how the casual fan watches and thinks about sports. Kirk Goldsberry, a geography professor at Harvard specializing in special and visual analytics, publishes popular NBA shot charts on Grantland, a widely read website published by ESPN. Even Bleacher Report has adopted advanced statistics into its regular coverage of the three major sports—the NFL, NBA, and MLB.

Statistics are themselves objective measures, but the conclusions drawn from them are not. Baseball is unique in that it is a series of discrete plays that, while related, can be broken down to individual results. Basketball and football don’t work this way. The games are too fluid, players too dependent on other players, to be meaningfully reduced to numbers. Even in baseball, though, statistics are limited. Work ethic, sportsmanship, being a good teammate. These aren’t empty phrases. They affect the locker room, which affects the field, and they can’t be measured empirically.

Some people understand this limitation. Sports journalist Bill Barnwell argues that “analytics should coexist with traditional measurements and concepts, and in many cases, that works perfectly... [but] there are some situations where analytics are totally useless.” He describes a natural symbiosis between old school and new school, between intuition and data. “It’s not about reducing sports to numbers; it’s about finding evidence...It’s all part of the puzzle.” But proponents like Barnwell overlook the macro shift in how we’re putting the puzzle together. This season, Major League Baseball introduced a camera system that calculates the efficiency of fielders. The NBA has installed SportVU cameras, which track the movements of players and converts the findings into statistical data prime for analysis, in every arena. Perhaps the old school will always be part of the discourse, but its voice is becoming smaller.

There’s no doubt statistics offer valuable insight, but the assumption that objectivity is possible has radically reconditioned the way people approach sports. Websites covering basketball, football, and baseball have calculated advanced statistics dating back a half-century to allow for cross-generational comparisons required to objectively determine the “best ever.” Given that Mount Rushmore is literally set in stone, the image seems to further the rhetoric of objectivity.

After James’s interview aired, NBA great Bill Russell, who had been left of the list, responded to the snub. “Hey, thank you [LeBron] for leaving me off your Mount Rushmore,” he said to TNT commentator Craig Sager. “I'm glad you did. Basketball is a team game. It's not for individual honors...I won an NBA championship my first year in the league, an NBA championship my last year, and nine in between. And that, Mr. James, is etched in stone.” Media outlets in Dallas, not quite done with the story, asked James to comment on Russell’s remarks before a game against the Mavericks: “He has his own opinions. He's his own man and I'm my own man, too.”

James isn’t known for being conciliatory. He has a lion wearing a crown—symbolizing his nickname, “King James”— tattooed on his shoulder and “CHOSEN” across his back. If there was an argument to be made, there’s no doubt he would have made it. When pushed to defend his top four, though, he conceded. James acknowledged his list wasn’t a declaration of fact, but of personal opinion.

James’s conciliation suggests Smith’s apparent misappropriation of Mount Rushmore wasn’t a misappropriation at all. Doane Robinson, the South Dakota historian who proposed the monument, initially wanted to feature western heroes like Lewis and Clark. Gutzon Borglum, the sculptor, decided that to accomplish Robinson’s goal of increasing tourism to the area, the monument should immortalize presidents instead. Borglum didn’t go to Congress to get a list of who was to be included; instead, he started with the three—Washington, Lincoln, and Jefferson—he felt were most important in American history and chose his close friend and political hero Teddy Roosevelt as the fourth. Rushmore was just one man's opinion.