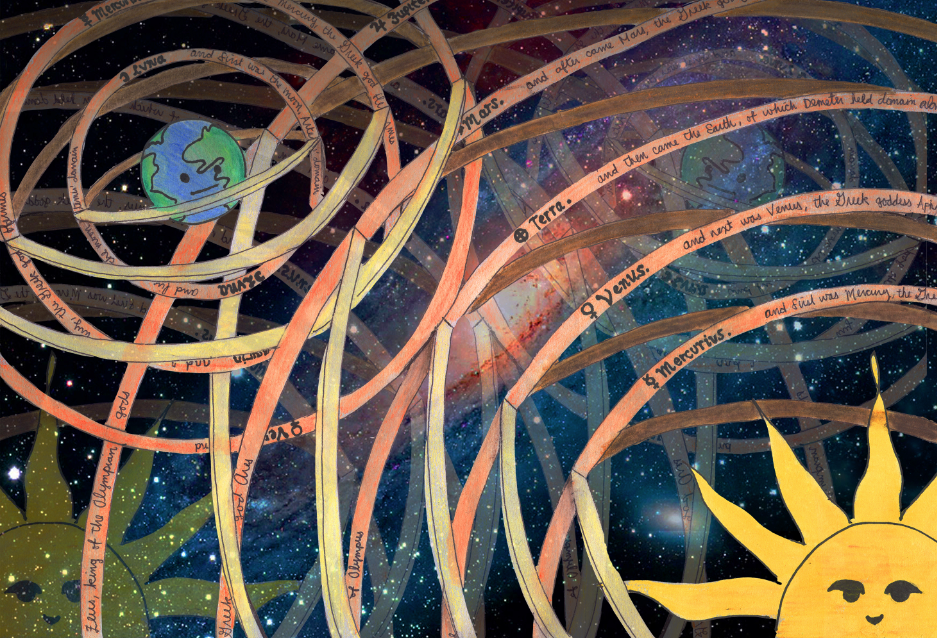 The Italian renaissance got its name for a reason. Immense technological leaps and the consolidation of wealth and power resurrected archaic knowledge and vivified contemporary pursuits. It was a rebirth in the fundamental sense of the word. The study of what was once considered to be fate written in the firmament became an arena of speculation as to how we could ever be the center of our cosmos.

Spurred by recent advances in telescopy and developing empirical frameworks, thinkers like Copernicus and Galileo struggled to articulate the idea of a decentered cosmos. Their views clashed directly with the institutions that made their discoveries possible. The knowledge produced by churches and universities came to question the doctrines of divine logic and geocentrism that those institutions held most dear.

At the same time, the patronage of magnates such as Lorenzo di Medici encouraged the recovery and translation of ancient philosophy. What we understand today as “the occult” was made possible by Medici’s push to transcribe and preserve the philosophy of Hermes Trismegistus, the apparent orginator of Hermetic philosophy, who preached unity, connectivity, and correspondence between the spheres of creation. The emphasis on the mind and the imagination, on the inner world of esoteric thought, offered new life to a cosmology which was quickly losing its bearings.

Giordano Bruno, the Renaissance polymath, viewed the findings of Galileo and contemporary philosophical speculation through a similarly mystical lens. His work treated fidelity to one’s self as requisite to the search for truth. He not only anticipated the consequences of heliocentrism for cosmology—daring to speculate that the Sun is one of many stars, each orbited by many worlds, some of them like ours—he also paid the price for speaking centuries out of turn. Giordano Bruno was burned at the stake by the Inquisition. His work predicted many of the guiding assumptions of the sciences today.

Under the shadow of the Inquisition, some scholars chose the luxuries of dogmatic and scholastic authority over the risk of life and limb. But those who sought the connectedness in things followed their pursuit to the end, regardless of the divisions thrust upon them. In a profound sense, every visionary thinker has always been a sort of mystic, struggling with the experience of what he or she knew to be real, emerging from a tradition that never had a name for it.

Rationality itself is only a partial view. But what do we do with the whole picture?

I’ve neglected to explore what might be missing. I’ve hoped to avoid everything from funny looks, to academic fatwas against irrational silliness, to the gleeful sadism of institutional psychiatry, which so delights in putting the world into neat boxes because you’re dilly-dallying in the packaging process.

The resources available to scholars today—in both institutional funding for research and in the digitization of the humanities and sciences—are approaching a critical point. To look within, seeking honestly to dispel the illusion of separation and stasis, is to see a path, a part to play, already laid out. And the visionaries of the past risked far more than ridicule for a mere fraction of the knowledge now available.

We need to troubleshoot our dialogue with nature, not nature itself. The way in which we learn is the very image of the world we’re trying to discover: an evolving, organic, self-aware world of reciprocal connections, not a set, mechanical world of replaceable parts.

MIT’s Mat Tegmark is laying groundwork to interpret consciousness as a fifth state of matter. Princeton Engineering Anomalies Research, or PEAR, has been refining decades of research unequivocally showing the effect of human intent on quantum noise-based random number generators.

Research today radically suggests that the mind is not in the head. Preliminary studies point favorably toward quantum information storage by microtubules in the brain, a theory laid out by Sir Roger Penrose in the ‘80s. This suggests that the holographic model of the universe, conceived around the same time, should be seriously reconsidered today.  Holography is a kind of analog recording that allows a 2D plate to show a 3D image. Even shards of the plate will reproduce the whole image, but the larger the piece, the sharper the image produced by the laser shining through it. Holographic cosmology and the holographic theory of the brain assume that everything that exists contains its own interior map of the universe. Larger, more complex objects (larger pieces of the holographic plate) have clearer maps, human brains being the absolute extreme of complexity, and therefore awareness. Brains are information processing organs, but the nature of the information itself remains largely mysterious.

The physical is no longer the center of our universe, simply one conduit for awareness. And we can’t entertain any other positions if we are to seriously pursue research into occult phenomena.

There are decades of documented accounts and rigorous study on the subjects. Over 20 Nobel laureates have conducted paranormal research, and many other scientists are formally demanding a reopening of these fields, their readmission to academic dignity. Etzel Cardena of Lund University authored an injunction to this end less than one month ago. Nearly 100 physicists, neurologists, and psychologists signed.

Evolutionary biologist Rupert Sheldrake has produced a testable hypothesis of morphic resonance: that the origins of form lie not only in the specific proteins coded for by DNA, but in fields of information (fields that put form into matter) of a nonphysical nature. These waves propagate across time, as suggested by species of rats which learn to perform the same trick with increasing proficiency across generations, regardless of the specific population or physical proximity. The idea that organisms and even minerals share a collective memory outside of physical space-time can be tested, but remains unfunded. These frame-breaking notions vegetate in a climate of general suspicion.

Giordano Bruno burned at the stake for prophesying a cosmology identical to ours. He pursued a unified vision with every means at his disposal, regardless of the consequences. What’s our excuse?

We can remain complacent and insist that theory is best left refined until it magically sprouts legs; we can ruminate confidently how this whole mind business is inside the skull, how it’s only a matter of time before science lays it all out and restores order; we can be a good wife, a good father, a company woman, or a bohemian.

But what if we dare to live the realization, that the world out there and the world inside us is the same process doing the same thing? What could happen if we tried to express the unity in this vision?

Don’t fear being lumped with the new agers, the totalitarians, the cultists, or the nihilists. Don’t fear the spotty bibliography and the marginal scholarship. Talking systematically at length about the occult is part of the pursuit of knowledge. Something can be “all in your head” or “work fine on paper” and still be of vital important to how we see the world.

Following intuition into structured inquiry––however unorthodox––will never fail to put you on the side of history.

ARTHUR SCHECTER B’16.5 was just listening to an interview with Genesis P. Orridge and Robert Anton Wilson, and pretty much approves of life in general.