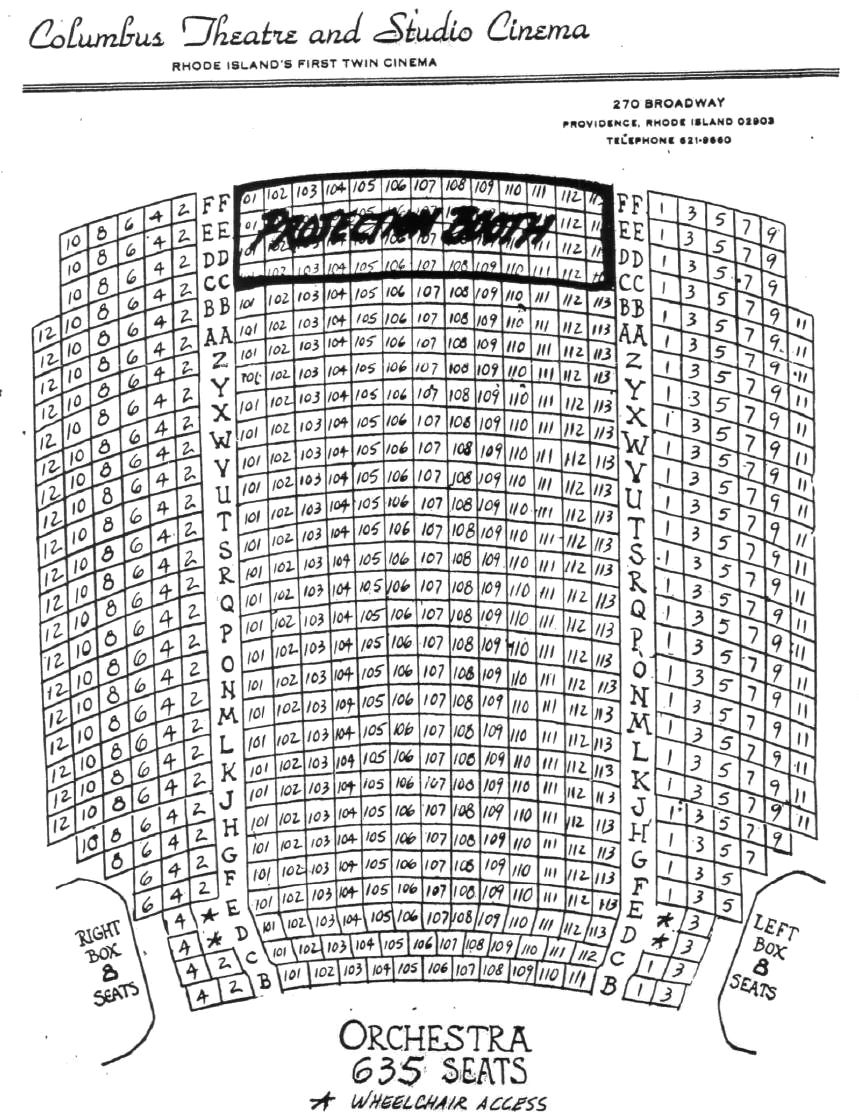 Before Misak Berberian bought the Columbus Theatre in 1962, a previous owner, facing financial trouble, allegedly tried to set the building on fire to collect insurance. Made almost entirely out of concrete, the Theatre failed to ignite, but a burn still mars the mural above the main stage. The mark is visible from the Theatre’s gilded balcony and serves as a permanent reminder that the Columbus, while now a major player among Providence’s music venues, is in many ways only barely transcending dilapidation.

Ben Knox Miller, guitarist and vocalist of Providence-based band The Low Anthem, told me the story behind the burned mural as we hurried around the Theatre on Thursday, February 6, in the hour before funk singer Charles Bradley took the stage. Miller and the rest of The Low Anthem were instrumental in the reopening of the Columbus, which, until November 2012, had sat dormant for several years in Providence’s Federal Hill. Since then, The Low Anthem and others have transformed the Columbus into a fully operational recording studio and venue, where the band is currently finishing its latest record and where artists including Chain & the Gang, Bonnie “Prince” Billy, and Ed Askew have performed. A quick scroll through the Columbus’s website shows that its acts have become more recognizable since its first shows in 2012: Marissa Nadler is slated to perform there in March, as is Fred Armisen. As the revitalized Theatre gains prominence, it is attracting increasingly impressive names to a once-neglected part of Providence—a city that has recently undergone a creative renaissance of its own.

The Columbus’s marquee glows unsteady over Broadway, its lettering inconsistently illuminated. Built in 1926, the large, ornate Theatre originally featured silent films and vaudeville acts. It changed hands several times throughout its early years and struggled to stay in business—hence the rumored arson attempt—until Misak Berberian purchased it in the early 1960s. His son Jon, now in his eighties, soon took over the business and is the space’s current owner. Throughout the fifty years in which the Berberians have owned the Theatre, it has functioned as a music venue, a studio, a playhouse, and, for much of the late twentieth century, an adult movie theater.

Due to financial struggles and changing fire code regulations for theaters and music venues—which were tightened radically throughout Rhode Island following the 2003 fire at the Station Nightclub in Warwick—the Columbus closed on and off for several years. In 2009, the Theatre was finally forced to shut down, seemingly permanently. For two years, the Columbus sat empty as Federal Hill developed around it.

In 2011, The Low Anthem stumbled upon the space, largely by accident. “The only reason it came onto my radar,” remembered Jeff Prystowsky, The Low Anthem’s drummer, “was because we were coming off of a tour where in every town we played a venue like this. So when I went to get a slice of pizza at Gusto, across the street, I was looking at this place. My mind was still in that tour mindset: arrive at a town, look for the venue, look for the pizza shop. And it was our first day home, so I looked for the pizza shop, and I found it. And then it was like, where’s the venue? And I was like, there it is. And then I was thinking, wait a minute, that’s the place that’s been closed for years.”

The Low Anthem approached Berberian about renting some of the Theatre's rooms for use as a recording space. “He was just so excited that someone cared about the Theatre that he was glad to have us in it,” Miller said. “He let us record in here when there was nothing going on….We were just making music in the space and trying out different recording techniques, which is kind of an interest of our band.”

“The environment definitely has an effect on the music,” Prystowsky told me as we stood in the Columbus’s bright lobby. “You’re always making music in a space; you’re playing this thing in this room in this place. So if you have a room itself that is inspiring, then when you play—it’s inspiring to have music come out of you that you didn’t know you had in you.”

It’s not hard to see how the Columbus might be conducive to producing the sorts of cavernous, reverb-heavy sounds for which The Low Anthem is known. If you don’t look too closely, the Theatre is daunting. Its main stage is enormous; its red and gold coloring lends it an air of opulence. Stained glass and murals of classical gods and goddesses decorate the walls and ceiling. Every surface that could be carved has been carved; intricate acanthus designs adorn every wooden table and mirror and piece of molding. The Theatre does not feel like a fixture of 2014, but rather like some bizarre, excessive, vaudeville time warp.

If you spend enough time in the Columbus, though, its cracks become apparent. Chunks of carved molding have fallen away; splotches of paint discolor the ceiling. Panels are missing from the glass fixtures above the seating area. The red leather seats are in many places cracked, stained. “It’s grandiose but it’s dingy,” Miller told me, as we watched Charles Bradley’s band sound check from the balcony. You can see the burned mural from there. “But I love the energy of this place. It’s bizarre, it’s dilapidated.”

Miller recalled the band’s first few months as tenants at the Theatre. “When we moved in here it was like this bizarre, ghostly attic,” he said. “Stuff dating back many generations was just tucked in corners. It was really fun, that time right when we moved in. It was really spooky.”

Much of the clutter—from generations past and present—remains in the Columbus’s many hallways and back rooms. The main stage and seating area are tidy and well kept, but incongruous remnants of the Theatre's many iterations can be found throughout the rest of the building. A statue of a saint prays alone on a back stairwell. Upstairs, leftover props from an old music video shoot, including an inflatable dinosaur, lie around haphazardly. For a while on Thursday night, a huge red luminescent C—ostensibly a remnant from the logo on the marquee outside—was leaning against an upstairs wall, plugged in and lit up, until somebody complained that it smelled like something was burning.

After renting studio space from Berberian for several months in early 2012 and hearing him discuss his desire to reopen the Columbus as a venue, the members of The Low Anthem decided to help him bring the Theatre up to code. They formed a group, the Columbus Cooperative, with several friends, including musicians, the manager of Providence band Brown Bird, and a bartender. “We all had a compatible set of skills,” Miller said. “And we all just like each other a lot.”

Staffing the Theatre on a volunteer basis, the co-op cleaned up the space and organized a benefit show in November 2012, billed as Revival!, to kick off the Columbus’s renaissance period. The Low Anthem performed, along with Brown Bird and several other Providence acts. The event sold out.

The Columbus Cooperative continues to maintain the space and head the Theatre's programming. As volunteers, the members of the co-op book bands, collect tickets, and sell drinks. In the year and a half since the Theatre reopened, they’ve been able to start hosting multiple shows a week. However, large-scale shifts toward a more sustainable business model—perhaps one that includes a salaried staff and more consistent programming—are a distant goal. “Everyone in the co-op has their different things that they’re doing, so we’re taking baby steps,” Prystowsky said.

Despite the increasing prestige of the Columbus’ performances, it’s still clear in many ways that the venue is volunteer-run, that its resuscitation is still underway. In a space that was once exceptionally ornate but that is now being run by a small team of twentyand thirty-somethings, there’s an implicit tension, an undercurrent of scrappiness amidst the building’s grandiosity. It’s in the CASH BAR sign, scrawled in Sharpie on construction paper and taped to an elaborately carved mirror; it’s in the pervasive smell of weed in a gilded backstage hallway built in 1926. It’s in the flickering marquee outside and the charred mural above the stage.

“The history of this building, dating back through the past fifty years, it’s been a history of caring about the building and working hard to keep it operational, but it hasn’t really been about appearances,” Miller told me. “Stuff has been done in a fairly cheap way just to make ends meet. Whether that’s meant showing porn or whatever, it’s always been about surviving. But also—there’s a certain magic. The owner just loves this place, and we feel the same way about it. We don’t need to dress it up, we don’t need to take the edges off. We love them. We love the fact that it’s all this guy’s work, for 50 years…it just gives it such character. You feel like people’s hands have been on it.”