notes on the second card of Tarot’s Major Arcana 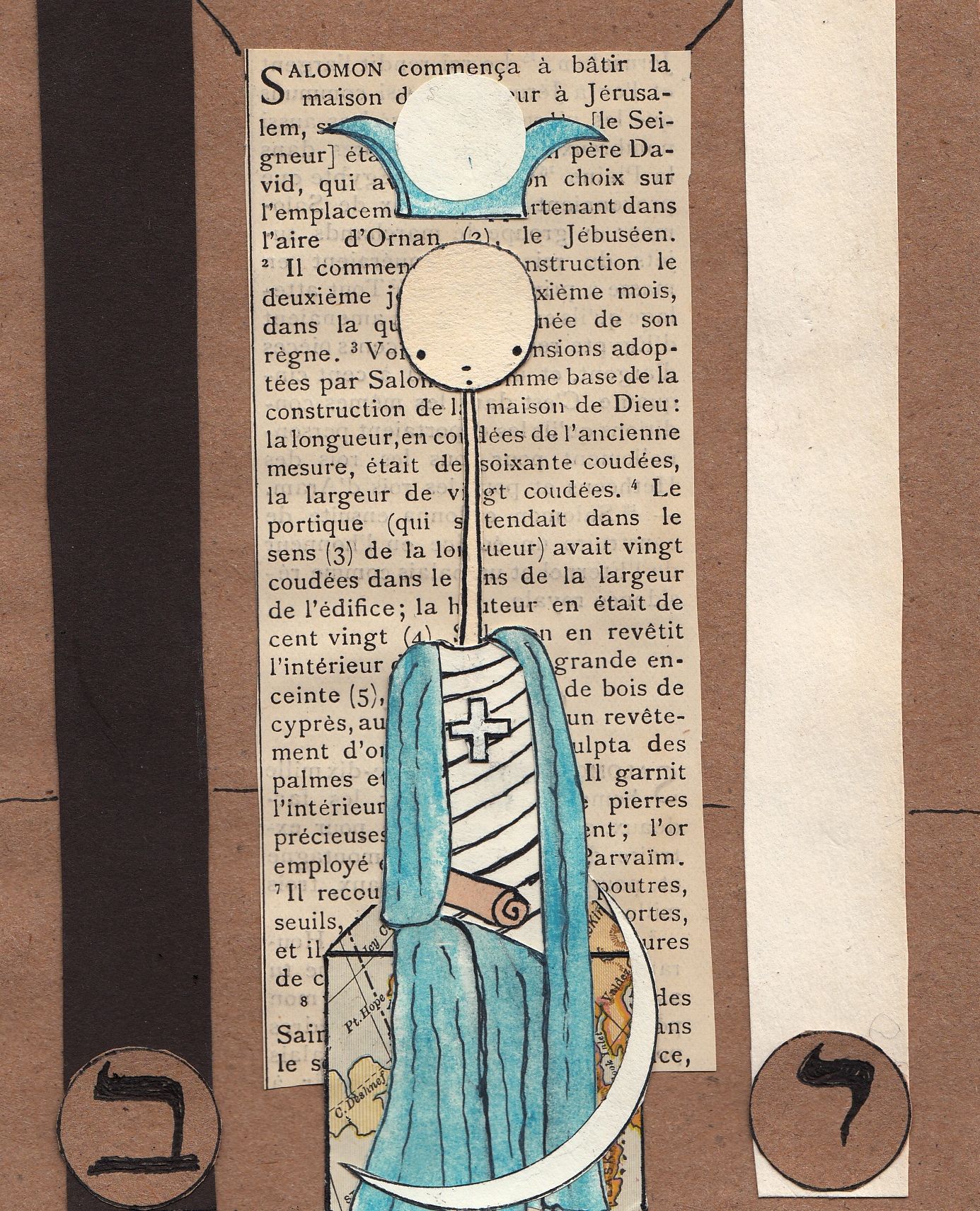 We find, on the Tarot card of the High Priestess, a woman, cloaked in a blue mantle, a white cross of equal beams on her breast, a waning crescent at her feet. Her crown glows blue white. Two crescents and an orb evoke the cycle of reflected light on the moon’s surface. On her lap rests the scroll of Torah, half shrouded—a reminder that Truth or Law is sometimes explicit, and other times implied, unlocked through Understanding rather than Wisdom. She sits in equipoise flanked by twin columns, identified by Hebrew initials as Boaz and Jachin, the ornamental, free-standing pillars at the vestibule of Solomon’s Temple.

The words Boaz and Jachin have baffled biblical scholars and occultists for centuries. We find two figures in the Hebrew Bible with these names, but there appears to be no logical connection between these characters and the pillars at the Temple. With no clear referents in the Hebrew lexicon, these words probably began as proper names or foreign loanwords. It may be that their etymological opacity is precisely why they have become important in the occult sciences; in the absence of a clear explanation, we must render these relic names magical through our own study and meditation on the collected symbolism of the card.

the High Priestess before the Veil,

on the threshold where two become One:

Idea of fullness of womanhood above.

Bet (ב) and Yud (י), the initials of Boaz and Jachin, do more than identify the columns. In Gematria, Hebrew numerology, they correspond to two and ten respectively. These numbers have several significances in mysticism, Judaism, and the Tarot. It can be hard to sift out what is relevant from what is irrelevant. As with the occult sciences in general, anything that can be read into a Tarot card is there already: insofar as the High Priestess is associated with transcendence through a deeper understanding of Torah, the numbers suggest the two tablets of the Ten Commandments. More secretly, however, these numbers correspond to emanations of Divinity.

According to Kabbalah, God the Infinite revealed itself through 10 successive, continuous emanations. These emanations, attributes of Divinity, are organized in a vertical diagram extending from Keter, “Crown,” incomprehensible to the human mind, to Malkuth, “Kingdom,” the created world below. According to the enumeration of Kabbalist Isaac Luria, the second and tenth enumerations are Binah, “Understanding,” and Malkuth respectively. Binah is Divine Understanding, mystical illumination bestowed upon the occult student not for her active, eager pursuit of knowledge, but for her silent, diligent contemplation. Malkuth, the final emanation, is the created world. It is not worldliness, however; it is the Divine Blessedness which inhabits all created matter, reflected from Keter on high, to the kingdom below.

effortlessly shining with a brightness that is not her own—

and she is the reflected light itself.

what is woman in the numinous Androgyne,

female face of the hermaphroditic Godhead,

who dwells in the Fullness beyond the Veil.

In the Temple of Solomon, one would have passed west through the pillars—Boaz to the north, Jachin to the south—to enter the Holy Place. A veil of blue, purple, crimson fabric and linen cordoned off the Holy Place from the Holy of Holies, the Dwelling of Divinity, center of the world below. In the days of Solomon’s Temple (from the 10th century BCE until the Babylonian siege in 586 BCE), the Holy of Holies housed the Ark of the Covenant, covered over with its golden lid, the seat for the Presence of the Divinity. As a literal locus of God’s Presence, no human could enter the Holy of Holies except the High Priest, and only on Yom Kippur, the holiest day of the year. In the Second Temple, the construction of which began at the close of the 6th century BCE, the Holy of Holies retained its ritual function; although the Babylonians had looted the Ark of the Covenant, the Holy of Holies still remained a literal dwelling of Divinity, albeit empty.

Ministress of the Mystic Temple above—

the macrocosmic Sanctum of the Incomprehensible,

the manifest Mansion of the Immeasurable,

whose name stretches beyond Alpha and Omega,

center of the Kingdom above,

where all that is two is One.

A cursory look at the card, however, reveals that this is not the terrestrial Temple of Solomon. This is the Mystic Temple, celestial macrocosm, the literal, of which Solomon’s Temple is the material, mundane metaphor. The layout is abbreviated, or altogether reimagined: a veil hangs between Boaz and Jachin; there is no Holy Place between the pillars and the Holy of Holies. The identification of Boaz and Jachin with Binah and Malkuth further complicates our spatial understanding of the card. Traditionally conceived as part of the vertical hierarchy of the emanations, here we find them on the same horizontal plane—one is neither higher nor holier than the other. The veil, a symbol that usually divides the higher from the lower, connects them. This is not to suggest that they are the same thing, or serve the same purpose. Whereas in the Temple of Solomon, Boaz and Jachin were wrought from bronze, here, Boaz is black, Jachin white. They are twins, yet opposites. We are reminded that true opposites are similar, but for one defining quality or characteristic.

she fills valleys and vessels.

Immanence of the Immanent.

it is she who says:

“I am the silence that is incomprehensible.”

How are we to understand the symbolic opposition of Binah and Malkuth? What is similar? What characteristic distinguishes them? The answer lies in the person of the High Priestess, in Presence, Divinity Inactive. The Understanding associated with Binah is simply present, just is. Understanding rests, fills, molds to its container and becomes its container. Malkuth, on the other hand, is the container that becomes the contained. The kingdom below, insofar as it contains the Divine Presence, becomes divine itself. Both are manifestations of the Divine Presence, but in different, and opposite modes. Binah is associated with the internal, the intellectual, ascent into heavenly realms. Binah transports the student who, in repose, has unwittingly unlocked the deepest mysteries of the unwritten Law. Malkuth is associated with the external, the physical, the descent of Divinity to the earth. Through Malkuth, the student inadvertently discovers the secrets of the universe inscribed in a blade of grass.

What are we to make of the area beyond the veil? In Solomon’s Temple, we would expect to find the Holy of Holies. In the Mystic Temple, however, the Divine Presence is not relegated to a cube chamber, but spreads over the boundlessness of infinity. It is here, between and beyond the black and white pillars, where distinctions fall away, where Binah and Malkuth are simply Presence. It is here where opposites rest in sameness, where dualisms converge—black and white, male and female, above and below.

two-personed Presence, above and below:

sister of Sophia, but not so curious;

Malkuth below, terminal pool of the overflowing Divinity,

sacred seed in every heart and every quark,

by which all that is below manifests what is above.

ELI PETZOLD B’14 was born on July 15 and has a black Army/Navy backpack.