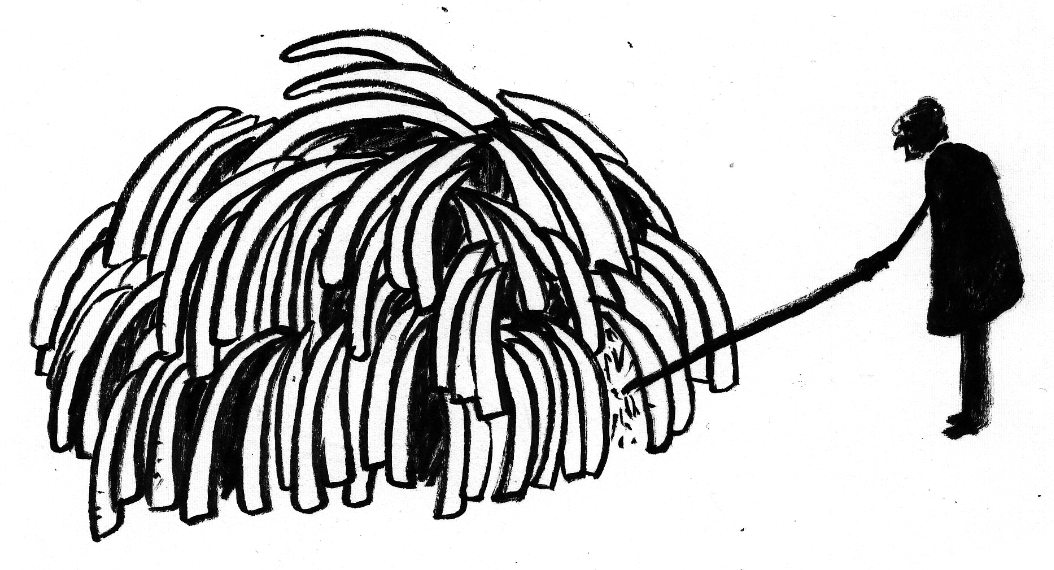 Stuff your cheeks and fill up your pockets. More is always better, right?

A BONE TO PICK

“I kind of regret that everything sort of went the way it went,” said Peter Chernecki at his sentencing this week.

Peter and his wife Judith had built what they considered a comfortable canine conservatory. The Gull Lake, Michigan residents hoarded—or as they claim, “rescued”—64 apparently stray dogs, only to keep them in a 672 square-foot windowless annex. Their project was found out by provincial animal protection officers who were distributing leaflets to warn against feeding local bears in July 2010. The couple has now been found guilty of violating the Animal Care Act.

The best of us make the worst mistakes. It all started when the Cherneckis visited a local landfill to leave bread  and bones for roaming bears. After a couple visits, they soon realized the site also harbored a community of stray dogs. Peter and Judith saw an opportunity to do good. “If they were at the garbage dump they’d be dead or they’d be wild now,” Peter explained to the Global Winnipeg. “Then you’d have a pack of wild dogs running around... .What am I supposed to do, leave them in the elements?”

While Peter later expressed remorse, Judith was bewildered by the accusations of mistreatment. “This really hurts me, because we did the best with the situation we had at the time,” she said. “The dogs ate better than some people eat, they had garlic sausages, they had smokies.” Sausages and “smokies,” of course, do not constitute a dog’s healthy diet.

Although many people in the area picked up on the never ending orchestra of barks, and often the overwhelming smell of urine, no one intervened. Lindor Reynolds, a journalist at the Winnipeg Free Press, wrote a damning editorial questioning the lack of responsibility shown by neighbors. Most thought there were no more than twenty dogs––a restrained amount for an animal hoarder––and, as Reynolds found, most neighbors, when pressed, responded with the same answer: “We keep to ourselves.”

Along with fines and a possible jail sentence, the couple faces a five-year prohibition from owning animals. It will surely prove to be a sad case of cold turkey. Except, of course, there will be no turkey this time.

This would also bring an end to Judith’s side project in cat collecting. Forty-two were found when the Chernecki house was inspected. Judith said that the cats give her “meaning and purpose.” Such a sentiment makes it hard to believe the couple will ever give up their hobby. According to The Humane Society of the United States, animal hoarding has nearly a 100 percent recidivism rate. – SC

The world’s largest stockpiles of ivory are going up in smoke. Or rather, in the case of the United States, they’re going up in dust. On November 15, 2013, President Obama ordered 5.4 tons of US government ivory, seized from illegal smuggling and sales in the past 25 years, into a rock-crushing machine at the Rocky Mountain Arsenal National Wildlife Refuge in Colorado.

The Philippines destroyed its five-ton ivory stockpile last June, and China followed suit in January. Kenya burned large piles twice in the 1980s and 1990s; Zambia and Gabon did the same in the '90s. Hong Kong, the main portal to Asia for the ivory trade, has vowed to take the plunge and will likely be the latest country to destroy its stores; government officials told CNN that its 28 tons will be destroyed in three-ton batches over the next few years. The risks of such stores around the world became apparent in June 2012 when, in a matter of days, three tons of tusks were seized from Zambia’s Wildlife Authority and 26 tusks were stolen from a vault in Botswana.

The main purpose of destroying the stockpiles is to send a message to poachers that black-market ivory will never make them a profit. In the past few years, calls for this message have grown, as preservationist groups uncovered that profits from the ivory trade fund para-military and terrorist groups, including Joseph Kony’s Lord’s Resistance Army. The Somali terrorist organization al-Shabaab—most notorious for the four-day siege on the Westgate shopping mall in Nairobi last year—derives about 40 percent of its funding from poaching and trading in ivory.

As much as policy makers hope, the smoke and dust from the United States and Asia probably won’t carry to the eastern coast of Africa. Meanwhile, on the ground in Kenya and Somalia, the returns for killing an elephant and stripping its tusks remain huge, between 50 and 100 dollars per kilo, though that pales in comparison with the $3000 netted for the final sale, 70 percent of which happened in China in 2013.

Any country’s action to curb the ivory trade will have worldwide reverberations, and the countries where the most ivory is harvested and sold are realizing the need for coordination. On February 13, 50 state leaders from around the world will gather in London to discuss ways to curb the illegal international wildlife trade. At the top of their docket will be the ivory tusks of African elephants.

Elephants keep dying, people need a way to feed their families, and the cycle continues. Destroying one’s own reserves doesn’t logically make the rest of any resource worth less. But with each pyre that is pulverized or incinerated, the shock of destroying ivory stockpiles subsides and such behavior seems like the norm. – EW

When a massive sporting event comes to town, they say, the locals try to get out of Dodge. The residents of Sochi, Russia, however, may want to stick around to prevent their homes from being burglarized by the staff of the upcoming Winter Olympics. Sochi, it appears, doesn’t have enough pillows for all its athletes, and is attempting to remedy the situation by stealing them from local homes.

Normally, this would be understandable—the Olympics are a big production and Sochi has undoubtedly spent a great deal of its resources double-checking that the coast is entirely clear of homosexuals before the opening ceremony on February 7. (You think Mitt Romney wasn’t frantically stealing margarine and top sheets from Utah families in '02?) The real mistake was not keeping it a secret. The pillow shortage has been so disastrous that Sochi’s hospitality team has taken to Instagram to alert staff of the situation. Olympic caterer Luiza Baybakova recently posted a message notifying the community, using rhetoric that would make politicians from any country proud. Citing “an extreme shortage of pillows for athletes who unexpectedly arrived” in Sochi, Ms. Baybakova announced “a transfer of pillows from all apartments to the [Olympic] storehouse.”

But if Baybakova’s Instagram followers were too busy chortling at the idea that Olympians could arrive “unexpectedly” to the Olympic Village or marveling at the euphemism jiu-jitsu that turns ransacking homes into a “transfer,” they missed some incredible hashtags. “#Sochi2014 #Olympics #OlympicCamp #OlympicVillage #ManyAthletes #PillowForEveryone #TakingPillows #CantSleepWithNoPillow,” Baybakova posted, possibly missing the irony that the last hashtag describes precisely what the people of Sochi will have to do while the athletes are in town.

Later Baybakova posted a picture of a pillow with the hashtags #TheyreTakingOurPillows #OlympicPillow #WhereDoAthletesComeFrom #PlzDontTake. It’s unclear what’s happening there. Baybakova could be mocking the soon-to-be pillowless residents or the post could be an attempt at empathy featuring things she imagines people might say while Olympic officials steal things from their bedrooms. The question #WhereDoAthletesComeFrom is complicated, and maybe one of the only questions to which “hard work,” “85 countries,” and “wombs” are all acceptable answers. Not everyone in Sochi shares Baybakova’s irreverence, though: “Fuck…,” one commenter posted under the pillow picture, “and now the whole world laughs…” – SR