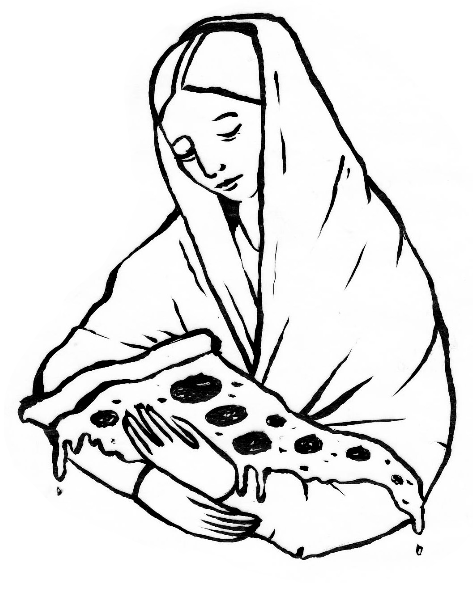 This holiday season was tough. Surely, no one at UPS wished for the harsh snowstorms that prevented the timely arrival of countless Christmas presents. Confidence is low. But it’s a new year, and everyone deserves a second chance. From us to you, it’s the week in delivery.

The preeminent pro-life organization on the web is making its mark on your smartphone. The Online for Life “Prayer App”—which went viral at last week’s March for Life, the largest pro-life event in the world—makes praying for the unborn as easy as up-voting a potential mate on Tinder. The process is simple: scroll through a list of potential sinners and select a target. Then swipe left over a message about someone considering abortion in order to pray that she changes her mind. An orange-tinted picture of an adorable child and the announcement “Prayed!” replaces the message. It’s so easy, you may save a few lives by accident as you try to scroll down.

“The Online for Life Prayer App underscores the importance of prayer in the battle to end abortion,” its website states, “while involving the pro-life community in such a way that keeps them actively engaged in rescuing unborn children and families from abortion.” The app monitors Online for Life’s success in preventing abortions along with the individual user’s progress. By locating women who contacted, scheduled an appointment with, or visited a Pregnancy Resource Center—“faux-clinics” masquerading as health centers, whose only service is often to give sonograms and advise against aborting, without doctors or nurses on staff—the app makes a direct link between the user’s prayer, the work of these clinics, and a woman’s decision not to have an abortion. For each of the women who contacts one of these centers or decides not to abort, the Prayer App declares a victory. And for each swipe, subscribers are praying for a woman in a particular location—or more accurately, her child, “Baby number 1455” as of press time. When she “chooses life” the app posts a notification immediately, giving prayer the type of instant gratification Internet users have learned to expect.

The focus on babies saved is important—the Online for Prayer app makes no actual reference to women. Instead, it talks about the child and announces, for instance, that “Someone considering abortion in San Antonio” contacted a Pregnancy Resource Center. But that doesn’t mean that the mastermind behind the pro-life app doesn’t consider gender relevant. On the contrary, Online for Life CEO Brian Fisher sees stopping abortions as his duty as a man. The tag line to his book, Abortion: The Ultimate Exploitation of Women, reads, “Men started it. Men oppress with it. Men can end it.” With the swipe of a finger. –EW

Cops and Robbers is a children’s game derived from tag. Children split into two teams (cops and robbers). Cops run around to tag the robbers; robbers sprint to avoid metaphorical incarceration. The game was invented in 1931.

In his youth, Tuscaloosa resident Michael Antonio Long was never a huge fan of the game—too much running.

Long, 20, is a man who appreciates the comforts of the 21st century. He gets his mail delivered, his food delivered, his Netflix delivered. So, his solution to two of life’s most fundamental imperatives (food and rent) should come as no surprise. Armed with an empty stomach, an empty wallet, and a loaded gun, Long phoned up the local Domino’s and ordered a couple of pies for delivery.

The unsuspecting delivery boy strode right up to Long’s doorstep, where Long and a friend forcibly extracted the delivery boy’s wallet—and the two pizzas. Presumably thrilled with the efficiency of this “two birds, one stone” approach (an idiom which may have been all the more appropriate had the firearm been used), Long and his friend then sat around the living room table and feasted.

Though little is known about Delivery Boy, he seems to be an astute observer. Realizing that he had privileged knowledge of the perpetrators’ sedentary location, he promptly phoned the police, who had no problem locating the suspects. They too strode right up to Long’s doorstep and were greeted by Long and friend chowing down on cheesy contraband.

“We don’t typically see a suspect call a delivery driver to their actual address to commit a robbery,” remarked Tuscaloosa Police Sgt. Brent Blankley, enthused by the handiness of the whole ordeal. Blankley certainly has a point—hiding out at a crime scene, which doubles as home, hardly seems to fit the criminal mastermind aesthetic.

Running around was all well and good for the 1930s, but this is a different era, one of couch-side convenience. To call Long a lazy criminal seems too pejorative; to call him a modern luminary seems overblown.

Let’s just call him hungry. -AS