The case for line-item veto in Rhode Island 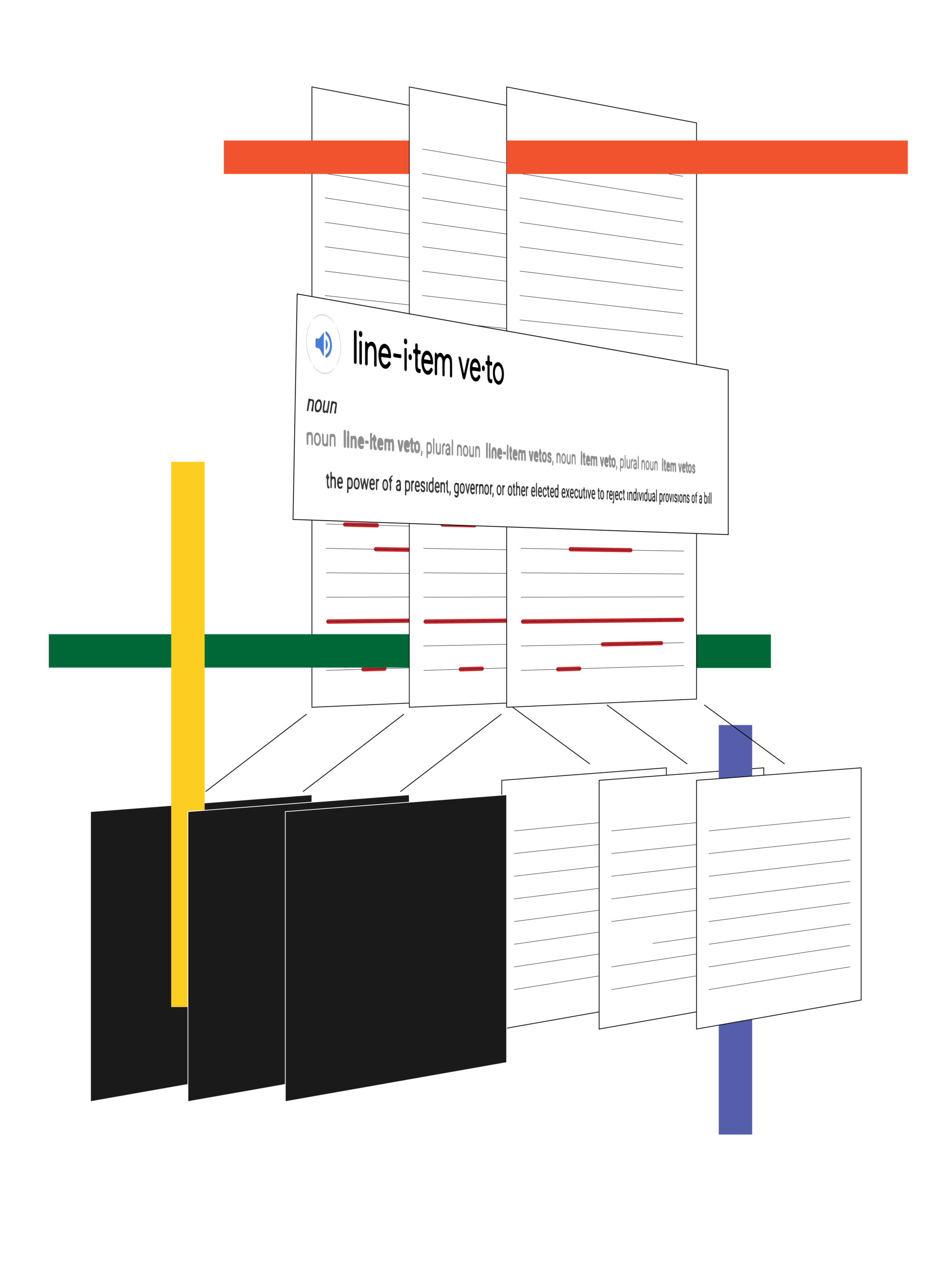 Paying Little League umpires. Repairing leaky, all-male social club roofs. Buying shuffleboards and installing hair dryers. For decades, members of the Rhode Island General Assembly have doled out “legislative grants” to organizations for missions such as these with little oversight, helping legislators secure the support they need to win reelection year after year. House and Senate leadership—usually conservative Democrats—control the distribution of the grants, allowing them to keep control over their members. Those who vote with leadership and don’t complain get special favors, while those opposed to leadership—progressive Democrats and Republicans—are left high and dry. These earmarks are a tiny portion of the state’s $10 billion budget—in 2020, the General Assembly put aside only $2.2 million for the grants—but this style of doling out taxpayer money is indicative of greater dysfunction and imbalance of power within the Rhode Island state government.

The General Assembly can get away with such blatant ‘pork barrel’ spending— that is, spending on budget items that target the districts of individual legislators—because power is concentrated in the hands of House and Senate leadership. The reason? The office of the Governor in Rhode Island is relatively weak, giving the executive branch few ways to shape the budget that forms every year in the General Assembly. In particular, the governor doesn’t have a line-item veto: the ability to veto or change certain appropriations within the budget passed by the General Assembly.

Rhode Island is one of only six states in the country without a line-item veto. Consequently, it has one of the strongest and most corrupt legislative bodies in the nation. Budget deals are made in back rooms by a ‘good old boys’ club and lobbyist legalese is added via amendment to legislation at the last moment, giving unfair advantage—such as choice legislative language or specific financial handouts—to special interest groups, all without the oversight of the governor. Thus, the question of a line-item veto is about more than just legislative grants, hair dryers, and Little League funding. It’s about how power fundamentally operates within Rhode Island.

The system of checks and balances between branches has always been crucial to the United States’ system of government. At the national level, when the two Houses of Congress pass a bill, they must send it to the chief executive, the president, for review. The president has two options: they can either sign the bill into law or send it back to Congress, vetoing the bill in full. This veto can be overridden by a two-thirds vote in both houses. To a large extent, the legislative process at the Rhode Island state level mirrors that of the national one. When Rhode Island’s General Assembly passes a bill, they then send it to the governor to sign. If the governor does not sign and sends it back to the Assembly, vetoing the bill, the Assembly can then override the veto with a three-fifths vote.

In some states, however, the governor has more than two choices to make. In contrast to Rhode Island, the constitutions of 44 out of 50 US states give their governor some ability to alter specific items in a bill or budget instead of vetoing that piece of legislation in its entirety. Just like a regular veto, state legislatures have an opportunity to override this ‘line-item’ veto. Different states give different levels of line-item veto power to the governor, and have different vote thresholds that legislatures must reach to override the governor’s veto. In effect, a more powerful line-item veto and a higher veto override threshold give the executive branch of a state more leverage over that state legislature’s budget or legislative decisions. But in states such as Rhode Island, the lack of any line-item veto power means the governor must choose between passing a budget full of extraneous spending and lobbyist favors or vetoing the entire budget, which could be very unpopular with the public.

Most state constitutions, such as Alaska’s, give their governor the ability to change the amounts of specific appropriations. Last year, Alaska’s Republican governor Mike Dunleavy used this to cut an additional $400 million from a budget approved by a then Democrat-controlled legislature, a budget already set to reduce state spending by about $280 million. The University of Alaska was hardest hit, losing $130 million, and Medicaid lost $50 million in funding. Other states’ constitutions, like Wisconsin’s, go further, allowing their governor to also change the language of appropriations bills, including wording and punctuation. In effect, Wisconsin governors can create entirely new policy at a whim. Last year, Wisconsin’s Democratic governor Tony Evers used this power to increase education funding in the 2019 budget by $65 million, among other changes.

In the case of Wisconsin’s 2019 budget, Evers’ vetoes were modest enough to withstand a two-thirds override from Republican legislators, and the legislature voted to sustain his budget changes. But in Alaska, three-fourths of the legislature must object to override a veto and in the end, the governor and only 21 allied Republican out of 60 state legislators had their way. This is incredibly unrepresentative. In short, the impact of a state’s line-item veto depends not only on the specific veto powers granted, but also on the intentions and political allegiances of both the governors who use it and the legislatures that it defies. As we can see from Alaska’s example, this power can have huge consequences. It’s not only a question of if a line-item veto should be implemented, but how.

“The lesson for me back then was that people who have power want to keep it,” Chafee told the College Hill Independent.  “Despite all the evidence of how this was better for the future of the state, the Rhode Island legislative powers kept out the line-item veto.” Decades later, as Rhode Island’s governor, Chafee experienced frustration with the General Assembly that could have been avoided if he had the executive authority offered by a line-item veto. “I’m not the only one to say that out of all 50 states, Rhode Island has the strongest legislative power,” said Chafee. “With a line-item veto you would be able to exercise more executive control over the direction of the state.”

Chafee added that a key strength of a line-item veto is the ability to bring issues to the public’s attention. Even if a governor's veto is overturned by the General Assembly, at the very least the public is made aware of that aspect of the budget or legislation and allowed to question why the General Assembly is making that choice. Chafee said the General Assembly’s legislative grant program is a perfect example of this lack of public ‘sunlight’ on an issue. Year after year, General Assembly leaders are able to slip the grants into the annual budget with little the Governor can do to check them.

Some more progressive legislators worry that a line-item veto will lead to more austere budgets in Rhode Island. Sam Bell, a progressive Democrat representing Providence in the Rhode Island State Senate said that for this reason, the type of line-item veto being proposed was just as important as the decision to implement one at all.

“The line-item veto that is being bandied about at the State House sucks,” Bell told the Indy. “It’s designed around brutal budget cuts. It’s exclusively a budget-cut-only line-item veto, which doesn’t address the problems that a line-item veto is supposed to address.” Instead of keeping legislative leaders accountable, Bell said, an ill devised line-item veto could be used to cut millions in social services, like the cuts made in Alaska. But he also opposes a veto allowing the governor to unilaterally change the meaning of bills, like in Wisconsin. With that in mind, Bell thought a line-item veto should be laser-focused on two things: removing extraneous language in legislative bills (often added by corporate lobbyists in last-second amendments) and eliminating specific, but small appropriations—such as the existing legislative grants program—slipped into the budget by the General Assembly.

A line-item veto, if done right, isn’t just a measure to cut services and balance budgets. It’s a way to shift the balance of power at the State House away from General Assembly leaders and towards the executive branch, adding another layer of accountability to the budgeting and legislative process.

When Sam Bell referred to the budget-cut-centric line-item veto “being bandied about in the State House,” he was referring to a 2019 bill introduced by State Senate GOP leader Dennis Algiere. If passed, this bill would give Raimondo a power similar to that of Alaska’s Dunleavey, one that, depending on Raimondo’s definition of wasteful spending, could either be used to cut budgets or reduce corruption. But the bill never even received a hearing, and furthermore, the General Assembly does not have the power to institute a line-item veto alone: were either of the two versions of the bill to pass, the question would be put to the public via referendum.

However, at the start of the 2020 legislative session, Algiere introduced a new bill that would give the governor an alternative to reducing appropriations: the ability to ‘disapprove’ of any item of an appropriations bill. This would allow a governor to express broader ideological complaints to budget items. Most importantly, this new bill also ensures that if appropriations are reduced due to governor disapproval, that money “shall not be reduced but remain as part of the general appropriated funds.” In essence, this new language in the 2020 bill would give the governor the power to make cuts to specific line items and suggest new areas for spending without reducing overall government expenditures. For example, the governor could make cuts to the legislative grant program and suggest putting that money into affordable housing or environmental remediation.

In general, any line-item veto, by taking power away from General Assembly leaders, would shift power back to the governor, cutting down on the crony elitism that has run our state for decades. A line-item veto isn’t only about those tiny legislative grants going to Little Leagues and obscure social clubs. At its core, a line-item veto is about where we want to distribute power in our state—vested in the hands of a few elite legislators, or spread across the branches of our government, in full view of the public eye.

LEO GORDON B’23 & PEDER SCHAEFER B’22 are against a line-item veto for Indy Managing Editors.