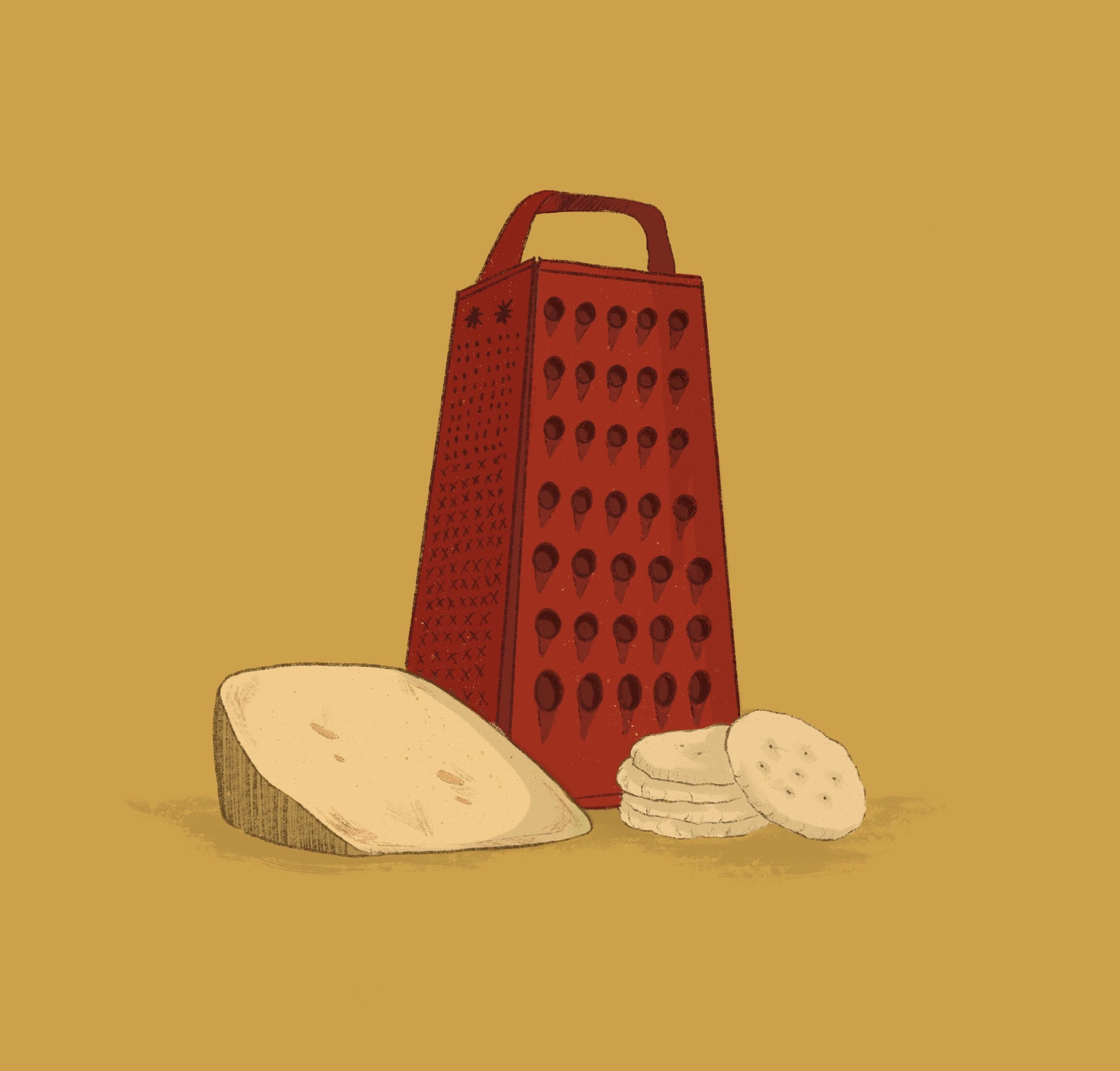 “The only thing about being way up high that sucks is you’re too far to see down ladies’ shirts.”

Terry told me that on our first cheese run. Since I started here, they’ve been sending me out on cheese runs, with Terry, usually. We get boxed chardonnay (served to customers in a carafe) and apples, too. Terry’s been at Rainbow, a hot air balloon tour agency, for longer than I have, but it’s his full time job. It’s pleasant, especially when you’re on a cheese run with Terry.

After he told me that about the shirts, I didn’t laugh, so he apologized. I said it was alright and he smiled again. I was just focusing on the road, I said. He said:

“Don’t take me too seriously. I’m just being a goofball is all.”

I told him it was alright, and then when the lady at the Whole Foods cut us off a block of cheddar, Terry said:

“She just cut the cheese!”

I laughed. I might be too well-bred to make that joke, but I’m not too well-bred to laugh at it. I told Terry it’s okay, I won’t take him too seriously. He says that same thing every time we go to Whole Foods on a cheese run, and at this point I just smile, trying my best to appear good-naturedly. I think Terry is married. I bet his wife laughs at his jokes.

Earlier in the summer, after that first time, I went on a cheese run with Terry, and he had a heart attack in my passenger seat. His red, pockmarked face became even redder, like an Original Babybel Mini. He groaned, and he grabbed at his chest. Terry’s fat. I’m a scout. I pieced things together.

We were pretty close to the Whole Foods, so I finished driving there and called 911 in the parking lot. Then I went into the store and asked Is there a doctor here? Some lady was, so she came out to the car. I helped her get Terry onto the ground where she could do CPR. I figured she had everything under control, and I went back into the store and got the cheese. When I paid, Terry and the woman were gone. I drove back to Rainbow.

My manager, Abby, asked me where Terry was and I said Probably the hospital. Then I put the cheese I’d bought in the refrigerator. Rainbow’s office is a prefab building the size of a gas station with four rooms: the welcome area (for customers), the lounge (with the refrigerator, for employees), a single occupant bathroom, and a maintenance closet. The floors are wood-look vinyl and the furniture is all industrial particleboard. She asked me How come? and I said Terry had a heart attack so an ambulance picked him up. Then I asked if she’d train me to operate the balloons. She said:

“I guess now if Terry’s going to be gone for a while I might as well.”

I thanked her. I only applied for the job at Rainbow so I could become a balloon operator at some point. They usually only train people to operate balloons when it’s their second year working there. First year employees take calls, welcome customers to the facility, and get cheese. Balloon operators do all those things too, but they also get to go up, which customers pay good money for. Operators get to do it for free. That’s how I became a hot air balloon operator for Rainbow Balloon Tours.

Terry got back to work after only a week or so. On his first day back, he walked up to me in my red operator-trainee polo and told me:

“I can’t thank you enough, Del. My wife wants to know if you’d come have dinner with us some night. And here’s this. I think it’s fitting.”

He handed me a cold wedge of cheddar with a blue star on the label. I said Just glad you’re alright, name a night and he said Thursday? and I said Sounds great, then I went to the lounge, marked my cheese (so nobody would think it was for a platter) and put it in the fridge.

On Thursday night, I put on a polo and khakis and drove to Terry’s house, the Ziffer’s. Mrs. Ziffer opened the door when I knocked and said:

“Del? Come in, come in! I’m so glad to meet you! I’m Sandra. Thank you so much for saving Terry. Gosh, sometimes I wonder what would’ve happened if you weren’t there. Come in before you get totally soaked!”

I replied in some modest way, I forget exactly how. I might’ve said:

“It was mostly the paramedics who did everything.”

“What else could I have done?”

But I’m sure I didn’t tell her that I left Terry and bought expensive cheese while he was being loaded up into an ambulance. Either way, she beckoned me excitedly into their home, a thinly green split-level with a muddy spare tire in the unmown lawn.

“Oh, take your shoes off if you wouldn’t mind.”

The appreciation I felt for my socks was significant enough to stay my foot for a moment. The carpet didn’t look so good, but I’m a scout, and I took my shoes off.

The dining room revealed itself to be colored the same as the outside of the house. A powder blue tablecloth covered a small circular folding table in the center of the room. Above a body mirror mounted horizontally on the wall, a polaroid image of younger Ziffers at a beach tilted slightly to the left. Terry was fat then also. He spoke invisibly from the kitchen:

“Del, would you like a drink? I’ve got bud light and bud heavy.”

I said: “Water would be good, thank you.” I’m too well-bred to drink underage. Terry said:

He brought me a glass of ice water. I’m not too well-bred to laugh at a joke. I said:

He thanked me and welcomed me to their Humble abode. I didn’t say Humble is right, but I thought it.

Smiling, without showing her teeth, Mrs. Ziffer indicated that I should sit down on a folding chair at their table. Her eyes were like puddles of standing water in the spray-tanned folds of her face, the extra cheek flesh accommodated by a stretched forehead. Terry had the same look. I’m not too well-bred to say that they looked like yellow squashes picked from the same vine. Mrs. Ziffer said:

Before Terry finished finishing them up, Mrs. Ziffer and I discussed the hot air balloon business and my schooling at shallow depths. I believe her main takeaway was that I go to Regis and No, the commute isn’t too bad. The clink of fork on glass bowl and the squishing of boiled eggs from the kitchen provided syncopation to the tennis-like rapport of mutual inquiry between strangers. Terry entered with three egg salad sandwiches on burnt wheat bread and said:

Through bites of egg salad sandwich, I asked Mrs. Ziffer about how she spends her time. Since I know Terry, I figured asking him the same questions I was asking his wife would come off strangely, so I didn’t talk to him most of the time. In response to one of my questions, Mrs. Ziffer said:

“Terry does most of the cooking. He likes that stuff. Sometimes on weekends – well, you’ll think it’s strange, but I like it—sometimes on the weekends I go to sightseeing places like mountains with—oh, I make wooden dolls—I take my dolls to mountains and places like that and take photos of them there, like if they had climbed the mountain and were taking a rest.”

It felt as if I had just seen a swamp for the first time. I wanted to walk into it.

I probed her further, and she said:

We stood up and went down a short hallway, turned right, and finally left into a dark room. Mrs. Ziffer flipped a switch, revealing a storage room containing a worse folding table than the one we’d eaten dinner on, some boxes of disposable cups and plasticware, and a plastic tub in the corner which Mrs. Ziffer dragged into the middle of the room. She popped the lid off.

Inside were 20 or so dolls about eight inches tall and six inches around. They were made of bits of particle board, cut roughly and glued together. The bodies were triangular, forming wide hips and a pointed neck at the top. They were painted a solid color (often periwinkle), with white or gold dotted buttons down the front. The arms and legs were unpainted, which is how I knew they were particle board. Plastic hinges formed knees and elbows.

The faces, circular, about half an inch deep, were painted jet black. Wide white dots comprised the eyes, and the mouth was a thick, crimson smile. The hair was floppy black yarn.

I said that quietly, through a long breath. There was no amount of breeding that would’ve stopped me. I looked up from the box to see the last trace of a good-natured smile leave Mrs. Ziffer’s face. A nervous one took its place, and she said:

“Well, everyone has their hobby.”

Then I went quickly to the door, Mrs. Ziffer flipping off the light in ashamed tow. Upon arriving in the dining room, I apologized to Terry that I had to go. I thanked him for the egg salad sandwiches on burnt toast and stumbled in the foyer putting my shoes back on. I said Nice to meet you, Mrs. Ziffer! as I opened the door and quickly but quietly shut it in her slack face and Terry’s still unknowing, smiling one.

At home, hungry after only half a sandwich at the Ziffer’s, I went to the kitchen and took the block of cheddar Terry had given me from the fridge and a roll of Ritz from the pantry. I opened our silverware drawer, looked at the cheese knife, recalled the phrase “cut the cheese” as voiced by Terry, saw the dolls, and then closed the drawer before grabbing a grater from a different drawer and shredding the cheddar over a neat line of crackers.