The Plight and Fight to Vote as an American Immigrant 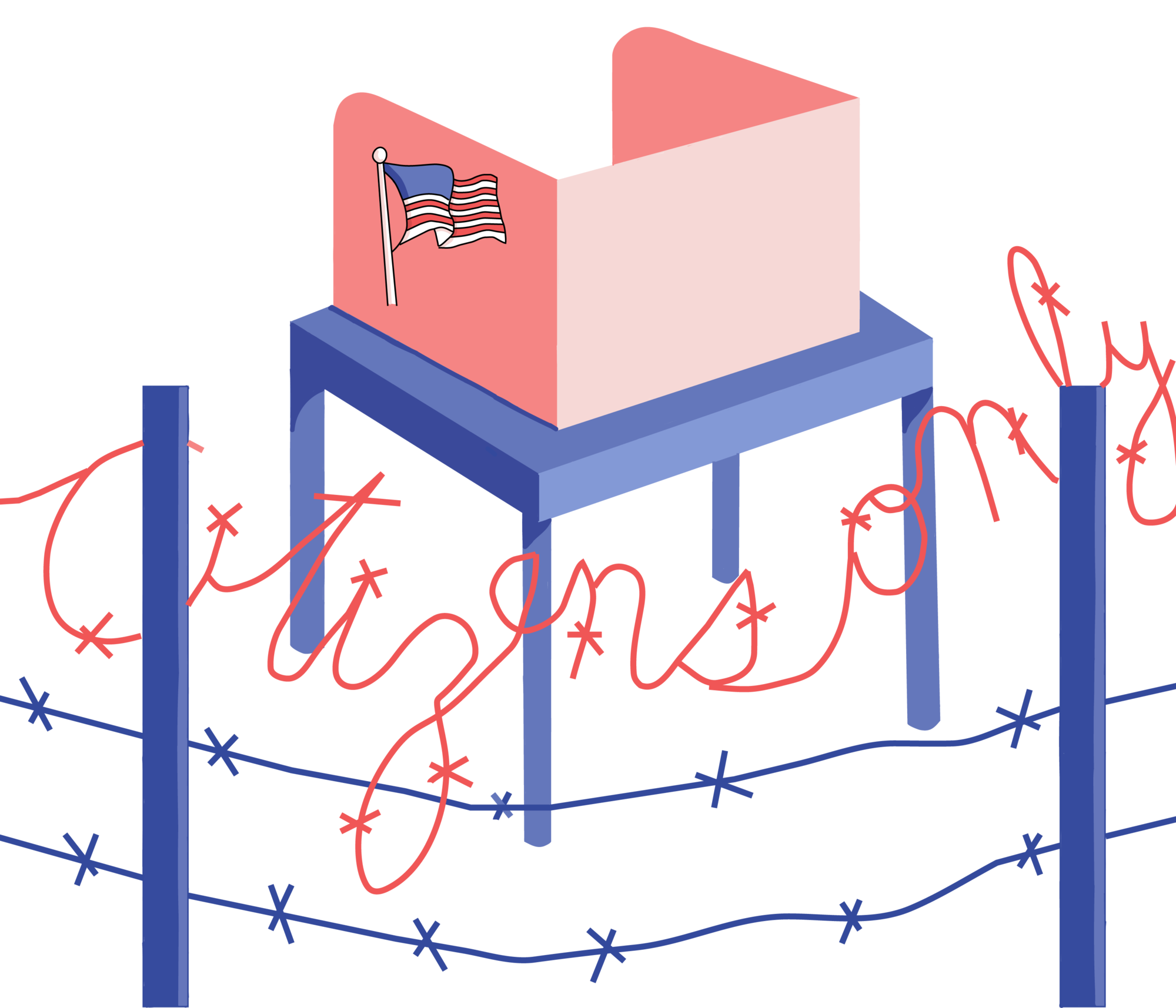 The ongoing pandemic has changed the dynamics of voting, making the electoral process even more daunting for new Americans. Because of the high risk of infection, voters now face the added steps of obtaining absentee ballots and understanding the new legislative actions that their state may have taken. However, for new immigrant American voters, the stakes are even higher. Twenty-three million immigrants will be eligible to vote in this year's election, and various initiatives are being put in place to ensure voter turnout is large among this group. The number of eligible immigrant voters has almost doubled since 2000, reaching a record high. With issues such as growing populations in immigration detention centers and uncertainty surrounding the future of DACA recipients, immigrant voter turnout seems more important than ever. However, making it possible for this sector of the population is rarely straightforward.

To vote legally in the United States, one must be a US citizen who meets residency requirements. Permanent legal residents and any other persons who are non-citizens are unable to vote in most elections, making naturalization an essential pathway for new Americans to gain the constitutional right of casting a ballot. Although some jurisdictions (namely San Francisco) have granted local voting rights to non-citizens, the real fight for national reform of immigration policies starts with the voices of immigrants being heard and represented on the federal ballot on November 3, 2020. Local voting rights are essential for immigrant stakeholders in debates on critical curriculum (the framework of what all children are required to study) within specific counties, the presence of police in public schools, and sustainable power usage. However, federal voting rights are essential to general immigration policies that dictate the personal security of immigrants; the federal government has exclusive rights over the regulation of immigration laws, including who can enter the country and which rights they hold as residents.

The outbreak of COVID-19 has also contributed to major disparities among new American voters, and the pandemic may prevent potential voters from becoming eligible in time for the election. Naturalization ceremonies, which are events where immigrants receive their certificate that allows them to apply for a passport and register to vote, have been cancelled in light of the pandemic. Approximately 150,000 naturalizations have been postponed and none of the ceremonies are guaranteed to be rescheduled. As deadlines for voter registration begin to approach, many immigrants may miss out on voting in this year's federal elections. The lack of urgency surrounding rescheduling or creating virtual alternatives to the naturalization ceremonies have caused accusations of voter suppression and discrimination. According to Joseph Edlow, the deputy director for policy at US Citizenship and Immigration Services, the department “will not ignore federal law, which has clear in-person requirements for naturalization, in the name of convenience or expediency.” This stance may account for the thousands of cancelled ceremonies, but people like Doug Rand, a former immigration policy adviser to the Obama administration, feel Edlow’s comments act as a weak excuse. According to Rand, “there are logistical challenges, but that is not the same as an insurmountable obstacle. The entire country is conducting its business virtually now, at a scale that is unprecedented. . . . For them to say it can’t be done doesn’t pass the laugh test.”

To ensure a large immigrant voter turnout, organizations like the National Partnership of New Americans are working with local communities across the US to engage with newly naturalized voters and make the voting process more accessible to them. These efforts have included broadening the spectrum of languages that election materials are available in, holding voter information sessions in multiple towns, and even providing transportation to these sessions. Some counties have attempted to offer interpretation to voters at the polls. With that said, interpreters must follow a specific set of requirements in some states. If they do not meet such standards, they are blocked from translating for voters at the polls. The requirements may be extensive, such as ensuring that the interpreter has also registered to vote in the vicinity of a voter. In Georgia, it took a settled lawsuit to allow a pair of voters to vote with a translator beside them.

In particular, many immigrants living in the US under DACA have created meaningful organizations, like Operation Dream Act Now and United We Dream, and some even staged sit-ins to speak out against politicians who have denounced DACA. The extensive work and passion has led to new support for the DREAM Act and helped tear down stigmas against undocumented immigrants.

First-generation American voters, in particular, are paving their own way through multifaceted struggle. While learning how to handle various immigration policies, they must deal with the discrimination faced by many American immigrant communities, such as being told that they are not “real Americans” or that they should “go back to insert country of origin.”

Marie*, a first-generation American and first-time voter, told the Indy, “You have to do your research. I have to see if the candidate's actions match up to their words. I keep in touch with others who have done research as well to aid me in the deciding process.” She expanded on her thought process leading up to this year’s elections, stating, “Fortunately, I have never personally felt guilt or discrimination as a new voter or first-generation American voter. I know that my views on politics are solely mine, and if I believe in it, I should be able to stand up for it. It is more so that I feel pressure to choose the “right” candidate.”

Young first-generation Americans seem to share the sentiment of being overwhelmed during this process as they learn to vote for the first time. Ana*, another first-generation American and a recent high school graduate, mentioned to the Indy that she felt rushed during this year's voter registration period, as she prepared to vote for the first time.

Though she hasn’t cast her vote yet, Ana reported already feeling the stigma that “the younger generations don’t know anything and will not take the privilege of voting seriously.” She cited that she simply wanted to live in an America that treats people right, and holds people in office that make good choices for all Americans.

Ana was able to register to vote with the help of an official at the DMV. As she awaits her absentee ballot, she is keeping up-to-date on major news regarding immigration policies and the fight against racial disparities.

Another new American voter who spoke to the Indy, Jess*, did not feel as prepared to vote. She reported wanting to vote this year after finally turning 18, but she has not yet gone through the voter registration process because she’s unsure of where to start. Jess noted that she initially didn’t even know about the registration process. She also felt some guilt because of how little she knew about American politics, and she felt that her limited knowledge came from school, a place where “we barely talked about [politics].”

The logistics of voter registration alone can be very overwhelming, but adding the pressures of being a young, new American in today’s political atmosphere may be enough to turn people away from voting entirely.

Unfortunately, some immigrants won’t receive that choice in 2020. Of nearly 44 million immigrants living in America, approximately 20 million are waiting for their chance to vote, and are still ineligible. Even though 8.9 million residents lawfully have the ability to undergo naturalization, the backlog of applications, as a result of COVID-19 and an unsympathetic Trump administration, has limited potential voter registration.

Ultimately, the inability to vote disproportionately harms immigrant communities; their limited access to basic rights, like healthcare or legislative influence over their children’s education, hinders their electoral power in particular. In addition to inadequete voter representation, a fifth of adult undocumented immigrants live in poverty, according to the Pew Research Center. This combination creates a disheartening dynamic, leaving immigrants unable to influence the systems that they work for. Even after securing voter registration, working-class voters often have a hard time prioritizing voting because of their jobs and families. Making Election Day a federal holiday would benefit immigrant voters immensely.

While facing such disadvantages, immigrants are often criminalized, with many undocumented immigrants detained at borders or immigration detention centers without any prior criminal history. Incarceration is a major factor in voter suppression, as it can render potential voters ineligible before they even begin the voting process. Individuals without citizenship accounted for 64 percent of federal arrests in 2018, making voting more difficult or impossible for some, according to the Bureau of Justice Statistics. Heightened border violence has also negatively altered the perception and experience of immigrants, and the thousands of children separated from their parents as a testament to the abysmal treatment of immigrants in this country. This further emphasizes the disenfranchisement of immigrants in contrast to their supposedly fellow citizens, with only the latter having a real voice in public policy.

All of us have a responsibility to mitigate the effects of discrimination and work toward a more inclusive environment for Americans and soon-to-be Americans. Meaningful change can start with voting and educating those who are new to the process. Providing immigrants with comprehensive information is essential; doing so will improve American political literacy and equip new Americans with the tools to properly exercise their right to self-advocacy.

Protesting voter suppression is another important aspect of improving the American electoral system in the near future. Historically, voter suppression has been used to reduce the influence of minority voters, which in turn impacts immigrant voters, as most immigrants are part of racial minorities. For example, gerrymandering schemes, which often involve diminishing minority voters to very few districts to dilute their votes, continue to occur in cities like Detroit and Atlanta. Increasing the awareness of schemes like these can help protect minority voters from strategies created to silence their political voice.

Immigration will likely serve as a critical talking point in the 2020 election. As the unfathomable reality of kids detained at borders persists, people continue to protest systems that profit off of immigrant detainment. Given that a large portion of Trump’s political stances are anti-immigrant, voting in this year’s federal election remains of utmost importance for new American voters.

As a Black first-generation American voter, I am undergoing the process of voting for the first time myself. I think about my future as an American often, and I am working towards educating myself on the major policies that candidates are standing behind. I’m excited to enter my first year of college as a student and a voter, and I hope to continue to fight against discrimination while advocating for better immigration policies.

AICHA SAMA B‘24 will wear her “I Voted” sticker proudly.

*Names have been changed to preserve the privacy and security of the interviewee.