Reading ancestors into being 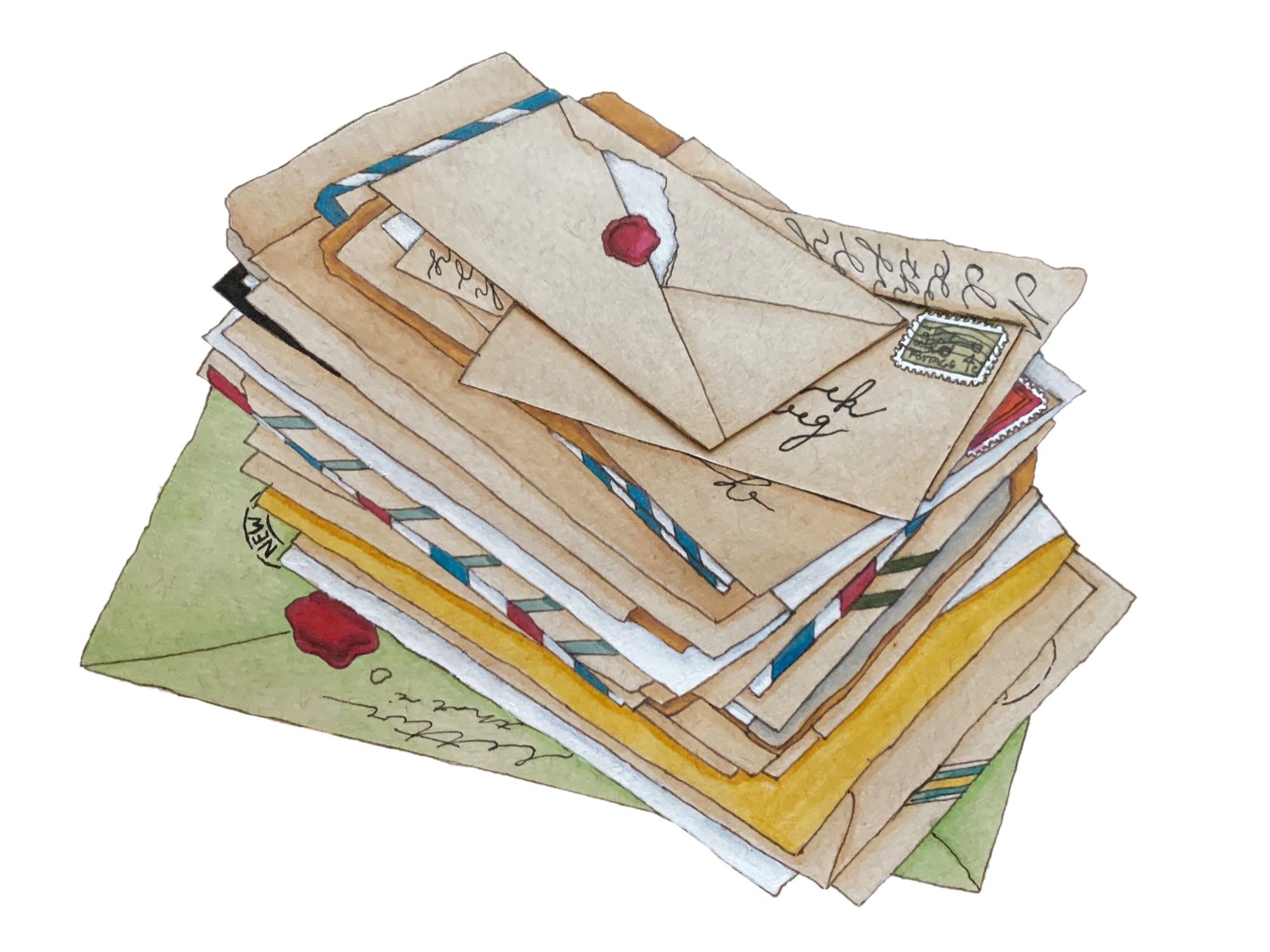 I know my great-great-great-great grandmother’s handwriting well. The stroke of her t comes after the vertical without crossing, leading the eye to her next letter. Her underline emphasizes the middle of her words, as if some secret message were nestled inside “gladly.” Her H is a pair of loops knit together at the center, with curly tails at either end. The people she loves are “dear,” usually “dear dear.”

Eleanor loved dear dear George, and long after they married and had children and she died, and he remarried and lost his eyesight and lost his second wife and died, my grandmother found Eleanor’s letters in a heavy wood box (with George’s initials carved into the top) in some tucked-away corner of her house.

George left Hinsdale, in western New York, in 1862 to join the Marines at the Brooklyn Navy Yard. The letters Eleanor wrote him are, I guess, ‘Civil War letters,’ but they’re nothing like the ones Ken Burns self-seriously inserts into his documentaries: panning over some regiment photograph; “Dearest Abigail, the winter here is harsh. Not as harsh as last year’s, but harsher than the year’s before. Lee and his men are not far behind us now. Pray for me that I might live, or else die for this Union.” I don’t know if Eleanor kept his letters, but George preserved hers. Her one-sided love letters are full of longing and everyday pleasures and pains. She often wrote that she was afraid that she would never get a response, that a letter or a life would be lost along the way. I don’t want the other side, though. I’m content keeping just Eleanor in focus and letting scenes of the war blur at the periphery.

The paper on which Eleanor wrote is brittle and browning, and the letters now sit safely under Nana’s couch in an archival-grade paper box designed for storing antique baseball cards. Sometimes I worry that if there were another storm like Sandy (we listened to the crank radio in the dark and headed to Nana’s in the morning to spend the week), her floors would flood and wash the letters away. Even as I set about cataloguing, scanning, and transcribing them, I had visions of pages disintegrating in my hands and ink erased by the scanner’s laser. The more I handled the letters to preserve them in a family archive, the more I convinced myself that my work was urgent.

Eleanor was my grandmother’s grandmother’s grandmother. It’s hard for me to comprehend the distant closeness of our relationship. In terms of genealogy, I am as related to her as I am to 63 other people. Other than George, I know none of those 63 names, and I’ll never read their letters. Most of them lived their lives far from Hinsdale, in shtetls in the Pale of Settlement and the Austro-Hungarian Empire. I can hardly know what made up their lives. Someday my brother and I will get around to asking the FBI if our great-grandparents really were communists, but if we found a trunk of their subversive letters tomorrow, I wouldn’t even be able to read them. I want to learn Yiddish to hear the voices of my ancestors. But what if I can’t find them? Words and stories fade over centuries, until they are barely a whisper (Oma’s parents switch from Yiddish to Russian so they can speak privately at the dinner table, but little do they know she’s learned their language too), until they are lost.

I found Eleanor—or, Nana did. As did Nana’s grandmother, Blanche, 70 years ago, when she collected the letters and annotated their envelopes. Perhaps I am the most recent generation in a lineage of archivists: Eleanor, the memoirist; George, the collector and protector; Blanche, the cataloguer; Nana, the preserver; and me, the digitizer. Yet I am also, no doubt, an analyst—I combed the letters, looking for a grain to read against. I wanted revelations that would rouse and scandalize the rest of the family: coded subversive sexuality, radical abolitionism, rebellious feminist theorizing! I think I wanted to find these hidden threads of a lost family history less to take pride in their existence than to have been the one to discover them. I wanted to read stories below the surface, ones that no one had ever tried or been able to decipher—to connect with the true substance of Eleanor’s life that undoubtedly could be unveiled with the proper reading.

When I read the letters now, I wonder what Blanche made of them in the ’50s. Blanche was born in 1888, nearly a decade after Eleanor died at only 37. Was it painful to read the letters, to meet the grandmother she never knew? Maybe she allowed herself to get caught up in the drama—Dewitt my dear brother was killed the 14th;

Soon we shall meet never never to part, and should fortune frown, or adversity come, we shall still possess that mutual love which will bind us together, and we will defy the whole world to sever those silken cords;

I never shall get over it till I can ask your forgiveness with my own life and hear your answer with my own ears, for I feel so unworthy, as though I do not deserve to be forgiven. Oh! I don’t want to have my own wild way and do everything as I please—and imagined she had nothing to do with these George and Eleanor characters. Or perhaps, like me, she searched her family history to unearth buried lore, but instead discovered Eleanor’s writing.

I’m jealous that Eleanor is a better poet than I am. Her farewells sing of love and loss, with every moment of parting touched by the divine:

Good bye God be with you ever. We are in the hands of One who sees the Sparrows fall—let us trust in Him that we may sometime meet again. Eleanor

One night, exhausted, she begins to run out of space on the page and heads to bed:

If you ever get this

write very soon. If any

one else does, I wish they would let me know where you are.

When she welcomes a vision, her words are warm and light, a promise and a prayer:

I don’t know how much of myself I should see in Eleanor. (Google Images shows me that Eleanor’s daughter Ellen looks strikingly similar to my mother Ellen.) It can be so easy to fall into that old, territorial feeling—these letters are mine, only I can interpret them. I should keep my distance. But I have known that longing, too. I want to make sunshine in our home, too. I have felt (that I have felt) ties to people and places and sounds that death itself (Opa had Swiss citizenship, so his family could escape Vienna) cannot sever.

I wonder if I found my great-grandmother Sylvia’s letters, if I would pour over the intricacies of the lines of her Yiddish characters. The things I might learn from words I can’t read! The Eleanor that I know—that I really really know—is mine all mine. I have read her into being. I recently learned that my fourth cousin once removed is selling edited versions of George’s military diary for 22.50 plus shipping. I don’t need to know his Eleanor. I don’t mean to be precious; she is not mine to hold on to. But there is a part of me that is her, a part of her that is me. One day, I will probably forget that part of me, and it will grow quiet and fade away. But now it is bells and birds and singing.

BEN BIENSTOCK B’20 is looking for paid work (including a competitive benefits package) transcribing your ancestors’ secret romance novels.