Advanced academics and the pipeline to Classical 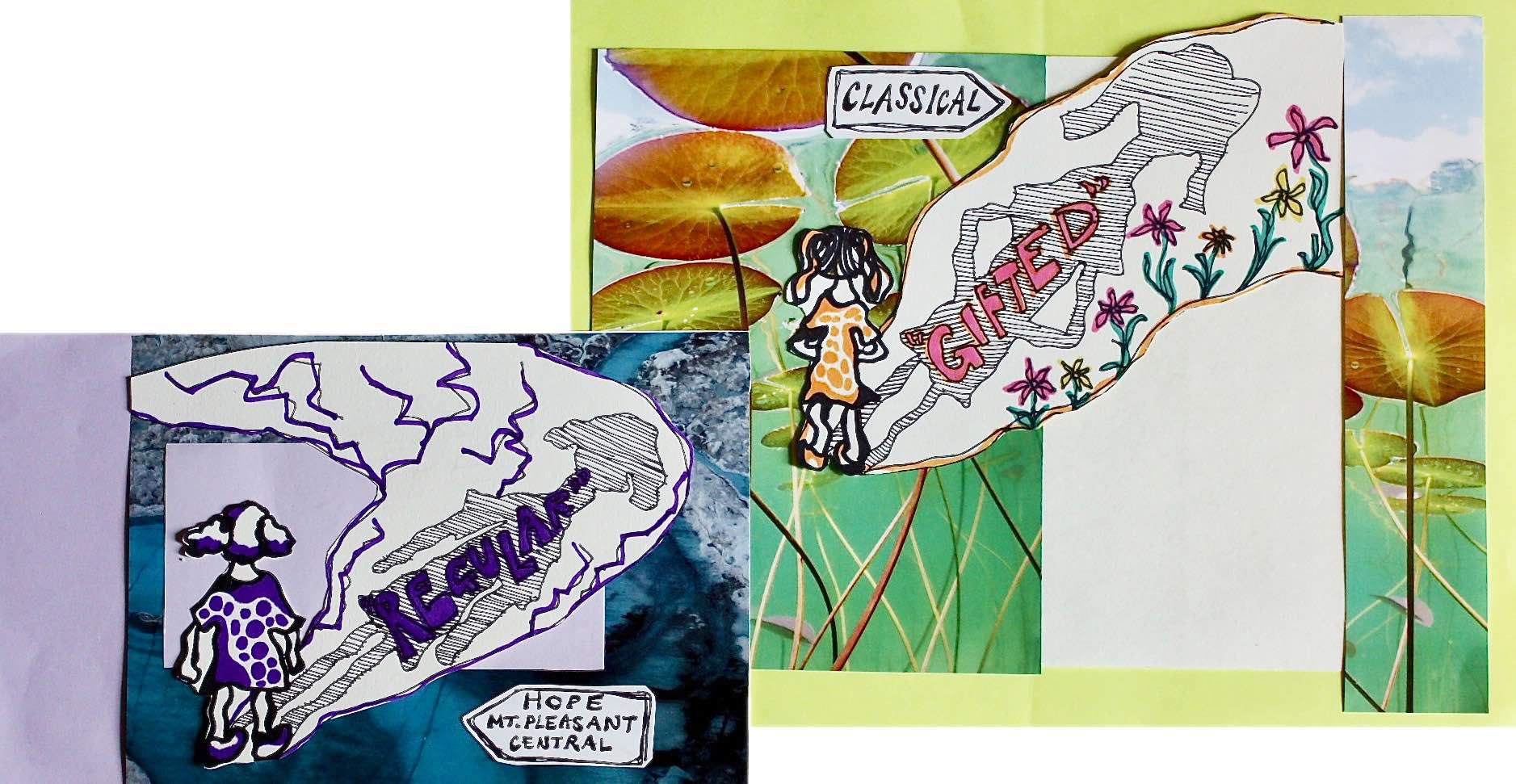 An increasingly broad body of social science research demonstrates that educational tracking—the separation of students by evaluated academic ability—disproportionately disadvantages low-income students and students of color. In her seminal book Keeping Track, Dr. Jeannie Oakes reports that “poor and minority students are most likely to be placed at the lowest levels of the school’s sorting system.” Education expert Beth Hatt connects tracking to re-segregation: Black students are overrepresented in “low ability” classes as early as preschool, and Black and Latinx students “are only half as likely as white students to be placed in a class for the gifted even though they may be equally gifted.”

Within the Providence Public School District (PPSD), which is 91 percent students of color, the high-ranking test-in magnet Classical High School is disproportionately white. White students comprise 25 percent of its student body—more than any other PPSD high school. Mount Pleasant’s, Hope’s, and Central’s student bodies are six, five, and four percent white, respectively. Classical thus has, proportionately, about three times as many white students as the overall district, and around five times as many white students as Hope, Mount Pleasant, or Central.

Tracking in the PPSD begins much earlier, however, with a fifth grade standardized test of reading, writing, and math skills used to stratify students into different class levels, or tracks. Fifth graders who score at or above the 85th  percentile and/or who obtain a proficiency with distinction score in any subcategory on the New England Common Assessment Program (NECAP) “pre-qualify” for a middle school Advanced Academic Program and receive application packets. Those who score similarly on the SAT-10, another standardized test, are also invited to apply. All others are not.

It was the fifth-grade NECAP, along with the required application, report card records, teacher recommendation, and parent nomination, that placed Heather Argueta on the ‘gifted’—later renamed the ‘Advanced Academic’—track at Nathanael Greene, one of three PPSD middle schools that offers an accelerated program.

Ability grouping was first introduced officially in the 1890s by the then-president of Harvard as a way of making teaching more effective. Defenders of tracking similarly uphold class separation as efficient for teachers and more rewarding for high-achieving students. However, in their book on the inequalities driving the achievement gap called Despite the Best Intentions, sociologists Amanda E. Lewis and John B. Diamond cite significant research over the last 30 years that suggests high-achieving students in accelerated programs benefit not from classroom separation, but rather from the extra resources (like the after-school programs and ‘stable’ faculty in Greene’s AA Program) they receive once categorized as ‘advanced.’ Different educational opportunities between tracks contribute both to ‘advanced’ students’ success and to a widening achievement gap. Lewis and Diamond note, “The achievement differences between those in high and low tracks grows over time no matter where students begin in terms of test scores.”

There is ample basis to question the equity of standardized test scores. As journalist Mariana Viera put so eloquently, “When we accept the myth that these tests are merit-based, we also accept the idea that race and class gaps in standardized-test results...are due to individual and group shortcomings, not structural ones.” Not all students share the same chances to score well, given the disparities in access to resources, support, and structure both inside and outside of school. Wealthier students have access to test prep and tutoring that others do not. Standardized tests are also often designed with white test-takers in mind. From elementary school to the SAT, standardized exams have been criticized for pervasive racial and socio-economic biases.

The brochure for the Advanced Academic Program at Greene Middle School advertises that “upwards of 75 percent of its students” are accepted to Classical High School each year, comprising “a large percentage of the Freshman class” at the test-in public magnet. The flyer—designed for ten-year-olds and their families—highlights the prestigious colleges attended by alumni almost a decade after their acceptances to AA: Brown, Harvard, Tufts, and more.

After having been classified as ‘gifted’ and studying for three years in advanced classes at Greene, Heather Argueta applied and was accepted to Classical. While an exceptionally hardworking student, Argueta also exemplifies the snowball effect of tracking. Students tracked into ‘gifted’ programs for sixth grade are more likely to receive increased academic attention and opportunities, facilitating their entry into Classical and, later, top colleges.

Argueta’s curriculum in middle school better prepared her for Classical’s entrance exam than a ‘regular’ course load would have. The dozens of Advanced Placement (AP) and honors courses offered at Classical exposed her to the rigorous academics of the colleges listed on Greene’s AA Program flyer. At Classical, Argueta was able to take AP classes in history, biology, English, Italian, calculus, and environmental science. She was also on the debate team, performed theater, and played violin.

Argueta knows she was tracked for success. “The classifications separated us,” she told the Independent. “Kids placed in the ‘gifted’ program were more the ones who applied and got into Classical, and those placed on the ‘regular’ track were more likely to go to Hope, Mount Pleasant, Central.” As Argueta explained, students’ middle school classes, high school experiences, and chances at college were shaped by standardized tests taken at ten years old.

The Rhode Island Department of Education’s (RIDE) data on the PPSD suggests that Classical students receive a higher quality education than their peers at every other Providence high school. RIDE’s ratings are based on ELA and math achievement and growth, proficiency in English, graduation rate, absenteeism and suspension, postsecondary success, and number of subgroups of “critical communities” that are performing below level. Subgroups include racial/ethnic groups, students with disabilities, English language learners, and low-income students. The Department’s Technical Report explains that a school’s rating is drawn from its lowest categorical score.

Classical was one of only two PPSD high schools that dodged a brutal one-star out of five ranking—which “identified [schools] for comprehensive support and improvement”—from RIDE in 2018-19. The other, E-Cubed Academy, a small school offering Summit learning, which includes personal learning plans, received two stars. Classical received five stars out of five.

The prevalence of APs at Classical suggests a higher quality of teaching and support at the expense of other students. Stanford researchers detail a trend of more experienced teachers being assigned to advanced classes, while their less experienced peers are assigned to “lower-achieving” students.

Students at Hope, Central, and Mount Pleasant, like all students, deserve the very best education—one that prepares them for top colleges if that’s what they seek to pursue. As I sat in Hope guidance counselor Lynn Harrigan’s office in December, a senior strolled in to ask about the College Board portal. Harrigan beamed and proudly introduced him as one of her best students, explaining how he made it to the top of his class after immigrating from Cape Verde without his parents and learning English. “If [students] can make it through that, they can make it through Brown,” Harrigan says. “They have so much fortitude. That shows so much more than test scores.”

Yet, while Classical has averaged three to five acceptances to Brown each year for the past ten years according to Louis Toro, the Director of Guidance at Classical, it’s been over a decade since a Hope student has been admitted to Brown. Lynn Harrigan shuffles through a crate of yearbooks in her office to verify—the last Hope student admitted to Brown was Ana Almeida, in 2008. Mount Pleasant hasn’t seen a student accepted since 2003, according to guidance counselor Melissa Lipa.

BY THE NUMBERS: Comparing the PPSD’s Four Largest High Schools

Heather Argueta graduated from Classical in 2016 and was admitted to Brown. She expects to receive her Bachelor’s degree in Health and Human Biology this May. Where would she be had she not aced the NECAP? If she had gone to Hope? All students deserve the same access and opportunities, yet most in the PPSD are told in fifth grade that they are not ‘gifted’—that they, like their classes, are ‘regular.’ They are tracked into support classes, then deprived of the resources and college-access opportunities reserved for their ‘gifted’ peers.

Advanced academics that encourage achievement and enhance educational opportunities should be universal. A National Education Policy Center report states that when enriched curriculum is accessible to all, both high and low achieving students benefit. As long as spaces in these programs are limited, however, we must critically analyze the bases for admission and the role of tracking in reinforcing racial and economic inequality.

MARA CAVALLARO B‘22 wants to be a teacher but doesn’t like apples.