Get it in Writing

Maximalist Journaling in Crisis and Calmness 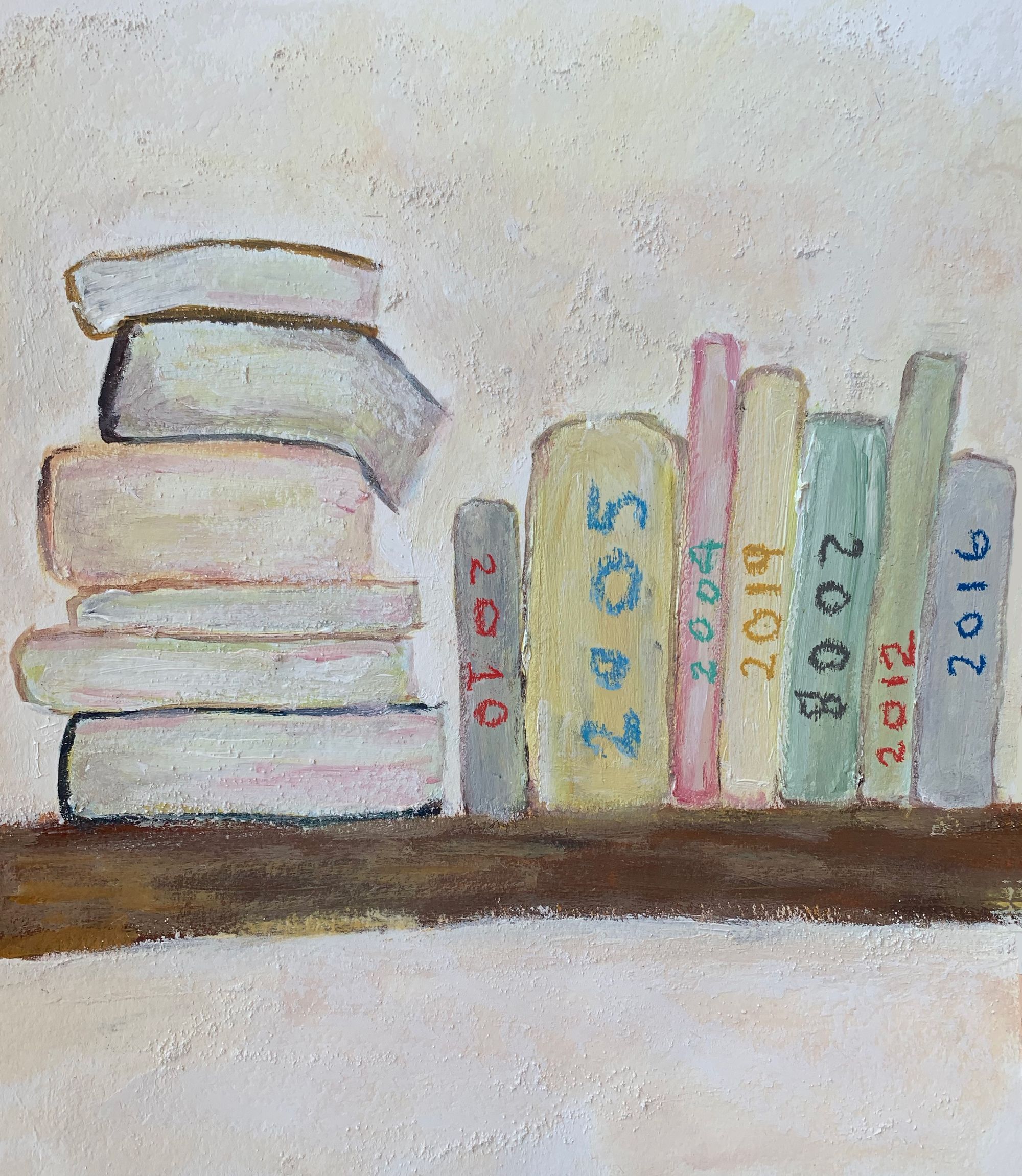 If someone you are about to date for a long time mentions that they have previously read their ex’s diary, that may be the only red flag that you will ever need.

At home and stationary in quarantine, I cleaned out my bedroom desk, an accumulation of over a decade of childhood and adolescence. Organization has never been my strongest suit. I found stickers and uncapped markers and love letters from my high school boyfriend and tiny bottles of alcohol I hid to throw away later.

I also found the stash of old journals that I have been writing as letters to my future self since age five.

Dear Journal, they begin in the early periods.

I lost my first tooth today :) Mommy was washing my face for school and there it was! I cried. I got a star sticker on the chart (graph). This is really short!

As I grew up, my daily diary became unrestrained and unlined. Instead of inscribing my life in summaries, I would pick a random page, turn it sideways, and write “poetry.” As the year went by, my journal would become full and cramped, with poems and paragraphs and ephemera scrawled on or glued to each page. Reading my diary from sophomore year of high school is so visceral now, because I was writing with such truth and spontaneity that it conveys exactly what it was like to be 15 in the way that I was 15 then.

These snippets form a collection of what it means to be me at each moment in my life.

I wrote down everything I wanted to remember, ever. (This is a tendency I’ve never lost.) Lists of my best friends and songs I liked at the time. Everyone I had ever kissed, in chronological order. Compliments that I valued. Secrets I was keeping. Books and movies to read. Jokes to tell and retell. Everything gets written down.

I’m not actually a forgetful person. In general, my memory serves me well. Yet something about humankind’s inability to remember everything unsettles me. Growing up and experiencing more of life, especially the good of it, fills me with an anxiety that I will forget even just one thing that has happened to me.

So my journals fill up quickly—rendering them maximalist in their inclusion of detail and minutia.

This is partially a preventative measure. If you keep meticulous-enough documentation of your actions, of your transgressions and their consequences, rarely will you make the same mistake twice.

I have forgotten a lot of what it was actually like to date the person I dated freshman year of college. The day-to-day details that I left out of my journals are missing.

During my healing process, I wished I had kept more accurate notes about everything that happened to me so that when therapists characterized the relationship as abusive I could have empirical evidence to prove to myself that it was.

I found it so unbelievable that something like that could happen to me. Naturally, I wanted proof that I had been manipulated so severely.

Part of healing after a relationship like this is forgetting. It is about erasing all the evidence: deleting texts, screenshots, photos. It is about letting moments, especially the good ones, fade away with time, both in detail and intensity. Certain streets in Providence and New York City used drip with so much memory that it was physically uncomfortable to walk them alone. It is about taking the time to rewalk them and rewrite them.

The other part of healing is remembering—remembering all the steps throughout the relationship that foreshadowed its demise and downfall. And the journal is great for this.

When I break up with someone, I create a list of 50 reasons why I hate them. Ranging from things so petty they should never leave the page (picky eater, ugly crier) to deal-breakers that leave me kicking myself (hates women), the list serves as an explicit reminder.

I am not sure what to do about the Y situation, is a sentence I wrote in my journal more than once that summer. Endlessly equivocating, I explained away the harm by writing down three sentences of justification for each sentence describing manipulation. Now, I literally could take a red pen and circle the flags.

This summer I was heading to work on the J train in New York City and received a call from my best friend in Los Angeles. I was alarmed—it was before 6am on the West Coast—so I answered immediately.

Sobbing, she choked out a story about meeting up with her ex. The encounter quickly turned sour and toxic. Her ex tried to manipulate her by lying about what had happened moments later, accusing my friend of harm she knew she definitely didn’t do. My friend was terrified—worried about this thing she knew didn’t happen.

I told her to do the thing I would do in this situation: write down exactly what you just told me so that you know what is true.

A diary, in this way, can be great protection against gaslighting. Keeping a written record of contracts and incidents is always a good idea; get it in writing is too often a lesson learned late. But recording what happened is equally important for remembering what is true for yourself.

Despite my tendency to attract chaos, nothing I’ve lived through is particularly memoir-worthy. Instead, writing down my life has been largely a private and therapeutic endeavor. I use it to process, reflect, and remember.

Journaling is often high on lists of self-care practices. The journal is a nonjudgmental confidant. In times of crisis, I find myself writing in it more.

This is, without a doubt, one of the first times where my everyday life has suddenly become extraordinary and decidedly historical. No one except us has lived during a time of national quarantine in contemporary America—which is crazy! With the situations that govern us right now—statistics, regulations, and quarantines—changing on a daily basis, it can be hard to keep up. Creating an accurate documentation and asserting one’s own truth in the midst of all this can be a way to get a handle on it all.

Sometimes the absolute truth can be just too much to pen down though, when the weight of one’s world is difficult to synthesize. When it feels this way, I assert that random collecting can be just as worthwhile and rewarding. It also can be easier to write down your daily schedule in bullet points, rant about how terrible the Tiger King and I episode was, or make a list of things to cook with the strange assortment of food in your fridge. This type of journaling is still an accurate and relevant documentation of life right now. Be gentle with yourself and let the details of the everyday pain and truth work their way in when they can.

It is difficult to imagine what will be eventually said about this period. Even so, writing it all down a journal is the first, unfiltered step towards being able to see some meaning or pattern. In a world situation where it can feel hopeless to work towards such uncertain ends, writing about life now is a commitment to our future selves.

All of it feels so important and historical—so err on the side of including everything. This type of record-keeping can ground us in the present. It is useful for writers and non-writers, forgetters and rememberers. With this in mind, I write more furiously and screenshot every Zoom call I am on. It is easy to sleep or binge-watch away each day, but I try to promise my future self good material, both for writing and for reflection, by paying sharp attention now.

AMELIA ANTHONY B’22 sleeps with her journal next to her pillow.