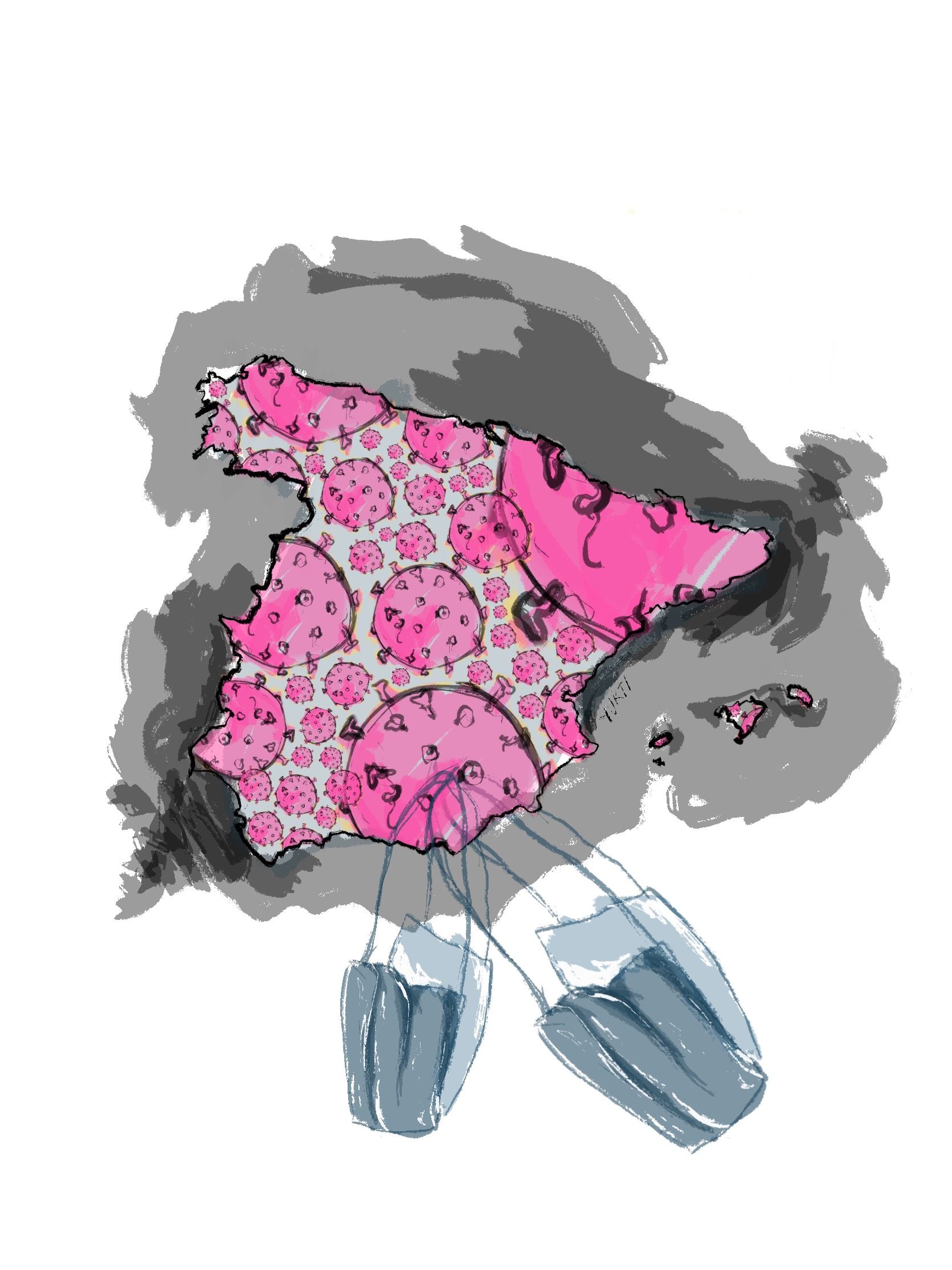 I landed in Spain on March 3, the same day health officials reported the country’s first death from the coronavirus. At that point, 114 cases had been confirmed there. Less than two weeks later, I returned home to New York, a day after the Spanish government declared a state of emergency and 7,753 cases had been confirmed. Of course, in retrospect—with lockdown as the new normal—it’s easy to say that I should have seen what was coming. However, the Spanish government, the people around me, and I all refused the reality of the pandemic until it was inescapable.

I was traveling during a semester off, and had planned to stay in Spain for about two months. I would spend a few days in Madrid, a weekend in Granada, and then I would volunteer on a farm in Andalusia for three weeks. From there, I would figure it out.

Madrid felt remarkably lived-in and relaxed, which I loved. During the day, the plazas and cafes were crowded with groups sitting and drinking; at night, people thronged in the bars, restaurants, and streets. Museums were filled with tourists and children on school trips. As the number of confirmed cases in Spain rose (a significant percentage of which were in Madrid), I barely paid attention. Nothing around me seemed to have changed. I figured that it would only make me anxious to follow the country’s prognosis closely—it felt like there was nothing I could do.

On Monday, I left for the farm where I would be volunteering, and where I would have neither cell phone service nor WiFi access. By then, 1,231 cases and 30 deaths had been confirmed. I spent the next four days in blissful ignorance—making cheese, building a greenhouse, watching sunsets over the Sierra Nevada—as the world began to shut down around me. I heard tidbits from the other Spanish volunteers about their families, but I was unaware when President Trump announced the ban on travel from Europe that Wednesday, and still in the dark on Thursday as the Spanish government closed museums and restricted public gatherings (the country’s first significant measures to address the spread of the virus).

On Friday morning, when I was able to connect to a WiFi hotspot, I opened my phone to a barrage of messages from the last few days asking what I was going to do, and when I was coming home. “got that flight yet??” a friend studying abroad in Barcelona had texted me two days earlier. Before I had even read the news, I told her to call me, but she responded, “i’m on the plane.”

After an initial panic, I returned to Granada that day to consider my options somewhere with more stable WiFi. I was probably safest on the farm, where I had little contact with the outside world, and I figured that as a U.S. citizen in a European country, there would always be a way for me to get home. If I went home, I would be returning to quarantine in New York City, which was rapidly shutting down and bracing for the worst to come.

Someone I worked with suggested that after leaving the farm, I should find a place on the Costa del Sol—Spain’s beachy southern coast—and stay. “Why not just sit it out here and enjoy the pandemic?” It was a very tempting fantasy. (I met some people in my hostel in Granada that weekend who, despite the circumstances, had just arrived and were planning to vacation as usual. I wonder what happened to them.) I am both optimistic and deterministic about my life: I believe that things generally work out in some way and ought to be that way for some reason. If I had any gut feeling then, it was to put this conviction to the test and resist both the homing instinct and the hysteria, weathering what would come on my own.

But when I arrived in Granada, I realized how much had changed in four days. On a Friday night, the streets were empty, most bars and restaurants were closed, and from the conversations I eavesdropped on, the virus was all people were talking about. Newspapers reported Spain was just a few days behind Italy; this was the first time I saw it and believed it. I wondered what could change overnight—how much advance notice was needed to impose a Milan-style lockdown? How committed were the Schengen countries to open borders, really? The realm of what was possible seemed to have exploded, and with the deluge of news from Italy, the US, and the rest of the EU, it felt impossible to keep track of what was fact and what was projection. It was evident to me that, whatever happened, any degree of normal travel was no longer viable; as calm and capable as I told myself I could be, it felt more foolish than intrepid to resist the trajectory of the world around me.

I booked a flight out of Lisbon for Sunday morning because I heard a rumor that the Madrid airport was going to shut down and I didn’t want to take the risk. (I would have been fine.) When I tried to take an overnight bus from Sevilla to Lisbon, I had to argue with the driver to let me on: he was convinced that the Spanish border had already closed, and only Portuguese citizens would be allowed to cross. (Nothing happened.) From Lisbon, my journey was eerily smooth. The airport was crowded and operating as usual. When I landed in Newark, after a brief health questionnaire and the scan of a forehead thermometer, I was cleared to pass through the shortest customs line I have ever waited in.

The number of coronavirus cases in New York has now surpassed that in all of Spain—the governments of both regions, which have the highest numbers of cases worldwide, are facing the consequences of their prolonged inaction. Both comprehended the crisis at the same pace as their citizens, despite months of forewarnings, watching the pandemic unfold outside of their respective borders but refusing to grasp that it had already arrived at home.

I have been sheltering-in-place in Brooklyn for just over a month now. Meanwhile, a friend from the farm told me that he and the other European volunteers just left last week, as it was becoming increasingly difficult to travel by bus within Spain. I could have flown to New York from Madrid any day this week, as long as I was able to get to the airport.