From Italy to New York 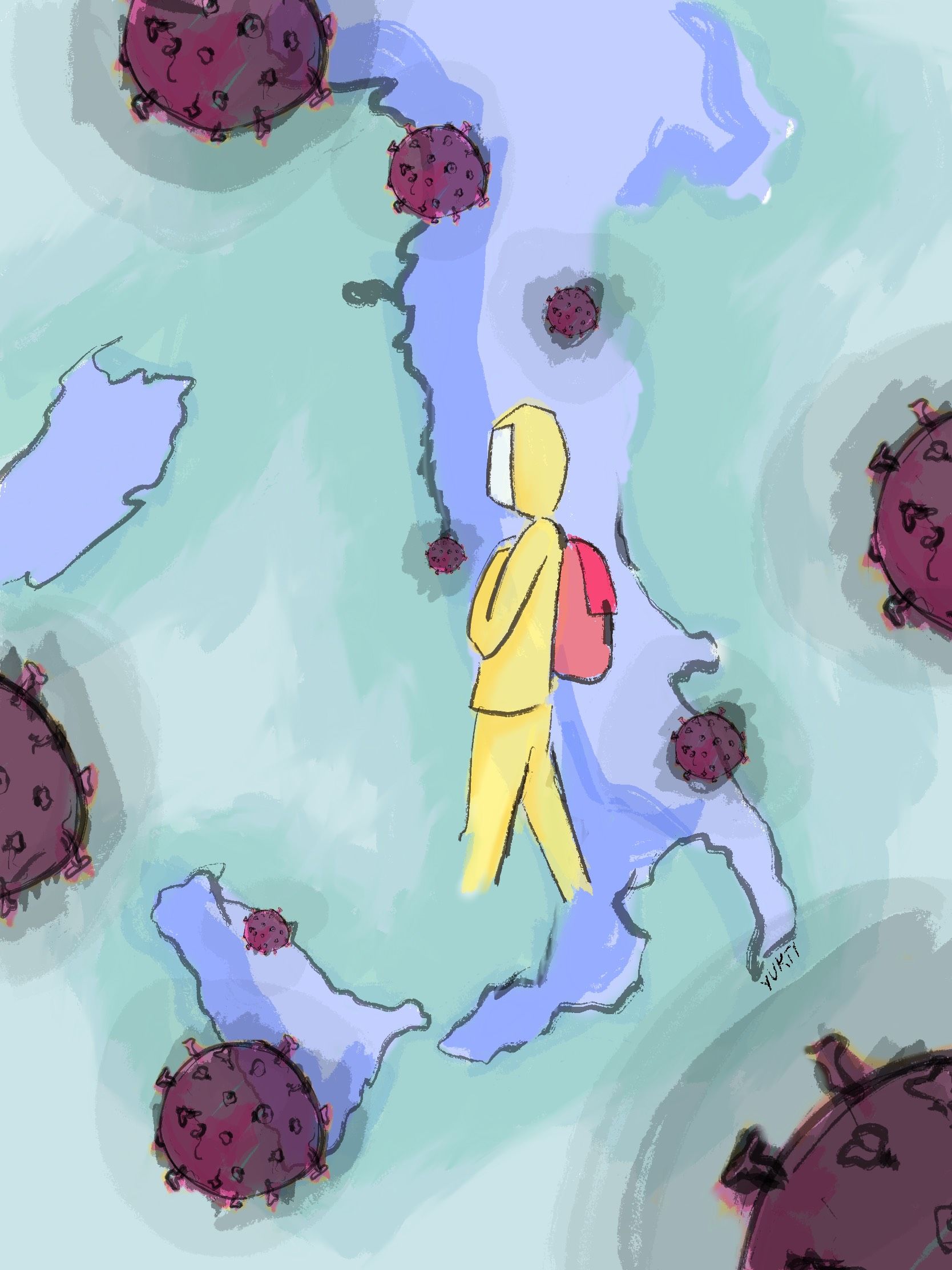 The first six weeks I spent in Bologna were nothing short of a dream: I was studying abroad in the culinary capital of Italy, riding on the back of Vespas like Lizzie McGuire, and wandering the city’s portico-covered streets. Eight years of learning Italian and a long-held desire to understand the country of my mother’s childhood stories had led me there. During my last two weeks in Italy, despite the fact that study abroad programs across the country were closing due to the coronavirus, I felt safe. At the time, there were zero cases in Bologna and conversations about the virus, on both interpersonal and governmental levels, made the health crisis out to be more of a disruption to daily life than a threat to well-being. I could have never imagined that in two week’s time, I would be back on Long Island, sitting in my childhood bedroom under self-quarantine.

On February 23, I was notified by the University of Bologna that all academic activities would be canceled for the week. Though outbreaks had begun in Italy, the closest was located in the northern region of Lombardy, which is about a two-hour drive from Bologna. The closing of Bologna’s schools, museums, and libraries seemed like a necessary precaution to prevent any spread.

Initially, there appeared to be some panic among the residents in my neighborhood. When I went to my local grocery store the next day, I stepped into the aftermath of a post-apocalyptic raid. The clunky green produce bins at the store’s entrance were empty, the pasta aisle was wiped clean, and a large piece of metal from a refrigerator vent was lying broken on the floor. But after a day or two, the store was quickly restocked and the fear seemed to have subsided.

On February 27, Nicola Zingaretti, the leader of the Italian Democratic Party, posted an Instagram photo of himself raising a glass of traditional Italian spritz, surrounded by a group of people for “an aperitivo in Milan.” In the caption, he encouraged Italians to “not change our habits.” He continued, writing “our economy is stronger than fear. Let’s go out to drink an ‘aperitivo’, a coffee, or eat a pizza.” That same day, ABC News reported that Luigi Di Maio, Italy’s foreign minister, blamed overblown media coverage for the tanking of the nation’s tourism. “In Italy, we went from the risk of an epidemic to an ‘info-demic’of confirmed disinformation,” Di Maio said, “which at this moment is hitting our flow of tourists, our business and our whole economic system.”

As politicians urged residents to continue their lives as usual, I picnicked in the grassy Giardini Margherita, surrounded by tightrope walkers, musicians, and families. Crowds still formed around bus stops and people still packed themselves into bars. With time off from classes, my roommates and I went to Barcelona for the weekend, but the trip was more of a vacation than an escape.

The following day, Brown University sent an email to students of the Bologna program stating that the university did not recommend the program’s cancellation. We were given the option to go back to the United States, but the majority of us had no intention of leaving voluntarily.  I did have some friends, however, who expressed heightened concern about staying due to chronic medical conditions. By giving us the option to stay, Brown reinforced the idea that Bologna was safe. “The situation’s just getting better, so this is an email for the people who are really afraid and just want to go back,” said Lucas Sanchez, a Brown student from the program.

After reading the email, those still in Bologna responded to the news by heading to bars while my roommates and I popped celebratory champagne and danced around our hotel room. The confidence we felt was quickly shattered. An hour into our celebrations, I was alerted by an email from the U.S. Embassy that travel warnings for Italy were increased to a Level 3: Reconsider Travel, due to a recent outbreak of COVID-19.

Once I saw the updated travel advisory, I knew the program was over. There was a rumor among the students that a Level 3 warning would mean the need to start packing our bags. I grieved the loss of an experience I had been dreaming about for years, unaware of the intensity of the wide-scale grief to come in the following weeks. My roommates tried to calm me down, worried about the hotel's thin walls as I sobbed on the bathroom floor. The next few hours I sat huddled with my roommates on the bed, anxiously waiting as universities began to individually pluck their students out of our study abroad program and wondering when we’d be next. At 2:36 AM, four hours after I received the first email that said we could stay, Brown sent a second email that suspended the program. I was able to return to Bologna one last time before heading home to New York.

When I arrived in Bologna, I expected to feel a dramatic shift. A man in a neon red suit and mask checked my temperature at the airport, which made me feel both anxious and safe as it was an indication that officials were trying to keep the virus from entering the city. At the same time, some tourist attractions, like Le Due Torrí— Bologna’s famous towers that offer picturesque views of the city—were beginning to open up again. To address the fear of the coronavirus and incentivize people to continue going out, the municipality of Bologna decided to offer free “culture cards,” which gave discounts to museums, events, and movies throughout the city. Matteo Lepore, the Deputy Mayor of Bologna explained that the cards meant to “help with the culture sector after the forced stop.” On March 1, it was reported that over 10,000 people filled the streets, waiting in line to receive this discount card. On this day, Italy had a total of 1,694 cases of coronavirus and 34 deaths. I discussed the initiative over lunch with Martina, a friend who lives close to Bologna. She was excited for cultural events to reopen again, but disappointed that I wouldn’t be there to experience them.

Based on the relaxed attitudes of politicians and my Italian friends, it seemed like the situation in the city was starting to get better just as I was leaving. I realize now how irresponsible the hopeful promotion was, as it prioritized a sector of industry over the health of thousands who waited in line to collect the card and attended events across the city. A little over a week later, those living in Italy were ordered to stay in their apartments indefinitely unless given special permission or buying groceries.

By the time I was flying back to the US, the UN health agency had already urged all countries to act against the rapid spread of the virus after a dramatic surge in new cases. When I arrived in New York, I noticed that the safety procedures were lagging behind Italy’s policies. Unlike the masked Red Cross worker that took my temperature in Italy, the officials that greeted me at JFK didn’t wear the same protective gear and didn’t check to see if I was ill. I told them that I was coming from Northern Italy, but there was no conversation about recommended quarantine or self-isolation. Sixteen other students from my program confirmed with me that they had not been checked as they entered various airports across the country nor were their airport officials wearing masks. Had I not seen the Centers for Disease Control and Prevention guidelines or Brown’s email advising me to quarantine, I probably wouldn’t have known what to do. Though I followed procedure and self-quarantined for 14 days, the lack of intervention at the airport seemed to trivialize the severity of the situation.

Rapidly changing situations and a lack of clarity were not exclusive to my experience in Italy. Misinformation and a delayed US response to the crisis made it difficult to know what to believe or how seriously to act. I saw pictures of friends hosting large gatherings at their universities one day and being sent home the next. I’ve watched as my state’s health care system has quickly become crushed by the virus, reporting more cases than any other country in the world.

While individuals should be taking measures, like practicing social distancing to curb the spread of the virus, a pandemic requires large scale action, achieved by rapid and comprehensible social policies. As someone who has traveled from one coronavirus hotspot to another, I’ve witnessed in detail what happens when governments fail to communicate clearly and underestimate the need for urgent action in times of crisis.