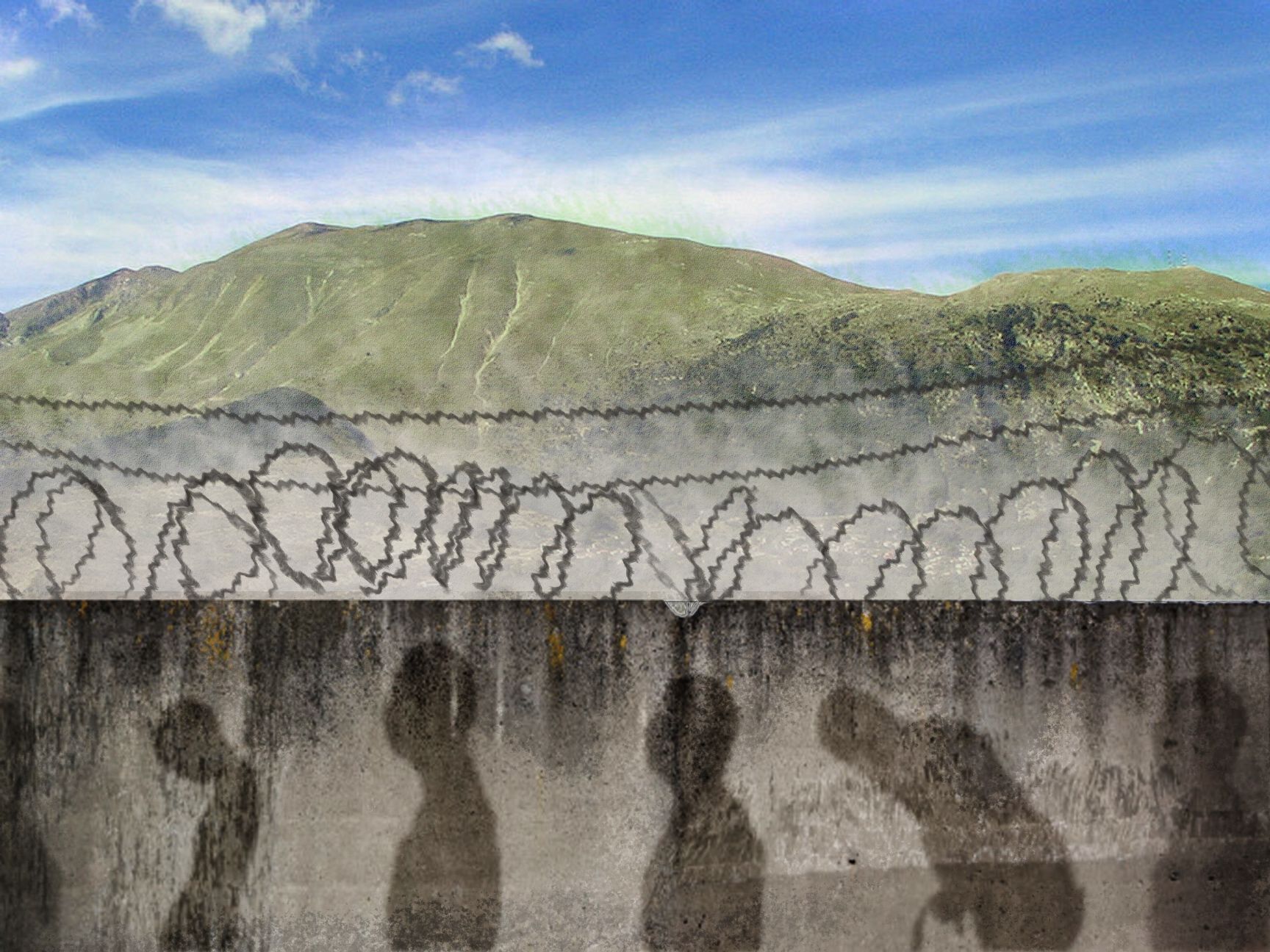 “My name is Omar. I am from Syria. I am in Greece, on Leros island. This is the minor section, next to the sewage. Of course we will catch coronavirus in this situation.”

In a vertical video shot on a phone, the asylum-seeker from Syria reveals a number of large puddles, presumably overflowing from the sewage, right outside the doors of the barracks where he and other teenagers live. The clip is included in a YouTube video published by the #SOSMoria initiative. The petition campaign was launched by two doctors from the Netherlands who have worked at Moria, a refugee camp on Lesvos island in Greece. On its website, #SOSMoria calls on European leaders to evacuate asylum-seekers from the Aegean islands in order to prevent the “medical disaster” that is expected to occur once the pandemic reaches them. So far, more than 6,800 registered physicians have signed the petition, in addition to nearly 50,000 European citizens, citing the “norms and values of European healthcare” that are on the verge of being violated.

Other European countries have seen similar campaigns. In Norway last fall, before COVID-19 added to the urgency of their mission, two healthcare workers who have also spent time working at the camp directed a petition toward the Norwegian government called “Evacuate the children from Moria now.” On April 1, instead of demonstrating as usual in front of the Parliament in Oslo, these activists organized Norway’s first online demonstration through Facebook Live. #SOSMoria, “Evacuate the children,” and similar campaigns bring up promises that European leaders have made in recent years to take in refugees—promises that have gone unfulfilled.

Although a number of Greek islands are home to what the Greek government calls Reception and Identification Centers, the activist campaigns narrow in on the Moria facility on Lesvos. The other camps are not forgotten; despite living on another island, people like Omar remain central to #SOSMoria. However, Moria is Europe’s largest refugee camp. The severe overcrowding in the facility has become a touchpoint in the evacuation campaigns: despite being constructed to house around 3,000 people, Moria is now home to over 20,000 asylum-seekers. More than a third of the refugees living in Moria are children, and more than a thousand of them are unaccompanied. The situation is similar in other facilities. Out of more than 7,000 people crammed into a camp built for less than a tenth of that number, 400 of the children and teenagers living in Vathy refugee camp on Samos Island are unaccompanied.

The #SOSMoria video proceeds to show viewers the living areas for minors on other islands. We meet Ahmed Zakara, 17 years old, who tells us that his father is dead and that his mother is still in Syria. He has not seen a doctor in the three and a half months since he arrived at Samos island. Since the Syrian civil war broke out in 2011, Syrians have become the largest forcibly displaced population in the world. Associated with the wave of uprisings known as the Arab Spring, the conflict in Syria escalated into a violent civil war when major protests were met with a violent crackdown by the Bashar al-Assad regime. More than five million people—nearly a fourth of the country’s pre-war population—have fled Syria in the last decade.

The asylum-seekers in the various facilities on the Greek islands live in dangerously close quarters—in some places, 17 people share one tent. This overcrowding makes Moria and the other facilities hubs for mental and physical illness, with infectious diseases more likely to spread rapidly in the tightly packed tents. With COVID-19 bringing governments across Europe to their knees, the international organization Doctors Without Borders fears that it is but a matter of time before catastrophe strikes Moria. Before then, doctors, humanitarian campaigns, and UN agencies hope that the European Union (EU) will take charge by giving asylum to refugees stuck on the Greek islands.

By the middle of March, Lesvos already had a confirmed case of COVID-19. Although only local residents have tested positive so far, doctors and humanitarian groups warn that outbreaks among the asylum-seekers are likely to happen soon. According to Guardian journalist Harriet Grant who visited Moria in January, more than 13,000 of the facility’s inhabitants reside in an olive grove surrounding the main site, “in a filthy unofficial camp of tarpaulin tents and makeshift huts made of pallets.” According to Doctors Without Borders, some six-person families live on 32 square feet.

Outside of their cramped living areas, people living in Moria also have to rely on densely packed lines and routine close contact with others to take care of most of their basic needs. To get access to bathrooms and showers, receive meals, and see health personnel, for example, they must risk their own health by violating international standards of social distancing. In some areas of the camp, 1,300 people share access to one water station. Fifteen-year-old Moria resident Masoud Alizada from Afghanistan explained in an interview with Slate that he goes “very late...to the food line” to minimize contact with others. However, this strategy has its own drawbacks: going later means getting less food.

Even the most basic hygiene precautions are nearly impossible. On top of the mud and garbage streaming through the camp, Moria is dealing with a severe shortage of water. There is no access to soap, and sanitation is a huge problem—up to 160 people use the same toilet. To top it all, the medical workers in Moria have already been overwhelmed for months. There are not enough medics to handle the day-to-day injuries and chronic illnesses of the thousands of people living in the facility. Usually, the NGO and volunteer doctors working at the camp only have the capacity to attend to the most urgent cases.

The existing public health concerns in facilities like Moria demonstrate that the protective measures implemented elsewhere in Europe would be futile in such overcrowded spaces. In recent weeks, signs recommending social distancing and proper hygiene have been placed around Moria. As evidenced by their dismal living conditions, asylum-seekers living on the Greek islands do not have the privilege of taking these precautions. In the words of Marco Sandrone from Doctors Without Borders, “the preventive measures sound like a joke to these people. How can you ask someone living in a tent to go back and isolate in their room, how can you ask [them] to increase their level of hygiene when there aren’t enough toilets, showers, water points in the camp?” Until Moria becomes less densely populated, the health personnel working at the facility can do little more than measure people’s temperatures and wait for an outbreak.

Conditions in the facilities were considered inadequate long before news of a strange SARS-like virus came out of China in late December. In the last few years, pictures and videos from Moria and neighboring Greek islands have flashed across European news channels on an intermittent basis. These pictures—depicting the barbed wire surrounding the camps and the makeshift barracks refugees are forced to live in—are images that the leaders of Europe would prefer to forget.

When the refugee crisis peaked in 2015, Europe-based organizations and activists increased their demands that the EU take action by receiving more asylum-seekers fleeing war and conflict in Syria, Iraq, and Afghanistan.

In 2016, European leaders signed a deal with Turkey that for each Syrian refugee in Greece returned to Turkey, the EU would take in a Syrian refugee from Turkey. As many pointed out then, and have continued to point out since, this deal was based on the shaky premise that Turkey is a safe place for refugees. The main goal—not to mention outcome—of the deal was to cut off the route across the Aegean Sea for Europe-bound asylum-seekers. In the words of the leader of Amnesty International Europe, the deal was “celebrated by people who are dancing on the grave of refugee protection.” Since then, the EU has relocated only 25,000 Syrians out of Turkey—a number far below what humanitarian organizations had called for.

As European leaders patted themselves on the back in 2016, the deal made Greece overwhelmed by a crisis the EU had prematurely decided was over. In the words of NPR, the Aegean islands became “squalid dumping grounds” for asylum-seekers. Both unable to return to their home countries and unable to reach the countries they had hoped to find asylum in, thousands of refugees were abandoned in facilities like Moria, which began to take on the characteristics of detention centers. In 2017, the mayor of Lesvos called the island “Europe’s Guantanamo Bay.” European leaders blamed Greece for not using EU funds to improve conditions in the camps while Greek politicians blamed the rest of Europe for placing a disproportionate refugee burden on Greece—a country already facing economic instability.

Until the recent pandemic, humanitarian efforts targeting Moria generally worked toward alleviating the pressure put on the Greek government by sending new arrivals to other countries. Last month, however, the focus shifted to bringing the people in the camps—especially those considered vulnerable to COVID-19—to places where social isolation is feasible.

Over the last month, as the pandemic began to devastate countries around the Mediterranean, humanitarian organizations and doctors called on European governments to comply with the 2016 EU-Turkey agreement and take in more refugees. Seven EU states came together in mid-March to announce that they would accept 1,600 vulnerable people, mostly children, from the Greek camps.

Left unanswered is how these states would determine vulnerability; according to UNICEF, there are at least 3,900 unaccompanied asylum-seeking minors in Greece. More than half of these children and teenagers live without appropriate accommodations. The joint decision between the seven countries was reached before the pandemic made such action particularly urgent. Ironically, the pandemic has delayed the relocation plans.

Meanwhile, some countries have gone ahead with receiving vulnerable individuals from the refugee camps. On April 8, Germany and Luxembourg announced that they are preparing to receive just over 60 unaccompanied children from camps on Lesvos and Chios: 12 will be relocated to Luxembourg and 50 to Germany. The relocation of the children is being organized by the UN migration agency, the International Organization of Migration.

Some figures—mostly European politicians opposed to taking action—have asked what difference it will make to distribute vulnerable asylum-seekers across various European cities. Although solutions based on European cooperation are necessary for the long-term safety of asylum-seekers coming from Syria, Afghanistan, Iraq, and elsewhere, medical professionals and public health experts stress that immediate action is needed now. As the densely populated and inadequately resourced facilities make clear, evacuation is the best public health measure that can be taken for the asylum-seekers living on the islands.

Conditions in the Greek camps have been dire for years. COVID-19 is only the most recent in a host of challenges faced by refugees stuck in the Greek camps. In the words of child psychologist and Doctors Without Borders field worker Katrin Glatz Brubakk, who helped launch Norway’s “Evacuate the children” campaign, “it has always been inexcusable to let these people live in the crowded camps...Forcing them to continue living under such conditions without the ability to protect themselves is on the verge of criminal behavior.”

EMILY RUST B‘22 is fed up with Erna Solberg and Ine Eriksen Søreide’s nonchalant disregard for human rights.