Dorothy Wordsworth, ruin-porn, and a call for sensory ethnography 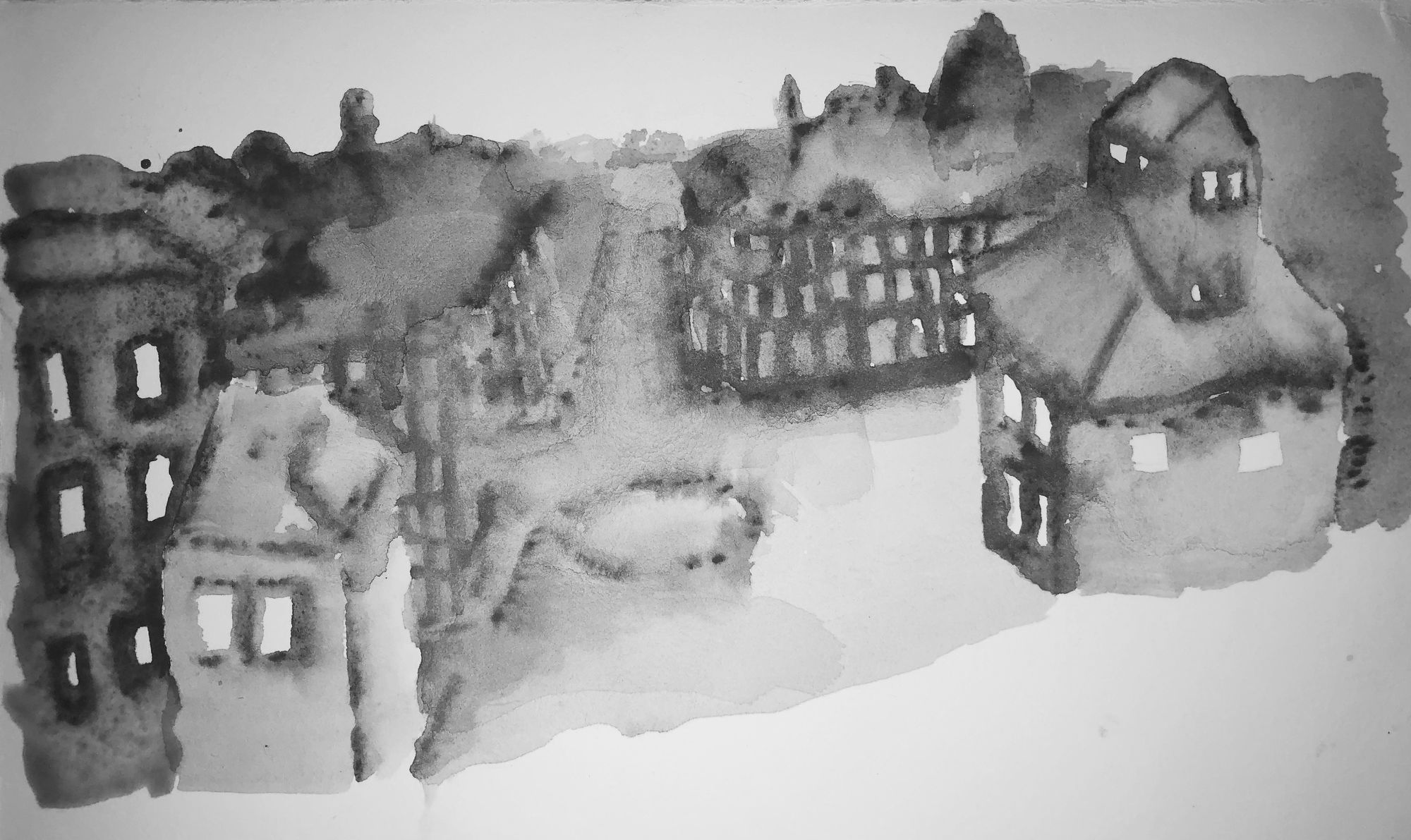 Between May of 1800 and January of 1803, while living in a cottage in England’s northwest Lake District, Dorothy Wordsworth diligently kept a journal chronicling the interactions of ecological actors in her sensory radius: weather, trees, house, neighbor, animals, moon, and brother, William—who, in 1822, sifted through her entries, tinkered with her prose, and published the popular Guide through the District of the Lakes under his own name. Unlike most of her Romantic contemporaries, Dorothy wrote people into and out of her bucolic terrain, tangling the contours between the human and ecological. In language that slips between empiric and lyric, she sketches her environment relationally, flattening material taxonomies into a continuous perceptual plane.  She distilled a mass of sensory data into a hybrid literary form—one that unravels conventional distinctions between poetic and ecological descriptive toolkits. These vocabularies, Dorothy suggests, have a lot in common.

Overwhelmed by an excess of sensory information, a reader of Dorothy’s journals is left with little more to do than piece together her environment through the tiny accretions of matter and incremental processes of change she lays bare in her notes. But despite her relentless noticing, her style was always tightly controlled—an ‘objective,’ scientific tone that came to characterize her own subjectivity, rendered implicitly by describing what’s around her. The entries came to resemble something like a poetic sketchbook, ecological language compressing and distending, scraps of sensory minutiae arranging and rearranging themselves into an exterior account subtly suggestive of a rich interior life. William combed through his sister’s notes ravenously, ascribing public-facing potential to what he perceived her language to be: feminized, amorphous matter in need of an order-giving principle. “Dorothy stored her mood in prose,” Virginia Woolf wrote in an essay of criticism, “and later William came and bathed in it and made it into poetry.” He compressed her meandering language into verse, manipulating her subjectivity until it became something he could possess.

But even in its nascent form, Dorothy’s journal holds its own. The journal works both microscopically and imaginatively, binding together bits and pieces of sensory detail into something at once empirically precise and otherworldly. Typically ending with dashes, not periods, her entries overlap into one another, working as what ecocritical scholar Kenneth Cervelli calls “an ever-expanding whole”—an ecological form mimicking the lively landscape in which she finds herself. The journal models a documentary apparatus rooted in human subjectivity—where ecology meets interiority, producing a reserve of sensory information beginning in a body and extending into the land. Through the journal, we come to know a landscape as always invoking a human documentarian—one whose interiority is just as textured and varied as the world it resides in, and whose relationship to that world is so much more than just ocular.

The journal calls upon the human presence in two primary ways: as subjects embedded in the ecological landscape at hand, and in the subjectivity embedded in the apparatus itself. This situated mode makes it nearly impossible to uphold the binary between the phenomenological and scientific—the “subjective” and “objective”—that undergirds Romantic-era literature, let alone an entire imperial history contingent on defining “nature” as inert and pastoral, offering itself for extraction.

Dorothy’s peopled terrain and experiential accounts can offer us something today as we navigate the newest iteration of an old documentary trope, surfacing as aesthetic reprieve throughout the internet over the last few weeks: images of deserted cityscapes, emptied commons typically brimming with human interaction, defamiliarized industrial expanses. These images both haunt and sooth, briefly offering visual breathing room amid the density of virus-related news updates and thinkpiece influx. Evading both human subjects and human subjectivity, they sanitize the loss they depict. They allow an impossible glimpse into something that would disappear as soon as we stepped inside of it: a landscape constructed by people, where the people are nowhere to be found.

The photo series perhaps mostly widely circulated in light of global lockdowns and social distancing mandates was one published by the New York Times on March 23, titled “The Great Empty.” In it, a dim theater in Moscow bears empty seats and a lone cellist on stage; a deserted Santa Monica beach reflects a heavy golden hour; a masked attendant in an information booth glows beneath Bangkok’s green lamplights, alone. Though almost every photograph is punctuated by at least one human figure, the images call upon conventions of landscape paintings which have historically concealed any trace of human presence and perspective in an attempt to depict an unblemished, Romantic “nature.” It’s an elision that is part of the broader settler-colonial project of categorizing all matter as human or nonhuman, active or inert.

In his recent Verso article, “The Deserted Cities of the Heart,” Rob Horning identifies humans in these virus-gutted cityscapes as “othered to themselves, becoming a species for remote observation.” The wide, vignetted angles in the photo series point to a far-off documentarian suspended above the plane of the human in the frame, rendering the occasional appearance of the species an intrusive, stark presence—one that no longer belongs in the cityscape. In all of these photos, visual distance dilutes the emotional valences. Some are captured by drones; others, like those featured in a March 24 WIRED Magazine feature, by imaging satellites in space. “Immune to being objects in the world,” Horning writes, the detached documentarian not only offers us—the even more distant viewers, whose experience of abandoned cityscape is further mediated through digital platforms—a feeling akin to the Romantic sublime that early landscape painters sought to imbue in wild, pastoral American expanses, but also allows us to briefly imagine that “the erasure of humanity doesn’t actually include us.” In obscuring both human subjects in the scene and human subjectivity from the apparatus, these photos unsympathetically produce empty space. And for the viewer who is given no visual points-of-access to the human, such emptiness only elicits a desire for more.

This proliferation of “ruin-porn,” an emergent photographic genre that saturates industrial collapse with Romantic, affective qualities of the “natural” or sublime, echoes what Jacobin’s Dora Apel deems “the epicenter of a photographic genre” and “the global metaphor for capitalist decline”: the glamorized deindustrial landscape of Detroit. Sedated by refined, minimalist aesthetics, voyeurs of ruin-porn lose sight of the imminent material crises these images neglect, finding mindless appetite—and even pleasure—in the dissociative visuals of decay. Ruin-porn, Apei argues, invokes co-constitutive human subjects: the insider and the outsider, which, in light of this moment, distinguishes between those privileged enough to remain domestically confined and those whose sustained essential labor makes such domestic confinement possible. The former views ruin-porn images; the latter punctuates them. While partially a compulsory nod at a vague sense of alienation and loneliness, scenes of industrial abandonment are most powerful in their production of hunger and desire, which—for the insider viewer, repeatedly removed from the material conditions of the deserted cityscape at hand—simultaneously accelerates and exalts a world without humans. Only this time, the pristine panorama is one of asphalt expanse and ambient streetlights with no one beneath them.

At the Sensory Ethnography Lab (SEL) in Cambridge, Massachusetts, director and founder Lucien Castaing-Taylor leads a group of filmmakers through an introductory class where students are urged, through exercise and experimentation, to consider the camera a complex sensory apparatus—not unlike a human mouth or hand. Quietly an extension of Harvard, SEL merges experimental artist collective with graduate-level academic study at the intersection of anthropology, visual art, and environmental studies. Situated within a larger critical turn toward nonhuman materiality and as a site of semiotic and agentic capacity, the mission of SEL, as articulated on its website, is to attend to the “aesthetics and ontology of the natural and unnatural world”—to produce documentary forms that privilege rich, immersive sensory experience over conventions of logic, narrative arc, and verbal sign systems. SEL’s most popular films of late include Leviathan (2013) and Sweetgrass (2010). The former documents the interactions of fish, flesh, machinery, saltwater, and human labor on an Atlantic fishing boat off the coast of New Bedford, and the latter follows cowboys leading sheep up a mountain in Montana. Extending such situated accounts into urban spaces, People’s Park is a 75-minute unbroken piece of footage filmed from the visual perspective of director Libbie Cohn as she is pushed around a wheelchair through a popular park in Chengdu.

This work emerges from a long lineage of documentarians hybridizing poetic and scientific registers—a history in which Dorothy Wordsworth is squarely positioned. In an interview with Point of View Magazine, anthropologist and filmmaker Véréna Paravel establishes SEL’s collection as the “counterpoint to mainstream docs” in that they are “less discursive, less interpretive, more invested in aesthetic opaqueness and the interpretive agency of the viewer.” SEL’s work engages the camera as a tangible object that physically interacts with the world and—unlike a human mouth or hand—holds a record of these points of sensory contact. Cameras that assume a nonhuman subject, maybe by way of adhering themselves to nonhuman materiality, become collaborators of authorship, telling stories that push the narrative limits of human language and sensory systems. Challenging conventions of both ethnographic and documentary filmic tropes, SEL positions its documentaries as not only records of material interactions but material entities of their own accord—ones that possess full, complex sensory systems, not unlike our own. By understanding the camera as its own documentary and sensory agent, we are asked to forgo a certain sense of directorial intent.

While the point at which the camera ends and the editorial hand begins is left deliberately ambiguous, human subjectivity is always central to SEL’s projects. To sanitize the nonhuman documentary apparatus—in other words, to give it the authority of an purportedly ‘objective’ perspective—is to reproduce the dangerous formal distancing mechanisms of ruin-porn. It’s a displacement of subjectivity reminiscent of William’s sanitization of Dorothy’s prose, his extracting of empirical accounts and disposing of the residue of her interiority. Footage filmed from the slick floor of an Atlantic fishing boat is still footage assembled and sculpted—co-authored—by a person. To glorify mediated access into a world without humans is to neglect the fact that every documentary apparatus is further mediated by a human subject.

SEL asks us to see the similarities between the camera and the human—primarily, that neither offers a purely ‘objective’ perspective. But it’s also crucial to resist the temptation to fetishize the slippage between human and digital sensory systems. Paravel notes a common misconception of the filmic process of Leviathan that dangerously borders on conflating human and nonhuman subjectivities, eliding differences in experience, power, and affective capacity. It’s easy to imagine that the filmmakers secured countless tiny cameras to countless exterior nodes of the boat—an assumption that “goes hand in hand with the fetishization of new small digital technology, as if the filmmaker is neither here nor there,” a detached, suspended subject, not unlike the drones and satellites photographing the defamiliarized city. Paravel confirms that all footage in Leviathan, except four shots, was “attached to a body—ours or the fisherman.”

There could be a version of the New York Times photo series that returns the images to the subjectivities that produce them, the subjects that populate them. This return would be like tracing William Wordsworth’s poetry for evidence of Dorothy, or finding in his pastoral landscapes the human figures she was keen to write in. The photo series would demand that a deserted cityscape linger in its own emptiness, because without the people—present or absent—the photos would have no way to exist.

TARA SHARMA B‘20.5 would like to be quarantined with Dorothy Wordsworth.