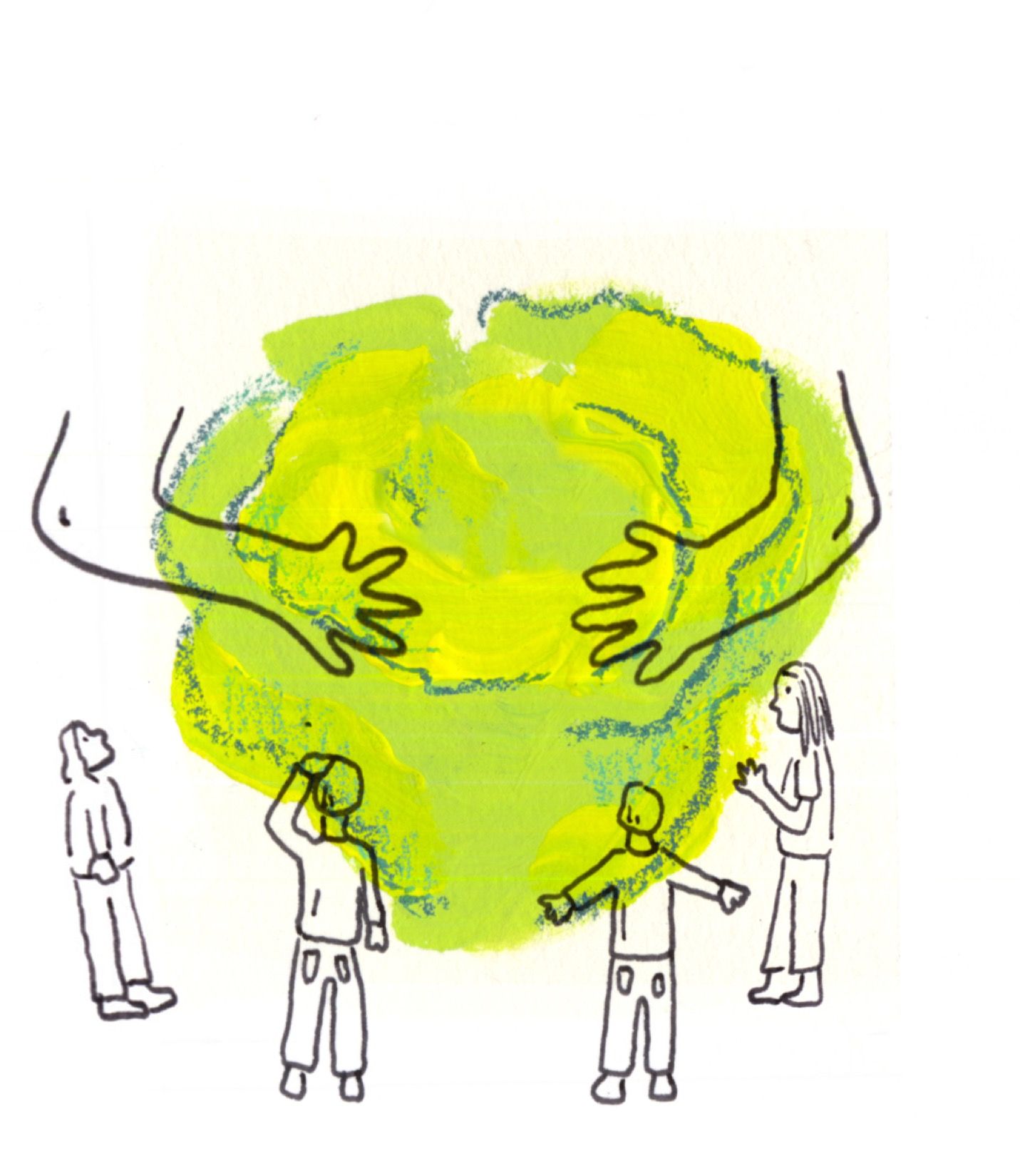 “Cabbage guy,” or the cabbage merchant, is one of the most iconic characters in Avatar the Last Airbender, an animated TV series that featuring an alternative Asia with superpowers instead of regular plebeian humans. Imagine a story about four or five heroes, each with different backgrounds and elemental powers based on a different Asian or Indigenous culture, fighting together to end the 100 year war and defeat the Fire Nation’s ruler, the evil Firelord. Throughout their adventures, the iconic cabbage merchant often finds himself in the middle of these fights as he pushes his cart of cabbages through the streets of China-esque Earth Kingdom cities. Time and time again, his cart is destroyed, his cabbages are thrown to the ground, ruined, and he cries out “MY CABBAGEEEEEES!”

Is this scene realistic? If the Earth Kingdom cities represent Chinese cities, then this cabbage merchant must represent a Chinese cabbage merchant. I asked my grandmother to tell me a story about cabbage before the Cultural Revolution. She loves to talk. And she does remember rows and rows of cabbages planted in early fall and harvested right before winter. She recalls the rowdy crowds and a jumble of loud Mandarin under the awnings covering the street; rows of leafy greens, heads piled in well-ventilated pyramids, stems pointing one way and tops the other. Her father picks out dozens of cabbages to last them through the winter.

Across the world, cabbage appears again, in a fictional book based in 20th-century London: Roald Dahl’s Charlie and the Chocolate Factory (I can’t read, so I listened to the audiobook). Eric Idle, the narrator of the novel, describes the story of a starving, working-class proletariat family, the Buckets, in which Charlie, the only child, has to take care of two parents and four bedridden grandparents. The meal of choice —or the lack thereof—for this family is an unflavored, pitiful cabbage soup. I have never eaten cabbage soup, but I can imagine that it’s as dreary and wet as it sounds.

Cabbage’s story continues into the New World, where every day, thousands of children ask their parents and teachers, “Where do babies come from?” Some say they come from storks, others say they come from the uterus, but in reality, babies come from cabbage patches! (why else would they be called Cabbage Patch Kids?) Cabbage is clearly culturally significant. In fact, the ubiquitous staple crop has a rich history that dates back 3000 years to Ancient Rome.

Back in the day, cabbage was considered a delicacy, thought to have medicinal properties as a laxative that could cure gout and the effects of ingesting poisonous mushrooms. For your enjoyment, I will paraphrase parts of the English version of the Latin text Di Agricultura written by Roman soldier and historian Cato the Elder.

Of Pythagoras's cabbage, what virtue and health-giving qualities it has, [...] and the urine is wholesome for everything. [...] If you save the urine of a person who eats cabbage habitually, heat it, and bathe the patient in it, he will be healed quickly; this remedy has been tested. Also, if babies are bathed in this urine they will never be weakly; those whose eyes are not very clear will see better if they are bathed in this urine; and pain in the head or neck will be relieved if the heated urine is applied. If a woman will warm the privates with this urine, they will never become diseased. The method is as follows: when you have heated it in a pan, place under a chair whose seat has been pierced. Let the woman sit on it, cover her, and throw garments around her.

Well, now we all know what to do if your roommate catches the flu: eat cabbage, pee on them, and wrap them in your dirty laundry.

Beyond its medicinal properties, cabbage was also eaten before a night of heavy drinking, so that aristocrats could imbibe more wine. Much like the healing-crystals popular today, it was believed that cabbage could alleviate the after effects of copious drinking. These days, modern-day aristocrats above the age of twenty-one usually eat bread, rather than cabbage, to ease the effects of their binge-drinking.

Today, aristocrats and the proletariat alike enjoy cabbage in many forms. It has become a vital source of nutrients and an instrumental ingredient in many dishes from around the world: German sauerkraut, Korean kimchi and Chinese pork and cabbage dumplings, Japanese okonomiyaki, Russian shchi stew, American coleslaw, Kenyan sukumawiki (which also uses kale and collard greens), Curtido pickled cabbage from Salvador and Colombia, Vitamin C-rich Kerguelen cabbage from Antarctica, Mediterranean stuffed cabbage rolls, and many more!

How did cabbage become such a universal food? Wheat, corn and rice maintain a similar status, but what other non-grain food is as popular as cabbage? True, chicken and fish are also great and everyone loves them, but I already wrote five paragraphs about cabbage so I’m not just suddenly going to switch now. And also lettuce is limp and nutritionally useless.

Cabbage is one of few vegetables with a worldwide presence, the reasons for which are manifold. Logistically, cabbage is easy to grow, retains a lot of water, is rich in nutrients, and keeps throughout the winter. But even more so, cabbage has lasted because it carries with it distinct political and cultural meaning. Here are three examples of how cabbage, and its image, has shaped—and been shaped—by politics, society and culture.

World War I saw the manipulation of cabbage's image in the US. As anti-German sentiment steadily grew, so too did American nationalism. As a 1918 newspaper edition of “The Welch Watchman” from Welch, Oklahoma nicely put it: if you were a “lover of succulent cabbage properly fermented” you could “now indulge [your] appetite without suspicion of disloyalty.” German sauerkraut was renamed “Liberty Cabbage.” Leave it to the Americans to plaster “Liberty” and “Freedom” on anything that breathes or moves, or in this case, exists. While french fries became “Freedom Fries”, hamburgers became “Liberty Steak”, German measles became “Liberty Measles” and German shepherds became “Liberty Dogs”. Anti-German food became a fixture of the nation’s identity.

Nationalist sentiment extended beyond food consumption and into production, into the farms themselves. At the end of World War I, the government encouraged people to start planting their own personal vegetable gardens, called “Victory Gardens,” and cabbage was one of the vegetables that people were encouraged to grow. The National Garden War Commission, the organization which started this program, watched as millions of Americans become “producers” and “soldiers of the soil.” Other government programs such as the United States School Garden Army and the Women’s Land Army of America started urban youth and housewife-based urban farming projects, promoting patriotism and local food production.

After World War II, Russia had to recover from the most devastating siege in recorded history: the 900-day Battle of Leningrad. The city’s inhabitants were confined within Leningrad’s walls by the German army, with no access to their farmland or resources beyond the walls. It should be noted here that one of the primary foods planted during the siege, near St. Isaac’s Cathedral in Leningrad, was cabbage! If so inclined, you may Google “Cabbage Siege of Leningrad” to view photographic evidence.

Kimchi, cabbage's most iconic rendition, played an important role during one of the Vietnam War. As part of the war effort, South Korea sent thousands of soldiers to fight alongside the Americans. However, the soldiers were miserable. So, the South Korean Prime Minister Il Kwon Chung asked US President Lyndon Johnson to send kimchi to the South Korean troops. The South Korean government wanted to strengthen its trade agreements with the US and asked that the nation spend three to four billion dollars per year to improve the South Korean economy. Subsequently, in the summer of 1966, the first “kimchi-in-tin” products were mass-produced in American factories and shipped to South Korean soldiers overseas. On the global stage, kimchi became one of the first examples of Asian soft power: the use of culture as a tool for diplomacy.

Kimchi’s story here diverges. The food spread throughout the world, its popularity steadily growing alongside the South Korean economy. It was featured in its first scientific paper and appeared in the 1966 International Conference of Food, Science and Technology, for its probiotic properties. Today, there are more than 400 kimchi producers in South Korea alone, with estimates of a similar number in North Korea. In fact, kimchi has been a catalyst for the North-South division as well as a vehicle for its unity. For instance, South Korean Kimchi became a UNESCO World Heritage cuisine in 2013, solidifying its global stance as a cultural monument, two years before North Korea, which infuriated Pyongyang. But at the same time, kimchi has remained a staple for people living in both countries, and has become a Korean cultural touchstone for those outside Asia.

Cabbage has made its way around the world and throughout time, in many different social, economic and political contexts. But what are the implications of cabbage becoming a universal vegetable? The recent transformations to the cabbage industry are similar to those of other massive monocrops. What sets cabbage apart culturally does not extend to its production and harvest. Although there are countless methods for making kimchi, the methods for growing the cabbage have become somewhat standardized. What makes this essay a bit sad, is that I could have written about almost any food and my conclusion would be the same. Just like the production of corn, soy, or wheat, cabbage production is largely mechanized and benefits from genetic selection, pesticide use and large-scale irrigation. Brown students aplenty have written “diatriabes about the myriad malignant effects” of Big Ag, and many others about how Big Ag has relieved food insecurity.

While cabbage production has become standardized, what makes cabbage special is the cultural significance that people over thousands of years have attached to it. The sleek red heads (of cabbage), crispy green leaves, buttery stir frys, these are what make cabbage special. Today cabbage is special because there is so much interesting science attached to it. Red cabbage can be seen starring in those “food-hacks” Youtube videos! The purple pigment in red cabbage can act as an acid-base indicator, and colors foods  or clothing different colors depending on the acidity of a solution. The cabbage pigments turn pink in acid, purple in neutral solutions and blue in basic solutions. I guess what I’m trying to say is that cabbage is pretty frickin’ awesome. It has a rich cultural background, important role in society, and is intriguing even today.

Dear reader, next time you eat a cabbage, I hope that you think back to this article, or at the very least smile internally, recall the “cabbage guy” of yore and say to yourself “MY CABBAGESSSSS”