On the Almost Liberating Possibilities of Moshing

A Personal Politics of Mosh Pits 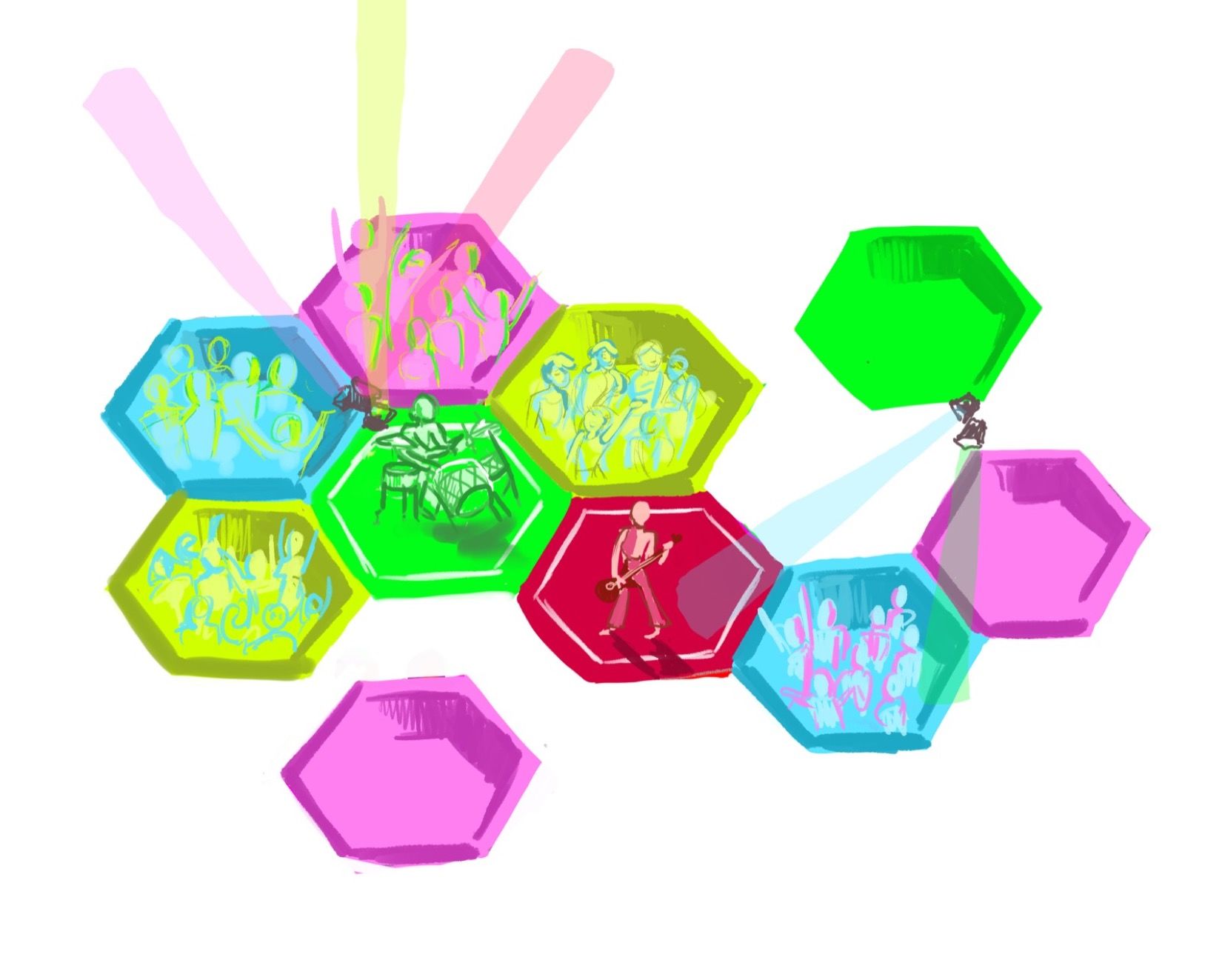 I was first introduced to moshing by the massive bruise on my coworker Dannyboi’s cheek. Dannyboi shuffled into the ice cream shop where we worked two minutes late and grabbed a pint from the freezer. He winced as he iced his chipmunky face. Service work is service work, and service workers talk. When Dannyboi walked in, we talked bruise.

“What happened?” we, the chorus, sang.

“Did the elbower apologize?” I asked.

“Nah, it was a great mosh pit. Too much chaos for an apology, you know. It’s whatever.”

Dannyboi’s bruise lived two weeks and died a slow death. I shuddered every time I saw it. I knew I would never mosh.

My first mosh pit was a birthday present to myself.

I bought one ticket to an IDLES concert. IDLES is my favorite punk band, a screaming bastion of love and kindness. They sing of unity, respecting immigrants, eradicating toxic masculinity and rape culture. The band’s lead singer, Joe Talbot, belts out raw, drunk-uncle-at-karaoke vocals.

Joe Talbot’s first words at the concert: “Take care of yourselves, alright?”

The words were needed; a mosh pit had already formed.

A mosh pit is not inherently violent, but it tests violence’s lower limit. Moshing shakes up the boundaries of how bodies can interact. How hard can I shove a body and inflict no pain? How soft is soft enough to let that body come tumbling back for another shove?

From a bird’s eye view, the pit resembles the cross section of a beehive. From the crowd, it’s a freeform jazz version of WrestleMania in which all the ropes are human arms. The goal is not to pin, but to free oneself from stillness, boredom, gravity. The goal is elevation—bodily epiphany.

In other words, a mosh pit is a bunch of bodies shoving each other and dancing like children mid-tantrum.

At the IDLES concert, Joe Talbot made the pit more than bodies colliding. Joe Talbot is a bearded shirtless punk with dyed pink hair, a man with a history of drug abuse and alcoholism, a father to a stillborn child, and a preacher of the motto “All is Love.” Joe Talbot asked the crowd to cleave down the middle. The moshers retreated ten paces from the dividing line, forming two scrums that faced one another. It looked like the beginning of a dodgeball game. Runner’s stances. Twitchy anticipation.

“When I say go—and only when I say go—”  Joe Talbot said, “you’re going to show each other more love than you have ever shown a community. Because that’s what we are, a community. Do you understand?”

Learned moshers call this particular brand of chaos a ‘wall of death.’ But Joe called it love. And on his cue, I ran forward with all the love I could muster. I have never known such turbulent intimacy.

At its best, a mosh pit is the most human, natural, and exhilarating expression of intimacy a body can achieve.

A mosh pit is the logical conclusion to a drum kick or bass line. A beat prompts a push, which necessitates a push back, which results in the organic, lung-like heaving of the whole crowd. All natural, all alive. Even choreographed movements, like Talbot’s wall of death, lack order. Although they begin with a sense of who should run into whom, I knew as soon as I sprinted into someone sprinting into me that all order was lost. Mosh pits are all about shaking off the plan.

Mosh pits allow one to embrace a childlike disregard for bodily consequence. While moshing, I recalled a demonstration in my 4th grade classroom. Ms. O’Connell helped us visualize how particles form different states of matter by instructing us to move around on her fuzzy blue carpet. We each represented a water molecule, we were told.

“Solid,” she called. Everyone clumped together, vibrating.

“Liquid,” she called. We spread out viscously. We walked into each other and bounced off.

“Gas!” We sprinted, giggling, our arms up to repel other molecules.

One can find every state of matter in a mosh pit. The furthest from the pit shift minimally, walling, wallflowering. Solid.

Further in, the moshers follow the waves of the rest of the crowd. They cohere to form bubbles of space, surface tension. Liquid.

In the mosh pit, I found myself more comfortable in my body than I had ever been. I viewed my body not as a collection of parts I did and did not like, but as a means of delivering joy both to myself and strangers. A community formed around unorthodox care. We showed each other love by shoving with consent, by protecting each other from the shoves when needed.

“Shoe!” A guy circled his arms around my untied shoe, smiling.

I lifted my leg and tied my laces in the protective bubble he created with his body. I bet he would have tied it for me if I had asked.

Later, I shouted, “Shoe!” The crowd opened. A crouching human with phone light ablaze grabbed their shoe from the empty circle the crowd formed. I waltzed into the center. Soft pushes greeted me.

After the concert, I biked home safe to my then-partner’s apartment and peeled off my sweat-drenched clothes. Tiny bruises were scattered across my back like constellations.

“I knew everyone there cared for me even as they shoved me,” I said.

Another concert showed me what it means to mosh without love. The band: Lightning Bolt. The crowd: untrustworthy. I saw five crowd surfers crash to the floor from lack supporting hands. Shoves did not account for the shoved. I didn’t realize what I had at the IDLES show until I was flung into an elbow and received no apology.

Since the IDLES show, I’ve moshed at dive bars with tiny crowds huddled around unknown bands. I’ve moshed with art school kids who strained to shove me across the room. I’ve moshed with assholes who shoved anyone around them, whether they wanted it or not. The Lightning Bolt mosh pit was the most dangerous.

At its worst, a mosh pit is a too-masculine, too-violent space for people who want to shove.

At the Lightning Bolt concert, shirtless punks claimed the territory short kids needed to see anything on the stage. Anyone who did not want to mosh was forced away from the front of the crowd. I saw many men and few people of other genders. My hands grazed the shoulder or chest or butt of a stranger who did not want to be touched there, but couldn’t fend off the writhing crowd. I rolled my ankle and limped away from the center. As I limped, I was still pushed. To mosh, a body must surrender to the crowd.

It is a privilege to donate your body to the masses for fun.

It is a privilege to seek the fringes of violence for fun.

I have known these privileges. I am a genderqueer person who grew up as a man for most of my life. This privilege feels distinctly male and white. A body without a societal history of harm may give itself to chaos more readily than other bodies. Thrill-seeking seems most desirable to those with fewer bodily concerns to contend with on a daily basis. Men (white men in particular) are not socialized to fear the hands of the public.

I don’t believe it is wrong for people to seek spaces in which they may enjoy safe expressions of near-violence, but I take issue with the exclusivity of these spaces. It saddens me that I enter every mosh pit with fear that I might be pushed a little harder because of my brown skin or eyeshadow. I take issue with the many power dynamics which prevent women and femmes, people of color, queer people, and more from surrendering to the pit. Mosh pits have provided me with near-perfect experiences of bodily intimacy. I want these experiences to be available for all who seek them. I want my body, each body, to melt into the crowd without trepidation.

At the ice cream shop, my other coworker Charlie rushed in and said, “Be careful around Boston Common. My partner and I were just queer-bashed by some assholes.”

“Oh I’m fine. But my partner got a nasty bruise.”

Despite its shortcomings, I have faith in the mosh pit. Compassionate mosh pits could be oases of care for those who want it. In a world which promises no safety for many bodies, mosh pits could grant curated bodily experiences. People can consent to pushing and nothing else, then experience pushing and nothing else. I believe the pit can grow to include those who are not included yet. With more bands like IDLES, more disciples of compassion in the punk scene, we can redesign moshing around love.

Let the mosh pit expand to accept everyone who needs it. Let each body, whether in the pit or not, achieve ecstasy. Let the pit in all its nonviolent violence and care decry all forms of bodily harm. Let the pit pour into itself until each water molecule has loved its journey. Let it undulate. Like a body. Like a promise. Let it redouble its effort to stop violence from travelling anywhere else. Let the pit’s edges be the walls of a wave pool, where water can crash without splattering the world. Let this be the upper limit of our violence, the lower limit of our joy. Let us all dance until we bike home safe.

JAIME SERRATO MARKS B'20 likes to collide with others.