The History and Future of Two Currencies in Cuba 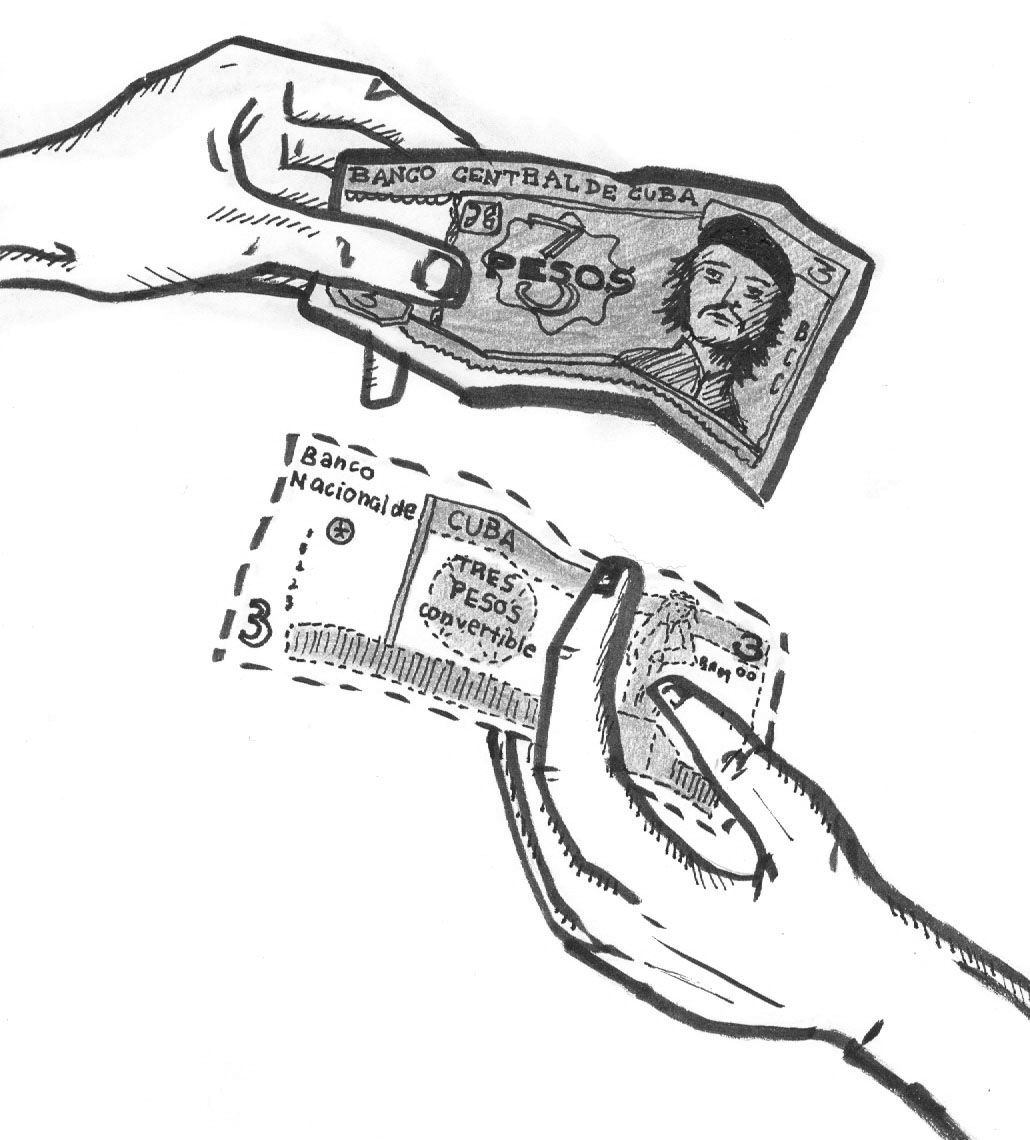 WAKE UP. PUT GROUND COFFEE beans into the cafetera (bag purchased for 5 CUP). Rip a piece of white bread in half (1 CUP) and smear with guava gel (7 CUP) or maybe some soft, white, Caribbean cheese (3 CUC). Leave the apartment, lock the door, walk downstairs, and hail a coche—a shared taxi, one of those old 1950s models—from the street. Get in, tell the chofer “23rd” and pass up 10 CUP for the fare. Get out of the coche, walk to the office, and go to work. After work, jump in a bus (40 CUP cents). Walk back up to the apartment and have dinner (about 20 CUP). Later at night, join your friends at a bar. Buy a cuba libre (1 CUC), or 3 (2 more CUC). Smoke a cigarette (pack costs 20 CUP). Go home, go to sleep, start again tomorrow.

1) The Cuban peso (peso cubano, CUP, moneda nacional, national peso, peso): The national currency of Cuba. 25 CUP is equal to one CUC (see below), or one US dollar.

2) The convertible peso (peso convertible, CUC, dólar, peso): The international currency of Cuba. 1 CUC is equivalent to 1 US dollar.

1) Cuba became independent again on New Year’s Day, 1959, when Fidel Castro and his revolutionaries took over the city of Havana. Following a series of events including the nationalization of US-owned lands and factories in 1960, plus the Bay of Pigs in 1961, the United States introduced a total economic blockade on the island, which has stayed intact until the present day.

2) The United States was the primary buyer of Cuban sugar, and American-run tourism ventures were aplenty in Havana and down the coast, but the Soviet Union made up for the economic void beginning in the 1960s, constituting the majority of Cuban international trade.

3) When the Soviet Union fell in the early 1990s, Cuba fell into a severe economic depression. The government called this “The Special Period in Times of Peace,” and it’s ongoing. Oil was in short supply, resulting in scheduled blackouts throughout the country and a surge of bicycle riding to replace cars. Healthcare, education, and cultural events remained at a high level, and food, while limited, was enough to survive.

4) Cuba instituted a double currency in 1994, when the CUC was added as a separate peso, its value pegged to the US dollar. For years, US dollars had already been circulating illegally through the hands of families receiving remittances from abroad, and it was officially accepted as alternate currency. In 2004, the US dollar was banned from use to keep national transactions in the established Cuban currencies.

5) Last month, on October 22, the Cuban government announced the end of the dual currency. From the national newspaper, Granma: “Se avanzará hacia la unificación monetaria.” We will move toward monetary unification. The notice continued: The unification won’t be the only way to save the economy, but it is a necessary step toward reestablishing the value of the Cuban peso and its function as money. The state assured the public: There’s no timetable yet, but we’ll let you know the details as they become available. This will affect both individuals and businesses.

THE DUAL CURRENCY SYSTEM HAD two sides, of course.

On one hand, Cuba could reap the benefits of international tourism while avoiding inflation for Cuban citizens. “Sugar was once king in the Cuban economy. But tourism brought in $1.35 billion in 1996 from more than 1 million tourists, compared to $970 million earned by sugar exports,” the Baltimore Sun reported in 1998. Creating two currencies was a radical economic move (you’d think it wasn’t allowed), a way to capitalize on the many miles of beaches and colonial architecture while keeping the socialist project safe from dominant market forces surrounding it. After the creation of various state-run hotels up and down Havana’s coastline, Fidel Castro walked through the rooms himself, sat on the beds himself. “We are not oil extractors, we have to exploit the sun, the sea, the air, and the beautiful natural resources of our country,” Castro said in a speech at the height of the Cuban economy in 1977. In the 1990s, he assured the people that other exploitations of an international tourism market would not be permitted, like it had been when the US mafia ran casinos and other establishments on the island prior to the revolution. “Sex tourism will not be allowed to enter here again, nor drugs, nor things of that sort,” Castro said in 1999.

On the other hand, the dual currency spurred the development of two classes in a system that sought equality above all. The highest-paid workers are those with ties to the international market: hotel workers, entertainers, artists. Foreigners use the CUC, so when they pass a tip of a buck or two to a musician at a restaurant, or the boy bringing their suitcases from the taxi to the hotel, those larger, more powerful dollars go straight to someone who would normally be making around $20 a month (a dollar or two a day, which is a modest estimate, can therefore make a huge difference). These industries tend to favor whiter, younger Cubans, rather than those of African descent or the elderly. Doctors, lawyers, professors, and other high education professionals who stay in offices, away from tourists, make less in a month than a taxi driver can in a day.

The first Cuban national currency was created in 1897. Tomás Estrada Palma, the first president of independent Cuba, was exiled in New York raising money for the first Cuban revolutionaries when he was approached by an early entrepreneur, Andrew J. Cobe (& Co., Investment Securities, Broadway Avenue, NYC). Cobe suggested that the Junta mint its own souvenir coin to raise enough money to push forward liberation from Spanish colonial rule. It would be a collector’s item like the Columbian half-dollar, which the US had issued to raise money for a national exposition celebrating the voyage of Christopher Columbus.  “It is confidently expected that some millions of the coin will be sold, and that this source of revenue will hasten the freedom of the island,” Cobe wrote in a letter on April 17, 1987. Three million coins were to be struck, but in the end only 4,865 made it to the island. The coins were minted by Gorham Manufacturing Company of Providence, Rhode Island.

FIRST IN THE PROCESS OF MONETARY unification will come a “preparation period,” where the government will elaborate on the legal procedures and decide who will execute the orders to make unification possible. But it has not been clarified yet which currency will become the singular official one, since the word “Cuban peso,” which was used in the official announcement, can refer to both tenders. In other words, no one knows which of the pesos will be retired.

Academics, journalists and others from the outside speculate about what it means, politically, when Cuba makes changes in its economic system. To some, each step away from the prescribed socialist model is a step toward Cuba’s eventual surrender to capitalism (for better or for worse). Academics in Miami have made it clear: Cuba’s “only option” is to make the national peso equal to the convertible peso. The unification is “positive” and “necessary,” but will create “enormous inflation” and economic “dislocation.” You can’t keep the domestic market insulated from the outside any longer. It’s inevitable; sooner or later, Cuba will join everyone else in the international market.

Cuba counts economic growth with free health and education as a factor. Last year, the economy grew by 3.1 percent. It is projected for 5 percent in 2013. (For reference, the US GDP grew by 2.2 percent in 2012.)

“The economy has become the preferred field for experimentation in new politics,” wrote political economist Julio Cesar Guanche in a 2012 essay about “the old, the new, and the future” in Cuba. Guanche continued: “The Cuban dialogue frequently repeats these two sentences: ‘it’s not easy,’ and ‘we’ll see.’ Both express a feeling inscribed on the national political culture: everything that is easy becomes difficult, and you don’t believe anything until you see it.”

The Cuban government has a heavy hand in its economic policies. Every step into the international economy is a step into a market dominated by states with “an underlying bias against socialist economic designs[1].” It will take time to see how currency unification will go into effect, and what results it will bring.

KAT THORNTON B’14 pays in cash.

[1] J. Moses, “Financial Strategies and Consequences for Cuba as It Engages the World Market,” unpublished paper written in July 1996 (cited in an essay by George Lambie, DeMonfort University, United Kingdom)