Haircuts as a catalyst for change 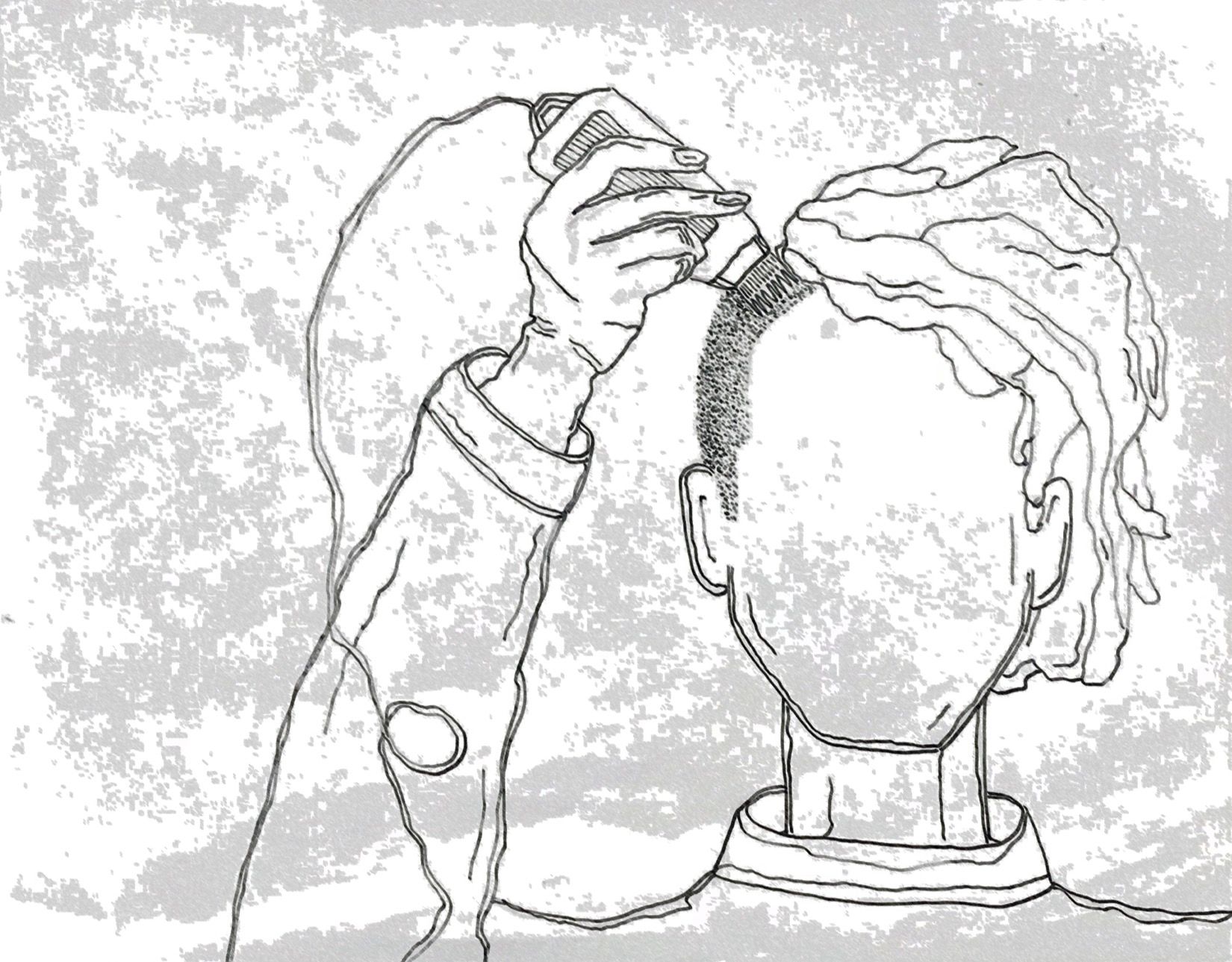 It was a Wednesday afternoon in mid-March of 2013 and I was seated in a chair on the basketball court of my high school gym. Something buzzed above my left ear and then halted, and after a nudge from the hairstylist behind me, I stood up to cheers and whoops, stray hairs falling around my feet. I ran my hand through my freshly shorn locks, which stood just an eighth of an inch off my scalp, and grinned.

That would be the first of many head rubs that afternoon, as more than a dozen of my peers and I, twelve of us just freshman at the time, were given buzz cuts in front of a crowd of cheering classmates, family and friends. It was part of an annual daylong event in our small suburb just north of Milwaukee called Buzz Cuts for Cancer. The idea behind the event was simple: get a bunch of teenagers to shave their heads in exchange for money pledged to the MACC fund, a local nonprofit dedicated to funding childhood cancer research. The hair that was cut off in the process would be donated to Pantene Beautiful Lengths, an organization that makes wigs for patients who lose their hair to cancer treatment.

Somewhat shockingly, it was a hit. Year after year, students signed up months in advance, sending out emails to family members and asking other students for pledges in the hallways. Throughout middle school and early high school, many of us idolized the girls that came before us. Prior to seeing them, I’d accepted the rigid version of femininity that had been packaged for me in TV and movies, the kind that required make-up and a straightener and probably Photoshop. But here, right in front of me, were these magnificent young women with buzzcuts who seemed to hold an almost mythical quality, their confidence and striking beauty unparalleled. If you’d asked me, I would’ve said the sun itself shone out of their near-bald heads. Older girls proselytized, too, saying buzzing was hands down the best decision of their lives. I was convinced.

The event really got started at lunch time on the Wednesday before spring break. In the front hall of the main building, a crowd of students began to gather even before the bell signaling the start of the lunch period. Then the ​buzzies​, as the students shaving their heads were called, lined up for the first chop of the day. The energy in the room was palpable, electric and joyous, overpowering any of the nerves we had going in. Since I was buzzing, my long curly hair was haphazardly arranged in a handful of ponytails around my head. When I took my seat in one of the three hair cutting chairs, the 14-inch ponytails were snipped off in full by one of the student organizers and handed to me to hold, a bizarre exchange that resulted in a roar of cheers.

The second phase was after school, but plenty of people attended anyway. It took place in the school gym, where hairstylists who had volunteered their service stood behind chairs. I usually hated being the center of attention—as a child I had notoriously hidden under a table when a restaurant full of people sang happy birthday to me—but this was different. I didn’t have to perform my emotions; my excitement had been building the whole day for this moment, and the feedback from the crowd was so wholly positive that it felt like I could do no wrong. My cheeks already hurt from smiling. It took less than five minutes for the hairstylist to remove the last few inches of hair from my head, and then it was done; I was handed back to the crowd who embraced me and rubbed my head and showered me with support. The warmth that surrounded me was immense and uncomplicated, the hugs continuous, the affirmations loud and genuine. I was simultaneously more exposed—aware of tiny movements of air over my near-bare scalp, my facial features abruptly thrown into focus—and enveloped, swept up into people’s arms, their fingers grazing the fuzz on my head, engulfed by the tenderness of their words and their touch.

Most girls who buzzed agreed it was best to do it freshman year––to give your hair time to grow out before college––and we were glad it was in March so we could have “like, a normal haircut” before summer hit. Which is to say we were 14-year-old girls, not Mother Theresas. We did it because it felt good to do something good, but also because we would be praised and called cool and beautiful and remarkable and all the things that freshmen in high school want to be known as. We could try on this new identity—one that suggested we were confident, unbothered by the perceptions of others, badass—as a collective in a familiar place where we knew it would be accepted. All the while, we could feel comfort in the knowledge that we would be able to climb back into our former, safer selves if we wanted to by the time we were off to the next phase of our lives.

There were twelve freshman girls in total who buzzed, together with a smattering of upperclassmen girls and a number of boys who shed a couple of inches of hair in exchange for less substantial pledges. Doing it alongside a group of girls I knew and admired made the choice to participate infinitely easier. We were bonded together by that day, forever a part of the Buzz Class of 2013. It stuck with us, as we giggled and shrieked in the locker room that afternoon, staring at ourselves transformed, as we complimented each other that day and in the days to come. The tether between us was still there months later, when we compared mullet lengths and discussed the best methods for styling our uneven locks (headbands, big earrings, tiny ponytails). It was still there years later, too, when we exchanged five-year-anniversary texts and stood back in awe at how the experience had changed us.

At 14, a buzz cut was liberation. It was something in the indescribable feeling of clippers going over your scalp, of standing up from that chair in the gym suddenly lighter, of going for a run with the wind rustling through what remained of the hair on your head. It was just hair, but it was more than that, too—it was freedom from pressures to look and present ourselves a certain way, to fit neatly into the starkly gendered box of teenage girlhood. In this tiny act of subversion, it was as if we suddenly discovered that the rules and expectations for girls our age were a sham, that we could get far more out of skirting them than we could by playing along. Gone were the long tresses, the braids and hairbows and hair twirling as a flirting mechanism. After that day, our femininity felt spiky, unexpected, ​radical​ even. It was what we decided it was.

And then, buzzing was a choice I made to change myself. It was a choice that felt grown-up, that adults seemed to respect, and it opened up a world of other choices. For so long, I had relied on my hair to distract from the features I didn’t like as much—the nose I’d inherited from my grandmother, the freckle on the corner of my mouth—and I’d quietly accepted the person who I was as if it had been assigned to me, as if I was predestined to be a frizzy-haired, low-ponytail-wearing cross-country girl. Now that it was gone, I was surprised to find that I didn’t feel naked so much as unburdened. Like I had an opportunity to redefine how I wanted to see myself and, by extension, who I wanted to be. I began to observe the things I admired in other people, their easy laugh or attentive listening, and strived to emulate them in my own actions. In some ways, it felt like I was being reborn into the world, suddenly an independent being.

A haircut functions as an external cue, an outward shift that causes observers to note a difference. People seem to assume the confidence of a person who gets a drastic haircut. When the outside world reflects that back at you, it becomes far easier to embody. As I walked into my classes the next day, I knew heads would turn, eyes would be on me, and I didn’t mind. I stood up straighter, held people’s gaze, strutted as much as an awkward, lanky, graphic-tee-wearing teenager can strut.

Whenever I say that I used to have a buzz cut, usually after someone requests to see a picture, people almost always lament that ​they c​ould never have a buzz cut. ​They​ would look terrible, citing their square face or weirdly shaped skull or sharp nose. I thought that too. But here’s the secret: everyone looks good with a buzz cut. I mean, it’s just your face. Your hair can’t look bad if you don’t have any.

When I feel anxious or restless or like I’m spiraling out of control, I cut my hair. It doesn’t have to be a buzz, just enough of a trim to tap back into that freshly-shaved confidence. I feel it coming before it happens. I get this dizzy recklessness, some strange humming energy overtakes me and before I know it, I’m standing in the bathroom on the third floor of North Caswell Hall, holding scissors in my hand. Or, it’s senior year of college and I don’t know what I want to do with the rest of my life and now seven inches of my hair is scattered on the floor of a randomly chosen barbershop on Wickenden Street. Invariably, I stare giddily at my reflection in shop windows as I walk home alone in a post-haircut glow, feeling lighter and renewed once more. The tiny hairs scattered over my neck and settling into the divots above my collarbones are all that remains of my former self.

This is the reason that my hair hasn’t stretched much past my shoulders since I graduated high school (my hair did, in fact, grow out in time for college). I will always prefer a change over waiting to see long locks in some far out future. In the most literal sense, a dramatic chop allows me to change the way I look at myself, and I use it to spur change in other areas of my life. It walks the line between control and careless abandon, a deliberate choice to let go. Feeling overwhelmed? A bob can help with that. Need to make a life decision? How about a pixie cut? I’m running out of inches to work with, but I can always fall back on the buzz if all else fails.

MORGAN FLORSHEIM B’20 would like to give you a haircut.