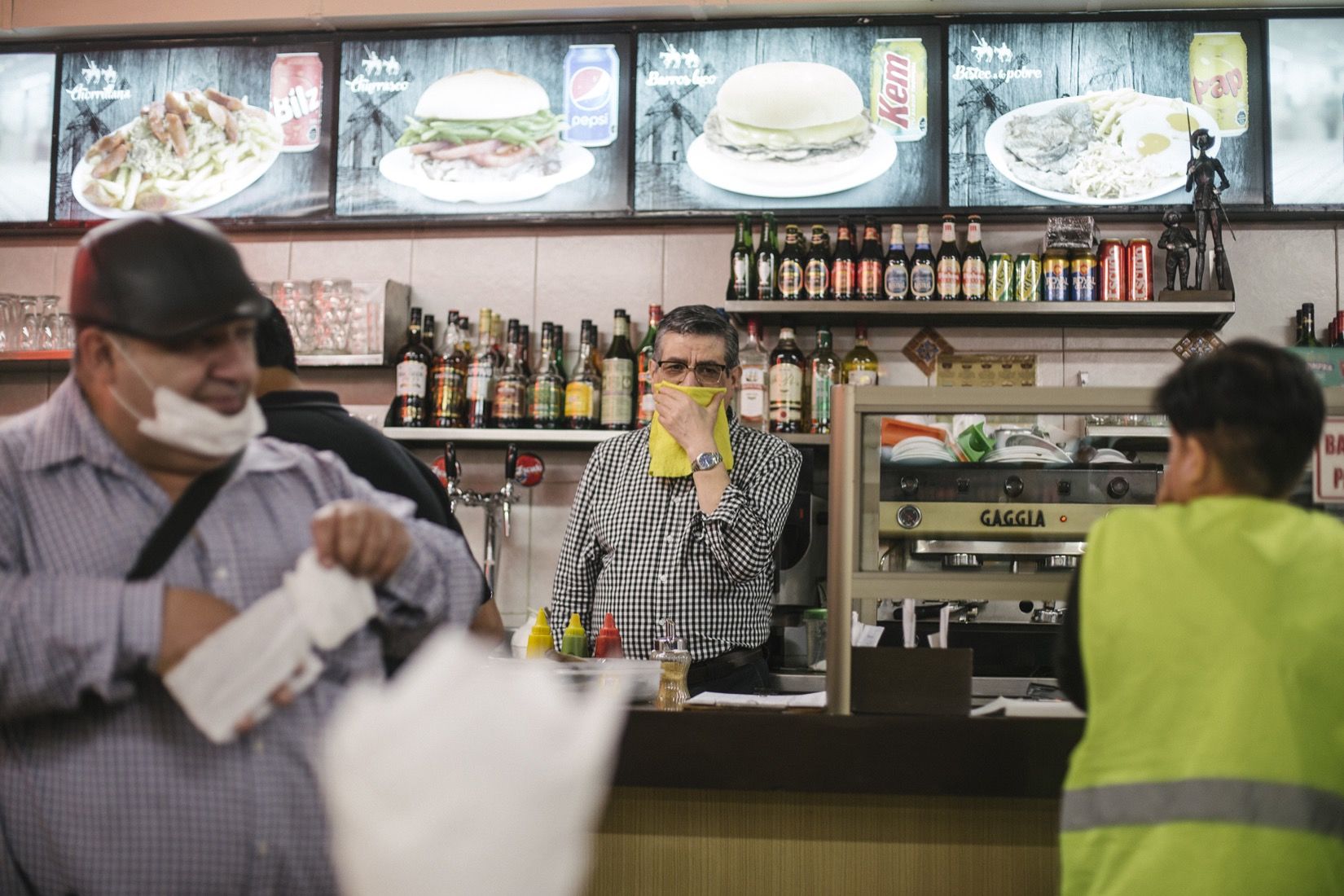 Chile has long been heralded as one of the most prosperous countries in Latin America and an example of global renown for the success of its neoliberal economic model. Yet Santiago youth protesting a metro fare hike in mid-October set off a nationwide wave of popular mobilizations. Since then, Chileans have taken to the streets out of discontent with the status quo, namely a system of governance unresponsive to their basic social and economic needs. This has been the largest wave of protests in post-dictatorial Chile, with marches that have reached 1.5 million participants in the capital alone. As these demonstrations have been violently repressed by police forces and the military, at least 22 people have been killed. The National Institute of Human Rights has so far filed 458 complaints against the government for torture and cruel inhuman treatment, and 88 for sexual violence. Over two hundred protesters have been shot in the eye by police with rubber bullets, and international watchdog groups like Amnesty International and Human Rights Watch have identified state policies expressly intended to harm protesters.

We sat down with PAULA PACHECO SOTO B’20, former Independent news editor and an organizer of the movement in solidarity with Chilean demonstrators on Brown University’s campus, to discuss her views on the recent movement. Earlier this month, Paula organized and participated in a panel at the Watson Institute entitled “Chile Despertó: Understanding the Social Crisis in the Latin American ‘Oasis.’” The panelists, including Paula and other academics and activists, discussed the legacies of neoliberalization in Chile, especially with regard to education and Chile’s history of student activism, as well as the role of collective memory in social movements. The Indy spoke with Paula about her perspectives on recent political developments, the politics of the protest movement, and the incorporation of women’s and Indigenous peoples’ voices in the movement.

The Independent: Professor Daniel Rodriguez opened the panel by situating the recent protest movement within the broader context of the role of historical memory in Chilean politics since the end of the Pinochet dictatorship. Do you agree with him that the emphasis on accountability for individuals during the dictatorship who committed human rights violations has meant, in turn, continued impunity for the deprivation of social rights?

PPS: Yes and no. I don’t think the project of historical memory has necessarily been about accountability in the first place. Instead of accountability, Chile’s transitional justice model was one of convivencia, allowing both perpetrators and victims to coexist within the new democratic project created after the dictatorship. In that sense, I think the methods of supposed accountability were just gestures seeking to reassert Chile’s democratic success at the international level, rather than meaningful changes to bring peace and reparations into the lives of victims of human rights violations. Take the Rettig Report, which was a truth commission created in 1991 to investigate human rights violations under Pinochet and suggest reparations to victims. Although the report confirmed thousands of cases of human rights violations, including assassinations, it only led to a few convictions, and those with political responsibility for these systematic abuses were never held accountable.

But I think Professor Rodriguez is absolutely right in that recent governments’ emphasis on upholding an image of democratic restoration through the crafting and molding of a historical memory has obscured the structural harm of the dictatorship, especially in leaving the neoliberal economic model unquestioned. Such superficial changes also neglected the spearheading of a much-needed process of social reconstruction and rethinking how people relate to the state and each other.

In many ways, I think that what we are seeing today in the streets, what Chile has been experiencing for over a month and a half now, is the transition we never had. It is a painful confrontation with our past in its economic and social dimensions. While that is a difficult and contested process, at least it is not the aided, fabricated transition we once had.

The Indy: Among protestors, how do demands for change in Chile diverge? At the panel, you spoke about the change in progressive discourse towards doing “away with the whole system,” as opposed to reform within existing political arenas. Is this realistic?

PPS: People are not interested in a merely representative democracy anymore. We have to understand the current political moment as still part of the transition from dictatorship—people are rejecting the economic (and political) dictatorial model, even if by optics we live in a democratic nation. On November 14, people commemorated a year of the assassination of Camilo Catrillanca, a Mapuche weichafe who was murdered in cold blood by the militarized police, the Comando Jungla trained in the United States and Colombia. When the police kill with impunity—not only in the context of the recent social mobilization but also consistently for decades before—what kind of democracy are we talking about? When the processes of truth and reparations of the dictatorship were nothing but cosmetic, what kind of democracy are we talking about? When we still have a constitution written in the 1980s behind closed doors, by the accomplices of a dictator?

Any talks with the president have failed so the movement has become increasingly unaffiliated with formal political parties. Since the 2011 student movement, which demanded an end to privatized, marketized higher education, we’ve seen the proliferation of extra-institutional spaces like cabildos and popular assemblies based on residential areas.

The Indy: In mid-November, President Piñera announced that there will be a referendum in April 2020 regarding the creation of a new constitution. Do you view this development with optimism?

PPS:  No. I am maybe glad that there is something to work on, but I do not trust this government and do not trust any deal they strike. Of course I am saying this as a person who is in the United States—I cannot physically participate in the streets and don’t have to carry the physical and emotional toll of being on the streets everyday for a month. But still. We should not forget that we need “peace” because the President himself declared war on the people on October 23. On Friday, after this “deal for peace” was written between the opposition and government, Abel Acuña, a 29-year-old protestor, died of a heart attack in the midst of a protest because the police prevented paramedics and the ambulance from saving his life by using rubber bullets, tear gas, and water cannons against them. Who is this peace for, then? It is not peace just because the government wants to call it so. They don’t want peace, they want passivity—without a real compromise to truth and reparations, to accountability.

And, even worse, they want us to wait until April. They are blinded and indolent to the urgency of the demands of the people.

I am still going to vote in April, but before that, I hope the scenario radically changes. We owe it to the young people who began this revolution. They need to be able to vote, a right not provided to young people under the age of 18 under the current deal. We need to include parity law for different genders and quotas for our Indigenous people to have a central role in this new constitution. The Constitutional Assembly needs to be delinked to the political establishment and constituted from territorial organizations, civil society, and everyday people. It must reflect the feminists, queers, grandparents, secondary students—all of those who have taken to the streets for the last 20 years in Chile. We cannot fail in this new transition as we did in 1990. And part of that is a process of true accountability that overthrows the old political establishment through democratic means.

The Indy: Last Monday, November 25, was the International Day for the Elimination of Violence against Women, for which hundreds of protestors in Chile took to the streets. What has the role of women been in this current movement so far? Have demands for gender equality, including the end of gender-based violence, been prioritized?

PPS: I think feminists have, without a doubt, been at the forefront of the social mobilization, and have done incredible work to bring a gendered understanding of social rights and political participation into the discussion. Same goes for sexual orientation and gender minorities. Feminists have been challenging patriarchal and machista culture within the movement, while refuting the idea of women being in the sidelines of political transformations. That has meant positioning demands for gender equality, and sexual and bodily rights, including the right to abortion. That has become increasingly relevant as state repression continues, because the bodies of women are especially policed, surveilled, and assaulted. There is sadly plenty of testimony to that, as women have been forced to strip upon being detained by police forces, and they have experienced non-consensual touching and threats of rape at alarming rates compared to their male counterparts.

Still, the demands of feminists aren’t just focused on sexual and bodily rights, but encompass the fact that women suffer some of the worst consequences of this “precarization of life” under the current economic model—charged with oppression in the household, at the workplace, and in relationship to state. Chilean women are more likely to work in precarious jobs, without a contract, making around 30% less money than men, while also being solely responsible for household chores and childrearing. All of this in a context where abortion is available only in extreme life or death circumstances and the state fails to provide adequate support for women in terms of maternity leave and childcare. That is why feminists are not fighting these fight alone, but in coalition with workers’ unions, territorial assemblies, and the people in the streets.

The feminist fight obviously translates to the upcoming constitutional process, and feminist coalitions are emphasizing the need for this text to be written from a gendered perspective, to recognize and guarantee sexual and reproductive rights, and to ensure a life free of violence for citizens—a process that is encompassing of the diversity of families that exist in our country. I think more broadly, when thinking about the revolutionary process in Chile today, it has to center these perspectives (feminist and dissident perspectives, for example) that are really about reconfiguring relationships of power, rather than just seeking particular concessions from the current political and economic order.

The Indy: How has the current movement incorporated the demands of Indigenous people in Chile?

PPS: That’s a tough question—I don’t know if I have a good answer or if others would agree with me. I think broadly, people in the streets want to reclaim and make spaces for the Mapuche struggle. There is a sense that the violence experienced by people in the streets today is what the Mapuche have experienced for centuries, increasingly in the last few years with the militarization of their ancestral lands, and hence that our calls for the government to be held accountable for human rights violations must encompass the claims of Indigenous people to justice and self-determination. But of course, it is hard to put that into practice, and it is a fine line between inclusion and cooptation.

In more concrete terms, there is an attempt to ensure quotas for Indigenous participation in this new constitutional process. Currently, Chile does not have a system of quotas that ensure Indigenous political representation, even though there are Indigenous parliamentarians who have been elected. Of course that would mean including them in a process that still centers the Chilean state and the national project, and that is not necessarily in the best interest of the independence and self-determination of Wallmapu, the territory the Mapuche inhabit. The current social mobilization cannot turn into a nationalist movement, and instead must work to reframe ideas of territoriality, belonging, and people’s relationship to politics and the state. 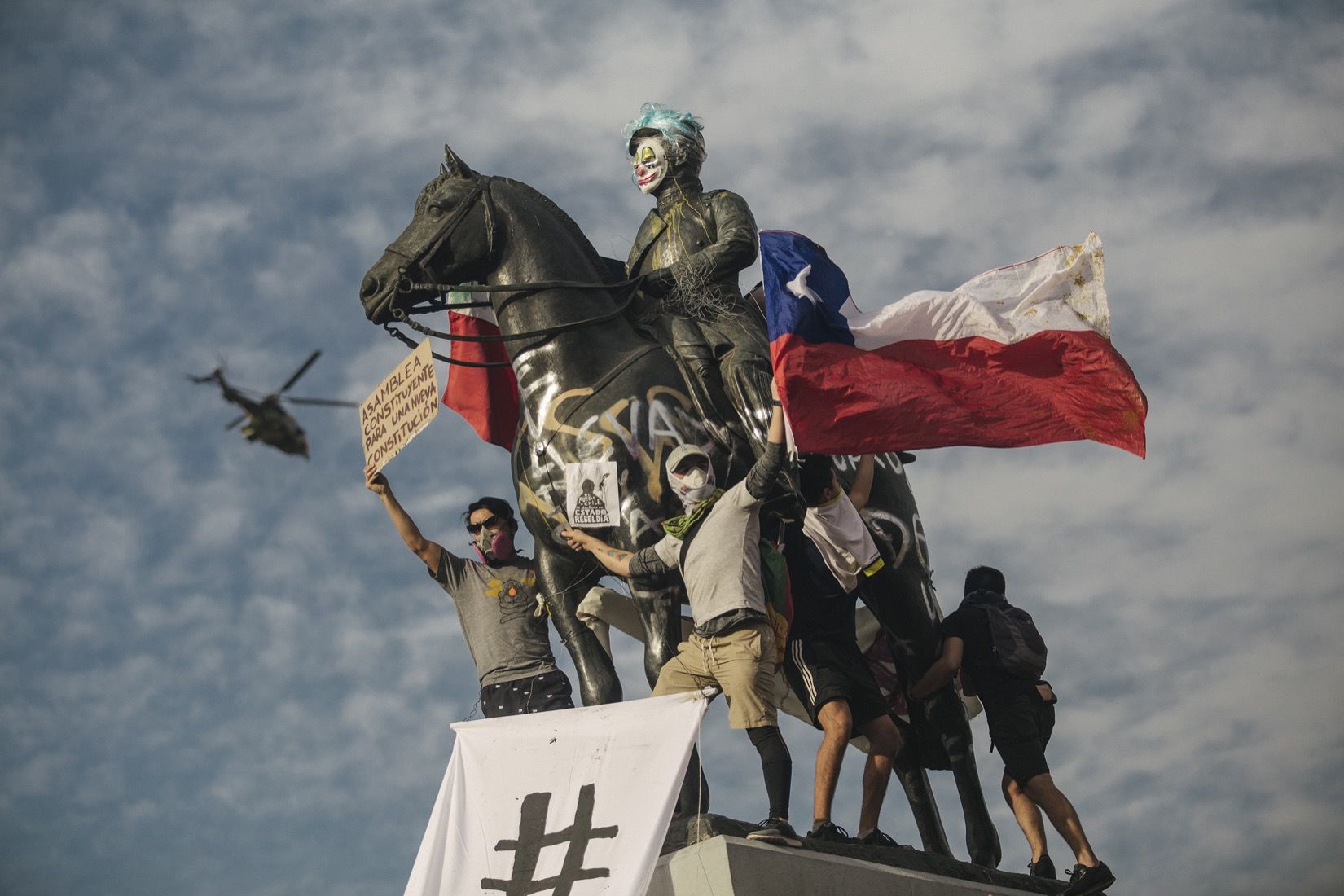 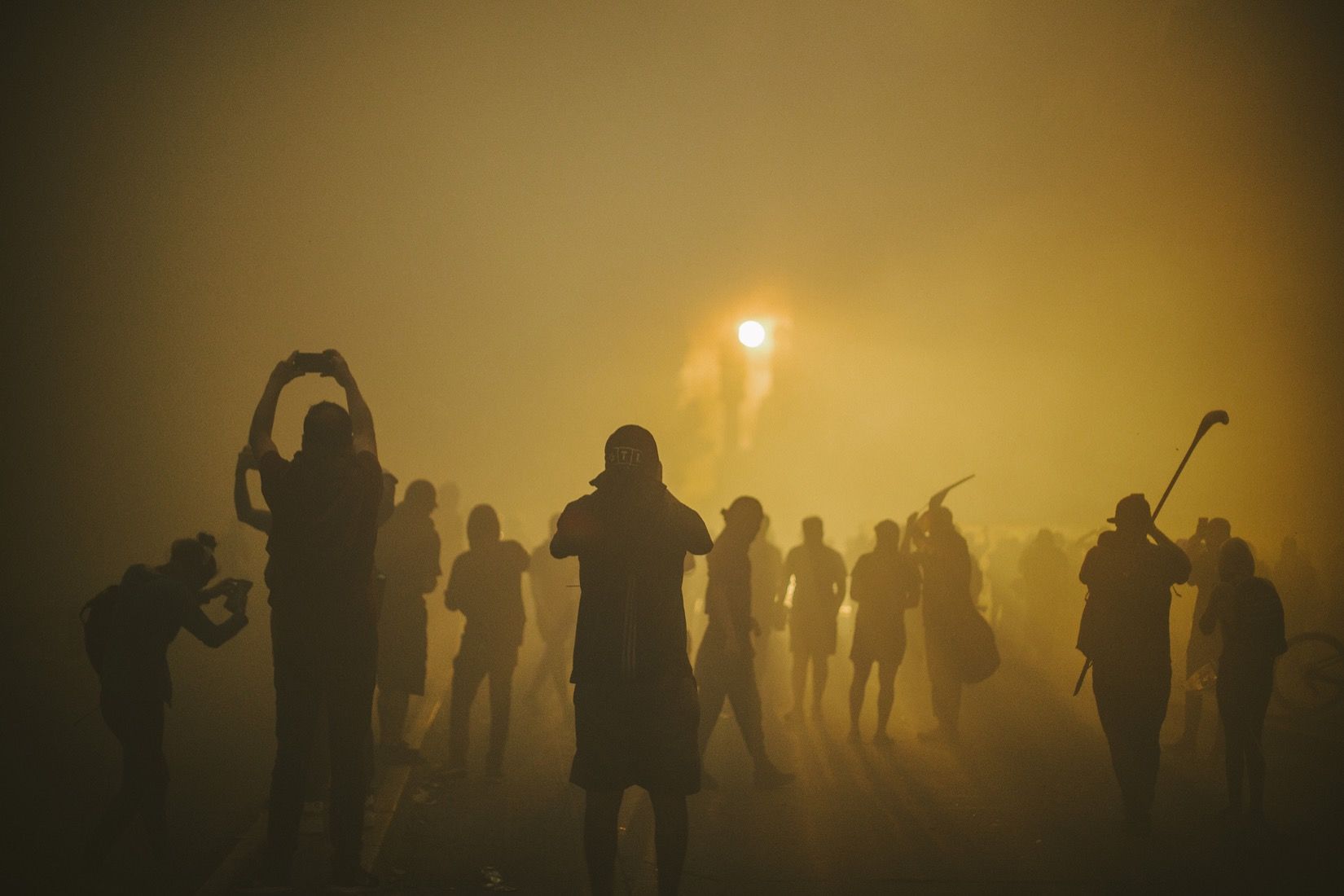 October 28: I'm still thinking about this light from Monday. Let everything burn. 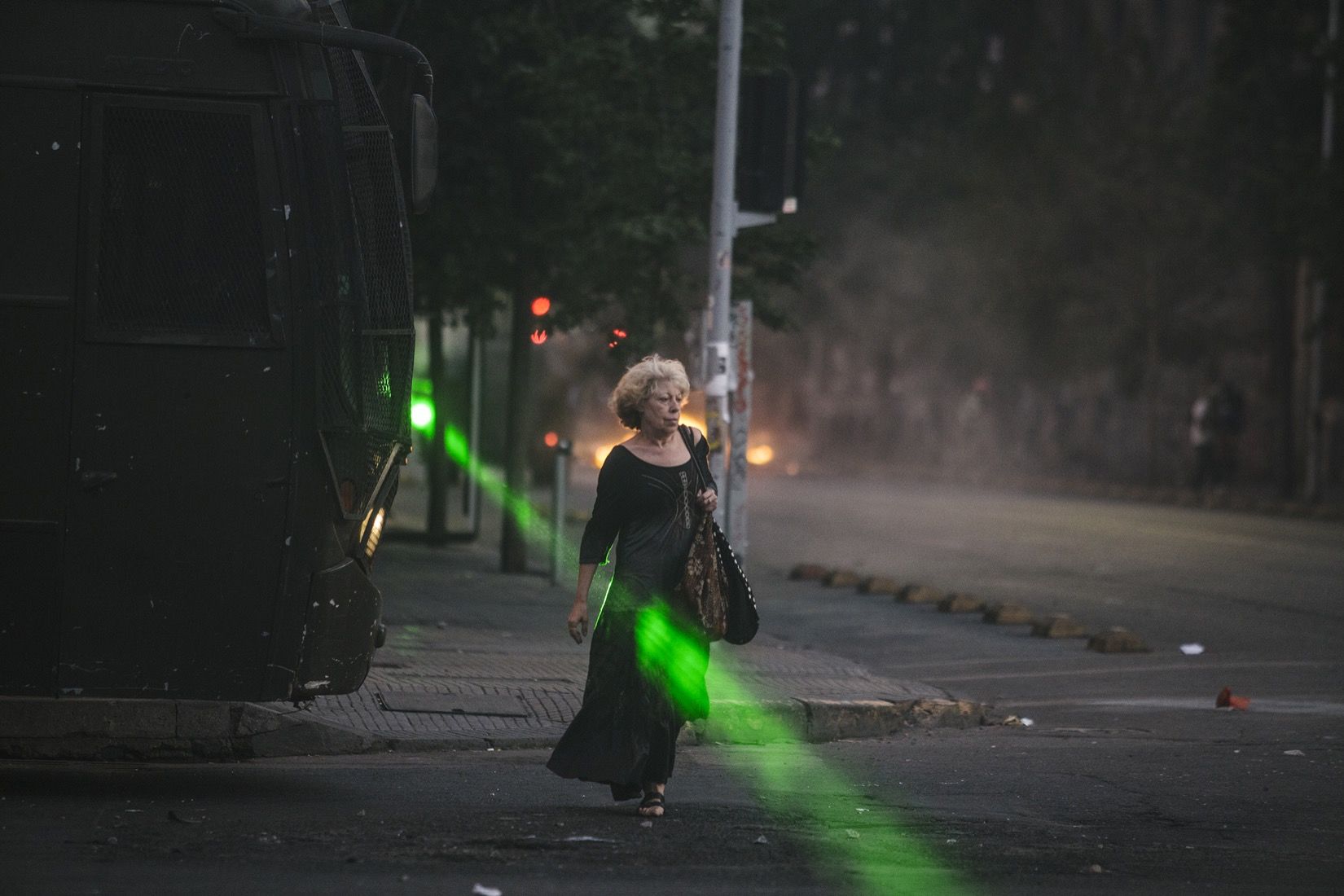 Photos and captions by @diegoreyesvielma