We, the undersigned alumni of Brown University, write to express serious concern with the troubling atmosphere and recent heartbreaking student experiences at the The Brown Center for Students of Color (BCSC), formerly known as the Third World Center (TWC). Over the past five months, the Campus Life administration has failed to follow BCSC-established policies and practices and has subjected students to broken promises and poor and inconsistent communication. This lack of transparency, coupled with the administration’s refusal to include students or staffers in Center decision-making, undermines the TWC/BCSC’s mission to be a space for and by students.

Our deep sadness about the current situation stems from our own memories of the Center during our time at Brown. For many of us, the Third World Center was the first safe and truly intersectional space that we had ever experienced. It was the place where we felt heard, where we could support each other, and where we built relationships with some of the best friends of our lives. Many of us served as student staffers at the Center: We were vital to its programming and proud to be stewards of its dynamic culture. The unique configuration of the TWC enabled us as students to practice shared governance, community-centered leadership, and develop a living practice of trust, transparency, and accountability—a practice of transformative justice—that built the foundations of our future selves.

The experiences of current students, however, suggest that in stark contrast to the many positive lessons and life experiences we gained at the Center, students today are learning different lessons. Here is a brief summary.

After seven years of service to Brown, the director of the Brown Center for Students of Color was suddenly terminated from his position with only two weeks’ pay in lieu of prior notice by Nicole Truesdell, his supervisor of 15 months. The reason given for his termination was underperformance and lack of leadership. Under his previous supervisor, however, he earned ratings of “exceptional” and “exceeds expectations” and had even won a campus-wide award for excellence in leadership in 2017. The director offered to provide documentation to human resources directly contradicting allegations made by Truesdell but was ignored or rebuffed by HR. Additional requests for an independent review were also ignored. HR went so far as to say that the challenge of a supervisor’s version of events meant that he was unfit to carry out his duties as director of the BCSC. This reveals a deep structural injustice in Brown HR staff policies. Regardless of how one feels about a particular employee, current HR policies provide no real grievance process for staff, leaving them vulnerable and sending the message that all of them are disposable. At the same time, students have witnessed an administrator repeatedly tout transformative practice while exploiting this broken process to summarily fire a beloved community leader.

In non-compliance with BCSC practice regarding staff transitions, Truesdell issued no notice to students of the director’s departure. It was only when students returned to campus to begin work on this summer’s Third World Transition Program (TWTP) that they were confronted with the shocking, undeniable fact that he was no longer at Brown. Many more students only discovered the director had been removed by receiving bounce back emails when they reached out to him for support. When asked, Truesdell said he left for personal reasons. The lack of communication and transparency led to more confusion and anger among the students. Students are learning that truth-telling can be optional.

BCSC Diversity and Inclusion Action Plan commitments require that 50% of all search committees be comprised of undergraduates. Administrators and faculty outnumbered students four to three on the original director search committee. By September, an undergrad student and a faculty member resigned due to concerns about the process. The remaining undergraduate tearfully reported “feeling really alone” and described the experience on the committee as “scary.” The TWC/BCSC legacy of shared governance is being broken. The BCSC cannot continue as a training ground for leadership when student voices can be so marginalized in the functioning of the Center.

After instructing students to attend her office hours for updates on the search and the future of the BCSC, Nicole Truesdell was missing from these office hours and remained unreachable for 10 days. After promising students a halt to the compromised director search and assuring them of collective involvement in next steps, she unilaterally selected and hired an interim director: Dr. Charrise Barron, a finalist candidate from the very search Truesdell had promised to halt. After a student sit-in, Truesdell made additional agreements to rescind the interim offer to Dr. Barron, to work with students on all decisions going forward, and to ensure that BCSC professional staff would be given supplemental pay for the extra labor they have taken on since the director’s termination. All these commitments have been broken or remain unfulfilled.

This disregard for student voice has persisted. Students have met with Truesdell’s supervisor Eric Estes and University President Christina Paxon. Both have refused to discuss any of Truesdell’s decisions or the controversy of the current interim director being a finalist from the ‘halted’ search. Instead, they continue to suggest that students hold “conversations” with Truesdell and Estes. Students are understandably wary of doing so due to Truesdell and Estes’ unwillingness take accountability for the damage they have caused to students and staff.

Ironically, transformative practice is still alive and well at Brown. This fall, current students at the Brown Center for Students of Color have launched two direct action protests, circulated a petition gaining over 370 signatures, published an op-ed and historical timeline, organized a BCSC staffer walkout, and engaged in numerous talks with administrators of Campus Life. They have led with a desire to understand, advocated for lasting change, and have met each other as well as administrators with radical compassion and undying grace—even as they continue coursework. This speaks to the legacy of the BCSC/TWC, the dedication of the professional staff, and the Third World Coalition whose struggle has always been to push the University towards justice. In this present moment, the Third World Coalition offers this administration an opportunity to learn again.

We implore the University to engage these students in concrete discussion and negotiation to mitigate the past and continual harm caused by recent university actions affecting students and staff. At this time, we additionally urge alumni group leaders to hold dialogue with current students and professional staff at the BCSC to create effective avenues of support. We envision this message will encourage alumni and other parties to support the current students and the legacy of the BCSC. We hope that Brown takes this opportunity to embody to its core values of integrity, responsibility, and service to the campus community.

CONCERNED ALUMNI B’88-19 urge you to sign their petition to support student activism and the BCSC. 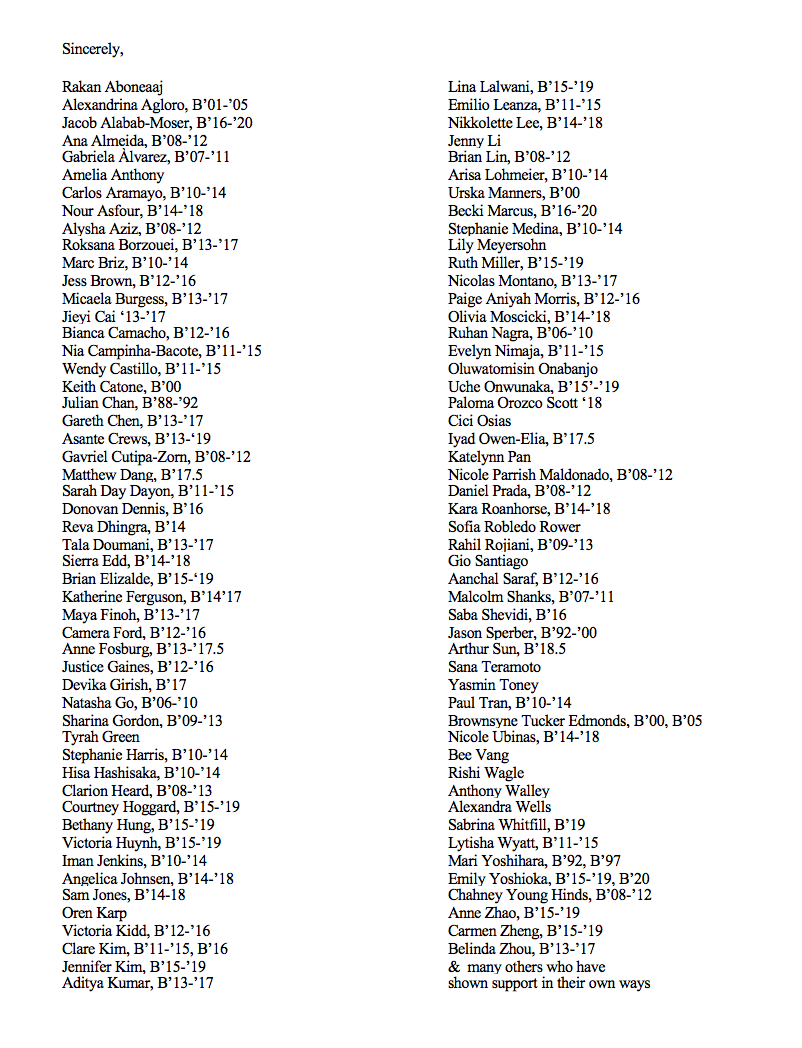