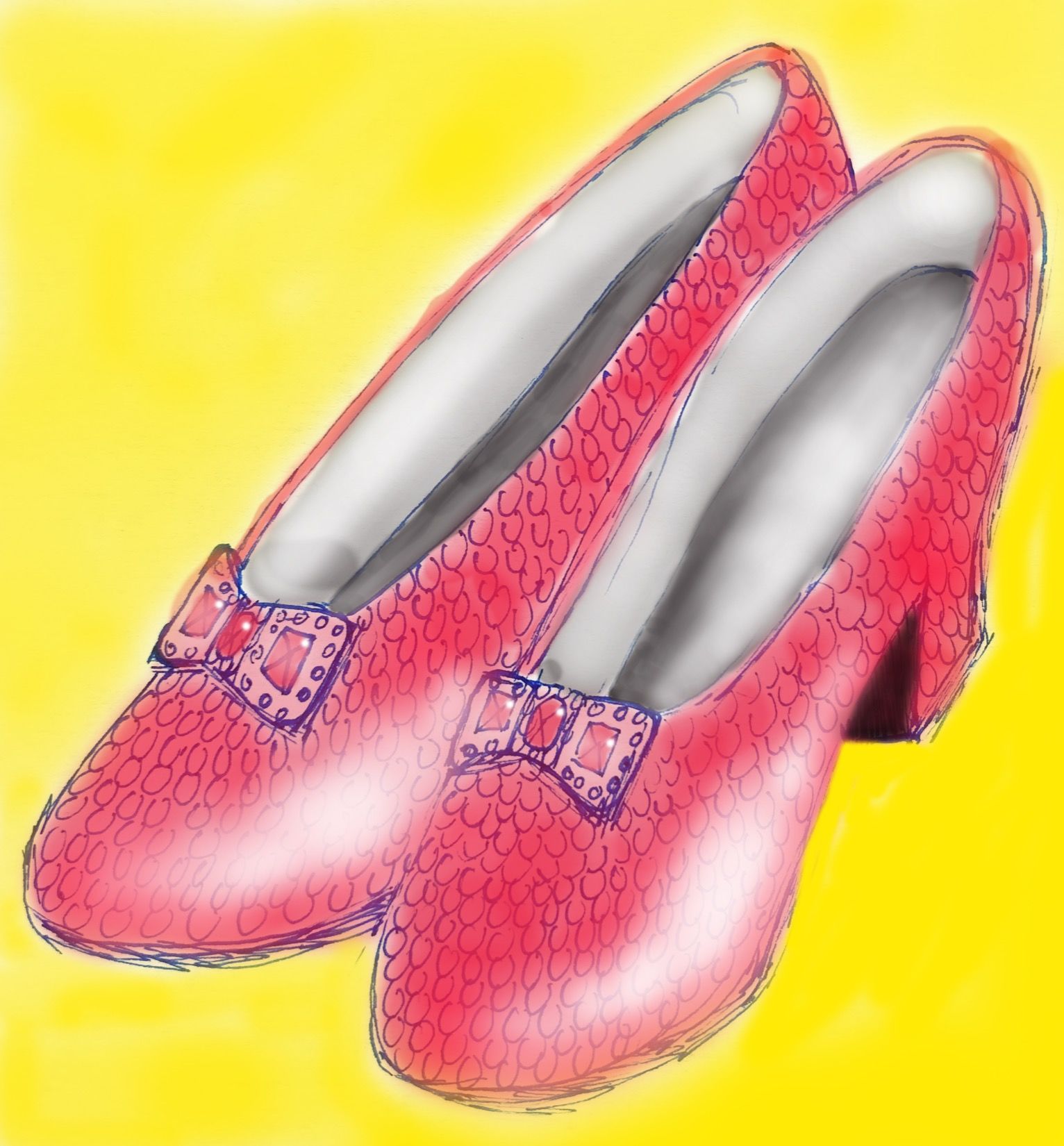 Every New Year’s Eve in Key West, the drag queen Sushi perches comfortably inside a glistening ruby high heel, so giant that it nearly engulfs her body. The massive wood-carved shoe is hollowed so that Sushi can rest her body against the insole, nestling her upper back into the curved edge where the foot’s heel would go, extending her feet into the toe-box. The exterior of the shoe is painted a deep red, sprinkled with silver glitter, competing for attention with the interior lining’s metallic gold. Every year, Sushi flaunts a glamorous new look, from lime green sequin-covered fishtail dresses to dark smoky eyes to wide-brimmed hot pink chin-strapped hats. Nevertheless, her iconic high heel seat remains essential to her performance, the same exact shoe returning each New Year’s Eve. As the shoe is suspended by two ropes several stories above the ground, Sushi showcases herself to the massive crowd below her, which is getting drunker by the minute, filled with white-bearded elderly gay men and young married straight couples hoping for a televised kiss. Central to Sushi’s campy excess is her invocation of the ruby slippers famously worn by Dorothy, played by quintessential gay icon Judy Garland, in the original film version of The Wizard of Oz.

In the beginning of the film, Dorothy sings “Somewhere Over the Rainbow” in response to her Aunt Em’s urging for her to find a place where she “wouldn’t get into any trouble.” The lyrics of the song point to a faraway land in which Dorothy can experience freedom in totality. Within the film’s narrative, it is a foreshadowing of her subsequent arrival in Oz. But on a conceptual level, Dorothy’s yearnings are an ode to a possible future, a place of utopia.

The present can be pervasively toxic, especially for queer people that remain trapped within the rigid dullness of understandings of gender and sexuality. For theorist José Muñoz, looking towards the future presents a solution to the restrictiveness of the present for queer people. Muñoz celebrates the realm of the future as a mode to anticipate a liberated world; in this conception, queerness becomes an ideal to strive towards, a pathway to freedom, or as he puts it, a ‘horizon.’ In simpler terms, Muñoz’s theories establish a queer politics that allow us to look forward to a future of widespread LGBTQ+ freedom. Whereas utopias are often dismissed as naïve pipe dreams, a future-focused queer politics reclaims utopia as a space to imagine the possibilities of liberation for queer people.

Back in her Kansas farm, alongside bales of hay and farming equipment, Dorothy sings of a place where “dreams that you dare to dream really do come true” and “troubles melt like lemon drops.” Her lyrics epitomize an optimistic longing for a utopic world, and in this way, a queer one. Notably, Dorothy does not yet have the ruby slippers; they exist in the hopeful future she imagines.

Soon after Dorothy completes her wishful ballad, a ravaging twister approaches the farm. Dorothy runs back inside, lying in bed and falling asleep as the arriving tornado lifts away her house, transporting it to the “somewhere over the rainbow.” The film dramatically shifts from the bleak sepia-toned Kansas to the vibrant technicolor world of Oz, and an awakened Dorothy steps outside, wide-eyed. Her house falls directly on the Wicked Witch of the East, killing the witch and leaving her ruby slipper-adorned feet hanging out. In response, the now-freed citizens of Munchkinland, along with Glinda the Good Witch of the North, perform an extravagant celebration of gratitude. As the Wicked Witch of the West arrives, attempting to recover the slippers, Glinda magically transports them to Dorothy’s feet. The technicolor dramatizes the slippers—doused in deep red sequins, the shoes glisten in the movie lights, strikingly contrasting Dorothy’s run-of-the-mill countryside garments. Dorothy has reclaimed the sparkling shoes from a figure of power, re-contextualizing a once-wicked object into a glamorous accessory. Importantly, The Wicked Witch of the West covets the slippers for their magical abilities. But when she tries to obtain what were previously her sister’s slippers, she gets shocked when she attempts to even touch them. The power of shocking evil asserts a vision of a magic that is politically characterized—the slippers can be thought of as untouchable by normalizing forces of power. Just as the rule of the Wicked Witch forced the Munchkins into hiding, leaving them with no choice but to conceal their colorfully eccentric culture, queer people are often forced to assimilate into mainstream culture. The slippers’ reclamation as a tool to repel wicked normativity presents a queerness that cannot be touched by heteronormativity. This may be an ultimate queer utopic dream: a queerness that thrives and cannot be undone, where expressions of gender, nonnormative sex, and queer cultural forms exist freely and invulnerably. In this world, homophobia and transphobia get immediately zapped in their path.

Nonetheless, the shoes’ most notable function is their ability to return Dorothy to Kansas. Not to be forgotten—Dorothy’s entire journey in Oz is driven by her desire to return home. In the end, she gets her wish: Glinda reveals that if Dorothy closes her eyes and clicks her heels three times, all while repeating “there is no place like home,” she will be transported back. Dorothy does so, though it is bittersweet, as she must say goodbye to her newly-formed friendships. When she arrives in Kansas, she awakes abruptly, as to signal that the entire experience was a dream. Notably, Dorothy’s slippers possess the power to send anyone to where they feel the most at home. This would be an invaluable tool for queer people—their given homes are often abusive or unaccepting, forcing them to find different ones and negotiate new structures of kinship. Thus, the slippers allow for a too often unreachable sense of belonging, serving as the medium between the present and a queer utopic future of newfound family.

However, this sense of belonging often transcends families and interpersonal relationships—the new cultures that queer people construct offer artistic and aesthetic dimensions of belonging. Heteronormative culture was not made for queer people, failing to imagine the alternative forms of romance, kinship, gender expressions, and sex that characterize their lives; in turn, queer people create their own. In her journey throughout Oz, Dorothy is met with an entirely new world, where she must construct new ways of living and relating to others in order to exist amongst its oddities. Her ruby slippers are central to the strange utopia of Oz, and her journey’s success depends on the learned navigation of their abilities. They are noticeably flamboyant, sequin-covered, and constantly shimmering—even possessing magical powers. These qualities mark the shoes as a camp object, especially when paired with cultural critic Susan Sontag’s comment that “Camp is the attempt to do something extraordinary. But extraordinary in the sense, often, of being special, glamorous.” The shoes achieve camp through contrast—their gleaming red deviates from Dorothy’s quotidian nature, and they demand attention within every setting throughout the film, establishing their “spirit of extravagance,” which Sontag calls “the hallmark of camp.” Camp has been historically significant for queer people, serving as an aesthetic language within art and culture—from the New York City ball scene to John Waters films—created for and only legible to other queer people. In this way, camp’s collective construction allows for a unifying function: camp becomes a new home for the aesthetically-attuned queer. As the ruby slippers transport to utopia, they do so with a sparkling wink.

In the moments before midnight, Sushi’s high heel drops into the crowd beneath her, which counts down each successive second. As the clock strikes midnight, Sushi screams “Happy New Year!” and pops a bottle of champagne while confetti canons douse her in a rainbow snowfall. As she steps out of the slipper onto a stage, she is met with a celebratory audience, kissing and hugging one another, all excitedly anticipating the future year. Sushi’s performance allows for a queer world to be made, mobilizing the colossal ruby slippers into a futuric gesture of queer joy.

EVAN LINCOLN B’21 is actually a good friend of Dorothy’s.