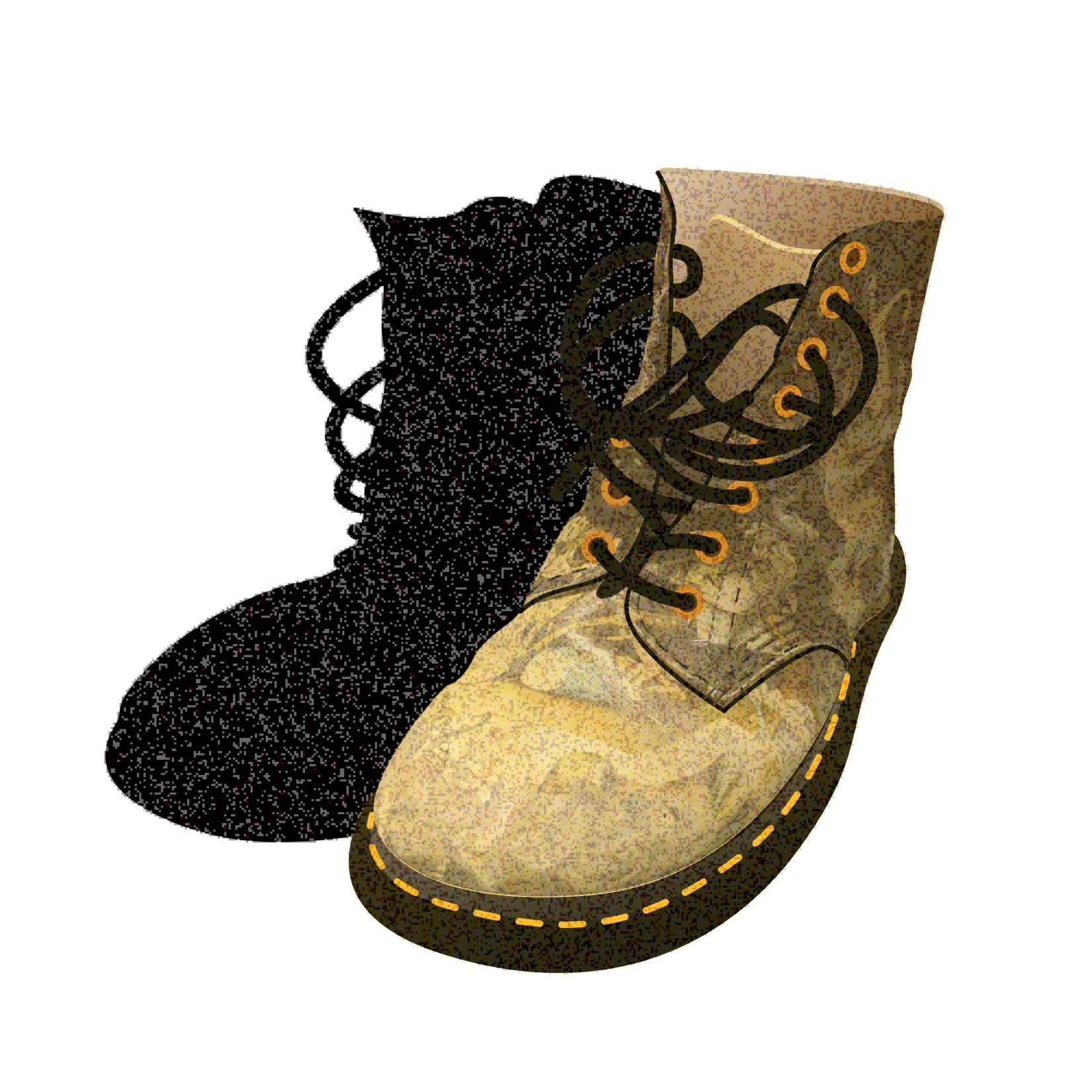 I got my favorite pair of Docs my sophomore year of high school—Pascals with portions of Hieronymus Bosch’s triptych The Garden of Earthly Delights printed on them. The design depicts the turn-of-the-15th-century Netherlandish idea of hell. Contorted nude figures strewn across the bleak terrain as a city burns in the background. A man decaying like a tree, arms twisted and chest hollow, looks out from the side of the boot, a bulbous musical instrument on his head. Above sits a blade with a pair of ears. On the inside of the foot, the city burns. A rabbit plays the violin on the toe—except you can’t see much of the violin now. On the top of the toe, most of the design is scuffed off. The same with the inside ankle, where the medial malleolus sticks out and forces the leather of one boot to rub against the other, fading the dark scene to white and then tan.

At the end of my freshman year of college, I sat down at my desk every morning to do the laces. I used to tighten the laces slowly, drawing the stiff sides of the shoe together and feeling the new leather against my foot. By my third pair of black shoelaces, I didn’t even have to look. The aglets began to fall away. One had been replaced with a rolled piece of clear tape. Still, putting on my boots was an act of reverence, a prayer. Lacing them is a ritual, opening space for me to pause and consider my day and appreciate the small things, like the feeling of frayed laces pulling soft leather closed around my foot.

Traditional subcultural analysis of Dr. Martens boots focuses on how the boot signals group belonging. Their lineage of subcultural usage traces from working-class British skinheads to a wide variety of modern-day queer subcultures. In short, subcultures, usually non-conformist in relation to broader society, use Dr. Martens to consciously perform their difference from the norm—or so goes the traditional argument. This argument emphasizes appearance: the need to look different in order to set your subculture apart from the norm. But I wanted to focus on something broader: queer masculinity. The subcultural lens is so focused on appearance and grouping that it doesn’t consider how objects like Dr. Martens might interact with people beyond the visual.

To be clear, a large part of the appeal of Dr. Martens is their appearance and the queer masculinity they have the potential to signal. But queer masculinity isn’t just a look, an outward-facing sign. It’s about how the way I look reflects how I feel (or want to feel). It’s about how the way I present myself can’t be separated from the broader context in which I write myself into being.

Because, at the end of the day, these shoes are manufactured by a large corporation, a corporation that is happy to exploit queerness in its advertising while participating in all the harm of capitalism. Scholar Cath Davies, analyzing the company’s 2011/12 advertising campaign, found that the brand stresses self-expression and heritage apolitically, invoking an anti-conformist stance abstractly in a manner removed from political context, rebellion safely contained in a language of individuality and creativity. This brand strategy extends to their relationship with queerness.

When I consider my own queer masculinity in relation to my Docs, the study of my own experience with the shoes becomes an overlapping collage of presentation, self-realization, marketing, and leather. And so I asked: How do the boots make me, and how do I make the boots?

I started by drawing from Michel Foucault, whose technologies of self spoke directly to my experience with Dr. Martens. For Foucault, technologies of self are specific, conscious practices by which subjects constitute themselves through regulating their bodies, thoughts, and behaviors. The goal is transformation. But technologies of self only work to help people transform themselves if that transformation makes sense to the broader society. Through technologies of self, individuals are able to represent themselves in ways that match their self-understandings in relation to society. Through modification of objects, people modify themselves. As a preteen, I craved a training bra because our society associates bras with womanhood. Wearing a training bra would make me a woman, would transform me into the teenage girl I saw on the TV, would shape my changing body into something legible as “woman.”

In that same logic, I wanted to wear Dr. Martens boots because the people I saw wearing them, in person and online, maybe didn’t feel like they had to wear a training bra to be a woman correctly. In my eyes, the people that wore Dr. Martens were unafraid to be themselves, especially when that fearlessness meant accessing a masculinity I’d not yet seen as a suburban-dwelling preteen. I hadn’t quite made the connection between being unafraid to dress and behave the way I wanted and being trans. When I thought of men, I thought of pop stars and football players and preteen boys who hadn’t learned what deodorant was. I didn’t want that! But I saw people presenting their own takes on masculinity, their butchness and their transness and their Docs, and I was enthralled.

Judith Butler is one of the gender theorists I find most useful when thinking through my own transness. For Butler, different contexts and systems, including gender and sex, determine how the body is understood: “bodies only appear, only endure, only live within the productive constraints of certain highly gendered regulatory schemes.” Both social gender and biological sex are constructed, and the process of assigning a sex brings the object into being. For Butler, sex is projected through the manipulation of physical signs like secondary sex characteristics. There is no way to distinguish between what is materially true and what is culturally contingent, and the body only becomes legible through these signs. Gender is a question of doing, a process that must be repeated over the course of the subject’s life. Queerness and transness cannot be reduced to a clear subcultural analysis that just sees appearance. Everyone is always doing gender, cis or trans, whether they realize it or not.

Gender has a rhythm, one I’m still learning how to manipulate. When I first put on my Docs, they were an instrument I had not yet learned how to play, fumbling through the scales of my budding masculinity. Today, almost five years later, I’ve begun to play the songs I want to hear from myself without the effort they once required. I’m always constructing my own masculinity through footfalls and collared shirts. Gender as a process. Rhythms, repeated.

But rhythms can be appropriated, crystallized, made into marketable identities. The Dr. Martens brand has promoted their connection to the LGBT community through more openly in the last few years, culminating in the 2017 release of a collection of rainbow boots with proceeds going to the Trevor Project. Their advertising video "#worndifferent" presents images of rebellion and subculture, without specificity or radical politics. This is directed at the LGBT community, not the queer community—rainbow capitalism, not liberation. #worndifferent presents the Dr. Martens shoes as enabling a generic resistance to cultural norms but remains acceptably revolutionary.

The brand’s timely acknowledgment of queer people's usage of Dr. Martens matches this image of acceptable revolution. By 2017, same-sex marriage had been proclaimed a victory of equality under the state, of working within the system to achieve acceptance. The title of the campaign invokes the “born different” idea about LGBT identity, wherein queerness is something innate and should be acceptable because it cannot be changed. At stake is the growing acceptance of certain queer people into the dominant capitalist society while other queer people, especially those holding multiple marginalized identities, remain subjects of violent exclusion.

I no longer think that the shoes are the endpoint of my coming into queerness. My usage of them remains in tension with their brand identity of LGBT acceptance, their apolitical respectability. I’d like to believe the wearer shapes the boot as much as the manufacturer, and the boot in turn shapes the person. I chose to be trans once I realized that womanhood was an ill-fitting suit and modified myself with Dr. Martens—the Butlerian notion of gender as negotiated and constructed through repeated action. Dr. Martens have allowed for my self-exploration and self-realization, shaping not just my outward presentation but my concept of self. My queer masculinity is not innate but continually realized and affirmed.

Everyone uses their clothing to construct their own gender, and I’ve long been using Dr. Martens to construct mine. The repeat lacing of my boots, the way the boots have shaped to my feet and my feet to the boots, is an uncanny parallel to my coming into masculinity. I’ve long absorbed various images of what masculinity does, can, or could look like, but the act of embodying that masculinity in myself is always a process of reshaping, of taking stiff leather gender roles and softening them around my body, lacing them tight so they don’t fall off.

I’m a junior now, and the shoes have been retired into work boots. The leather is soft and folded in on itself, the traction nearly gone. The toes are speckled with paint and wood stain, traces of theater sets built over the last two years. Still, putting on my boots is a prayer. I do not think, but do, letting the motion begin my day as I pull the worn sides tight. The wrinkles are permanent and shaped around my foot. The leather has caved in on itself around my ankles as I pull it in to fit, and the tongue cannot be unwrinkled. The sole has worn smooth on the ball of the foot. Reaching into the inside of the shoe, my fingers brush over the craters left by my toes, the depression of the ball, and the ridges in between. By now, the wear pattern reinforces my poor walking habits, and I have to consciously work to roll my foot correctly; the boot yearns to push my foot back into high school.

Here’s where my boot and I disagree—I don’t want to go back to high school. The end of sophomore year was when I came out for good, cut my long hair off, and started making people listen when I told them I wasn’t a girl, not anymore. It was not just the Docs—despite how important they were (and still are) to me. But Docs stand out, especially Docs with tree-men and flute-birds and sinners all in Hell. Docs made my steps sure and my stride wide. I may not have passed as a man yet, but at least I had an awesome pair of boots.

FINCH COLLINS ’21 has his Docs-clad feet up on the radiator in the Rock.