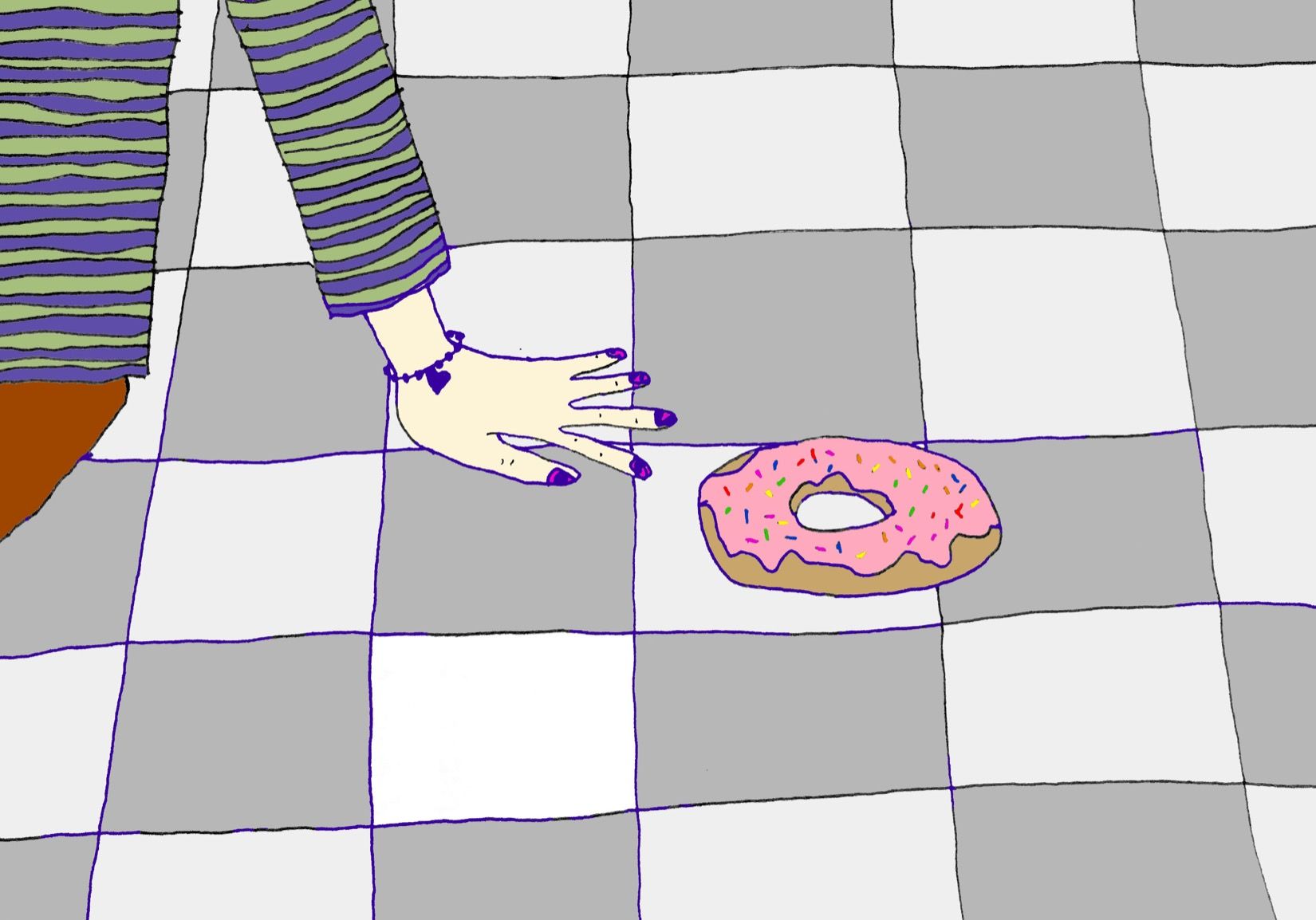 “Do you want to touch tongues?” Ella asked me. We sat underneath one of the fold-out plastic tables boasting boxes of frosted Dunkin Donuts, instant coffee and hot chocolate packets, and plastic cutlery. She had powdered sugar around her mouth and it was getting stuck in white clumps in her flavored Lipsmackers lip gloss. I had a pink-frosted plain donut with sprinkles in my hand, the standard, bland-but-pretty choice of a nine-year-old who’d snuck out of her Sunday School class to “use the bathroom.” We were on our second round of donuts for the morning.

Ella and I could get away with ditching catechism every other week at most and preferred swinging on the banister of the wheelchair-accessible ramp near the bathrooms. Our hands clamped around its blue chipping paint, leaving sticky, sweaty marks on the cool metal as we treated it like a set of monkey bars. I’d been able to hang from my knees since I was little, letting my pink-frosted fingertips brush against the grimy linoleum floor.

Saint Peter’s Church basement was the combination of sterile and dirty that only a church basement could be. It looked like a hospital corridor and smelled like a soup kitchen, with fluorescent beams tanning us paler, and consistent hair and lint balls in every corner along, with mouse droppings and the occasional lost earring, which Ella and I would collect when we ditched class and hide inside one of the bibles that lived in a cabinet off to the side.

I bit my donut. I didn’t want to touch tongues. In fact, I wanted to touch tongues with Adam, the only boy in our level. Although I only saw him once a week, sometimes less if my family went upstate to visit my grandpa, I spent every second during Father John’s homily staring at the back of his head. His family sat two rows in front of us, on the other side of the aisle, where I had a clear view of his dirty-blonde curls brushing against his neck and could see the shadow his lashes cast on his cheekbone. I looked forward to this all week, and even brushed my hair on Sundays, in case he ever looked back.

Although he was eleven, he was in the same catechism class as Ella and me. It was a small, downtown Catholic Church, with few parents that made their children listen to the Lord’s word as lectured by volunteer mothers who were passionate about Jesuit philosophy. So, we were all grouped together. After mass, sitting in the basement classrooms all of our Sunday School peers were trapped in, I’d stare across the table at Adam’s mouth, trying to get a glance of the purple rubber bands on his braces. I wanted to ask him about them. Why purple? What will your teeth look like when it’s over? Sometimes, bits of donut (or if it was bagels that day) bagel would get stuck in the braces and I felt like I knew a secret about him that even he didn’t know.

I swallowed my bite of donut. The underside of the table above our heads was dotted with chewing gum and metal bars crisscrossed, allowing it to be folded up and stacked in a corner after we all went home or out to Sunday brunch with our families. “Okay,” I said.

“Yeah,” I said, curious. She put her half-eaten donut down on the bare floor and I was disgusted, but ignored it as we scooted toward each other. I held my donut out to the side, protecting it from contamination, and followed Ella’s lead as she extended her tongue. With our eyes open, our tongues met for a second. I’d expected it to be warm, because people are warm, but it felt like wet nothing. I didn’t taste either, as we both tasted of the same donuts. It just felt. I pulled away. “Eww,” I said, and giggled.

From What I Can Remember

We went to the Cloisters—took the train up as far as it would go. I watched her point to different pieces of art, watched her hands more than what they were gesturing towards. Her wrists were so small I got distracted thinking about fitting them perfectly inside binder rings—opening and closing a three-inch metal jaw around them again and again. She was like a cartoon character  who had figured out what a flesh wrist looked like and from there had built a body. She was anything but. She was magnetism, the things in your room that you never open.

In fourth grade, there were three gardens in the front of the schoolyard: one for herbs, for vegetables, for fruits. We buried the two class fish one at a time, months apart, in the herb garden. The first one among the seeds, the second underneath the broad parsley leaves. Our teacher procured two white stones for us to write their names on and use as tombstones. What she had overlooked was the number of times she’d bribed us with the honor of naming the fish, so one of them had at least four, the other six, names in contention for the spots on the stones. At my suggestion, we wrote down the dates of their deaths in silver sharpie instead.

I woke up to a man sitting on the edge of my bed and taking my picture, but when I opened my eyes it was just some lightning. I let its fingers put me back to sleep.

I have never known what to do with a sick relative (take the body, wrap it in canvas). My cousins who never seemed to grow any older held a funeral for their dog, I think. Or some sort of reptile. They wrote a speech in wobbly print, dropped a few all-encompassing tears on the lined and torn paper, dug a hole under their tree with the toxic white flowers opening down like mouths, then washed the dirt out from under their nails. They put the tank on the curb, so I guess it was a reptile after all. I appreciated this mature token of theirs. Either they were giving up on ever getting a new lizard or refusing to overwrite the old sacred spaces with new memories and creatures. I took the heat lamp with me after the dreaded affair, plugged it into an outlet by the foot of my bed, and turned it on during the winter to warm my feet.

A man in a wheelchair lived across the street from me. They were renovating the house next to his. Each morning, he rolled himself down his ramp, and sometimes I was there to see it. He made his way to the lawn of the house next door and sat there until dusk watching the construction men work. Occasionally they let him glue a pipe or hammer in a nail.

I was stabbed in the shoulder by a man who was after my purse. I told him I would give him everything. But as I was handing it over, my purse with its rosettes lining the lips, he jumped forward. He was so gentle, though, that the three-inch blade only made it a quarter inch in. The emergency room doctor wasn’t even sure he wanted to use stitches. It was less of an event, I told him as he grudgingly placed a few threads in me, than the time I’d broken a glass in my hand. I’d been making iced tea and the temperature change made the glass shatter in on itself.