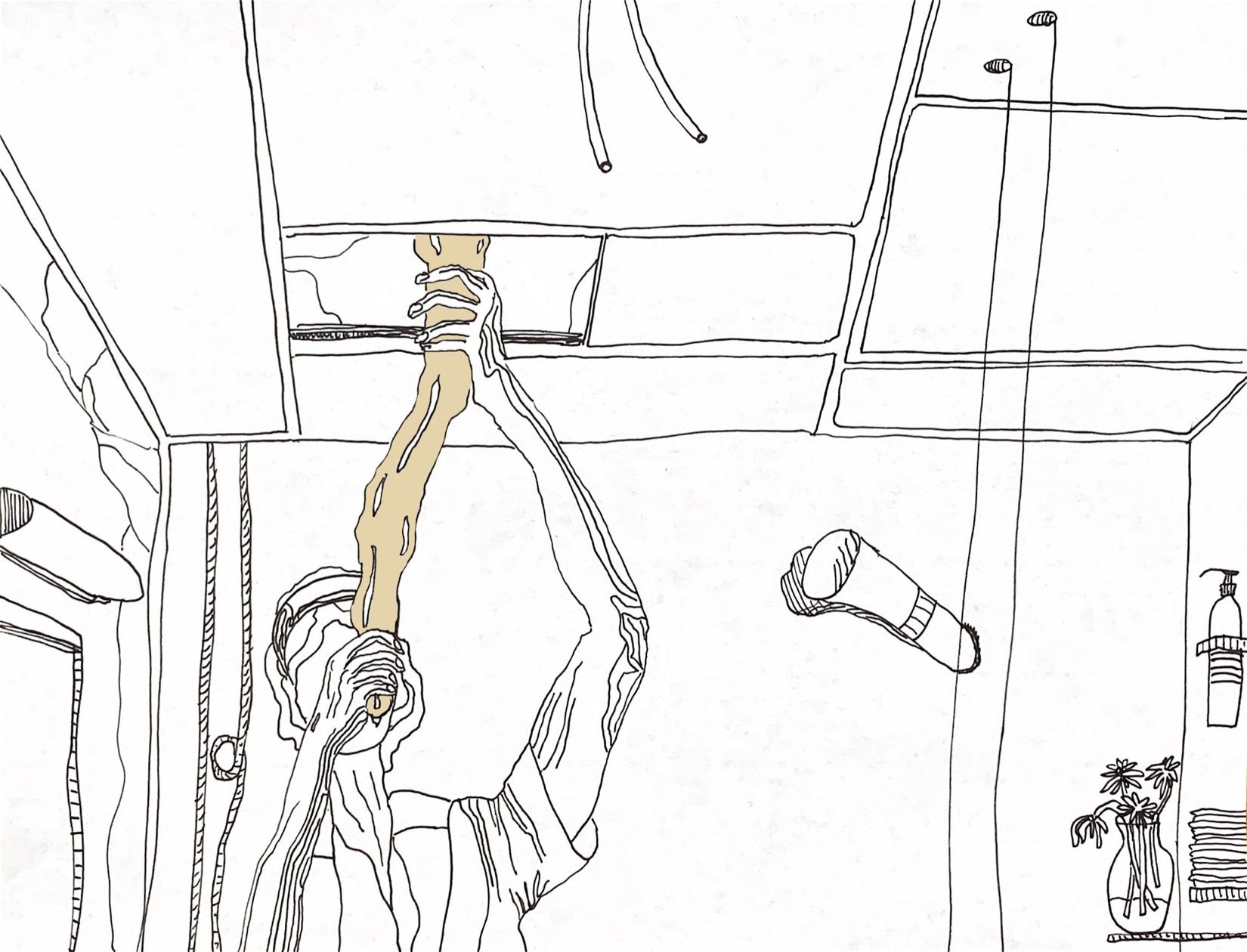 A kneaded piece of dough slides through a hole in the wall. Flattened bright-red fingernails are flattened. Human tears drip through an opening in the floor and evaporate into sweat.

Artist Mika Rottenberg features these images in the assembly lines of her surreal, provocative short films. Rottenberg, widely acclaimed in the art world, currently works out of New York City, where she recently had a solo show at the New Museum. Now 43, Rottenberg was born in Argentina and raised in Israel by parents who were involved in the country’s labor movement. Likely inspired by her upbringing, Rottenberg’s work addresses themes of labor and consumption through a Marxist lens. She has been transparent about her inspiration, explaining to Border Crossings magazine that “the whole body of work started when I was reading Marx.”

I was first introduced to Mika Rottenberg by a sculpture professor last year, who told me that she understands Rottenberg's videos to be sculptures that the camera moves through. I gave her videos a watch. Their absurdity made me laugh. I was drawn to her beautiful, disturbing fictions, interested in all the images of labor, but left confused by the fruits of that labor.

A typical Rottenberg factory plays out in her seven minute video-loop titled Dough. Women knead a long piece of dough, feeding it through holes in the floors and roofs of small, claustrophobic rooms. One woman rotates a lever, powering a fan that sits behind a vase of flowers. The fan blows pollen from the flowers toward another woman. This causes her to produce allergic tears, which drip down her body and through a hole in the floor. That hole leads into a lower level room where the tears are fed through tubes and evaporate into steam. This causes the dough to rise. Together, these women form an assembly line, with its traditional features of repetitive, individualized, and monotonous tasks. By the end of the video, the combined, uniform labor of the women produces tightly packaged, tear-risen globs of dough.

But in many ways, Rottenberg’s videos are far from the assembly line. The camera shifts between rooms and intrudes on bodies. The scale of both the rooms and the bodies is out of whack. The imagery, and what it implies, is otherworldly. Rolls of fat on people’s bodies become luxurious folds of fabric, and the camera seems confident that there is nothing strange about these shrink-wrapped, tear-embedded pieces of dough. Every frame spills over with detail, and colors deviate from the soul-sucking blues and grays of traditional factory depictions. Rottenberg’s refined palettes consist of beiges, as in Dough, and pastels, as in Mary’s Cherries. She does not fabricate dull, mechanical, fluorescent-lit factories, but decorative, fantastical ones. She places the magical and the mundane right up against each other, inventing a setting equal parts beautiful and disturbing, reminiscent of both a dollhouse and a workplace.

In Rottenberg’s Rube Goldberg–like machines, human bodies do not just run the machines, but function as the machinery itself. In Dough, tears allow dough to rise. In Mary’s Cherries, a woman’s fingernail clippings are rolled into cherries. The success of the assembly line depends on drops of tears and clips of fingernails; these physical extensions are both commodified and exist as pieces of machinery. In Mary’s Cherries, food fuels the bodies, and thus the machinery. We see a burger travel along a conveyor belt for one woman to eat while she pedals a stationary bike. The consumption of the burger is integrated into the machinery, allowing for uninterrupted production. This choice reads as satirical in the current context of tech companies and their extensive dining services, where efficiency is maximized, and the line between home and office is perilously blurred. The bodily exploitation inherent in material labor is taken to its logical extreme: Bodies are machinery, and bodily parts and fluids are packaged into products. And these bodies are extraordinary ones. Among those cast in these two videos are a bodybuilder and a six hundred pound woman.

Rottenberg’s selective casting could be seen as exploitative, since she aestheticizes and profits from physical features that our society marginalizes. When questioned on these ethics, Rottenberg often points to the fact that every woman she includes in her videos already “rent out their bodies” online, capitalizing on the fetishization of long-hair or contortionist abilities. But Rottenberg’s comment is not a justification so much as an explanation of a convenient way to find and cast these non-normative bodies. The gaze in the videos is a fascinated one, a managerial stare. The camera does not capture these women fully, and is instead intensely focused on their atypical qualities and the task they perform. Perhaps these non-normative laborers stand as symbols for the disproportionate exploitation of vulnerable people—who are vulnerable not for their weight or height, but for their class, race, and age—in sweatshop labor.

In these videos, Rottenberg engages with the idea of use. In Marx’s foundational text, Capital, he discusses concepts of use with “labor-value” and “use-value.” Rottenberg’s dough holds some “labor-value,” as its production necessitates labor. But the dough lacks any apparent “use-value,” as in, tangible features of the commodity that fulfills some human want or need. While Rottenberg’s dough contains valuable material, it fails to fulfill any reasonable human want or need. And this idea of use does not exist in a vacuum. Rather, it is socially and economically constructed. The concept of use is complicated by who and what our society finds useful, in terms of consumption and capital. This forces the idea of what is useful towards just that—consumption and capital—and away from creativity. In that way, regular dough fulfills the human want to eat bread; it logically holds more “use-value” than a piece of dough soaked with tears and sweat.

Productivity adds another layer to the concept of use, taking account of efficiency too. Marx points out that productivity depends on the “values and interests people have.” These non-normative bodies are cast as unproductive in our broader social context, considering the collective “values and interests” placed on conventions of beauty and desire. And these female laborers seem to also be cast as unproductive in the context of the factory, with their ‘excessive’ height or weight requiring additional accommodation.

Rottenberg’s camera capitalizes on these bodies that are regularly cast as unproductive. And the performance of these workers is sanded down to individual tasks. These tasks do not maximize the functions of the body, inasmuch as the smashing of a fingernail does not make use of the strength of a bodybuilder. The intense interest and disgust that the gaze of the video displays toward bodily excess appears to be grounded in a similar capitalist logic that is, at times, subverted in her videos: We are supposed to be disgusted by that which is not useful. While Rottenberg’s work investigates the relationship between the laborer and the factory, it also explores the relationship between factory and the idea of use.

What is most suggestive about these assembly line scenarios, for me, is the uselessness of the objects that are produced. What purpose does a vacuum-sealed and tear-risen glob of dough serve? Or red fingernail clippings molded into maraschino cherries? Rottenberg’s assembly line characters work tirelessly—biking, crying, kneading, cutting—to produce ultimately inconsumable items.

So I wonder why she fabricates factories for futile products. Perhaps in a world where it is ordinary for a six-foot-nine woman to retrieve a piece of dough entering the room through the roof, it is also ordinary to go to your nearest convenience store and buy that ingestible but likely sickening tear-embedded dough. Maybe these strange commodities are on par with the alien aesthetics of her set design. Maybe these products could be read as practical in the world to which this factory belongs. But Rottenberg does not just create aesthetically strange parallels to the traditional images of sweatshop labor. It seems that these dysfunctional objects say something about the idea of use itself.

While Rottenberg’s assembly-line products seem utterly inconsumable, the productivity of these laborers is pushed to an extreme. They become more machine than human. They don’t even have time for lunch breaks. But these overworked laborers seem to subvert the dough’s “labor-value” with their production of objects that contain no “use-value” at all. In Capital, Marx explains that “all commodities are merely definite quantities of congealed labour-time.” Though Rottenberg identifies as a Marxist, her laborers seem to satirize, or even oppose, this Marxist claim that the more labor it takes to produce a product, the greater its value. The kneading of the dough may be seen not just as an act of industrial labor, but considering the dough’s ultimate futility, as dysfunctional labor too. Alternately, the kneading of the dough could be seen as an act of artistic labor, and the packaged tear-embedded dough as an art-object. In either case, these laborers’ joint production counters the very reason they are meant to be there.

Rottenberg’s industrial spaces are decorative. The vase of flowers in Dough appear to exist both as décor and for its pollen, and in turn, the production of tears. But the flowers prove to ultimately have little use in both of their supposed purposes: as ornament and as a tear-generator. In this way, Rottenberg plays with function in a Goldberg-like conception, producing that which is ultimately “dysfunctional” again.

This simultaneous subversion, rejection, and embrace of ‘use’ has other layers, too, extending to the exhibition spaces of her videos. With her video Tropical Breeze, for instance, the screen is surrounded by cardboard boxes. Others of her videos have been presented in factory-like alcoves, taking the viewer out of the crisp-white gallery walls and positioning them in a space more reminiscent of that which appears on the screen. These cardboard boxes, which are conventionally useful, are deemed useless in the traditional sense in the art-space that is the gallery.

Rottenberg forces these labor forms, industrial and artistic, to rub up against each other in other ways, too. Her assembly lines are aggressively physical, relating to the physicality of art-making itself. Both forms of making involve repetitive acts of manual, alienated labor, making use of the body and its capacities. But the geographic, racial, and class borders divorce the two, and the conditions involved with each makes their comparison nonsensical. Art is often dependent on ideas, encouraging individual thinking. Industrial labor maximizes efficiency, rejecting ideas and thinking on an individual level, alienating people from their humanity, vitality, and individuality. Art tends to differentiate people from machines, while industrial labor tends to reduce people to machines. Rottenberg brings these labor forms—artistic and industrial—close together, but does not suggest any equivalence between the two.

With these beautiful, funny assembly lines, Rottenberg comments on the many layers of use and consumption in factory, art, and body. She suggests that art is often interested in uselessness and capitalist consumption is often interested in usefulness. The bourgeois art world, and its conceptual art movement, has long been interested in ideas of use. An absence of “use-value,” even if that absence is contingent on its position in a gallery space, distinguishes consumer products from art objects. That is what makes Duchamp’s Fountain a readymade art-object, and not just a urinal. But Rottenberg is defiant in conflating the usual boundary between processes of creation and conceptual-art objects. Her work is unruly in its absurdity, and for just how bizarre it seems that someone can make their living off of the production of these surreal videos. Rottenberg shows us that art itself is capable of rebelling against obsessively profit-oriented concepts of consumption.

ALANA BAER B’22 can finally admit that she likes to cry into globs of dough.