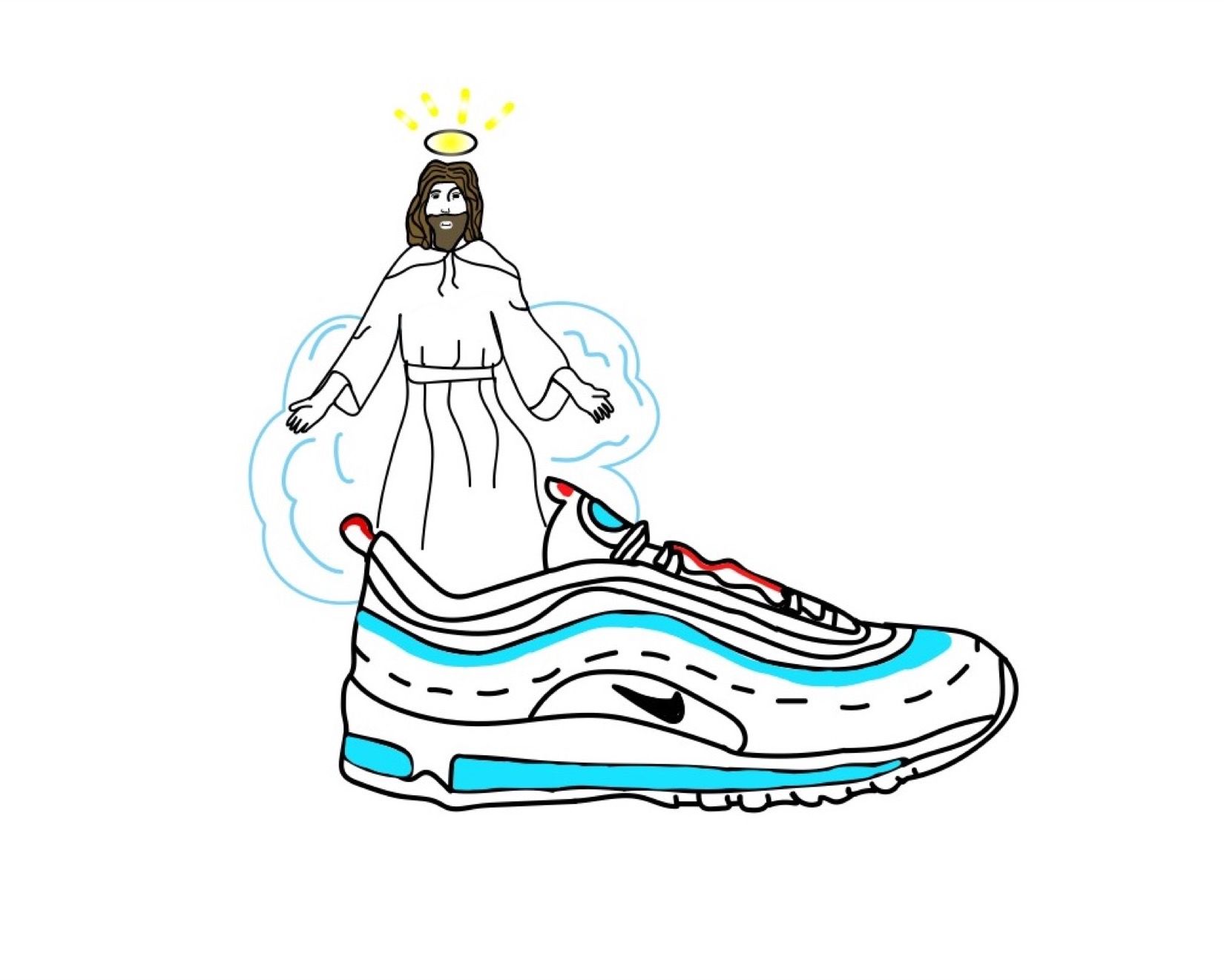 Last month, a pair of sneakers embedded with vesicles of holy water sold out within minutes of its release, despite retailing at a steep $1,425. Dubbed “Jesus Shoes,” the modified Nikes are purportedly a collaboration between Brooklyn creative agency MSCHF and INRI (Iesus Nazarenus, Rex Iudaeorum, or Jesus, King of the Jews). Beyond enabling wearers to walk on water—which MSCHF asserts is sourced from the River Jordan and has been blessed by a priest—the shoes come with Frankincense-scented insoles, a golden keychain depicting the crucifixion, and a box bearing an altered papal seal. “MT. 14:25,” or Matthew 14:25, the Biblical verse in which Jesus walks on water, is fashionably imprinted in tiny lettering on each of the sneakers.

MSCHF’s past work includes “Late Night Snap Hacks,” a website that posts to a user’s social media accounts at night to fabricate a rich social life, and “Times Newer Roman,” a version of the classic font that is 10-15 percent wider in order to increase page count. Most recently, MSCHF released an app called “Bull & Moon” that recommends portfolios of financial investments based entirely on astrological data. “Jesus Shoes” share this sense of irony, treading a fine line between critiquing and exploiting the profitability of Christianity in late capitalism. Last week, Drake posted a video of his own pair on his Instagram story. Consisting exclusively of him sloshing the water back and forth with no narration whatsoever, Drake’s video seems to border on a religious ritual. Celebrity adoption is a testament to the way prohibitively high pricing and excessively corporate marketing limit the accessibility of these shoes.

After selling out, the modified Air Max 97s (a shoe that typically retails for $160) soon rose again on sneaker reselling sites, where prices average above $2,000 before tax and tithing expenses. On October 20th, a size 15 pair went for $4,899, proving once and for all that men with large feet will stop at nothing to show just how big their cross really is. These high prices are representative of a broader trend of ludicrous limited-edition sneaker resale prices. For example, the Nike “MAG” self-lacing sneaker, modeled after Marty McFly’s shoes in Back to the Future II, fetches $28,000 on average. StockX, one of the largest online sneaker resellers and the primary marketplace for purchasing flipped “Jesus Shoes,” capitalizes on this phenomenon by offering stock market-like graphs of buying trends and variable pricing based on market demands. At press time, StockX rates the volatility (the shoe’s predicted price deviation) of “Jesus Shoes” at 41.0% (for comparison, Apple stock over a similar period has a volatility of 0.19%).

In a press release, MSCHF explains: “The Vatican has mad style if you really look at it—dope engravings, crazy hats, everything blinged out with gold—so we wanted these shoes to allude to that.” Indeed, the release of the shoes comes at a moment when high fashion and popular culture are increasingly incorporating Christian iconography. Last year, the Met Gala theme “Heavenly Bodies: Fashion and the Catholic Imagination” inspired attendees to wear outfits that playfully combined (read: blasphemed) various religious symbols. For example, Rihanna showed up in a minidress and a bedazzled, miter-like headpiece. More recently, Kanye West graduated from lyrically imagining himself as God Himself to running “Sunday Services” complete with Bible readings and a live choir.

In the Gospels, Luke quotes John the Baptist as saying, “I indeed baptize you with water; but one mightier than I cometh, the latchet of whose shoes I am not worthy to unloose” (Luke 3:16, King James Bible). We at the College Hill Independent humbly acknowledge that we too feel unworthy of loosening, wearing, or, for that matter, even bidding on the “Jesus Shoes.”

RODENTS IN CARS GETTING FROOT LOOPS

Perhaps responding to the huge social crisis of rat mobility, researchers have finally taught rats to drive tiny cars. Scientists at the University of Richmond trained rats to navigate around using little mechanized food containers as cars in exchange for Froot Loops. The act of driving, these scientists discovered, has the positive effect of reducing the rats' anxiety levels.

The tiny rat-mobiles are made of old plastic containers with little controllable motors. When the rats reached five months old—four and a half for a learner’s permit—researchers introduced them to the cars. The Richmond team spent weeks teaching the rats how to operate the cars via a little copper bar that they could press to move forward, backward, and turn. After their drivers ed course, the subjects and their cars were placed at random locations within a habitat, with the goal of obtaining strategically strewn Froot Loops in their environment.

Study author Kelly Lambert stressed how the connection between rats and humans is such that a study like this is useful for understanding human behavior. Of mice and men, Lambert commented to Smithsonian magazine, “The rat is an appropriate model for the human brain in many ways since it has all the same areas and neurochemicals,” adding, “just smaller, of course.”

Researchers have drawn several useful conclusions from this experiment. They first found that rats that lived in more stimulating environments had an easier time learning how to drive. According to Lambert, enriched cages, meaning habitats with moving toys of different textures and colors, improve rat “hippocampal complexity and emotional resilience.” Within this richly stimulating home life, however, the rats that learned how to drive demonstrated lower stress levels than the rats without wheels. The study did not appear to account for the effect that eating Froot Loops is also a really good stress reliever in certain situations.

In order to determine whether the rats derived any relief from their vehicular freedom, researchers looked for a specific chemical in their feces. Parsing through the rats’ emotional dump, their second useful discovery was that the driving rats had lower rates of stress corticosterone and higher production of stress-relieving hormone dehydroepiandrosterone (DHEA). Apparently, four months of joyriding cleared up the rats’ shit.

Hypothesizing about why the ability to drive would have chilled out the rats, Lambert commented that it was likely an increased sense of control over their own environments. Her team found that the cereal commute gave the rats “something like a rodent version of what we refer to as self-efficacy or agency in humans.” The connection to humans is more complicated than just saying driving and Froot Loops heal the soul, though both definitely have their place in mental health care.

Commutes in the United States definitely don’t relieve stress, regardless of how happy these hamster-adjacent drivers seem to be. In point of fact, Scientific American claims that every minute of a commute directly correlates to more health problems related to physical and mental degradation. However, if a loosely applicable takeaway is to be drawn here, the freedom appeared to be valuable to the rats, even in their highly controlled lives. The act of driving itself, whether by wheel or copper bar, is only the vehicle for the true stress-reliever at work here: autonomy. The rats with more tools to control their environments emerged happier, like people. But smaller, of course.

The Indy would like to add that, as an additional stress-relieving element of this study, watching videos of the rats controlling their tiny cars is also delightful and calming.