When Nezha Fell From the Sky 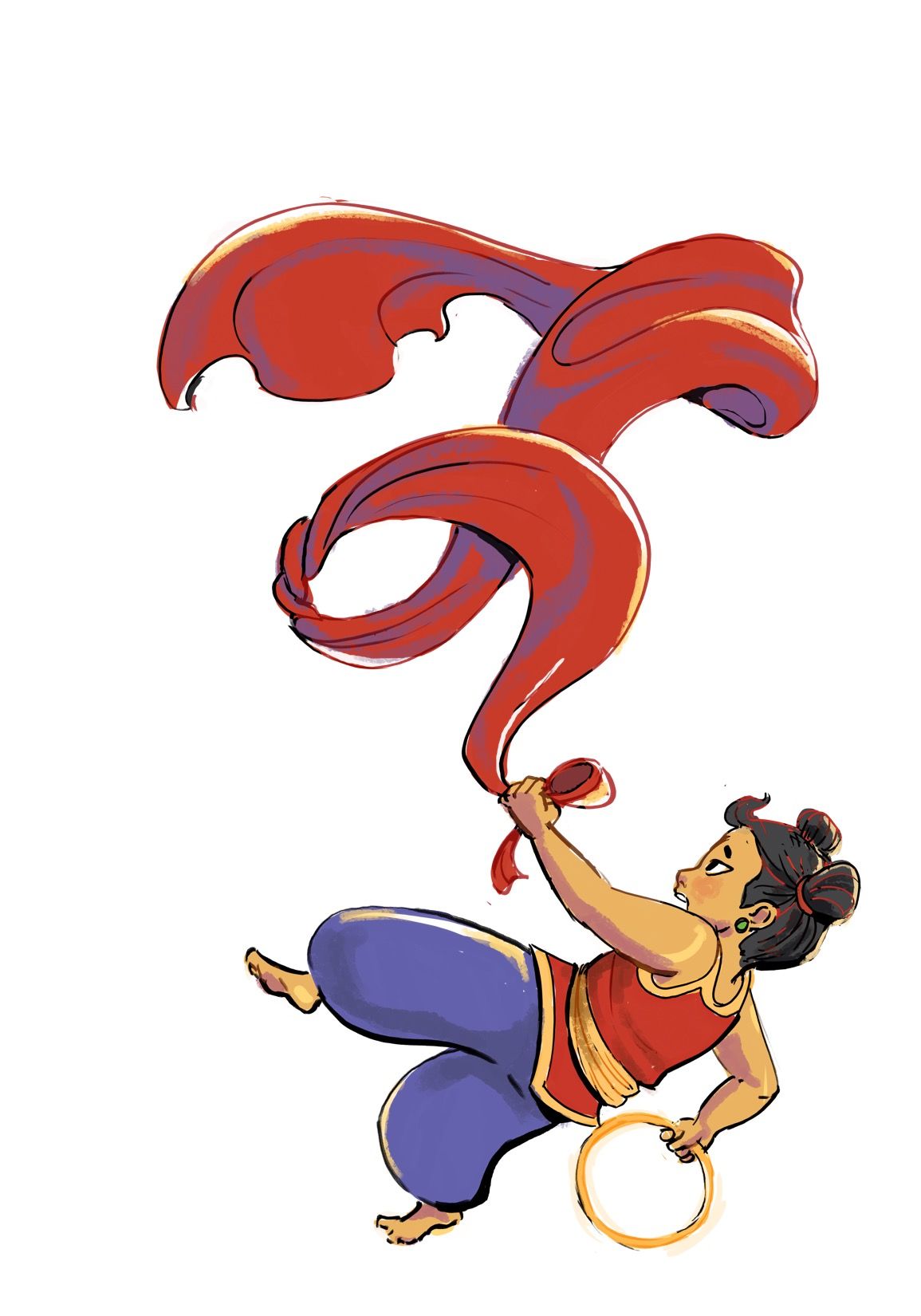 In my childhood, I watched Nezha. It was an animated series based off the Chinese myth of a boy named Nezha. At the beginning of every episode, a theme song played. This is how I first met Nezha. This is how I will meet Nezha now. Each section of the essay starts with a verse from the song.

There are not many words to describe the past in Chinese. When it is necessary to speak of the past, we say 一段时间. I began writing this when a new movie on Nezha came out this year. It has been 一段时间 since I last watched Nezha, since I last spoke Chinese.

The song opens with let us speak of a legend. It was unclear to me whether 段 referred to the past or the legend. After a while, I realized that the distinction between the two made them the same.

段 is the same word as parts, apart, breaking.

These words speak of a family.

This couple gave birth to a 怪娃娃.

When I was five, the same age as Nezha, my mother would do my hair. Nezha was the only character I watched with hair like mine—dark, straight, stubborn. Though Nezha lived in the Shang dynasty, I asked my mother to make my hair into buns like theirs. The buns had to be constructed symmetrically and rose from my head like horns. Sometimes, I would make her redo them, to make sure they rose distinctly. I was not to be mistaken for an alien. I was Nezha.

I cut my hair in third grade. By then, I had realized that Nezha was a boy. My mother would make a point to smooth what was left of my hair, to tell me I looked a 娃娃. I had taken a large 段 of my hair. It would be years before my mother could tie it again.

Once noticed, gender surfaced everywhere. In the tips of my hair, in fabric, on the playground, in the words we held. My mother told me it was 怪 if I played with boys. I wanted to show her I was anything but, that I was the 娃娃 she wanted. When she chose my outfit in the morning, I picked the option with dresses. I felt this was forgivable, for Nezha wore a dress.

Our mothers wove dresses, ribbons, bindings into our hair, our bodies. We were 娃娃 to be positioned and dressed with care. We were 怪 and watched for something strange. We were 怪娃娃 to everyone, to ourselves.

I had to call my mother to understand this line. She taught me ways I could find the meaning of unfamiliar words.

Chinese characters can be split in half for understanding. The left half tells us how to read the character, while the right tells us to sound the character. As with any rules in language, this is broken and often, without reason.

I tried this with a character that had slipped away from me. I noticed the left half of 冲 resembles 氵. The droplets signify that it comes from the family of water characters. This family held characters I could hold still in my hand. I knew 海 was ocean. That to describe it, I could use other members of the family, like 深 or 清.

The right half of 冲 was 中. I knew how to pronounce this character, because it is the name of China, of the family I hold close to me. It is also the word for center.

I give these pieces to my mother. She tells me that 冲 means washed away.

Nezha never wore shoes. He touched the world the same way he met it. When his brothers forbade him from playing with them, he stepped into a courtyard, where he found one of his greatest companions, a small pig bear. The creature was not afraid of him when he saw that Nezha’s feet were dirty, covered in willingness to listen to the earth. Like the earth, Nezha occupied the capacity of multiple states. With friends, he was like mud, mischievous without consequence. With enemies, his stubbornness hardened. When the emperor’s guards came to imprison his parents, he stepped on their feet until they groaned loud enough that the heavens could hear.

On Nezha’s third birthday, his teacher gives him a mount. With his teacher, the mount is a plump flying pig. With Nezha, it becomes 风火轮, wheels of fire under his feet. The mount transforms to suit the likeness of its owner. The smoke, the light, the anger drives him to the skies. At least in the clouds, he cannot see the disappointment of his parents. They do not want him to protect them. But every moment he grows older, he flies closer to danger, closer to his destiny.

When I watch Nezha fly, I understand why 飞 cuts through the air. Flight requires the precision of a dagger, beginning with the point of feathers. I ache to drink in the blue, to belong to the wind. But more than anything, I want to understand how to be unbounded.

When the gods first give Nezha 乾坤圈, it looked like a large ring. He carried the weapon as you would a frisbee. It was in the air more often than it was in his hands.

In battle, it was always Nezha’s first choice. Before being thrown, 乾坤圈 would light up, as if taking a breath of Nezha’s life. When it met its target—the neck of a dragon, the body of a panther, a stubborn boulder—it chimed. It had a sound like all the wishes being granted in a fountain at the same instant, the coins burning dry.

When I don’t know words in Chinese, I look at their shape on the page, how they fly through the air. The character for 护 resembles a house. Although the roof is thick, there is a single wall that slopes outwards like a cape.

For a long time, I imagined 护 to be a blanket. It gathered surrounding words under its roof. They would come and go when the meaning was right. Others would slide off the roof, tracing where it met the sky, the world beyond.

In the air, 护 sounds like an umbrella. It unveils a silence that has an interior.

This is how I arrive at the conclusion that 护 means to protect.

Nezha’s other weapon was 轩辕箭. It was a ribbon of red that he handled with softness. Whenever Nezha fell from the sky, 轩辕箭 would unravel from his shoulders. It would extend like a hand of red, for him to grasp.

This year, when Nezha was revived for a movie by a Chinese director, I was skeptical. I no longer knew what I needed to hold onto. For weeks, I deliberated if I should watch the movie. Would it pull me back into the story? The language? What did I need the movie to save me from?

The movie was only showing in East Providence, at a time of night when there were no buses. I went on the last weekend it was showing, alone. I didn’t expect it to hold out a 轩辕箭 for me.

In the car on the way to the movie, I held in my mind the things I had left. I remembered how Nezha’s brothers practiced swordplay without him. Nezha snuck into the armory to find a sword, to hold something stronger than they could. He found only a bow that had been passed down through his family. The first two arrows landed leagues away—on the forehead of an emperor, the whiskers of a sea dragon. His father found him before he could let the third one go. Nezha shaped the course of history, without the knowledge of his own family’s history.

At home, scooping up family photographs or Chinese books, I knew that asking questions was a dead language. I did not know if my mother did not want me to understand, or if she did not want to remember. I was aware of what was visible—this face that looked like my mother’s, this character that looked like a bird, but heavier. I am not afraid of the words that my parents buried. I am afraid that they will grow into a sound that no one remembers.

When I pulled myself up trees and over rooftops, I knew what scraped me raw. The sky did not seal away its color. When it bruised violet or laid stripped with red, I understood at least there was blue underneath.

Nezha’s parents never told him of the bow. He split open the sky, their love, trying to find the sky underneath. There are no words for a memory that you do not have.

I sent a picture of these characters to my mother. She replied with an audio clip in English.

My Chinese could fit in a fountain. When I’m at school, the fountain dries up and you can see what words I have left. Sometimes, it swells with the words I find in a TV show or cartoon. I am certain that if you were to comb through the water, it would be filled with the remnants of Nezha’s battles. You might find the sparkle of the northern sea pearl he stole from the dragons. If you put your hands in the water, you might feel the warmth of the phoenix that Nezha freed so it could go back to being the sun. And if you put your ear close to the water, you might hear whispers of the battle cries I learned.

If asked to describe this sentence, I would say that horses run with wind under Nezha’s two feet. Making sense of this is difficult, so I will exchange these words for what moves in the animation, in the movie, in the copies of Nezha that breathe.

Nezha’s power is large—in the skies above, in the oceans below. 本事 is part power, part skill, part hard work. When I reach the end of my wits, hope, perspective, my mother asks me to give 本事.

It is important to remember that the ocean is an old dragon. With each stroke of its salted, white beard, it dreams of swallowing the earth. The sun is just a phoenix, who enjoys napping in the forest at night as much as burning the sky by day. Its rest is as important as its rise.

The work of remembering dreams is using 本事. When I reach a stone I cannot move, I remember the ocean or the sun. With the hand of water or light, they would wave it possible. The stone can be rolled over, sliced open, melted. I must learn how to use 本事 to shape the earth on my own terms. When I grow tired or frustrated with the edges of my 本事 I remember Nezha. Before his master taught him anything, he asked Nezha to build a tower to the skies using only stones. I remember that even the path to the sky is finite.

The only characters I recognized from this verse were 千 and 魔法, a thousand and magic. This time, my mother described the unfamiliar characters with other Chinese characters over the phone. She filled them in with words that she knew I hadn’t forgotten. I wish I had pressed record.

I have these now: magic, thousands of fights, ceaseless.

If you asked for their name…

STAR SU B’21 is looking for a red ribbon.