The Power of Poultry 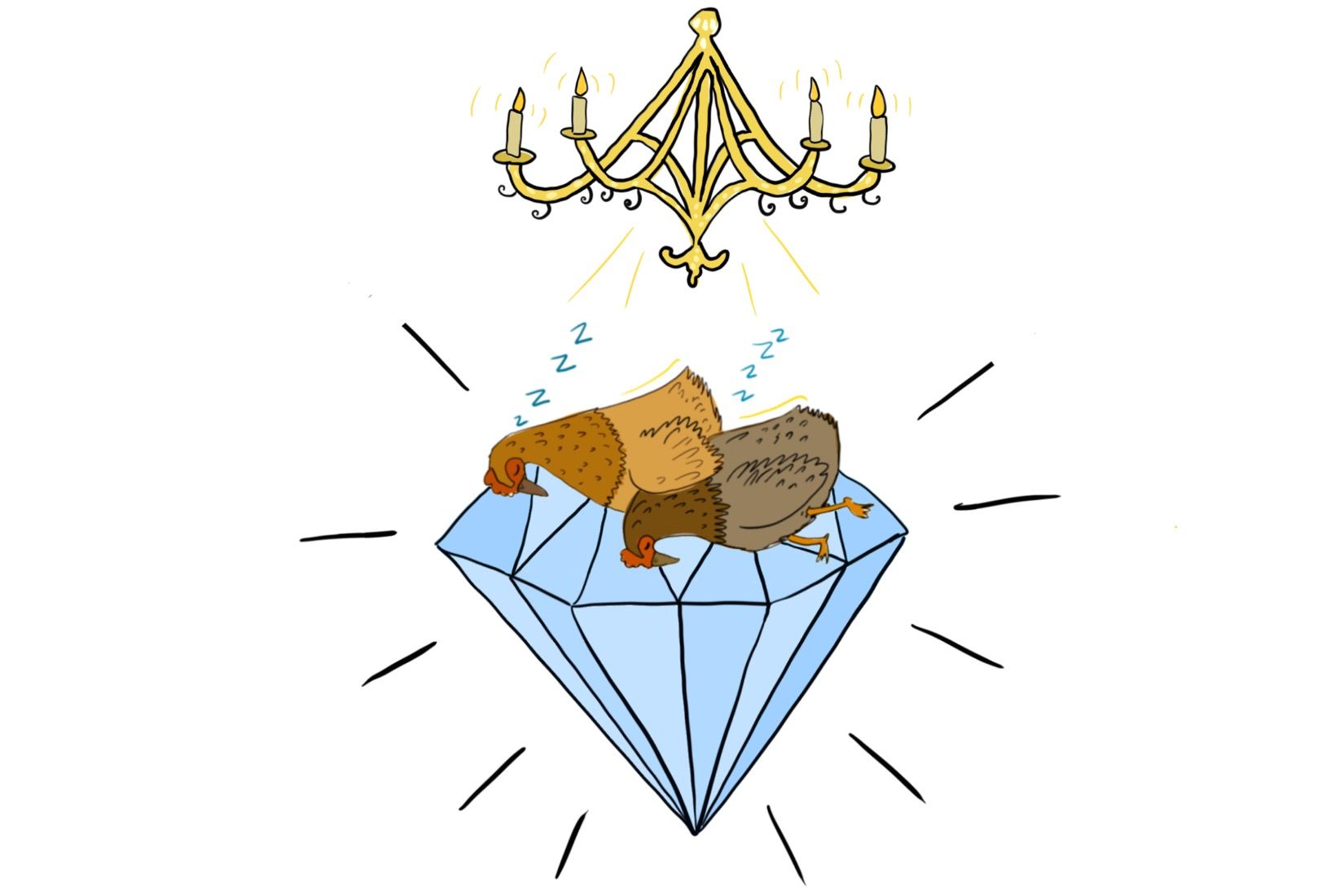 Ginger is eight years old. She’s survived two dog attacks, confrontations with a deadly ferret, multiple aggressive raccoons, and a hawk. I like to think her longevity is a product of her (relative) smarts and my family’s vegetarian diet. Chickens are often a topic of conversation in our household; for the past eight years, we have had between three and six at any given time. They eat mainly kitchen scraps, grass, and insects and are locked at night in a coop my dad built with some extra glass blocks and recycled wood. Throughout the day, we watch them play and hunt in the backyard. Each week, they lay between 10 and 24 eggs, which we happily consume or sell to our neighbors for two dollars a half-dozen. While the eggs are a bonus, our chickens function more as pets than as livestock, many responding to their names when called. My family isn’t alone in our chicken admiration: A USDA study from 2013 estimated that 0.8 percent of US households have backyard fowl—meaning that roughly 1,020,700 households in the United States own chickens. For some families, these chickens do much more than just lay eggs.

In the past century, the role of chickens in the United States has changed dramatically. Throughout the early 1900s, chickens were mainly raised by poultry farmers who sold eggs as their primary source of income and treated meat as a rare and expensive delicacy. This changed mid-century when new industrial agricultural technology collided with the US government’s push for “Victory Gardens” during wartime rationing. Chickens were suddenly introduced into the backyards of many new small-holder family farms, not just larger industrial producers. Since the turn of the century, the function of chickens has shifted again, as they have become a luxury status symbol for many wealthy and upper-middle class white Americans.

While these California chickens with gourmet diets and luxurious abodes are an extreme example, there are many chickens that live less lavish lives, but are still used mainly for decoration or entertainment. Even more are primarily a food source for their families. Although Ginger certainly does not live in the lap of luxury like some Silicon Valley hens, she is more a source of entertainment than protein, helping out as a gardening companion (worm-eater) for my mom, and running energetically across the yard when called. The rise of backyard chickens is driven by both families looking to benefit from a practical food source and families looking to ornament their backyard. Why has this dichotomy emerged?

As affluent people continue to move to cities and organic food emerges as a status symbol of choice, backyard chickens have become a surprisingly effective way to signal urban wealth. While the chickens themselves are not particularly expensive (a mail-order chick can be purchased for around $3, shipping included), the space required to house them, especially in urban areas, can be very costly. Owners also benefit from the lingering reputation of chickens as a functional farm animal, softening their status symbol to something that also projects liberal ‘progressive’ values. For those who fear that their address is not sufficient to mark their brood as a luxury good, the embellishments of the Silicon Valley cohort serve to mark the distinction.

Part of the explanation for why Silicon Valley has become such a backyard chicken hub can be found in the tech industry. As modern technology increasingly pervades most American’s lives, the elites of the industry have begun to take steps back, valuing disconnection from the very goods they have created, even as such a separation becomes more and more impossible. Here backyard chickens serve as a living, breathing reminder of the “real world.” One Google employee noted in the Washington Post article, “It’s a fascinating thing to sit and watch the animals because instead of looking at a screen, you’re looking at the life cycle.” Silicon Valley tech jobs are an ideal setting for the rise of luxury chickens to counteract feelings of isolation and technology-overload among workers. As tech companies increasingly gain a reputation for exploitative practices and politics, backyard chickens allow for a progressive lifestyle “detox” for tech workers, often in the name of authenticity—romanticizing a rural working-class lifestyle only accessible to the white and wealthy.

The trendiness of backyard chickens also has deep connections to the increasing popularity of organic and farm-to-table foods. Although organic foods have been growing in popularity for decades, in recent years, companies like Whole Foods have begun to market them as a moral necessity. By limiting the amount of chemicals used, organic food can minimize the pernicious effects of farming on surrounding ecosystems and farm workers. Organic food also allows a mostly white and upper-middle class consumer base to, in effect, purchase a reprieve from climate-based guilt by using their money to buy the more expensive foods. Backyard chickens are an even more extreme example of this—though at first glance the archetype of ethical food, the sustainability factor of their eggs drops off rapidly when, for example, the chickens are fed gourmet salmon meals.

As the wealthy increasingly value disconnection and organic becomes their status quo, backyard chickens are an easy way to signal a desire for authenticity, an appreciation for local food and a surplus of outside space.

Chickens are a somewhat charming example of a growing trend. While backyard chickens, tiny houses, and Instagrammable van living become trendy among the wealthy, they become overlooked as decisions made out of practicality or necessity. Indeed, in a time when Wall Street executives find minimalism stylish and their teenage offspring shop at Goodwill, the wealthy increasingly fetishize the aesthetics and habits of America’s poor and middle class. Of course, the wealthy are always sure to emphasize the differences. One can expect the Marie Kondo aficionado’s closet to be empty, but also expensive, clean, perhaps coordinated. While the trendy Goodwill fanatic might brag about their affordable purchases, they would never be caught in a Ross. No one would confuse the Silicon Valley chicken coop for that of a low-income, rural family. The wealthy pick and choose their favorite habits and aesthetics of middle class and poor Americans, appropriating them and benefiting from the salt-of-the-earthiness these status symbols suggest.

Recent economic trends can help to explain these patterns. While the wealthy have become wealthier, low-income households have lost money, in large part because of policies that tax the richest Americans at far lower rates than the poorest and a financial crisis that affected low-income people and people of color the most. Compared to only 15 years ago, the poorest half of US households now have 32 percent less wealth, while the top one percent of households have more than twice as much. As inequality skyrockets in a system that only entrenches wealth disparities, it becomes more troubling that those at the top continue to appropriate elements of the lives of those in the middle or at the bottom for style or pleasure while ignoring the circumstances under which these elements exist for most. With their overalls and homemade jam, the one percent wannabe-agrarians halfheartedly conceal a wealth disparity they both benefit from and choose to ignore.

This appropriation is especially noticeable in the world of agriculture, where wealthy white Americans increasingly romanticize farming and their roles as ‘stewards of the natural world.’ Ironically, these very ideals around farming can in fact lead to less efficient and sustainable farms. The article “Stop Romanticizing Farms” in Modern Farmer points out this contradiction, writing that “we’re incentivizing farmers to use their limited resources to perpetuate a romantic stereotype that consumers enjoy, rather than to spend money on functioning, sustainable (but perhaps not magazine-beautiful) models of local farming.” Backyard chickens as a status symbol can be seen as an extreme version of this trend, an attempt to bring the idealized farm to individual homes. In the case of Silicon Valley, chickens create an expensive and undeserved halo effect for their owners while their luxurious accommodations make them far less sustainable than alternative egg sources.

Reading these pieces in the Washington Post and Modern Farmer makes me wonder about how to think of Ginger. It seems too extreme to condemn owning chickens except in cases of necessity. While Ginger does not exist for purely practical reasons, she doesn’t live the life of a pampered Silicon Valley chicken either. Ginger—and my family’s chicken hobby—lives somewhere in between. Ultimately, the chicken isn’t the problem. But it can become one when used as a tool for disguising wealth and appropriating working-class necessities. As an ancient Ginger approaches her ninth year, she has mostly stopped laying eggs, except on days of exceptional motivation. With the rest of our flock she spends her days roaming the yard enjoying the near-constant sunshine. Our coop has no cameras or solar panels, but there is a heat lamp we turn on when nights are colder than 20 degrees, and when it snows my mom shovels paths through the yard so the hens can stretch their legs.

ANNA PASNAU B’20.5 has backyard chickens on her resume.