Week in Pulling Out 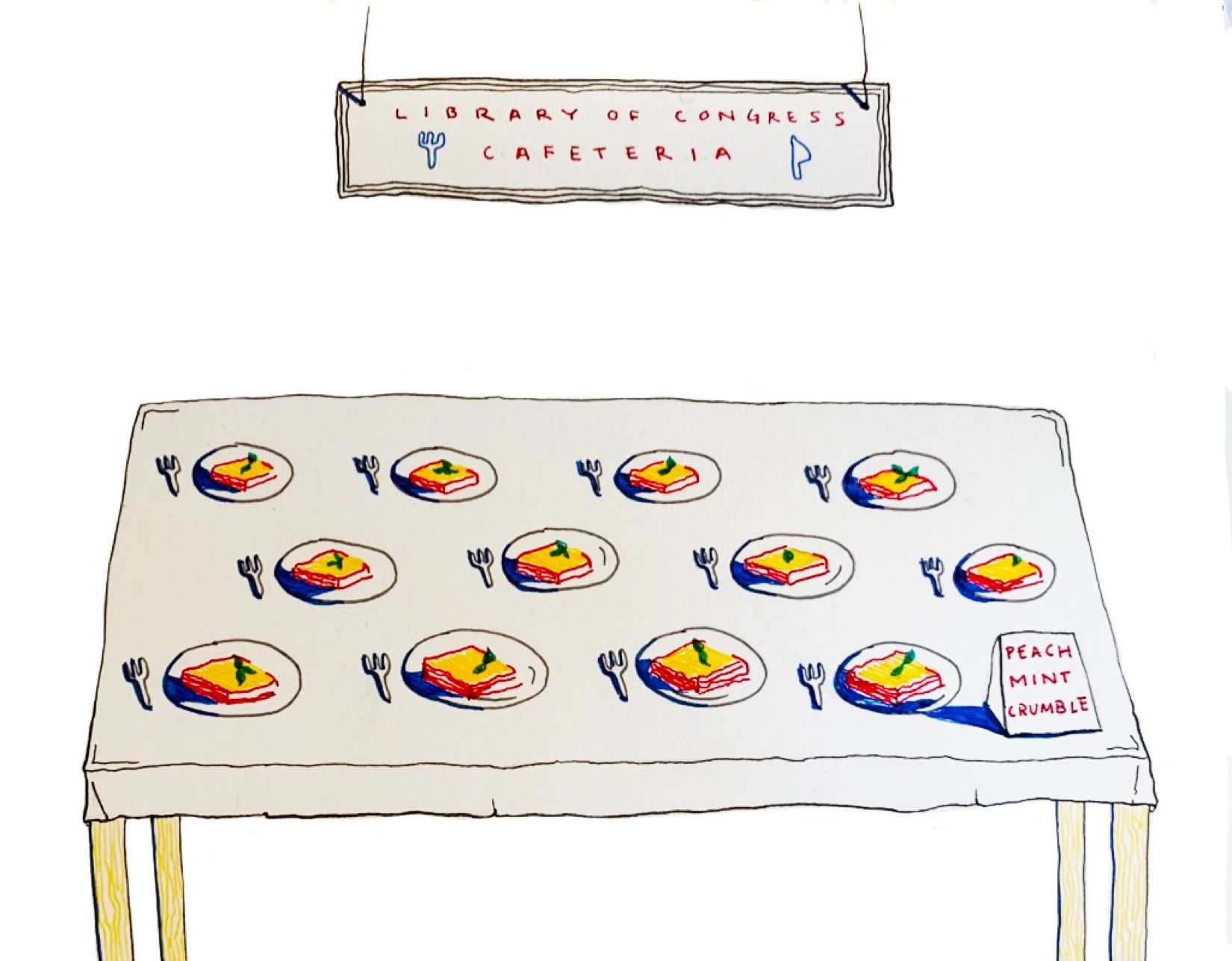 Earlier this month, NBC’s Ken Dilanian made Twitter aware of a recent addition to the cafeteria menu at the Library of Congress: peach mint crumb cake. Despite the dessert’s off-putting ingredient combination, the internet was here for it. A source sent Dilanian a picture of the dessert just under two weeks after Trump candidly confirmed that he had discussed Joe Biden on a phone call with the Ukrainian president.

Dilanian’s tweet received over 2,000 retweets and 9,000 likes. While some in the replies admitted that the joke went over their heads, and others despaired that “even baked goods are getting political,” the majority expressed heartfelt amusement. Many applauded librarians and food service workers for the subtle expression of #resistance. In the comments on Fox News’ coverage of the story, even several self-identified Trump supporters confessed that they appreciated the pun.

In spite of this popular support, the Library of Congress removed the crumbly delicacy from its offerings the day after Dilanian tweeted the photo. One can only hope that the staff had their cake and ate it too while they still had the chance. In a statement to Fox News, the Library of Congress said that its cafeteria “is managed by an external vendor which briefly offered the Peach Mint dessert. When this was brought to the attention of Library management, the item was removed.” Because it is an independent federal agency, the Library of Congress is not considered to be under the executive branch and is therefore required to remain nonpartisan.

With the elimination of the dessert from the archive, the Trump administration could once again breathe easy. While this looming threat to nonpartisanship was fortunately halted before things got out of hand, the cake situation raises the question of what nonpartisanship means in this political moment. Since taking office, Trump has made attempts to politicize supposedly nonpartisan government operations like the military, the Environmental Protection Agency, and national intelligence. Trump’s choice for the director of national intelligence, Texas Representative John Ratcliffe, drew criticism from members of the president’s own party over the summer. As the New York Times stated, Trump selected “one of the capital’s fiercest political warriors” for what might be “the most nonpartisan job in Washington.” However, when nonpartisan groups like the Library of Congress engage in sweet and harmless opposition to the president, they’re censured.

Fortunately, Trump’s influence does not extend to what the library’s staff—or any other American—eats, drinks, and smells after hours. Since Nancy Pelosi’s announcement at the end of September, a variety of ice cream, beer, tea, and candle companies have capitalized on the politically pungent flavor. In fact, the flavor was on people’s minds long before Ukraine became a part of the story—High Point Creamery in Denver released their “I’m Peach Mint” sorbet two years ago.

In the Twitter conversation following Dilanian’s post, excited netizens brainstormed courses for impeachment-themed parties. In addition to peach mint juleps, a popular aperitif was subpoena coladas. Naturally, the main course would have to be chicken Kiev. And the side? Traitor tots.

Even if the House votes to impeach Trump, removing him from office is no piece of cake. The Constitution states that a two-thirds majority vote of the Senate is necessary to convict an impeached official. In short, an impeachment does not equal a conviction. However, the prospect of finally charging the president with a concrete misdemeanor is giving his opponents the sense of optimism they’ve been yearning for since 2016. As the media and public wait for inquiry updates, many hope that bad taste is not all that the Trump administration has in common with the peach mint cake—they hope that both will be known for how they crumble.

In an explosion no one saw coming, a fire last month at a cattle breeding farm caused 100 cylinders of bull semen to blow. Heat from the fire caused the cryogenically frozen cylinders storing the semen to pressurize, forcing the lids off and splattering the contents out at high speed, according to local news sources.

Firefighters were called to the 2,700 square foot Yarram Herd Services facility, located in Gippsland, Victoria, shortly after 3:00 AM. Once at the scene, they went into “defensive mode,” forced not only to contend with the flames but also to dodge flying “projectiles” being thrown from the collapsing structure, Country Fire Authority (CFA) Gippsland commander Chris Loeschenkohl told Australia’s ABC. Nothing was salvageable from the ruins; the semen explosion left the building “completely shredded,” a CFA spokesman told the Daily Mail Australia. The College Hill Independent apologizes for the visual. It took firefighters from 10 different crews over two hours to extinguish the flames completely, ABC reported. The blaze caused thousands of dollars in damage, which Aaron Thomas, Yarram Herd Services Committee vice chairman, told Newsweek would be a “huge blow” to the local farming industry.

This is not the first time bull semen has graced the pages of the Indy. In February 2016, Madeleine Matsui reported on a heist in California in which enough sperm to impregnate 1,000 cows was taken from a lab technician’s truck. Nine months before that incident, thieves struck a Minnesota farm and made off with $70,000 of liquid gold. Bull sperm harvesting is big business in Australia, and around the globe. It is, after all, the linchpin of the dairy production industry. A cow does not produce milk unless she has recently given birth. For dairy farmers, no milk means no money. Stored bull semen has one use: artificial insemination. Methods of obtaining the goods vary, but it seems that the most common process involves a mount animal (or structure) and an artificial vagina, warmed to the temperature of a cow on heat, with a vial attached. Sperm is then stored in ‘straws’ and immersed in liquid nitrogen. Each straw holds about half a millilitre of bull semen. Each one represents an effort to impregnate a cow.

The fire at Yarram came at a particularly inopportune moment given the fast approaching artificial insemination season, Thomas said. Each cylinder destroyed at Yarram was reportedly worth hundreds of dollars, with the individual price of each straw ranging from five to 95 dollars, depending on the quality of the bull who provided the goods. The semen explosion was all the more debilitating as it followed years of drought in the Gippsland region.  In July, ABC reported that some farmers, in their third year of drought, have lost as much as 70 percent of their income due to a scarce rainfall and weeds hindering grass growth—a phenomenon known as a green drought.

Yarram has provided a range of services, including artificial insemination, calf dehorning, and ultrasound pregnancy scans, in Gippsland for two decades. According to the National Herd Improvement Association of Australia, they also supply “semen and merchandise” to “DIY operators” in the area. The Indy was unable to decipher what these “DIY operators” entail. “Servicing your needs,” reads the Yarram Herd Services Facebook page. With a persistent dry patch still in sight, the Indy can only hope that the next time Yarram shoots its wad, it aims more precisely.