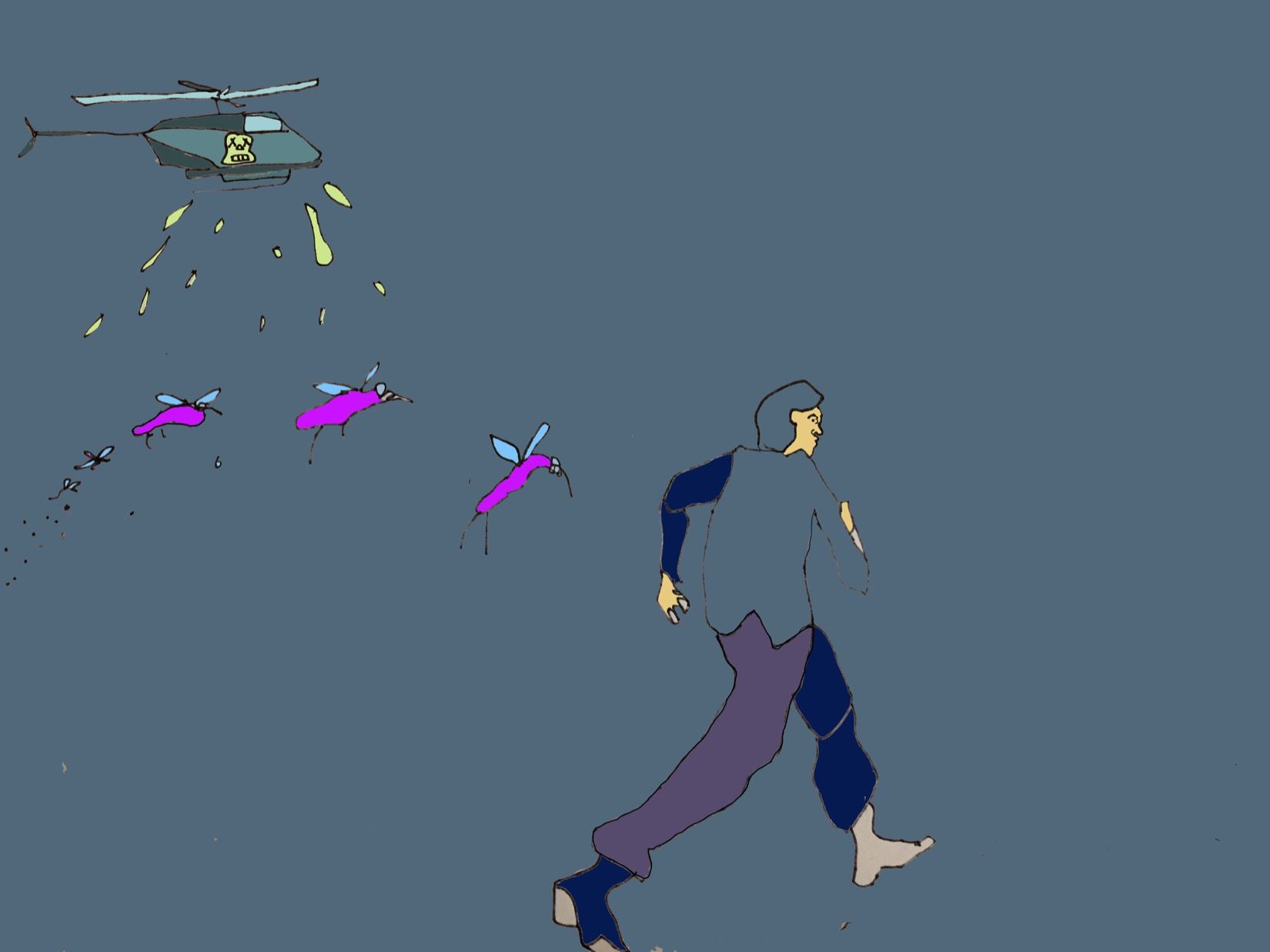 Consider this hypothetical scenario: mosquitoes carrying an infection with a 30-percent mortality rate have taken over, and you are the only one authorized to release a secret weapon that will completely eradicate them—what do you do? The knee-jerk response might be, “Blast the mosquitoes, of course!” But what about the fallout, the unintended consequences? One should try to calmly navigate the panic and fear, taking time and space to examine the repercussions of their actions. Are you willing to take a gamble on what your actions would mean for the precariously balanced ecosystems that human  survival and flourishing depend on? It’s possible that rescuing some humans from one threat could end up worsening the already dire ecological crisis that threatens us all.

Very dangerous but also very rare, eastern equine encephalitis virus (Triple E) is an infection transmitted to humans through mosquito bites. In the US, there have been more cases of Triple E in 2019 alone than in the preceding 50 years. Climate change is generally thought to be at the root of this uptick. Warmer weather delays the first frost in many eastern states, which allows for mosquitoes—who need bodies of water to reproduce—to thrive for longer portions of the year.

Triple E infections normally remain in a closed, back-and-forth loop between birds and mosquitoes. It’s only when specific subspecies of mosquitoes that bite both birds and humans becomes infected that a threat is posed to human populations. Large animals like humans and horses, unlike birds, are considered “dead ends” for the virus. In these animals, the concentration of the virus in their bloodstream is too small for a mosquito that bites them to become a carrier. That’s the good news, and partially explains why this infection is so rare among humans. However, once infected, horses have a 90-percent and humans a 30-percent mortality rate, with Triple E causing encephalitis, an inflammation of the brain. Triple E can also cause non-encephalitic presentations of the infection, or entirely asymptomatic ones. In the non-fatal cases where Triple E affects the brain, survivors are left with permanent brain damage, which can manifest as seizures, altered personalities, paralysis, or cognitive impairment. Often, these lingering symptoms, known as sequelae, kill the patient within a few years.

Mosquito breeds that bridge the infection from birds to horses are much more common than those that bridge the infection to humans, making a vaccine for horses profitable and commercially viable (one dose sells for around fifty dollars). In the 1980s, a vaccine for humans was invented by the US military to provide protection for troops and researchers. However this vaccine did not provide long-term inoculation, and because the virus is incredibly rare among humans, it was deemed virtually unprofitable and thus not worthy of production. So, although a vaccine does exist, it is not available to the general public. Instead, experts recommend an integrated mosquito mitigation (IMM) approach. Much of this approach involves meticulous attention and participation on the public’s part.

The Centers for Disease Control and Prevention (CDC)’s webpage on integrated mosquito management is broken up into subsections: conduct mosquito surveillance, eliminate places where mosquitoes lay eggs, control larvae and pupae, control adult mosquitoes, and monitor control programs. The most straightforward suggestions are to cover up, limit time outside during peak mosquito hours between dusk and dawn, use insect repellent, and keep well-maintained screens on open doors and windows.

To help inform and guide the terrified public, the CDC dedicates an entire page, titled “Prevention,” to helping the user navigate the use of insect repellents. It even offers a search tool that lets you specify the criteria you are looking for in a repellent (duration, for mosquitoes and/or tics, active ingredients), and returns a useful table. The CDC promotes caution with children: do not spray a baby under two months old; instead, dress them in long clothing and cover strollers with mosquito netting. Towards the bottom of the page, it recommends treating your clothing with permethrin, an insecticide that targets insects’ nervous systems, as mosquitoes can still bite you through your clothing. However, this preventative measure is not without its own risks, which the CDC barely mentions on its website. The National Pesticide Information Center (NPIC)’s fact sheet on permethrin is more illuminating and gives one pause when considering its use. Permethrin is highly toxic to insects indiscriminately, damaging the populations of beneficial insects such as bees and flies. Permethrin is incredibly toxic to aquatic animals and fish; it stays on clothing through multiple washes, and it is highly probable that spraying, wearing, and washing this insecticide on our clothing will negatively impact the bodies of water around us and their marine life. Additionally, Permethrin is toxic to cats, and can even be deadly for them; the NPIC warns the consumer to keep freshly treated clothing away from pets until they’ve dried. The priorities of the CDC are clear: It is a human-centered world we are living in, and we must focus on maximizing human survival at any and all costs.

Removing standing water is another effective way to mitigate mosquito populations, since mosquito larvae and pupae are aquatic. The IMM articles frequently mention abandoned tires as hot spots for mosquito breeding, as though they decorate every corner. But what to do with standing water you can’t dispose of? The CDC recommends using “(EPA)-registered larvicides according to label instructions.” If this doesn’t nip them in the bud, and the pupae mature, the next step is to apply adulticides, which kill fully-grown insects. One of the most effective ways to do this over large areas is through aerial pesticide spraying, a controversial practice most recently deployed in some counties in Michigan, where nine people have tested positive for EEE this year. Aerial spraying gives affected residents pause: What makes this airborne chemical safer for them or their pets than the mosquitoes it is targeting? A smaller portion of residents are also concerned about the effects of aerial spraying on the ecosystems around them.

Rhode Island—with three confirmed cases of EEE this year and one death—conducted two rounds of aerial spraying on September 8th and 11th. This is only the second time Rhode Island has ever opted to conduct aerial spraying for mosquitoes; the last time was in 1996. The insecticide to be sprayed is chosen by state and local officials and determined based on the results of regional mosquito insecticide resistance. The amount being sprayed is often minor enough, at generally one or two  tablespoon per acre, that officials claim the spraying should be harmless to humans. The CDC writes, “If people prefer to stay inside and close windows and doors when spraying takes place they can, but it is not necessary.”

However, beekeepers are especially wary of aerial spraying programs. The insecticides used, although allegedly safe for humans and animals, can kill bees that come into direct contact with them. The spraying being timed at night should assist with protecting bees, as they are normally in their hives during those hours—however, beekeepers have been advised that they may want to keep their colonies on lockdown during treatment times. An unanswered, less-examined question that does not show up on the CDC’s FAQ: what happens to the bat that eats that collateral bee? Or the spiders that eat the mosquitoes? And the animals that drink the treated water? As beekeeper Betsy O’Neill mentions to woodtv, an NBC-affiliated news station in Grand Rapids, Michigan, “definitely what we want to first go to is the humans. But as humans, we need all these integral parts of nature, and it’s there for a purpose.”

What O’Neill is referencing is the myopic, anthropocentric view humans tend to take when threatened by natural forces: that the only important things are our lives and our childrens’ lives. What this viewpoint often neglects are the subtle ways in which our lives and wellbeing are predicated on the flourishing of a complex and delicate ecosystem—we don’t know what happens when mosquitoes disappear. The webbed dependency of the natural world is what makes total mosquito eradication, a process being piloted in other parts of the world, especially scary.

The long-term effects of humans playing “Mother Nature” in both the cases of aerial spraying and the release of genetically modified populations into the wild are nowhere near fully understood. The potential ramifications and unintended effects of such actions could ripple out irreparably for generations to come. We have barely scratched the surface of all the complexities of how climate change caused this uptick of virus-bearing mosquitoes in the first place. In much the same way,  we cannot entirely understand all of the long-term after-effects of the solutions and techno-fixes we employ in response to this problem. Still, the paranoia and fear around every bug bite remains, elevating what is normally an itchy nuisance into an existential threat, a fear that your days are numbered. So… do you choose to release that secret weapon? Are you sure you know all of its costs?

EMMA KOFMAN B’20 wants an anti-itch cream that actually works.